Here's some major sightings of large marine life in the last quarter of 2021. 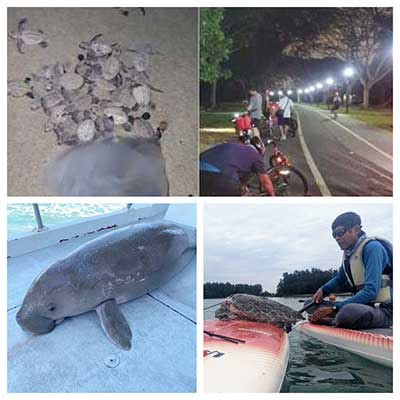 While there was sad news of a dead baby dugong, and a sea turtle that was entangled in netting (it was rescued). There was also great news of baby sea turtles hatching on our recreational beaches on Sentosa and East Coast Park. And the care taken by many people to make sure they are okay. Fresh dugong feeding trails were seen in both northern and southern shores in Dec. While a sighting of eagle ray also brightens our day. Happy New Year everyone!

Sadly, a dugong was seeing floating dead in our Southern waters on 9 Oct 2021. Shared by Robert Tan who reported that the body was being sent to the Lee Kong Chian Natural History Museum.

According to a Straits Times article republished by The Star, the museum will be working with Wildlife Reserves Singapore to find out the cause for its death. While they are known to be found in Singapore’s waters, sightings of these shy creatures are rare and scientists and marine enthusiasts often detect their presence by the trails they leave in seagrass beds.

SINGAPORE - There were no visible signs on the carcass of the young dugong found dead in Singapore waters on Saturday (Oct 9) to indicate that it died from physical trauma.

But the National Parks Board (NParks) said it is continuing to work with the National University of Singapore's (NUS) Lee Kong Chian Natural History Museum and the NUS Department of Biological Sciences to investigate the cause of death of the marine mammal.

The critically endangered creature had been found dead and floating in the waters by a group of recreational divers off Pulau Hantu, one of Singapore's southern islands, on Saturday morning.

Dr Karenne Tun, director of NParks' coastal and marine branch, said a post-mortem conducted on Saturday by NParks' Animal and Veterinary Service found no visible signs to indicate that the death of the young dugong was caused by physical trauma.

But she added: "As young dugongs are known to stay close to their mothers until they reach maturity, the calf may have been separated from the mother before its demise."

Mr Marcus Chua, a mammal researcher at the museum, said the dead dugong was male and measured about 1.4 m. Adult dugongs can usually reach lengths of between 2.4m to 4m.

Mr Chua said dugongs usually stay with their mothers and receive care for a long time.

"If the dugong had been separated from its mother, it might not have been able to survive," he told The Straits Times.

This is because dugong calves need a combination of sea grass, which is their natural diet, and their mother's milk for nutrition.

Their mother's care is also crucial in teaching them how to survive in the wild independently.

As maternal dugongs do not abandon their children, the pair were likely separated due to challenging conditions, Mr Chua said, citing possibilities such as poor tidal conditions or the premature death of its mother from other causes.

During the post-mortem, which Mr Chua had assisted on, the researchers found that the stomach was full, suggesting that it had been feeding before its death.

Further investigation done on the contents in the calf's stomach will help them ascertain the cause of death.

"Although this event is sad, finding the carcass of this calf is evidence that dugongs are breeding in Singaporean waters," said Mr Chua.

"Hopefully the findings of this investigation can better contribute to protecting dugongs in our waters."

These trails are formed when dugongs chomp up seagrasses including their roots, leaving a shallow meandering furrow of about equal width and depth.

A few furrows that appeared to be dugong feeding trails were seen on Pulau Sekudu on 6 Dec. This island lies just opposite Chek Jawa on Pulau Ubin. 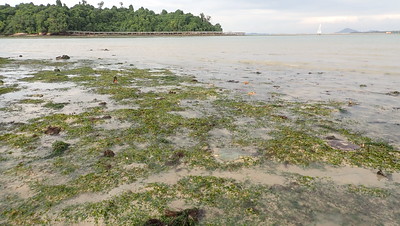 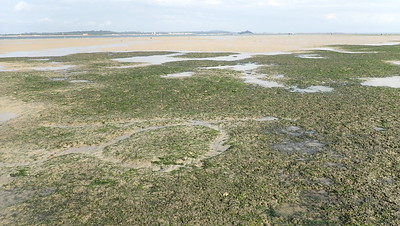 Lots of dugong feeding trails were seen on Cyrene on 4 Dec. 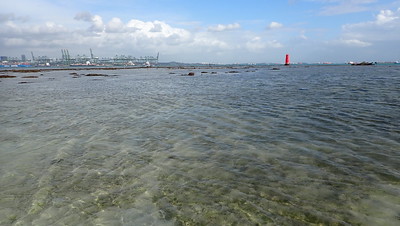 The regular team continue to see fresh signs of dugongs in our seagrass meadows.

In happier news, sea turtle eggs hatched on Sentosa. The site where the mother laid the eggs was protected until the eggs hatched safely. More in Mothership.

Debby Ng saw an eagle ray on the intertidal at a lowish tide on St John's Island on 18 Nov 2021.


The Hantu Blog shared on 27 Nov 2021 how paddlers rescued a sea turtle off East Coast that was entangled in fishing net.


Mothership shared that sea turtle hatchlings were spotted at East Coast Park on 16 Dec but heading away from the sea as they were attracted to the streetlights. Fortunately, people noticed them and rescued them and put them back into the sea. Why did they go in the wrong direction? Baby sea turtles' natural instinct is to head towards the sea. In nature, starlight and moonlight on the water would guide them in the right direction. However, in urbanised shores like ours, light from our parks, streets and other human activities disorientate them. As a result, they head in the wrong direction and usually come to a sad end. 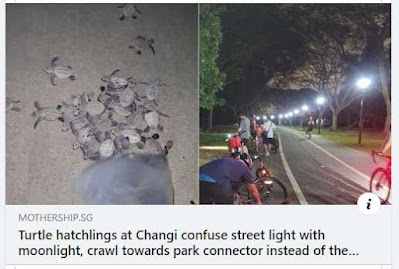 More about dugongs, sea turtles and eagle rays on Singapore shores.
Posted by Ria Tan at 8:55 AM