Dr Jani Tanzil alerted us that mass coral bleaching may have started on our shores since the second week of June. So we are on the look out for this at Cyrene. 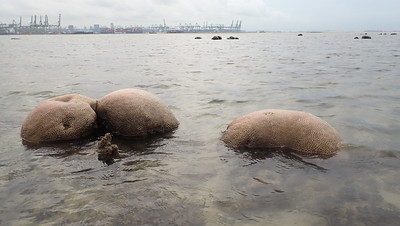 Today, I estimate about 10% of the hard corals that I saw are bleaching, with an additional 20% showing stress (paler than usual or with bleaching portions) or with recently dead patches. Some parts of this shore has large patches of leathery soft corals, very few of those I saw were bleaching. The situation wasn't as bad as what I saw during mass coral bleaching in 2016. Despite the drastically reduced seagrass cover, it was nice to see many dugong feeding trails. The team also found Giant clams.


I surveyed the western end of Cyrene which is the most reefy part. I could see white patches of bleaching coral and leathery soft corals.

But many hard corals that I saw, both large and small, were doing alright with no pale or bleaching portions. 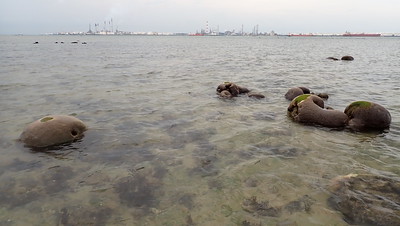 I'm surprised to see many large clusters of leathery soft corals on the western end of Cyrene. 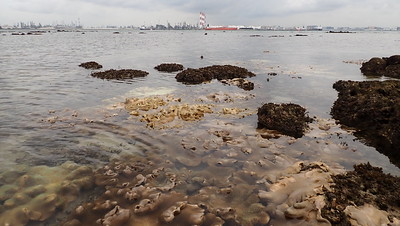 Most of the leathery soft corals I saw were alright. Only very few were outright bleaching, and not many had pale patches or dying patches. 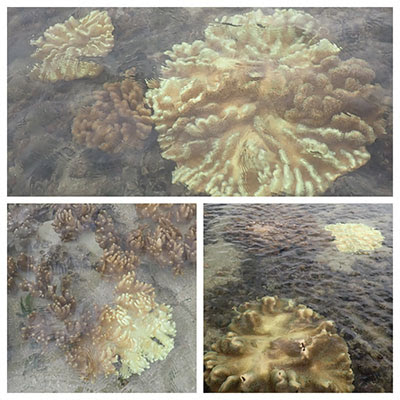 During mass coral bleaching on Cyrene in Jun 2016, about 80-90% of the hard corals and soft corals that I saw were bleaching. I last surveyed this reef in Jun 2019, when I did see some bleaching as well.
Here's a compilation of some of the hard corals I saw, with a ruler for further study by others.
I only saw one bleaching Frilly anemone. I saw many Asparagus flowery soft corals, most were orangey (rather their usual healthy purplish shades), but none were bleaching. Other cnidarians I saw were alright: other Frilly anemones, zoanthids, corallimorphs, Haddon's carpet anemone. 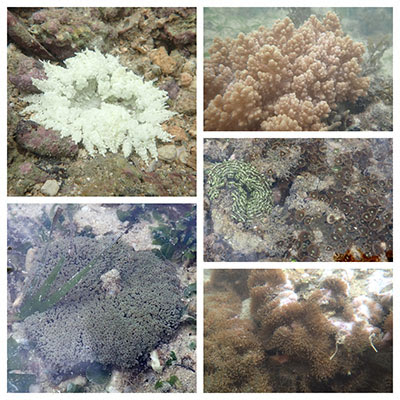 I also noticed some sponges with greyish melted portions. But most of the sponges I saw were alright. 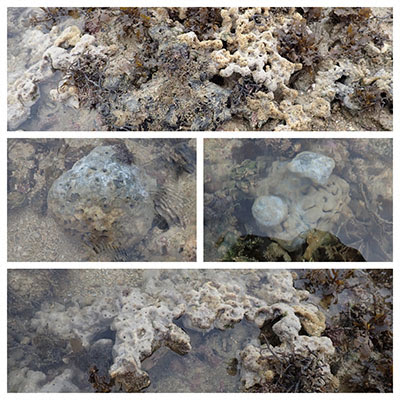 I came across a few clusters of small Horse mussels embedded in the sand. The shells were mostly empty and I saw a row of Reef murex snails that appeared to be feeding on them. 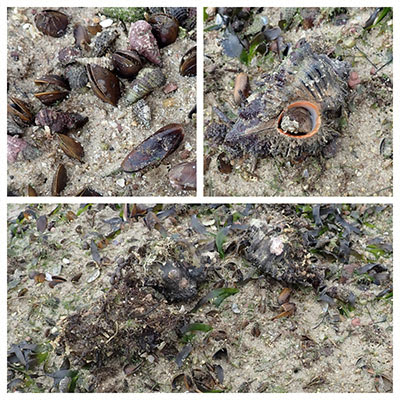 The rest of the team also came across several Fluted giant clams in several spots on the reef.
Although it lies in the middle of an industrial triangle and major shipping lanes, Cyrene has some of Singapore's most amazing shores. The 'star' of Cyrene used to be the many Knobbly sea stars that were commonly seen. Today, I only saw two. But the rest of the team saw more, scattered in other parts of Cyrene. 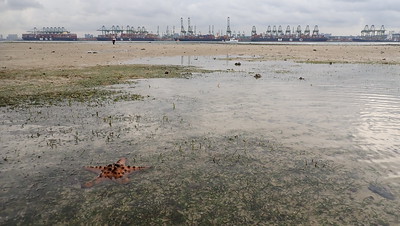 I didn't see a lot of marine life on the sandy shores. Only one Common sea star, sprinkles of sand bubbler crabs, one Soldier crab, trails of moon snails, and some Acorn worms. 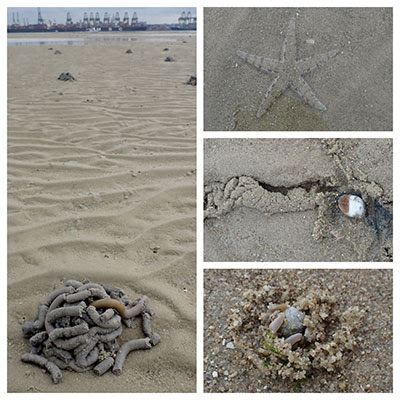 The seagrass cover on the western end of Cyrene has drastically reduced - I estimate about 50% is lost. Where there used to be lush meadows, today there is very little seagrass east of the sand bar. The sand bar itself appears to have moved and has become less tall. 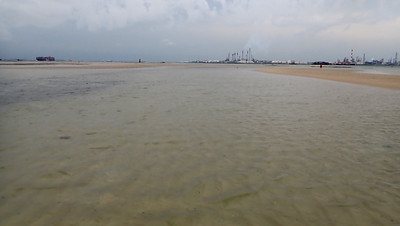 Despite the thin seagrass cover, there were many dugong feeding trails on the northern edge. 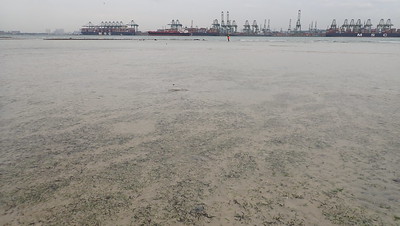 The seagrass cover is denser on the west of the sand bar on western Cyrene. There were many dugong feeding trails here too. 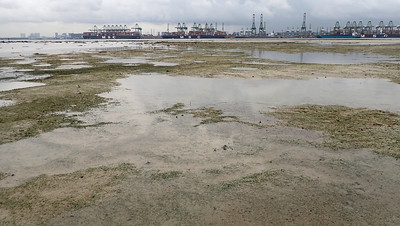 There were dugong feeding trails in the seagrasses in the middle of the reef too. 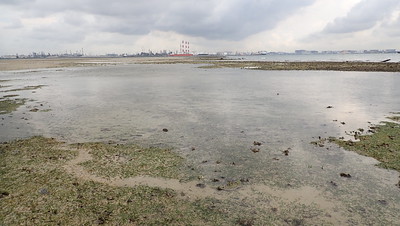 The deep pool in the middle of the reef is still mostly bare of seagrasses. 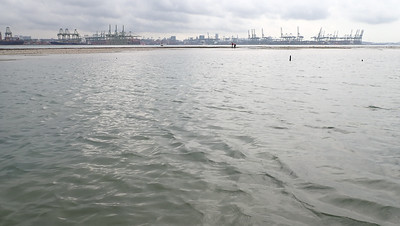 Tape seagrass remain cropped with some so severely cropped that only the stiff leaf edges stick out of the ground. There were also patches of burnt seagrasses. And some patches of fluffy seaweeds among the seagrasses. 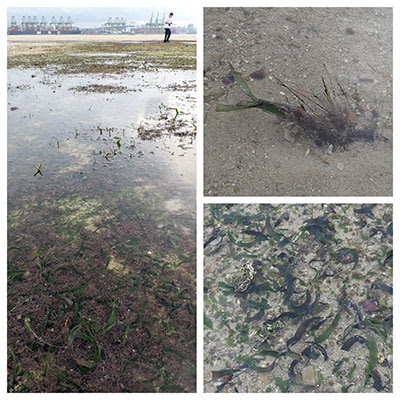 For about half an hour, this sampan was 'parked' off the southern edge of Cyrene with two large fish traps. One person was getting on and off the boat, apparently working on something in the water. 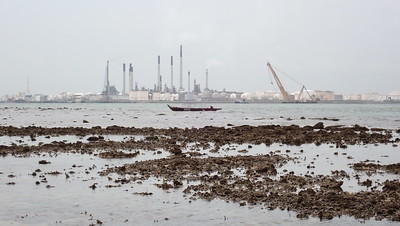 I saw a series of low pegs laid out in rows in the middle of the reef. I couldn't find any research notice. I'm not sure what is going on. 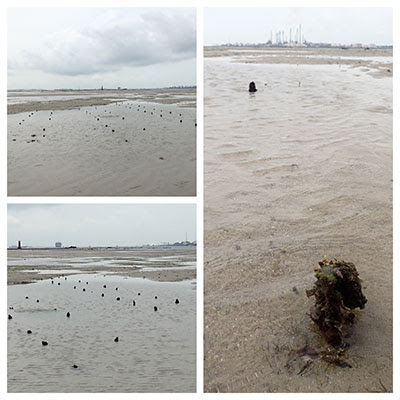 There were still huge piles of sand on Jurong Island nearest the western tip of Cyrene. In Jan 2019, I had already had suspicions that the ongoing reclamation at Jurong Island might be affecting Cyrene. 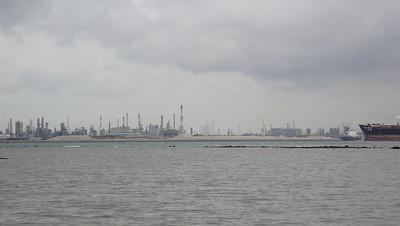 A large area on Jurong Island (Ayer Merbau Basin) near Cyrene is being reclaimed - area outlined in red in this map on the MPA website.
From Port Marine Notice 109 of 2018, these reclamation works have been going on since Jan 2018 and expected to be completed in May 2019. I had noticed the reclamation during our Apr 2018 survey.


Other surveys during this low tide