Today, I check up on the last large Bakau mata buaya tree on the mainland, what is now becoming an annual pilgrimage. 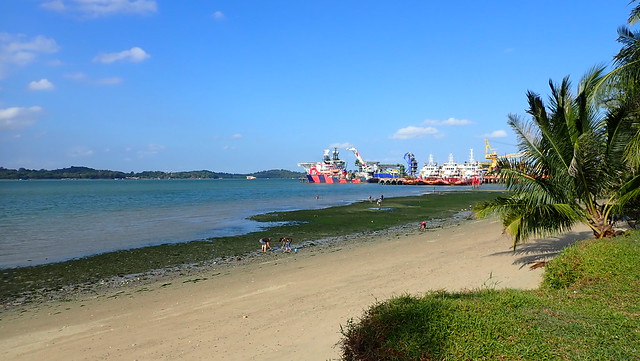 We also check out the intertidal shores and the team made some first time surprise finds! It's amazing what we can see, even on such a highly accessible shore.


Thanks to Zaki and Dzar for joining to check out the small patch mangroves near the mouth of Sungei Loyang. This is home to the beautiful Bakau mata buaya, listed as 'Critically Endangered' not just in Singapore but globally too! We last visited the tree in Jan 2018. It is now the last large Bakau mata buaya on the mainland (the one at Sungei Buloh is dead). We were relieved to see the tree is still standing, even though another tree has fallen over next to it (a Nyireh bunga). The embankment behind the tree has also eroded away. 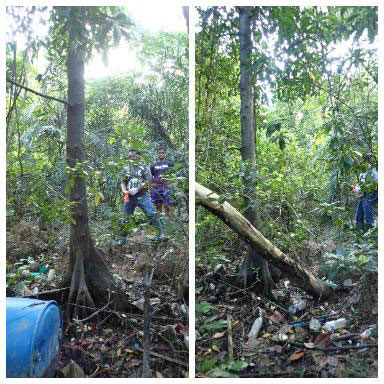 The tree seems very healthy. With a nice neat crown of bright green leaves, lots of calyx strewn beneath it and several propagules too. The base of the tree looks healthy and I didn't notice any peeling bark. 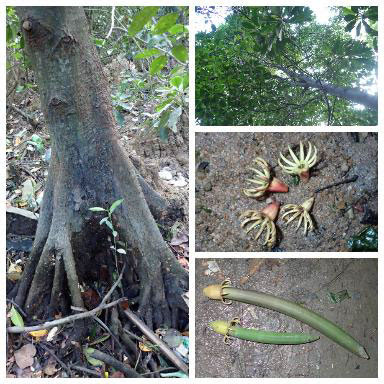 There is still trash accumulated around the tree at the tide line. And two dilapidated kayaks stored above the high water mark a little behind the tree. 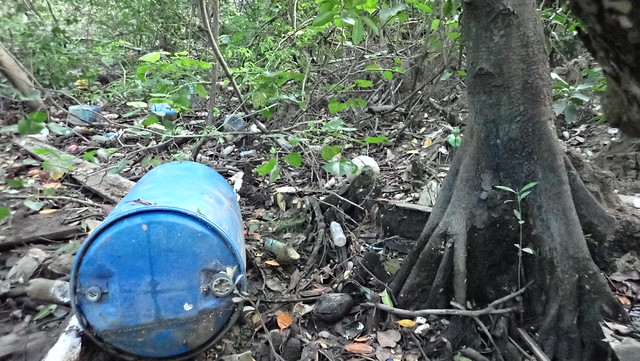 The rest of the mangrove appears to be doing well with nice soft soft smelly mud and meandering streams. Some large trees seem to be thriving. 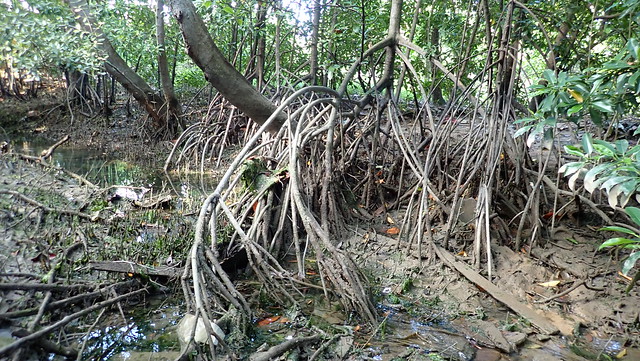 There is a lot less trash at the front of the mangroves, although the sand has really piled up here and plants binding down the sand piles. Not sure if it will affect water flows inside the mangroves. 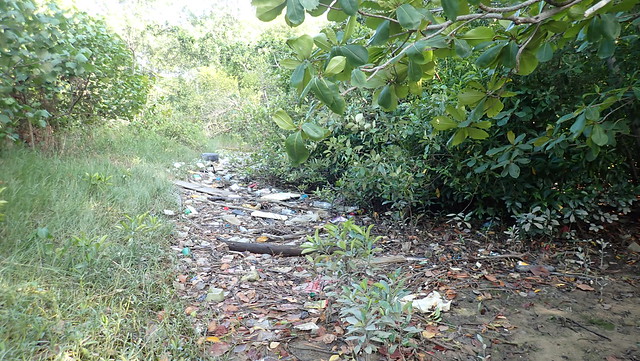 The most amazing find by the team were several Haeckel's anemones aka the 'Darth Vader' anemone. The first time we've seen this on a nothern mainland shore.
Our northern shores are echinoderm heaven, I saw many medium sized Biscuit stars, some medium sized Garlic bread sea cucumbers and tiny Pink warty sea cucumbers. Many small Plain sand stars came out at sunset, some had tiny white Parasitic snails on them. The rest of the team saw several large Eight armed sand sea stars and also an orange Cake sea star. 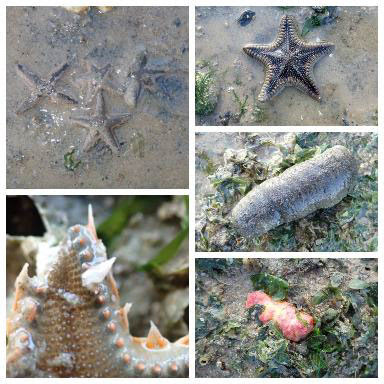 I also saw this animal, which looks like a Synaptid sea cucumber stranded on the shore. 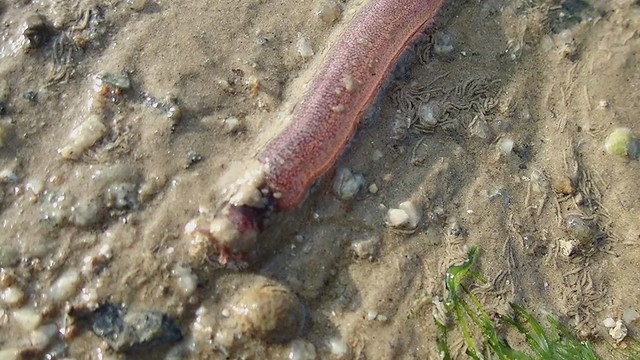 Here's a look at the small patch of mangroves from the intertidal shore. A bloom of fresh green Sea lettuce seaweed covered some parts of the shore. This is normal and happens seasonally, usually towards the end of the year. 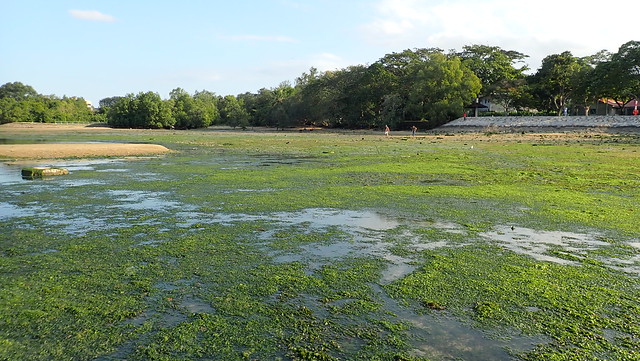 Lush meadows of Spoon seagrass grow all along Pasir Ris shores. Most were alright, although I saw a few patches of bleaching Seagrasses can lose their green colour and turn pale when they are stressed, e.g., due to high temperatures or pollution. 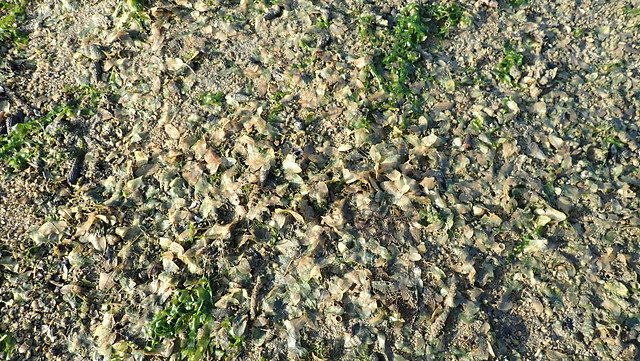 This shore is very well used. There were many people digging large parts of the shore with a cangkul, probably looking for bait worms. Those large vessels that we always see docked in this area, I found out belongs to Oil Spill Response, a global NGO that is activated to clean up oil spills. This is one of their regional bases, where they are on standby with equipment and supplies to deal with oil spills. Here's how they tackle oil spills, from a talk I attended in Mar 2014 ago by Oil Spill Response. 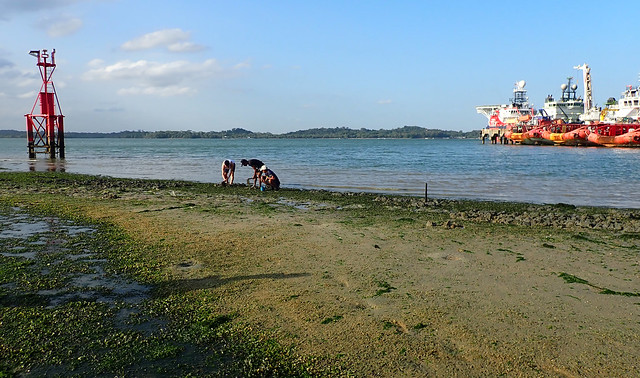 As usual, there is still much litter on the shore especially on the low water mark. Many are clearly from fish farms, e.g., fish feed bags, bags of ice, and small packets of carbo like noodles (expired carbo is used by farms to make into fish food). There are 60 Singapore fish farms located off Pasir Ris Park. They are not provided with daily door-to-door trash collection and are expected to bring their industrial trash back to the mainland. Here's more about trashy Pasir Ris Park and fish farms. 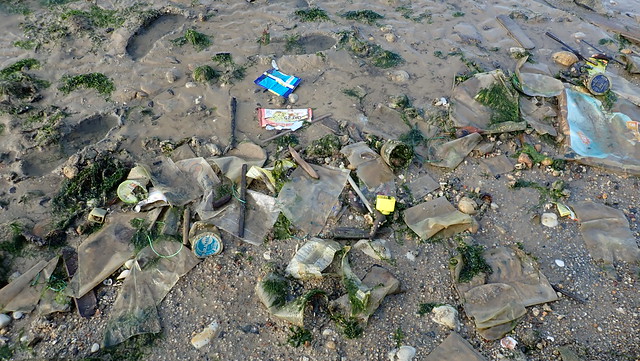 Thankfully, Zaki and friends are now regularly clearing up trash on the low water line, which is often missed by the cleaners who clear the high water line. 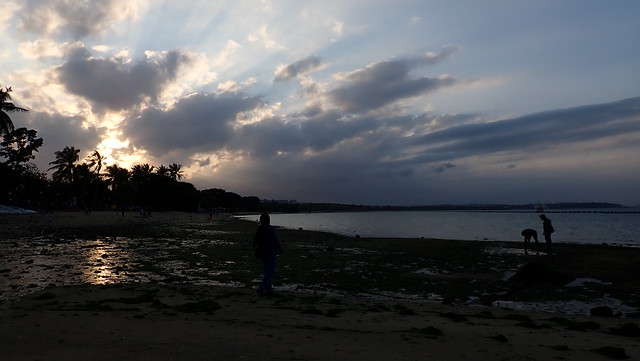 We enjoyed a lovely sunset as the tide turned and we ended the survey. It was great catching up and spending time together on the shore!
Photos by others on this trip