In the news: Invasive mussels in Singapore's northern shores

The mussels we have been seeing at Kranji and the work done on them by Lim Jia Yi were featured in major mainstream media articles recently. 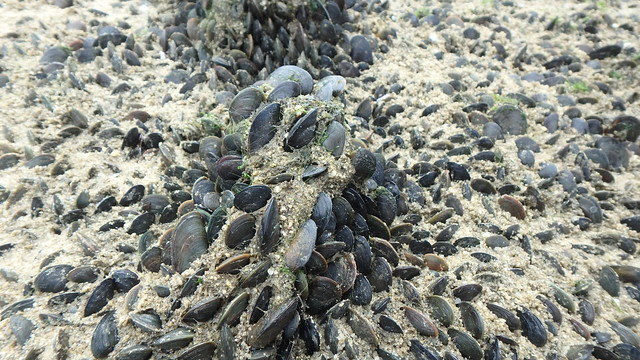 These articles are consolidated on wildsingapore news. Highlights include answers to these questions ...

Where are the mussels from and where can they be found in Singapore?


When did the mussel population first explode in our waters?


The researchers placed nylon sheet netting underwater at a floating fish farm off Changi. The netting was first put out in September 2014 and renewed every month between October 2014 and February last year.

The National Parks Board (NParks), custodian of Singapore's nature areas, told The Straits Times that it was first made aware of the mussels early last year, and that it is currently collaborating with experts from NUS on research to better understand the mollusc.


What will be done about the mussels?


Dr Karenne Tun, director of the marine division at NParks' National Biodiversity Centre, said the board will be working with experts from NUS to assess the presence and potential movement of the mussels within Singapore's waters using eDNA techniques.

"This would enable us to develop a holistic science-based management plan for the species. At the same time, NParks and the Tropical Marine Science Institute will be working with volunteers from the Marine Conservation Group of the Nature Society (Singapore) on a mussel removal programme at areas most impacted by the mussels," said Dr Tun.

“We’ve noted their encroachment since end of 2015 but only received confirmation that it was an invasive species much later,” he told ST.

“For now, the horseshoe crab rescue and research volunteers are willing to clear the mussels even if it’s a short term strategy but we want to focus on ecological studies to understand how the species lives and interacts. This will help us develop interventions that may help to manage the spread and hopefully eradicate the problem.


In the next phase of the study, the researchers will look into the life history of these mussels, such as their reproduction rate and environmental tolerance.

The researchers will also look at the larger impact of their invasive presence on fish farmers and the shipping industry .

Dr Teo urged the public to not collect or consume charru mussels found in the wild.

Mussels are filter feeders that obtain nutrients by processing large amounts of water they live in.

"While they are consumed in some countries, I think it's important in Singapore that people are a bit more cautious about what they want to collect. Wild collected food carries risk of environmental contaminants whereas what you buy from the market has gone through Agri-Food & Veterinary Authority (AVA)," said Dr Teo.


What are the possible impacts of the mussels?


At least one fish farmer who also grows shellfish has been affected by the invasive mussels. Ah Hua Kelong co-owner Bryan Ang, 29, first noticed Charru mussels about two years ago at both his farms in Sembawang and Pasir Ris.

“They suddenly just appeared (and) kept growing till the green mussels cannot survive. It’s quite damaging,” he said.

Although not the main source of his business, his farms harvest about five tonnes of Asian green mussels a year. Now, Charru mussels make up about 70 to 80 per cent of his mussel harvest at the Sembawang farm, and about 25 per cent over at Pasir Ris.

“We can’t do anything about it. We can’t sell (the Charru mussels because) nobody is going to buy it, (they’re) so small. They (also) keep growing, like weed. You can clear them but they come back again,” he added.

Mr Stephen Beng, chairman of the Nature Society Singapore’s marine conservation group, has seen a steady growth of the invasive mussels at the Kranji mudflats – home to horseshoe crabs – since late-2015.

The invasive species could out-compete the horseshoe crabs for space or strip the mudflats of life-supporting nutrients and cause a shift in the base of the food web, upsetting the ecosystem.


Liz Lim earlier shared this video of a horseshoe crab struggling because a layer of mussels had settled on it. She saw it during our survey of Kranji in Jan 2018.


Related posts on this blog