I checked up on Lim Chu Kang Jetty again. There are no freshly dead fishes, but the 'old' dead fishes are still there. And once again, I saw a truckload of expired biscuits being delivered, probably to be fed to the farmed fishes. 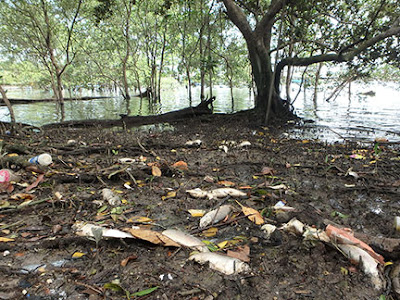 
The Straits Times reported today, on the mass deaths seen yesterday. Highlights of the articles:

"AVA did not respond to queries by press time." [Ria's comment: Yesterday I saw AVA clearly present at the shore among the dead fishes.]

Only farmers spoke to the media. They said "dissolved oxygen levels have been decreasing since July 8. There was a marginal increase on July 12 but after that, it came down again and has remained low since."

This is attributed to poor water circulation: "we are not near an open coast, water is slow moving such that dissolved oxygen levels deplete more quickly." and low dissolve oxygen levels will thus "recur from time to time".

Farmers "ruled out the possibility of a plankton bloom as a reason for the low levels of dissolved oxygen."

"None of the farms contacted by Fish Farmers Association of Singapore president Timothy Ng or The Straits Times suffered serious losses." Nothing beyond "normal losses".

On 18 Jul 2016 evening, I checked Lim Chu Kang Jetty briefly at high tide. There were still a few dead fishes floating near the water, but none piled up on the shoreline. 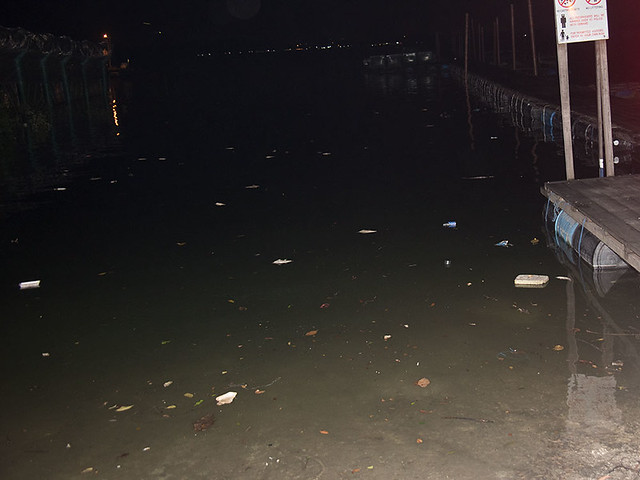 The skip tank was filled to the brim with what smelled like dead fish. There was also a pile of bags filled with what looked like trash removed from the mangroves. The bags did not smell of dead fish. 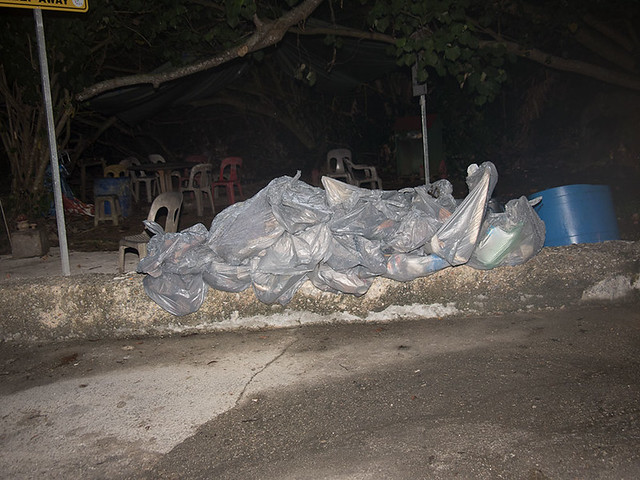 On 19 Jul 2016 morning, I checked again. There were no dead fishes floating in the water, and no dead fishes within sight of the Jetty. But I could still smell dead fish. 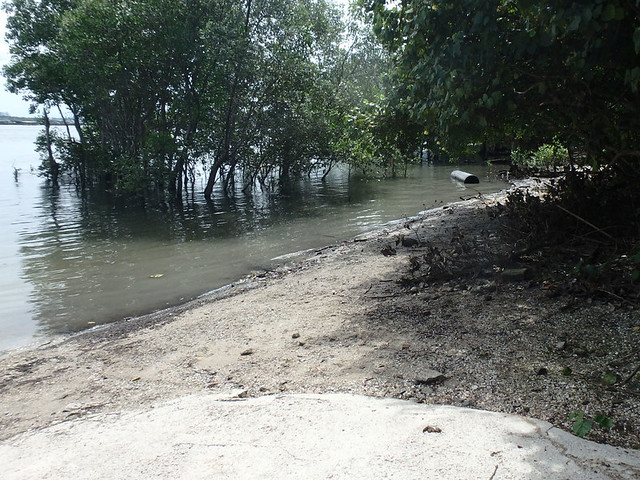 A few metres away from the Jetty, the dead fishes that I saw yesterday are still there. They were now pushed up to the higher tide line and spread out deeper into the mangroves. 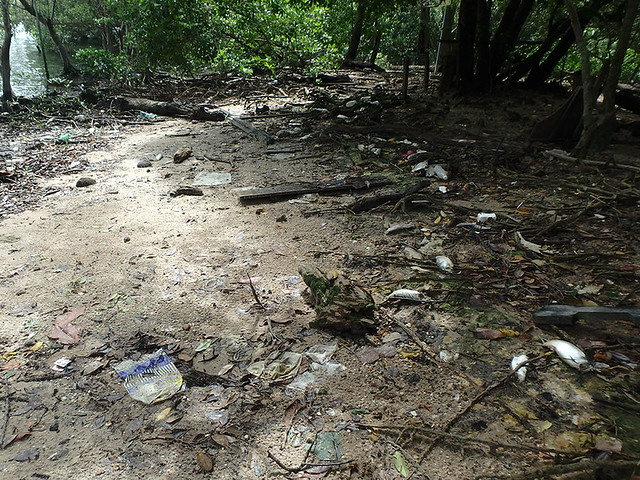 What do farmed fishes eat?

It was busy at the Jetty. With live fish being picked up by refrigerated van. There was one small lorry piled with irregular, lumpy packages which are hauled onto small boats at the Jetty. 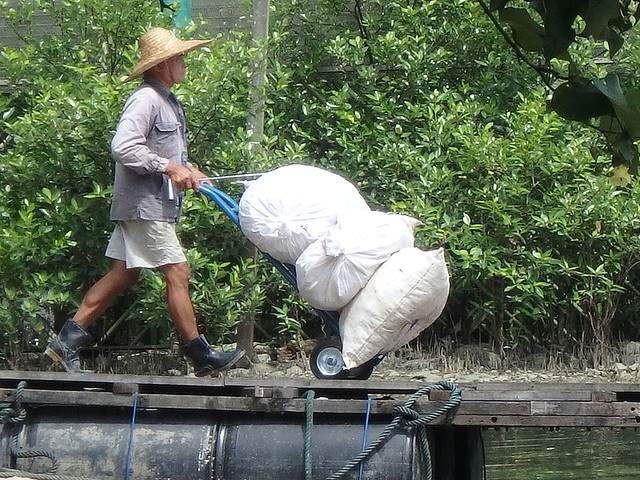 Next to it there was another a small lorry stuffed full of expired biscuits. 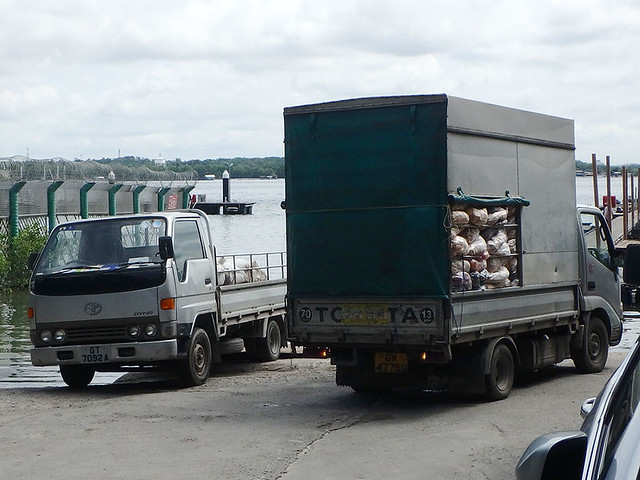 Some of these biscuits are individually wrapped in plastic. 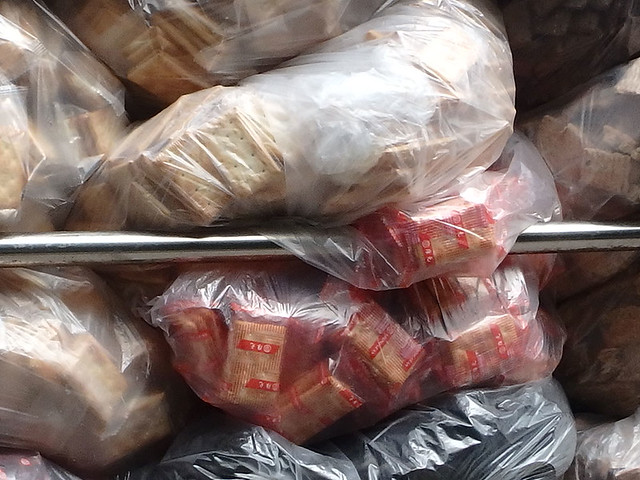 I also hear that some fish farmers use expired packaged carbo from Malaysia and Indonesia. So if we see packages of foreign snacks and instant noodles, these may not necessarily have floated all the way from these countries.

Even though a skip tank is provided for Western fish farmers, and it is well used, it does require farmers to bring their trash all the way back to the mainland. Here's another old post about my efforts to address the trash issue with AVA.

Mass fish deaths occur due to poor water quality. Poor water quality is a reflection of the insults we inflict upon the marine ecosystem. I truly hope there will be a multi-agency holistic effort to understand the underlying causes of repeated and regular mass fish deaths, and to work with all stakeholders to resolve the issues.

I did not survey Sungei Buloh or Kranji today.

There are too many shores for me to personally check, so I really appreciate any info or photos that you can share. Thank you!