Reefy animals have settled on rocky parts of Changi. Early this morning, I made a solo visit to check them out. 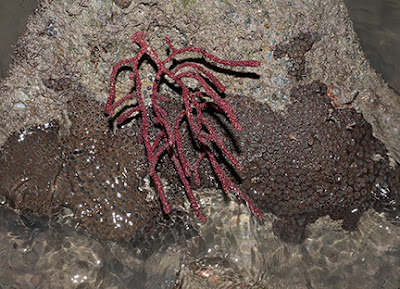 There were many sea fans, but not much sponges.


The water is quite clear this morning! Tthere were many half beaks and I saw one Babylonia snail. 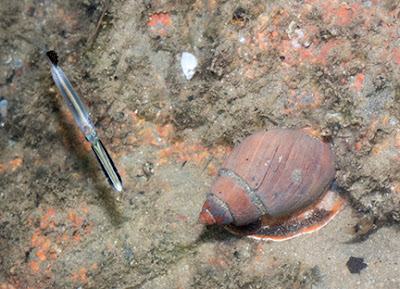 In some areas, I could see the small sea fans, sea pens and ceriathids that dotted the shore! 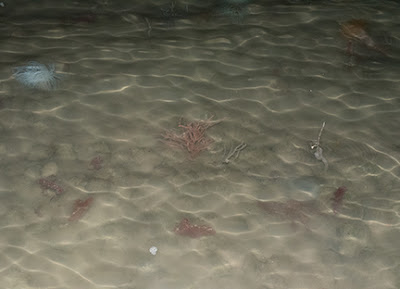 The sea fans were mostly small to medium-sized. And while there were many individuals, there were not many different kinds of sea fans on the shore today. 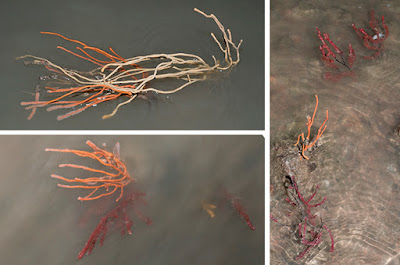 The most abundant sea fan were Gnarled sea fans.

Some of the Gnarled sea fans have orange polyps.

There were also many Candelabra sea fans. In one, I saw a Winged oyster, the kind that only grows on sea fans. But didn't see any Ovulid snails in any of the sea fans. Which is just as well for the sea fans as the snails eat them! 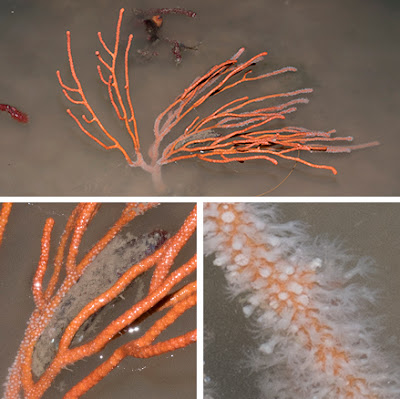 There were a few yellow sea fans. I'm not really sure what kind they are. 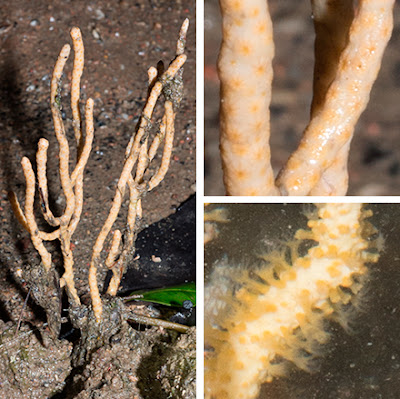 In some parts, there are lots of patches of Zebra coral. Among them, some Neat hexa corals. None of them were bleaching. 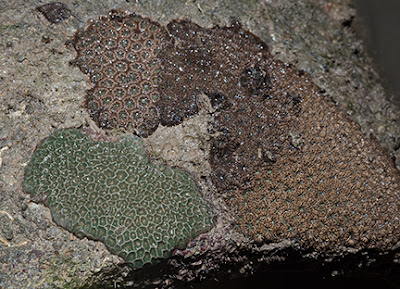 In dark places, there are also tiny Cave corals. 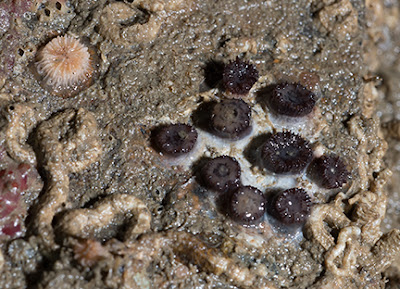 In the soft silty ground, there were some Flowery sea pens. 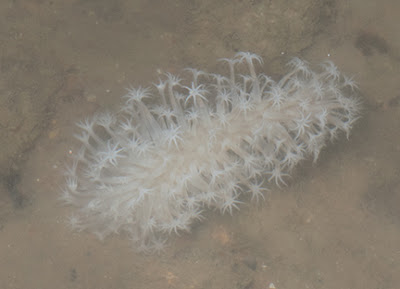 I also saw one Sea pencil, and one Slender sea pen.

There were several Common cerianthids out of the water on the soft silty parts of the shore. They all had tiny black Phoronid worms. 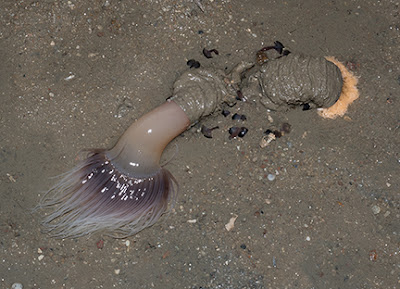 There were many crabs on the shore. But some like this Sea toad crab is very well camouflaged. There were many large Stone crabs. I saw several different kinds of Swimming crabs too. 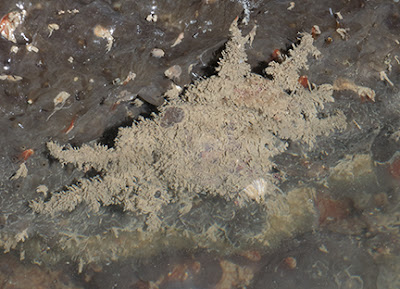 This is NOT our favourite animal. It is the Stinging hydroid whose sting feels like a jolt of electricity. I saw a few small clumps today. 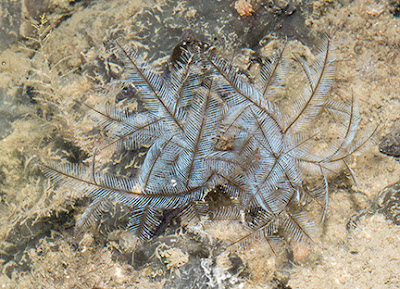 This Candy hydroid doesn't sting and comes in bright pink or orange.

There were still some small patches of Button zoanthids. 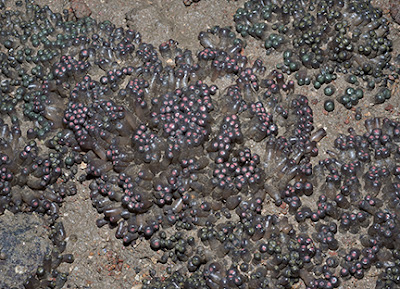 In some parts, there were many Lined bead anemones among the barnacles. 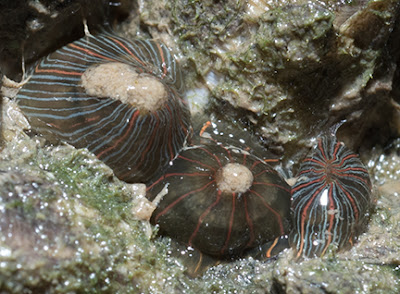 I saw a few Banded fanworms. I usually only see these in reefy areas. 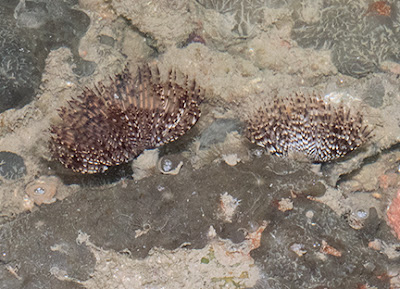 As usual, there were many Crown sea stars. 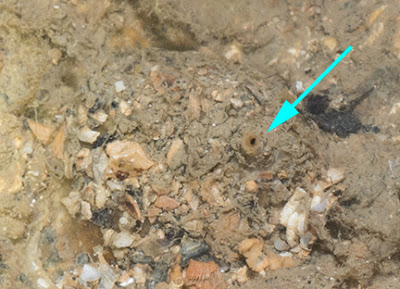 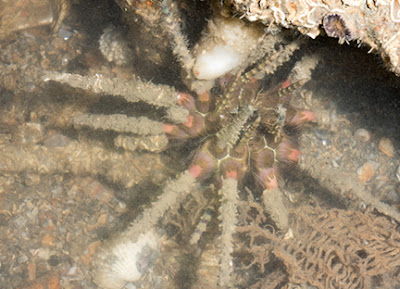 There were even fewer kinds of sponges than on my last trip in Jun 2014. The most abundant sponge on the shore was Melted chocolate sponge which still coated many rocks. Those in the water had many little Sponge synaptid sea cucumbers on them. 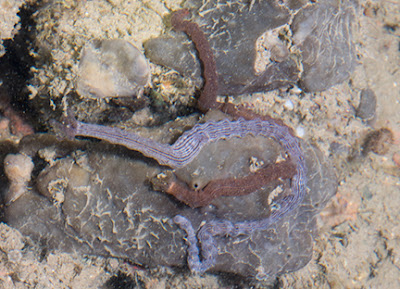 The next most abundant sponge were Golf ball sponges, most in deeper water.

There were some Spiky ball sponges. But I didn't see any Purple branching sponges and Elegant branching sponge that are usually common here. Although there were many ascidians, I didn't come across any flatworms. 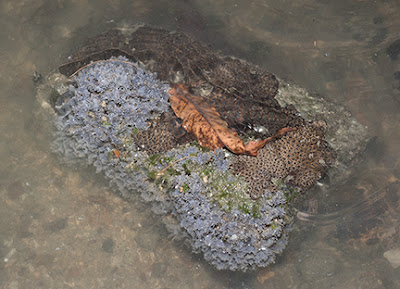 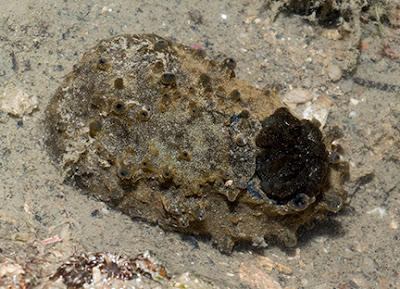 There were a few small patches of Spoon seagrass on the patch of dead cockle shells. It was dark and the ground was soft so I couldn't check much further for seagrass. The Perepat mangrove tree I saw in Jun 2014 has grown tall! There were also several other young mangrove saplings on the high shore including one Api-api putih. 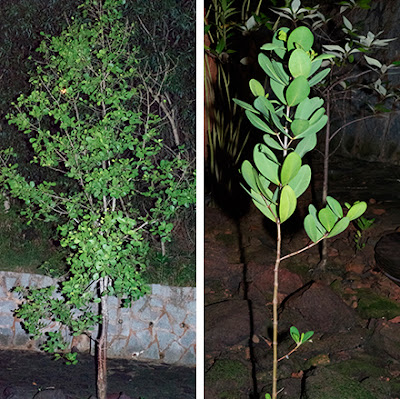 The shore seems well, although rather sparse of encrusting organisms. Let's hope it stays well until we visit again in a year's time.

More predawn trips ahead in the next few days!