Changi was full of Babylonia snails this morning! I also came across ferocious marine life. 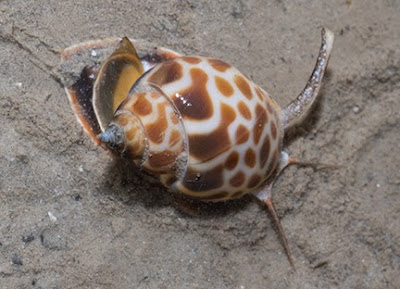 But sadly, we did not see any seahorses.


This beautiful snail was identified as a new record for Singapore in 2013. Before then, we have not seen them. Now, we often see them on Changi, as well as East Coast and signs of them at Pasir Ris. Where did the snails come from? Does this suggest a change in our shores? These snails come in various shell patterns, and are burrowers, with a long siphon, handy for snorkelling while burrowing under the sand. 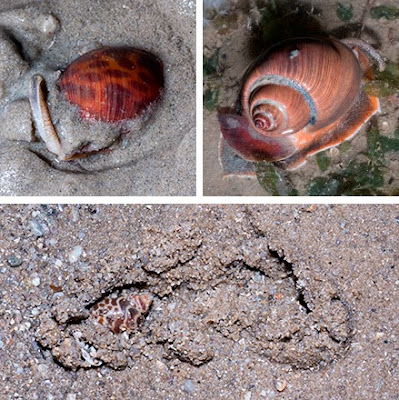 And here's another snail with a snorkel. I was wondering what was buried in the suspicious mound and then spotted the typical snozzle of a Noble volute. This snail burrows in the sand to eat other burrowing snails or clams.

At first, it thought it was a small crab. But a closer look suggests it might a large predatory worm! 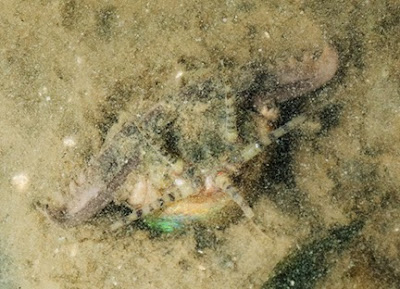 Because it does look like this better photo in clearer water of a fierce looking bristleworm! This one was also taken at Changi, some years ago. 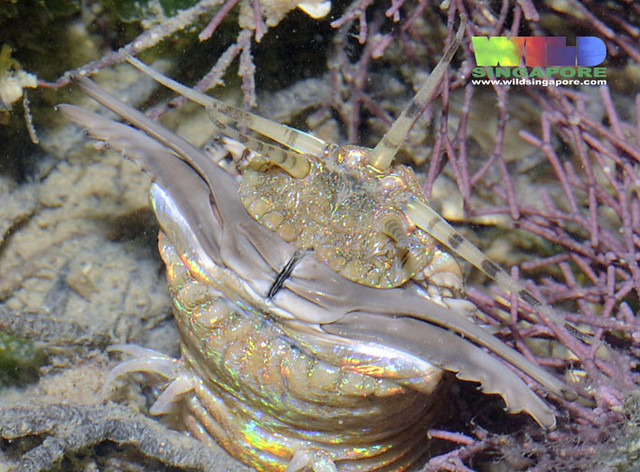 I saw a living hermit crab in the middle of a Tiger anemone. It will probably be eventually eaten by the anemone. I don't interfere with such situations because the anemone needs to eat too. 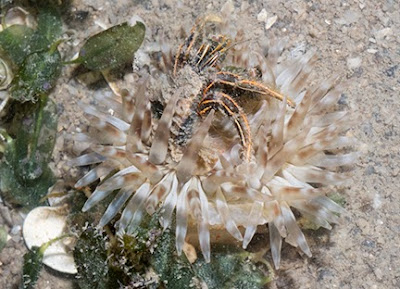 The tiger anemone is yet to be identified and may be new to science. It has red spots on its body and if often seen with its insides bulging out of its mouth.

This is a Miliaris cowrie. This snail with a pretty glossy shell is often mistaken for a slug when its 'hairy' mantle covers the shell. I saw a few small Fan clams. 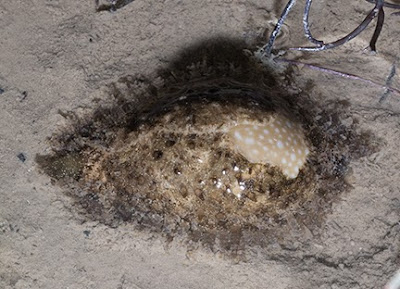 This is a 'naked' hermit crab! It was out of its shell, with its soft backside exposed. A closer look and I realise I'm looking at a queue of hermit crabs about to do the Great Shell Exchange. 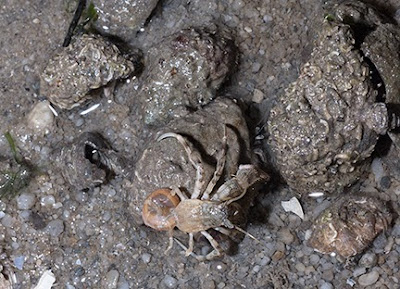 Here's a closer look at the soft butt of a hermit crab. It is twisted to one side to better fit into the spiral shape of the shell. There were little appendages on its butt which it uses to cling onto the shell.

I was glad to see several Big headed seagrass octopuses on this shore. Here's a series of photos of the same octopus showing its wide repertoire of texture and colour changes! 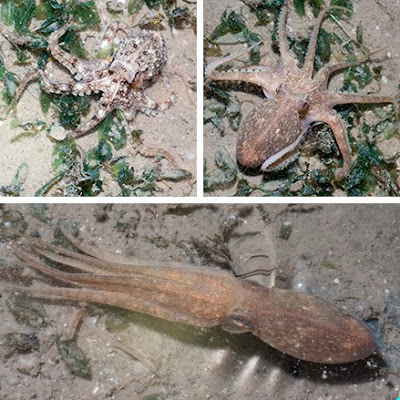 This sea anemone is often found hitching on shells occupied by hermit crabs. But I didn't see any hermit crab in this shell. Oh dear. 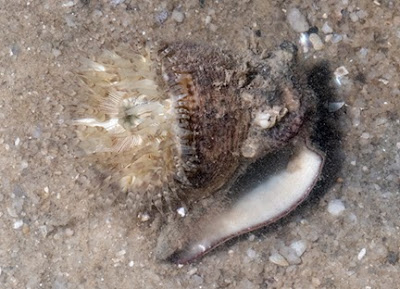 Other small anemones include the Striped sand anemone and some Peachia anemones. I also saw two small Haddon's carpet anemones with tiny anemone shrimps in them.

There were many Biscuit sea stars of all sizes from tiny to medium. I saw one small Plain sand star that appears badly infested with parasitic snails. The rest of the team spotted an Eight-armed sand star which I missed. We did not see any sea urchins, except for one White sea urchin spotted by Jianlin. 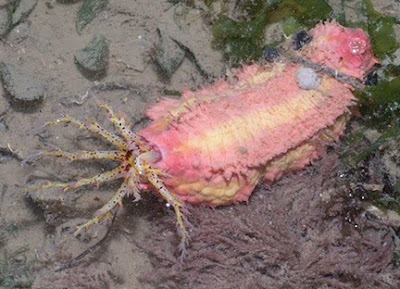 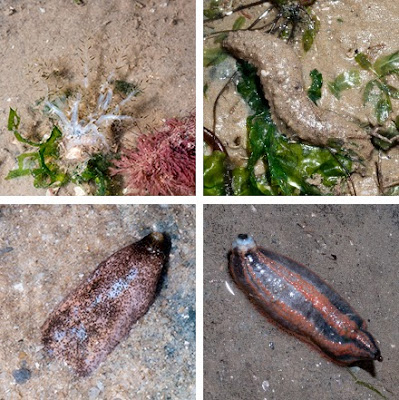 I saw a few Flowery sea pens, one Sea pencil and one very tall Slender sea pen which had encrusting animals growing at its tip! There are a lot more Cerianthids aka Peacock anemones on this shore than other parts of Changi. We didn't see any large sea fans today. 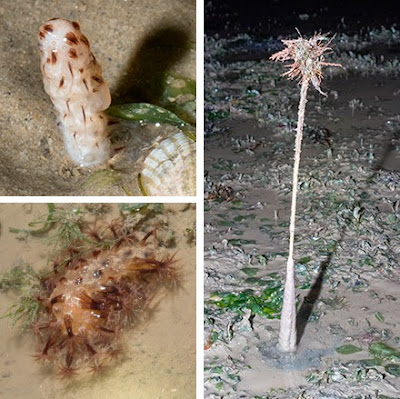 The Spoon seagrasses seem to be doing well, with fresh green large- and small-leaved patches. But I only saw a small patch of Fern seagrasses. 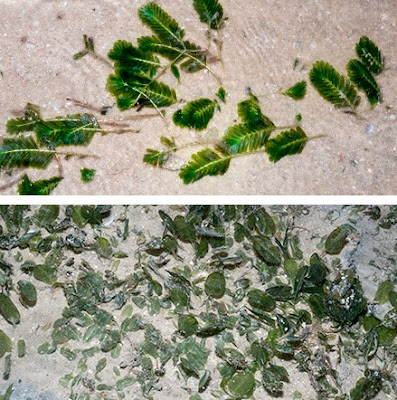 There were intriguing furrows in the small patches of seagrasses. Are they dugong feeding trails? I saw something similar on my last trip here in Jun 2013. 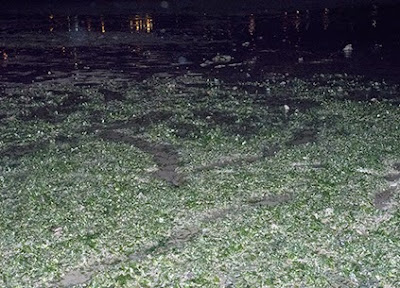 Some patches of seagrasses were bleaching and losing their green chlorophyll parts. Nearby, there is dredging going on at Changi Creek in Jan-Jun 2015. Perhaps this is stressing the seagrasses? 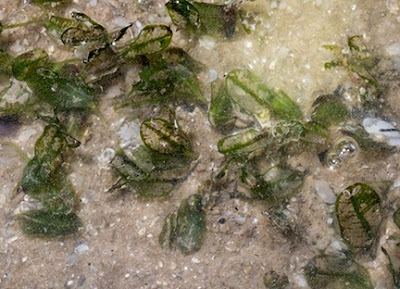 There is a patch of rocks near the dredging area. The large dredgers and barges are parked nearby. 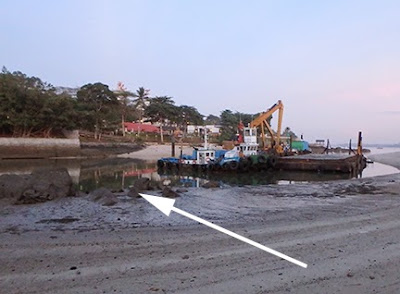 I was surprised to see most of the rocks were thickly covered with Zebra coral. The other most abundant animal were tiny Banded bead anemones. 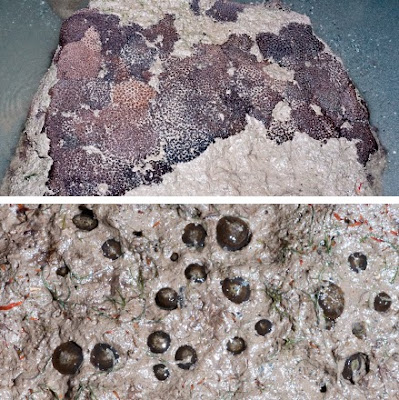 I saw two Wandering cowries and one Rock star, but no sponges except for a few small patches of black encrusting sponges.

I came across a short length of netting abandoned on the shore. It took me just a few minutes to drag it up to the high shore. Why couldn't the person who laid it do the same? Sigh. 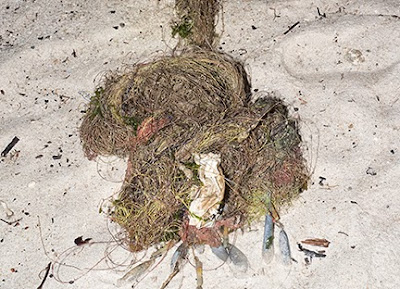 At dawn the tide turns and it's time to go home. Today, I saw less variety of marine life compared to our last visit here in May 2014 and Jun 2013. We are sad that we didn't see a seahorse here today. The last time we saw one here was in Sep 2012. 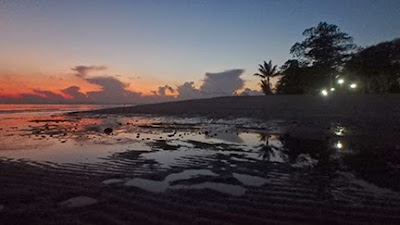 There are not enough low spring tides this year to do all our favourite shores more than once. I hope this Changi shore stays well until we return next year.