How are seagrasses at Pasir Ris after the mass fish deaths? 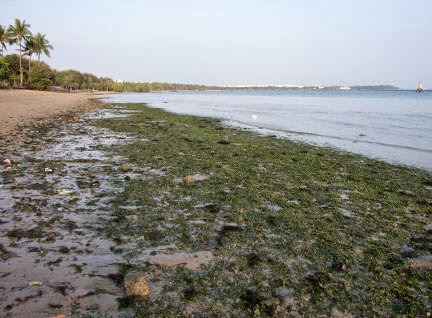 While it was good to see that the seagrasses are doing well today, I also came across 17 dead fishes, lots of palm oil waste, rubbish and other activities that impact the shore.

It was lovely to see nice lush green Spoon seagrasses! Dotted here and there with Gracilaria red seaweed, and animals like the Glassy branching bryozoan. 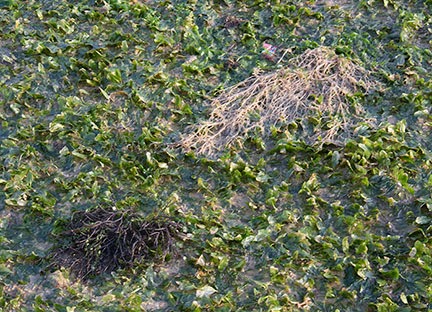 I would say 99% the seagrass was alright. 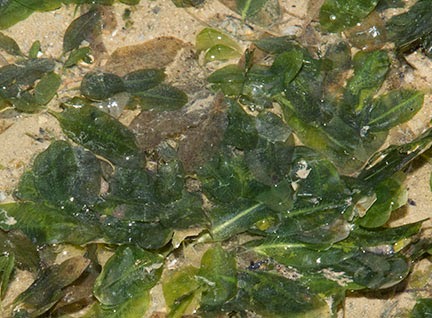 In some areas, there were sprinkles of burnt or transparent blades. 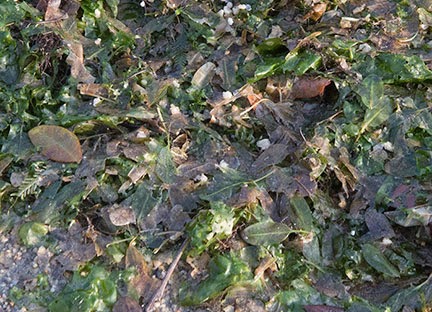 Here's a closer look at some of the leaf blades that were transparent or crisping.

There were a lot of broken off green seagrass blades as well as brown blades washed up in lines on the shore. 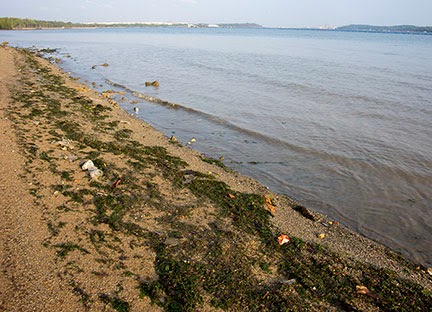 The seagrass meadows and flats are well used by birds. 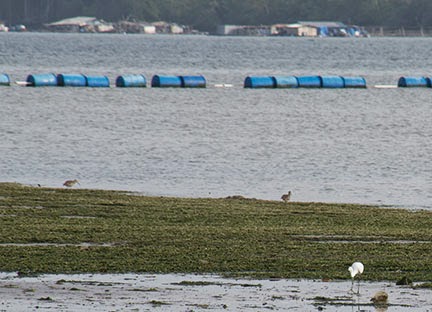 In the distance some kind of shorebird, perhaps a Whimbrel? There were also egrets and green herons as well as grey herons. 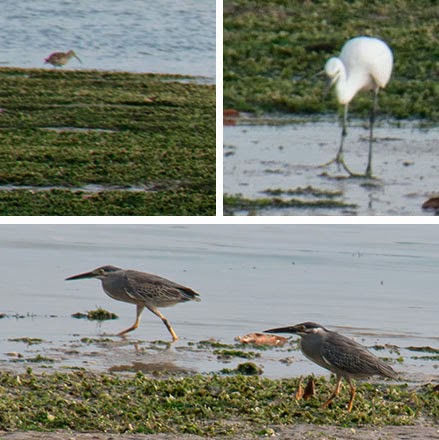 I saw two people digging up large areas in the seagrass meadows, probably looking for worms? 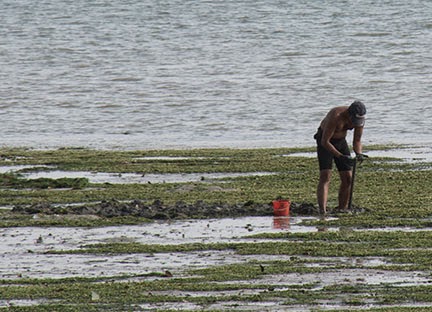 Animals usually hide in daylight so I am not surprised that I didn't come across too many of them during this low spring tide after sunrise. But I did come across this tiny adorable horseshoe crab that is so young it's tail is still just a little stub. 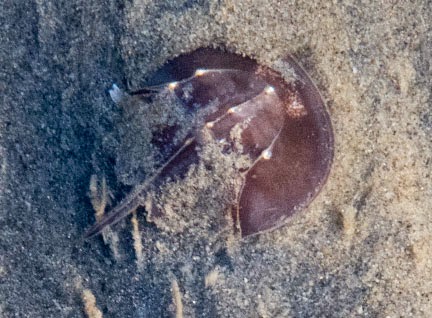 Other animals I spotted included: Leaf porter crab, moults of many small Flower crabs, a Ball sea cucumber, Rainbow sponge, a small Striped bead anemone, and one dead Fire worm. On the high shore under the mangrove trees, there were many tiny Sand bubbler crabs. 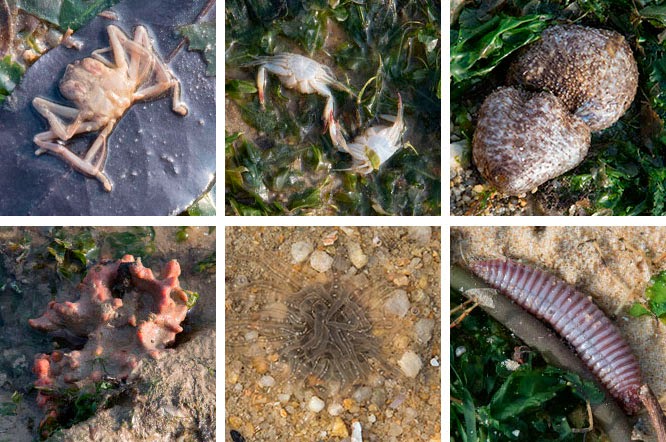 On the high shore, there were many Ghost crab burrows. Alas, there was also a great deal of palm oil waste as well as general marine litter. 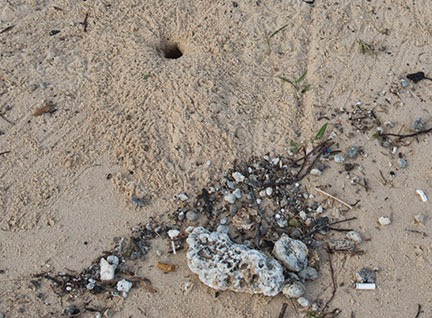 At Sungei Tampines. there are some special mangrove trees. It is Lenggadai , an endangered tree that is rarely seen in our mangroves. It does not appear to grow well in Singapore with only few individuals and less than the 24m maximum height found elsewhere. The flower has a tapering calyx with super tiny petals with tiny tassels! 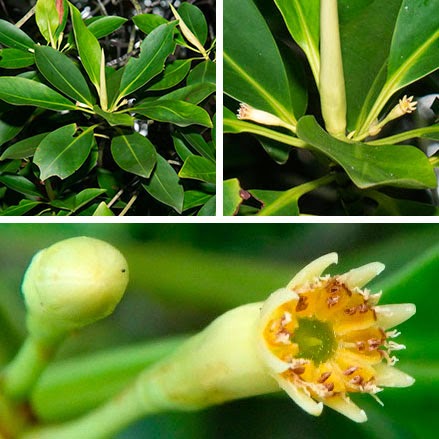 Alas, I came across 17 dead fishes along the stretch from Carpark A to Sungei Tampines. 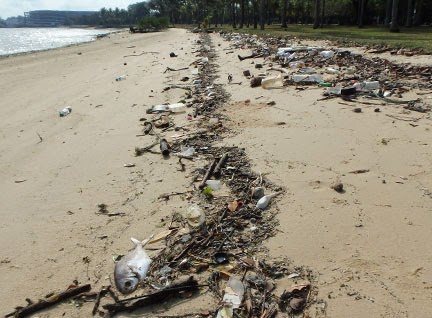 They were all the same kind and of the same size, about 15cm long. They look like farmed fishes. 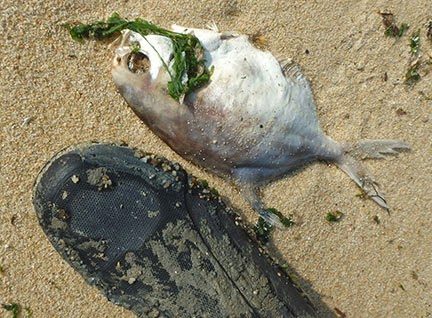 The fishes were in various states of decay. Some looked very freshly dead, others were being well decomposed. Among the debris, I also saw a few large catfish skulls. 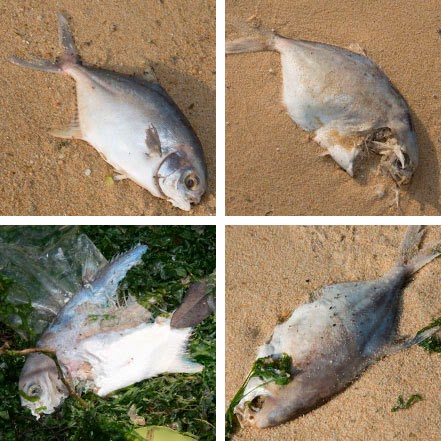 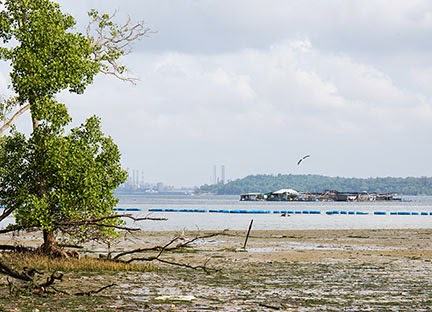 In this photo, behind the blue 'security barrier' is one of the 60 floating fish farms that raise fish here. Behind it, Pulau Ubin and in the hazy distance, Pasir Gudang Port in Johor.

Sadly, today I observed many activities that impact the water quality at Pasir Ris. More about this in a separate blog post.