Another artificial shore teeming with marine life may be impacted by coastal works. The seawalls at Tanah Merah Ferry Terminal is encrusted with living reefs full of corals and reef life. Seagrasses have settled naturally on the artificial sandy shores behind the seawalls.
It appears that works are planned for this area. We no longer regularly survey these sites because the shores near Tanah Merah Ferry Terminal are now off limits and trespassers will be arrested, such as this incident in Nov 2013. We require a permit to do our surveys so these are done only once a year now.

Date: With effect from 19 Mar 2015 to 20 Apr 2015
Location: Off Changi East, within the working area at the following borehole points 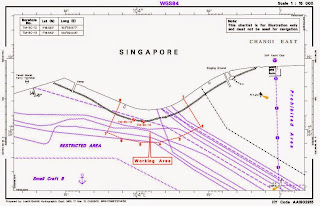 Details : Soil investigation work will be carried out by means of borehole drilling and Cone Penetration Testing using barge. The work barge, with tug boats in attendance, will have a circular safety working zone of 30 meters radius centred at the barge. Tugboats will be used for shifting the barges from one borehole location to another. The shifting of the barges will be carried out strictly during daylight hours only. A safety boat will be deployed in the vicinity of the working area to warn other craft of the project work. Further enquires relating to the project can be directed to Mr Park Eun Seok, Project Director at Tel: 9118-0025 (email: jurongpark@hantmail.net)

What marine life can be found at Tanah Merah Ferry Terminal shores?

Wouldn't it be wonderful if coastal construction can be done so as to allow natural regeneration? Here's more about my wacky ideas for a Singapore Great Barrier Reef. 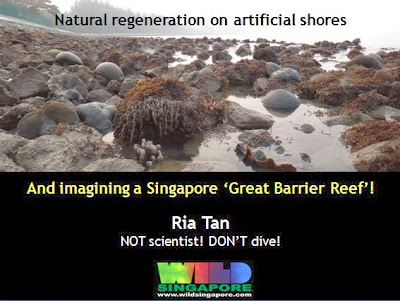