What is killing fishes at Pasir Ris?

I received this photo of more fishes dying at an eastern fish farm today.
So I headed out in the afternoon to see if dead fishes were washing up at Pasir Ris Park beach.
There was a huge dead barracuda, and a few other large dead fishes. I didn't see many dead farm fishes. Dead wild fishes were also reported over the last two days at Sembawang and Changi. The risks of fish deaths are rising in the weeks ahead as there will be no good spring tide to flush the waters around Pasir Ris and Pulau Ubin until April.


I checked out the western side of Pasir Ris today, the same stretch I checked three days ago on 22 Feb (Sat). Alas, today I came too late and the cleaner had already cleaned the high water tide line for the day. So I only checked the low water line of the most recent tide. 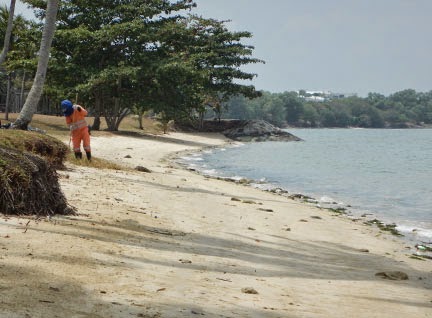 This huge dead barracuda was floating in the water.
I also surveyed a stretch of beach wasn't cleaned yet. So I could check the high water tide line for today. 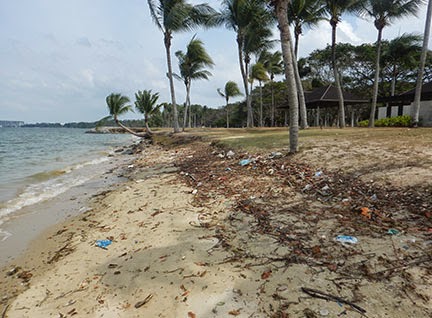 Here, I saw a few very crispy large dead fishes.
I also surveyed the western stretch of shoreline that is outside the Pasir Ris Park proper and thus is not cleaned at all. Here, I saw some really large dead fishes.
I also checked out the eastern side of Pasir Ris Park on Sunday 22 Feb and saw several dead wild fishes.
Thanks also to those who responded to my facebook appeal to report sightings of dead fishes over the last two days. Benjamin Li reported on 25 Feb: "Casualties spotted at sembawang area. Photos not very clear but looks like pampano and tilapias." sharing Jeffery Tsen's photos on Sampan Trips.
While Xu Weiting reported on 24 Feb: "Was near Changi Beach carpark 1 this morning and saw about 5-6 dead fishes on the coast. Most of the casualty fishes were non-farmed ones."

Around the same time last year, there were mass fish deaths at the Eastern fish farms located in the waters between Pasir Ris and Pulau Ubin. Conditions now are rather similar to last year: cloudless dry weather leading to higher water temperatures in the narrow Johor Straits.

Today, in some parts of the shore, there were lots of broken off Spoon seagrass floating in the water. I noticed last week that large stretches of Spoon seagrass were bleaching on the eastern side of Pasir Ris. Is this a sign of elevated water temperatures? 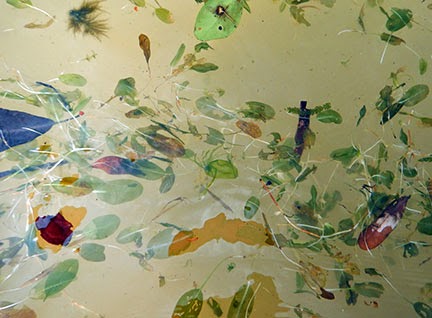 Is it important to find out exactly what are killing the fishes at Pasir Ris?

Although it's heart-breaking to see the fish farmers' months of hard work floating up dead.
It is heartening that I didn't come across large numbers of dead farm fishes washing up on the shore today. Which I did during previous mass fish deaths. Hopefully this means AVA is providing a service to collect the dead fishes from the affected farmers?
Cleanliness surely is a key element of water quality and healthy ecosystems. While there are many variables that we may not be able to control, there are some that we can. If AVA can provide trash collection service during a mass fish death event, why can't they provide a trash collection service regularly? Why can't fish farmers be provided daily door-to-door trash collection like every other household, business and ship parked in Singapore port? More about this issue here. Today, I continue to see trash on the shore that clearly come from the fish farms. 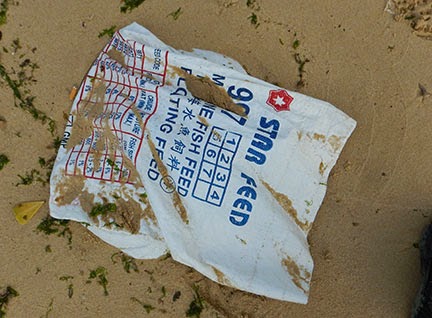