There is a sliver of natural shore that escaped being buried in the Tuas reclamation years ago. Here, there are seagrass meadows, reefs, rocky shores and even mangroves. The team surveys it near sunset yesterday. 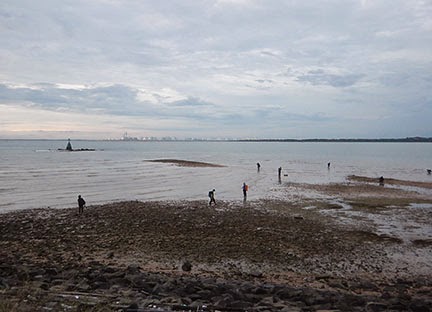 On the horizon is the Tuas Merawang Beacon which gives this shore its name. My last visit to Tuas was in Mar 2012. I'm wondering how it is doing.

The Spoon seagrasses were still lush near the mid-water mark. Jianlin saw this dead fish. It looks like a kind of box fish which usually lives in sheltered seagrass meadows. I seldom see this fish.
Another interesting fish spotted and shared by Chay Hoon is this Slender sea moth.
Marcus got a photo of the Gold spotted mudskippers busy on the shores.
There are rocky shores here too. Among the special finds were the Cryptic sea star (right). There were also many Crown sea stars (left). This great photo by Kok Sheng shows the differences.
I didn't see any sea cucumbers but Jianlin and Marcus spotted these: Thorny sea cucumber, Black long sea cucumber and Beige sea cucumber.
There were some small Haddon's carpet anemones (I didn't see any with anemone shrimps) and some Common cerianthids with Black phoronid worms.

Thanks to Marcus and Kok Sheng for these photos of sea pens on the shore. This is the first time I've seen the Sea pencil outside of the North-eastern shores like Changi. Other sea pens seen included Flowery sea pen, Slender sea pen and Spiky sea pen.
In deeper water, there were Candy hydroids and some colourful sponges like this Purple branching sponge.

There were several Tiger moon snails busy burrowing in the sand. 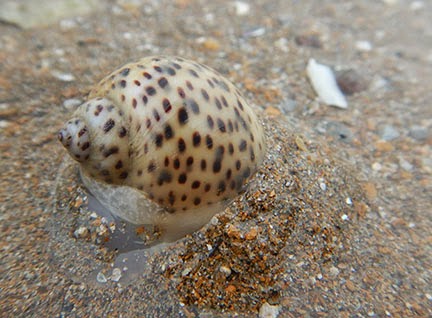 The tiny Strawberry slug is very cute and very difficult to photograph. Thanks to Pei Yan for this awesome shot.
I spotted the empty shell of a Sunburst carrier-shell snail and one skeleton of a dead Cake sand dollar.

There were some Orange striped hermit crabs and lots of porcelain crabs of all kinds.

Marcus saw this Spotted-belly forceps crab. There were also many Stone crabs.
The most abundant creatures on the lower shores were zoanthids: Button zoanthids, Broad zoanthids and Sea mat zoanthids. 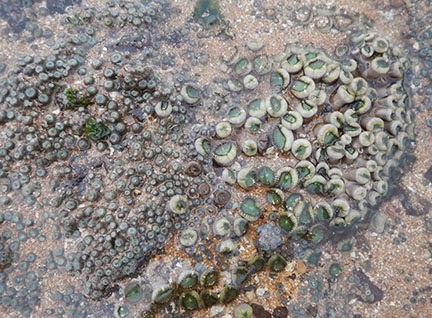 There are some Spoon seagrasses at the mid-tide zone but they seem sparse. On the horizon is Pulau Merambong which is part of Malaysia and has some awesome marine life. 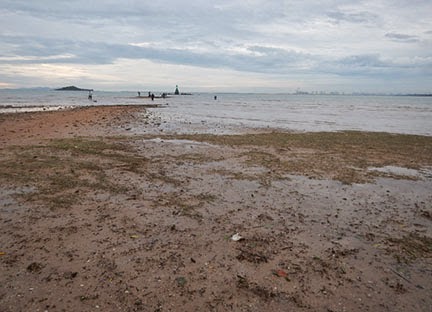 The low-tide zone appears to be bare sand. The seagrasses and shores here are monitored by TeamSeagrass volunteers from Merck, led by Sheryl. Thanks to Sheryl and Anthony for facilitating our access for this trip. 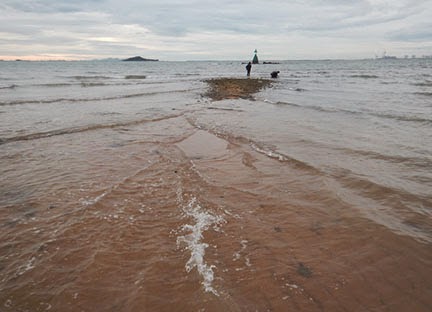 There's even some mangrove trees growing here. I didn't go to this part because it involved walking on a slippery part. 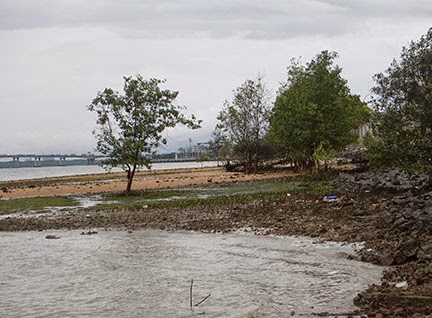 Unfortunately, a large Perepat tree has fallen over. Thanks to Chay Hoon for the photo.
Unfortunately, the tide wasn't as low as we expected! I tried to check out the deeper water, but the waves got too splashy for me. As usual, Kok Sheng is there to take photos of us doing crazy things. 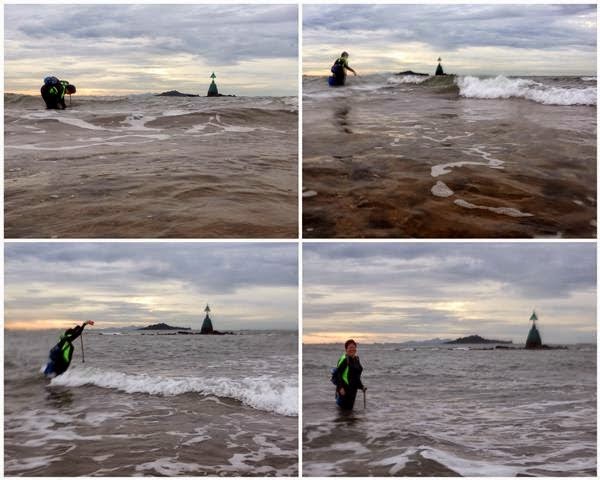 Across the Johor Strait, we could see a reclamation site near Pulau Merambong. Recently, there have been reports of Malaysian plans to conduct massive reclamation opposite the Tuas Merawang shore.
Dubbed "Forest City", the massive reclamation project to build luxury homes (area in red) could entail "a few thousand acres" making it one of Iskandar Malaysia’s single largest projects, The Star reported on 19 Mar.

In June, reports used these diagrams of the reclamation projects.
Last month (Nov 2014), it was reported that "Minister for the Environment and Water Resources Dr Vivian Balakrishnan emphasised Singapore's concerns over Malaysia's land reclamation projects in the Straits of Johor, during the 27th Annual Exchange of Visits between the environment ministries of Malaysia and Singapore. He reiterated Singapore's request for such reclamation works to be suspended until Singapore has received and studied all the relevant information from Malaysia, including the Environmental Impact Assessments, and established that there would be no transboundary impact on Singapore from these projects.

Dr Balakrishnan stressed that both Singapore and Malaysia are obliged under international law, in particular, the United Nations Convention on the Law of the Sea, to undertake and share Environmental Impact Assessments on all works that could have transboundary impact, before starting work."

Following which Malaysia told reporters that "Malaysia has since last month suspended land reclamation projects in the Strait of Johor pending the completion of an Environmental Impact Assessment (EIA). It will take at least three months for the EIA to be completed, said Malaysian Natural Resources and Environment Deputy Minister James Dawos Mamit. He added: “We have given the order to stop work ... We are currently conducting research for an EIA report ... It is not ready yet.”

On 22 Dec, it was reported that the Malaysian Department of Environment is set to pass its verdict on the detailed environmental impact assessment (DEIA) report on the controversial Forest City project by this week.

Media articles about Forest City and other reclamation work in the Johor Strait.