Found at Changi! This new genus and new species of sea anemone is described from Singapore! And thus proudly named Synpeachia temasek. Singapore's wild shores are home to animals that are new to science. So much more to discover and learn! 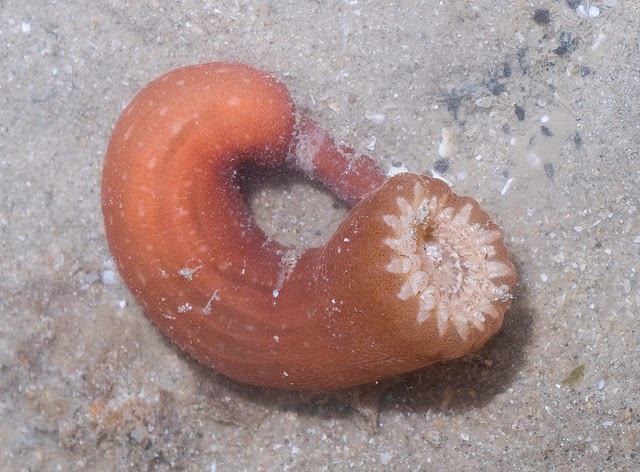 This sea anemone is a burrower, with its long sausage-like body buried deep and only its tentacles sticking out at the surface.

This is the part of the sea anemone that is usually seen above ground. At low tide, its tentacles are often retracted, so the animal resembles a blob.  It is thus often overlooked and hard to spot. The Peachia anemones have an odd finger-like structure sticking out of the mouth, it's called a conchula. 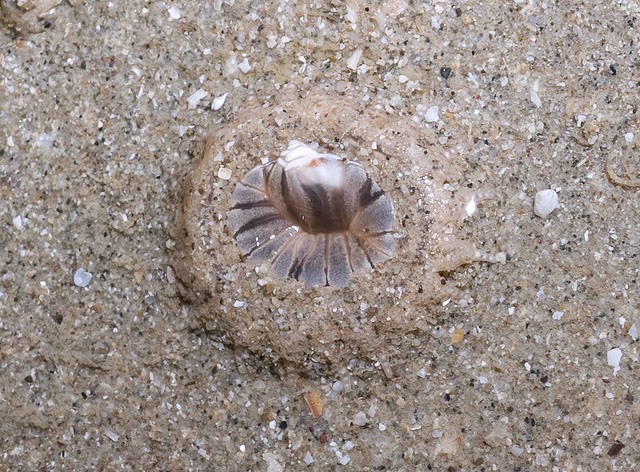 This is what the sea anemone usually looks like with its tentacles expanded. 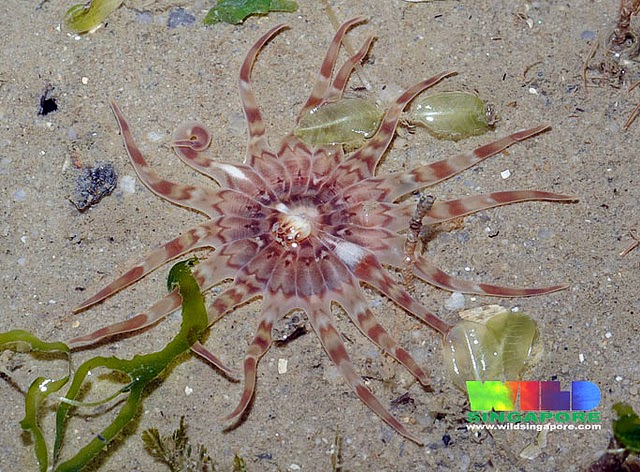 The vast majority of these 'Peachia anemones' that we see on the intertidal have a cream-coloured body column and 16 tentacles. Thanks to the paper, we now know it is called Metapeachia tropica. 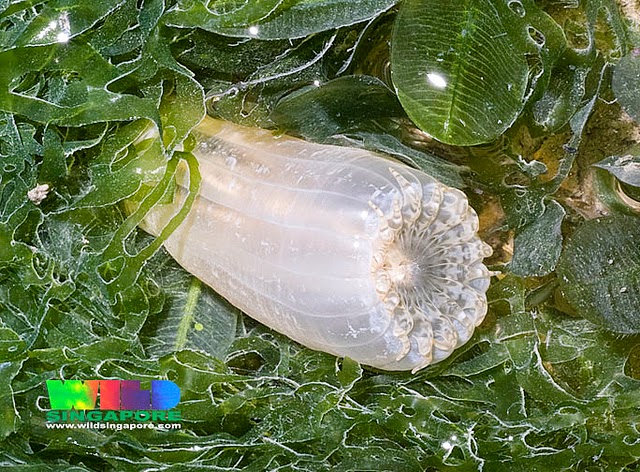 When we were collecting these anemones for Prof Daphne's sea anemone workshop in 2011, James Koh was the first to collect one with a brown body column. Later during the workshop, another was found with a brown body column. Nicholas and Dino who studied them, thought the 'Brown peachia' might be something special. But they needed more specimens to be sure. It took some time before we could find enough specimens for Nicholas to work on. Thanks to Chay Hoon and the rest of the intertidal team for helping to get them.

And which part of Singapore did we find this special anemone? Changi! Singapore's wild shores are home to animals that are new to science. So much more to discover and learn!

The 'Brown peachia' is Synpeachia temasek, which has a reddish-brown column and 20 tentacles. The 'White peachia' Metapeachia tropica, which is more commonly seen on the intertidal, has a white body column and 16 tentacles. Without looking closely at the tentacles and at the body column, both species look rather similar at first glance. 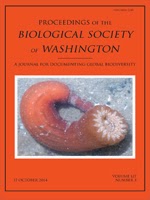 Here's the abstract of the article:


The sea anemone Metapeachia tropica (Panikkar, 1938), which was described from Madras, India, and belongs in family Haloclavidae, has previously been recorded in the Republic of Singapore but without details of appearance and occurrence. We rediagnose Metapeachia and redescribe M. tropica to accommodate the specimens we studied from Singapore (35 individuals were collected and others were only observed in situ); we designate a neotype for the species. A specimen has a cream-colored column, a patterned oral disc, 16 tentacles, and a conchula. Specimens of another species of Haloclavidae occur rarely in some of the same places as M. tropica in Singapore; we describe it as Synpeachia temasek new genus, new species, based on 8 individuals we collected and others that were only observed in situ. An individual has a reddish-brown column, an oral disc that can be patterned like that of M. tropica, 20 tentacles, and a conchula. We infer S. temasek may range west at least as far as Pakistan. Specimens of both differ from the type specimens of the species described from Annam, Vietnam as Peachia mira Carlgren, 1943, which we have not found in Singapore. We provide a key to some members of the Haloclavidae that differentiates the new genus.


Thank you to Prof Daphne Fautin, Nicholas Yap and Dino Ramos for studying this animal, and the intertidal team for diligently finding this special sea anemone!
Posted by Ria Tan at 11:21 AM