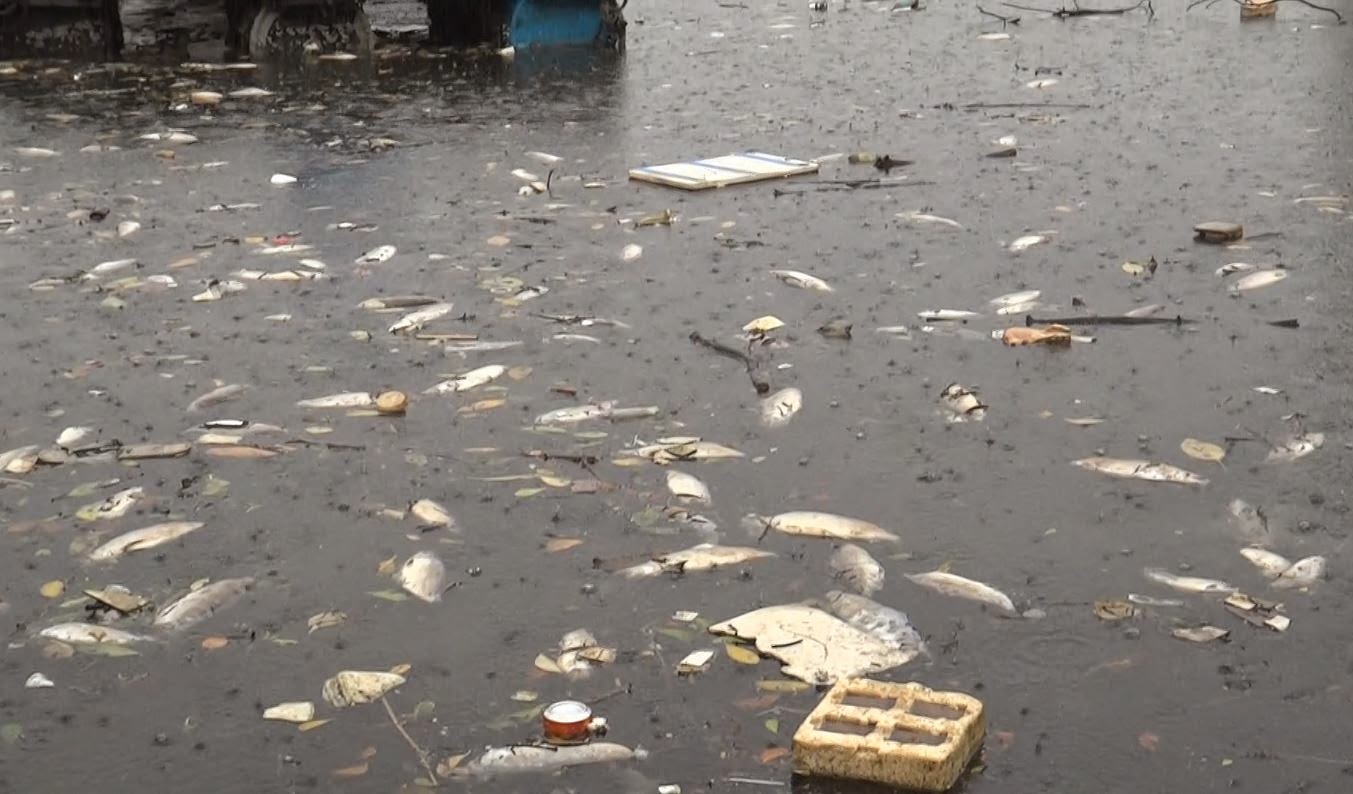 Here's a video clip of the dead fishes next to Lim Chu Kang Jetty. I noticed a small boat next to the jetty with four people wearing bright orange lifevests. They were busy removing floating dead fishes with a small net and bagging them.
There were many dead fishes floating near the mangroves too. 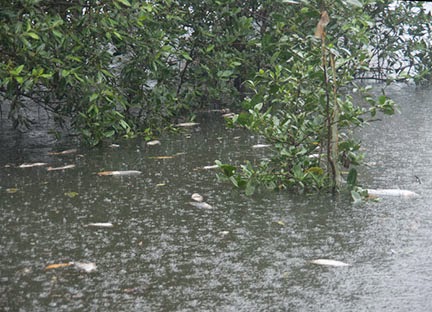 Many fishes had already 'landed' on the mangroves. 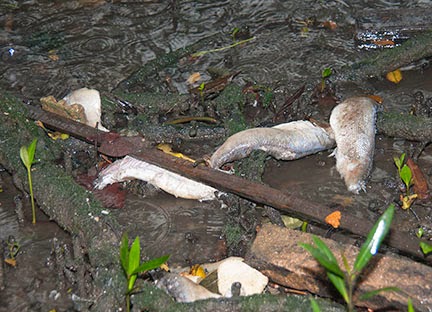 Most of the fishes were rotting, so it is likely to be the same 'batch' that washed up yesterday. This round of dead fish seems similar to the one that I saw on Friday. 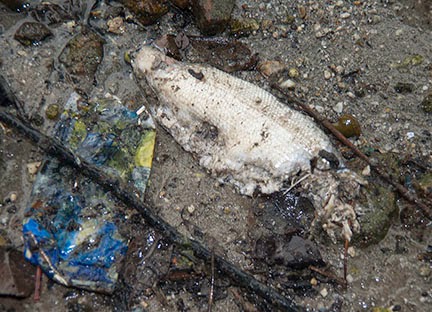 Today, I noticed for the first time, a refrigerator dumped on the shore. The closest households or businesses to the shore which would use a refrigerator are the coastal fish farms. As usual, there are lots of large bags previously containing rice, sugar, ice. Not items that are commonly used by beachgoers, but are probably very commonly used in coastal fish farms. 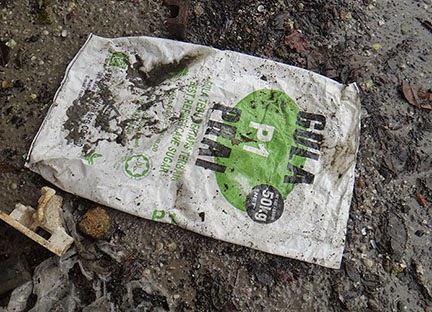 This is the same tank that was here yesterday afternoon. It is now full of bags of trash. 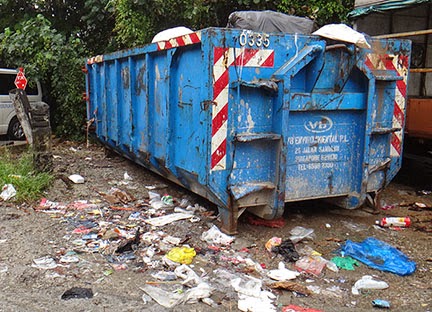 I stopped by Sungei Buloh Wetland Reserve. The boom was still deployed under the Main Bridge.

At Kranji Reservoir Park, there were were lots of 'white stuff' floating in the water. Right next to the new Sungei Buloh extension. 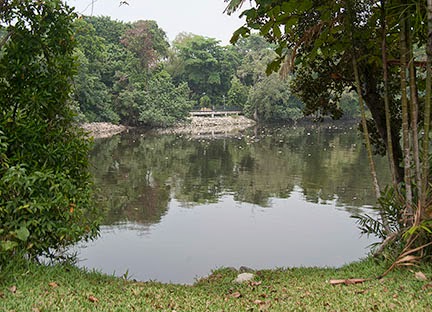 The beautiful new facilities at the Sungei Buloh extension overlooks the ominous floating white stuff. Are they dead fishes? They were too far away for me to confirm. 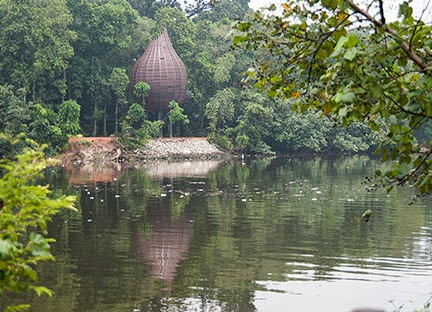 But on the eastern side of Kranji Reservoir Park, there seems to be a permanent presence of fishermen. There was a guy sleeping in the shelter with plastic bags of what look like belongings. 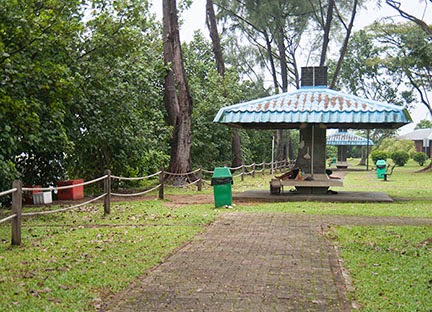 And boxes near a well trodden path to the shore. 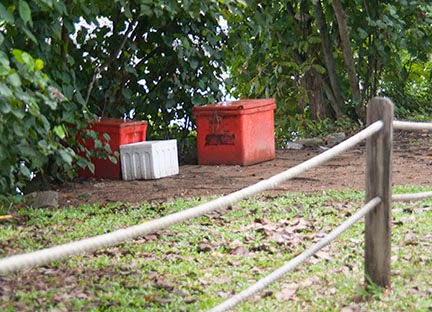 Here, a kayak was moored next to what looked like a driftnet, which had trapped all kinds of floating debris. 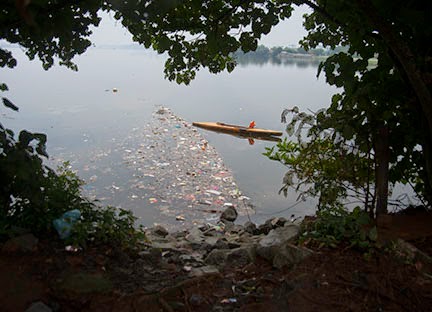 And it appears there are quite a number of dead farm fishes among the debris. 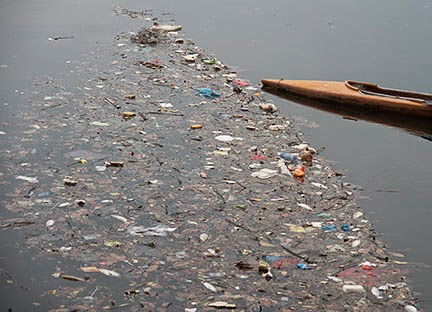 A closer look at the dead farm fishes. 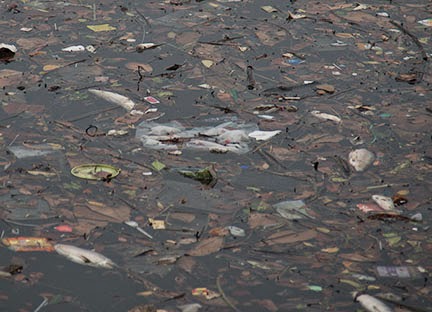 Here's a video clip of this.
Some of the fishes look freshly dead. Has 'new' dead fish been recently dumped near Kranji as well? 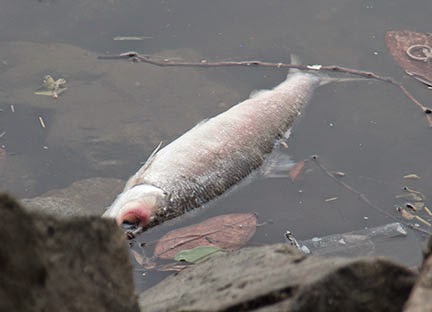 Alas, there are signs of irresponsible fishing on the shore, including abandoned driftnets on the seawall. These nets will continue to indiscriminately kill marine life until they are removed. 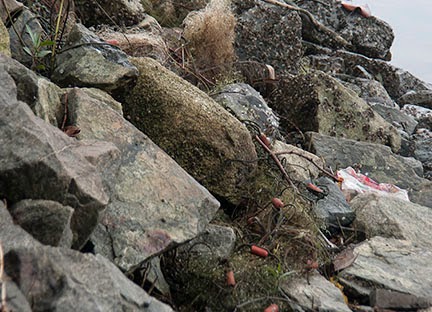 On the far eastern side of the Kranji Dam, I could see little white floating things. But it was too far for me to check and I was wet, tired and depressed. 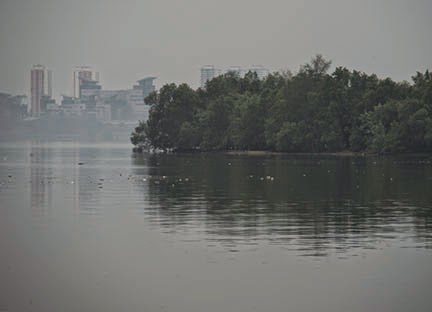 As usual, all recreational beaches are cleaned. Tax payers have to foot the bill for dumping by irresponsible people. 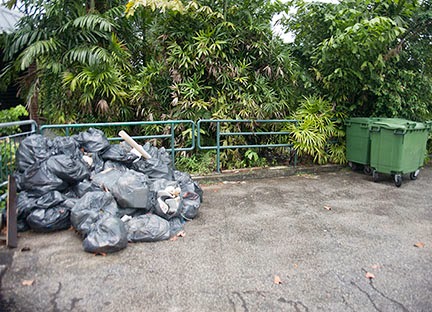 Wouldn't it be better for the environment, and save manpower and cleanup costs, if our coastal fish farms were provided a way to responsibly dispose of their trash?

Once again, I would like to highlight that the authorities should work together to provide all fish farmers a practical and reasonable way to accommodate their trash needs. Today, every business and household on the mainland and every ship parked in port is provided with daily door-to-door trash collection. But all coastal fish farms licenced by AVA are NOT provided with a similar service.

Did the dead fishes come from Malaysian fish farms?

From Google Earth, we can see that the Malaysian fish farms are mostly the west of Sungei Buloh Wetland Reserve. There are far more fish farm structures on the Singapore side than on the Malaysian side. There are about 60 Singapore fish farms near Lim Chu Kang and Sungei Buloh. These are all licenced by AVA who ostensibly regulate farming practices. The yellow line along the Johor Strait is the international boundary between Singapore and Malaysia. 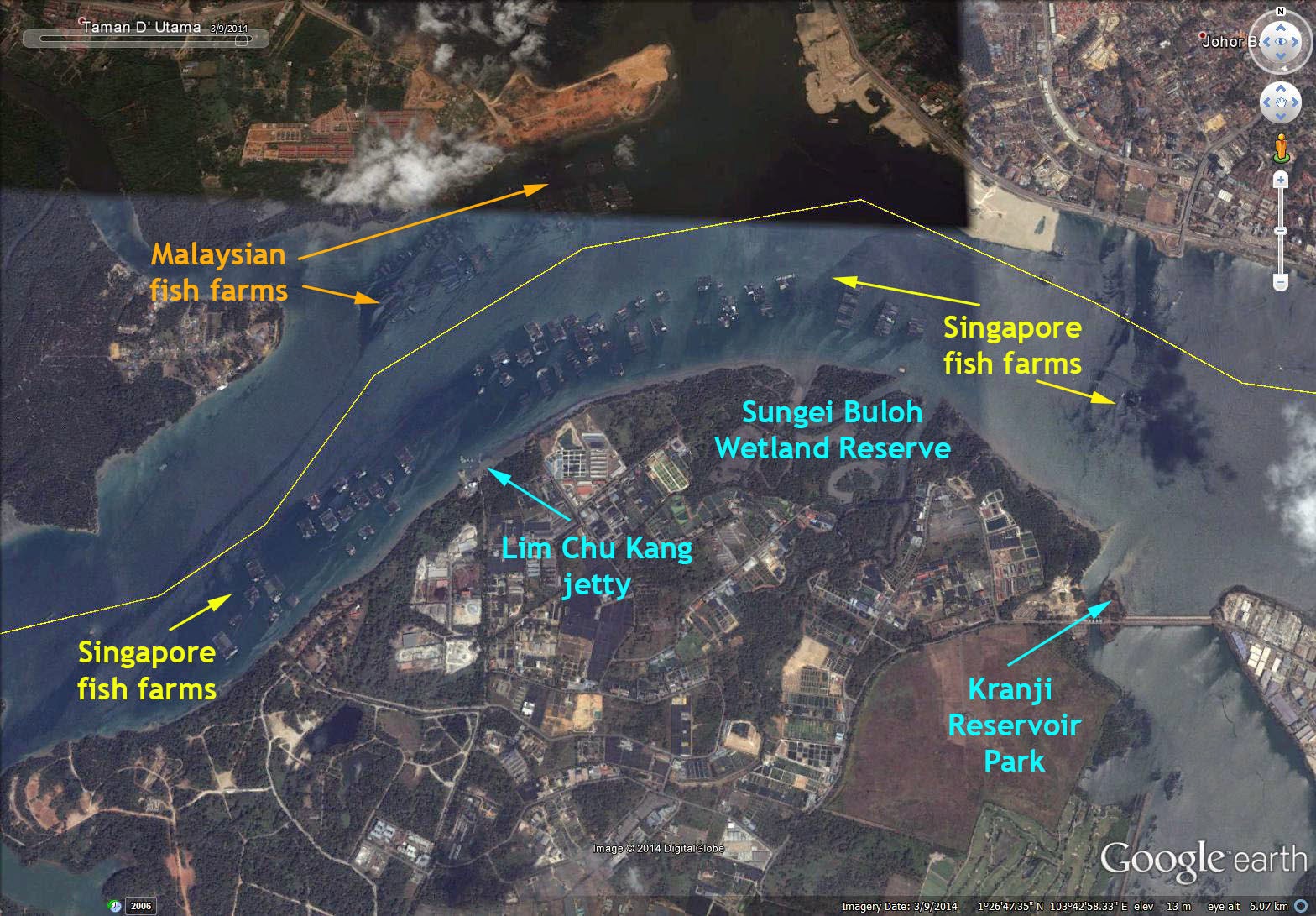 A closer look at the structures shows that on the Singapore side, most of the fish farms have structures that look like cages for fishes. 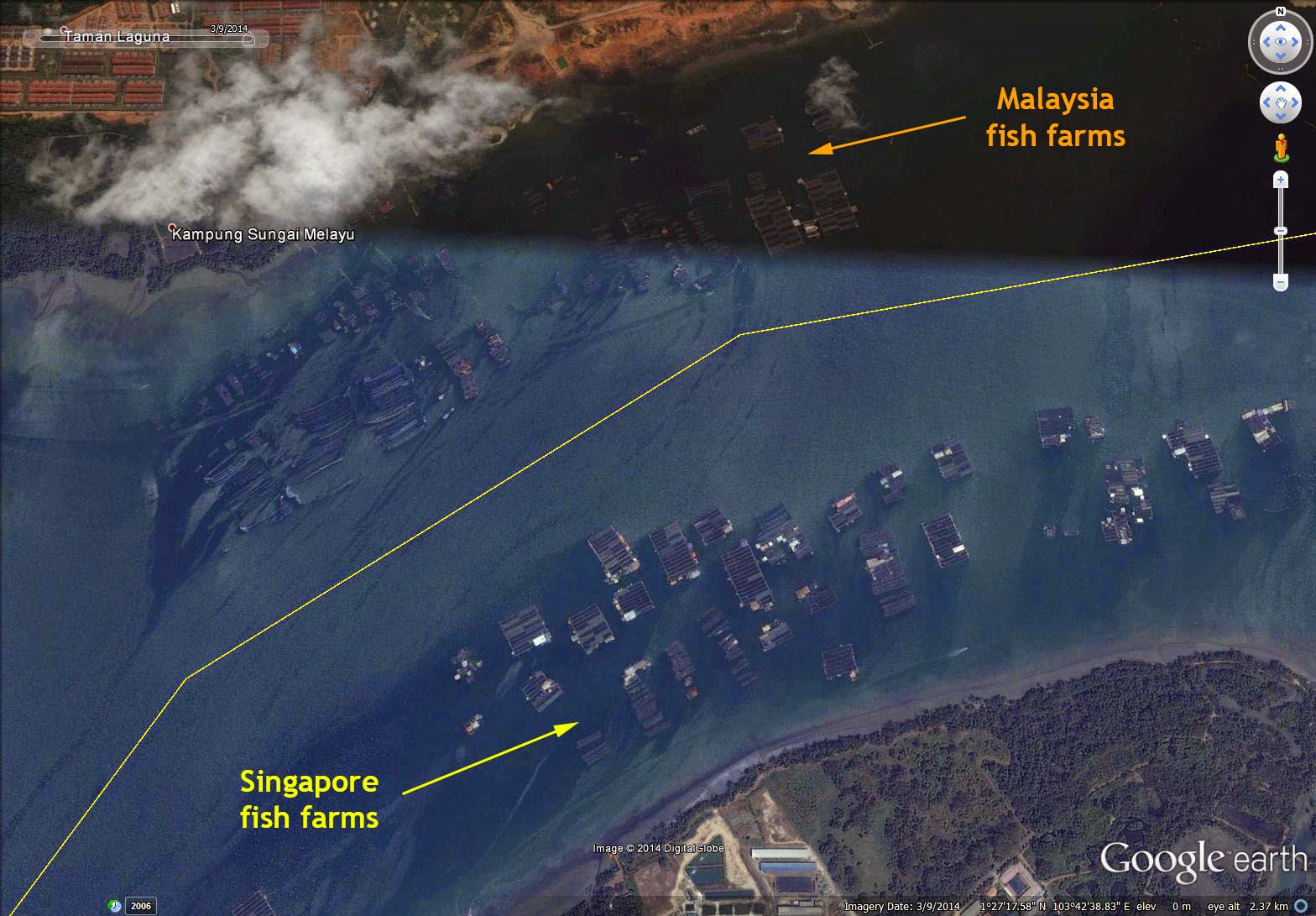 While on the Malaysian side, many of the structures look like those used to culture mussels or clams on ropes. There are few structures that look like cages for fishes. 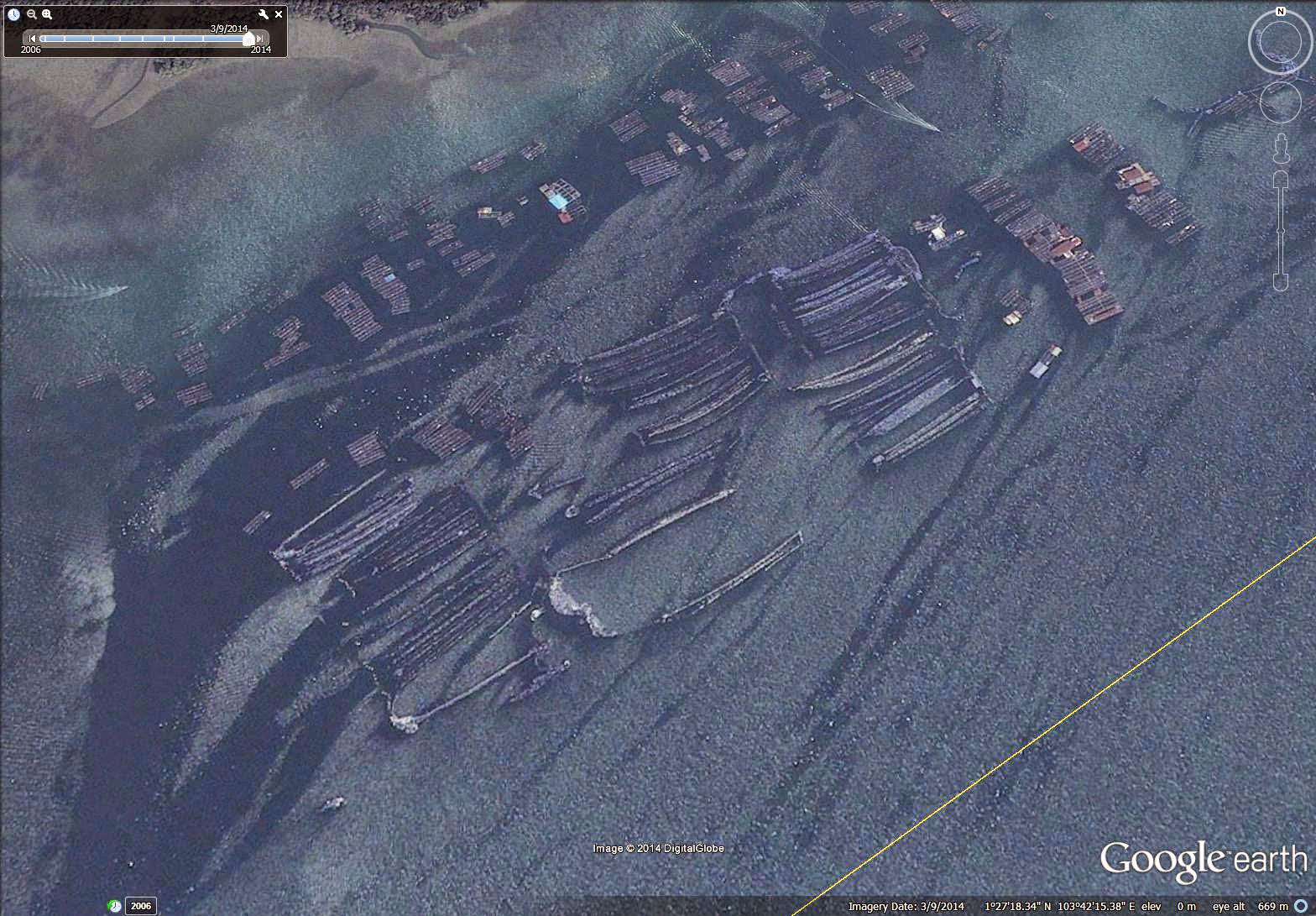 [Update 24 Oct: Channel 8 News carried a story about the dead fishes at Lim Chu Kang on 22 Oct. They used some of my photos and video clips, with permission. Glad they were useful!]
Posted by Ria Tan at 3:03 PM