What the fish? Figuring out dead fishes at Sungei Buloh

We checked on the dead fish situation early this morning. With a quick stop at the makeshift jetty at the end of Lim Chu Kang that is used by Western fish farms. 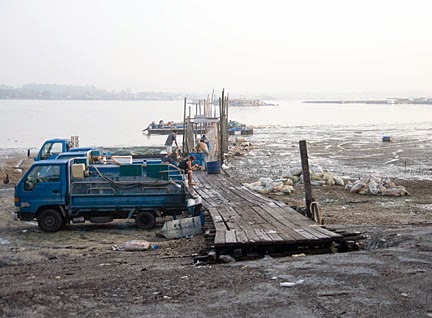 We also pondered about the dead fishes: what kind of fish are they? Do Singapore fish farms raise these fishes? A few of us employed The Google and came up with some answers and lots more questions. 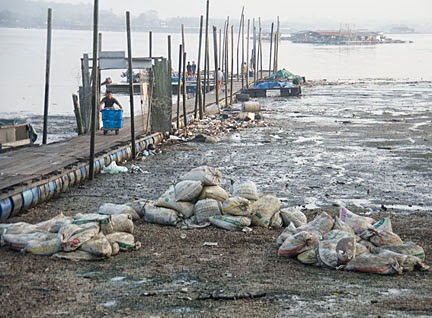 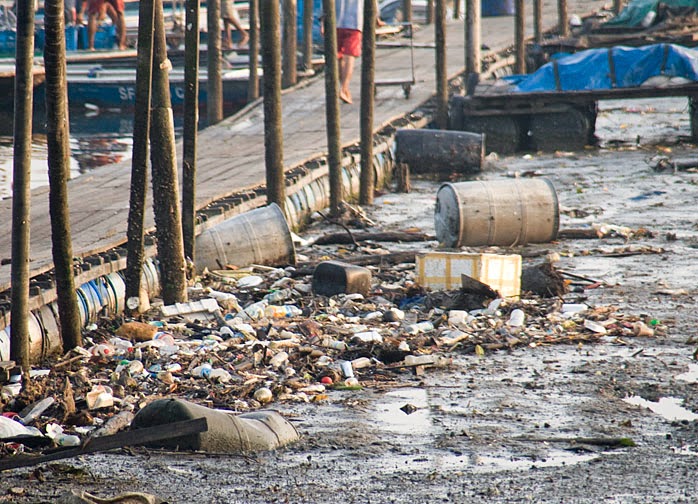 After we started photographing and poking at the bags, men starting opening and spreading around the shells contained in the bag. I think they use the shells to firm up the ground so that vehicles can drive down to the shore. 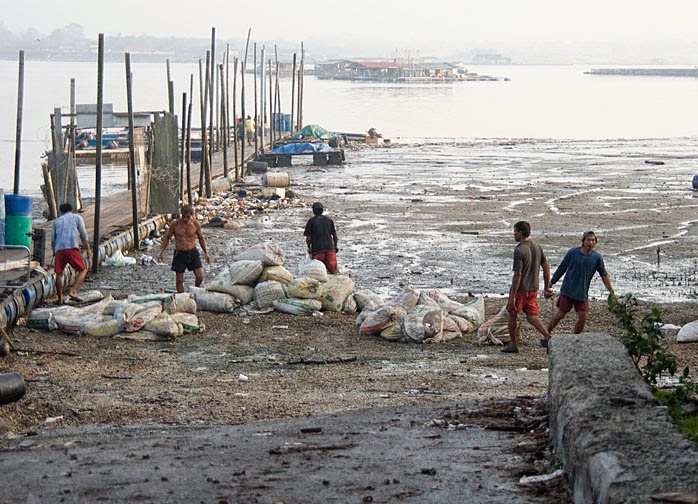 Another view of the road merging into the jetty with trucks and lorries lining up there. Large blue drums are a major component of the jetty and fish farm structures. The one in the photo looks like it has been in the water for some time with encrustations on one half of it. 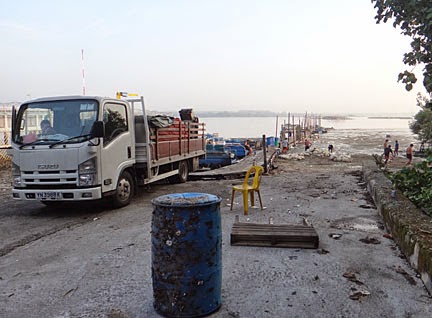 At the end of the jetty is a large tank and a smaller bin, provided by AVA for Western fish farms. The farms are supposed to bring their trash to the shore and dispose them in these containers. There is now a sign warning about crocodiles. 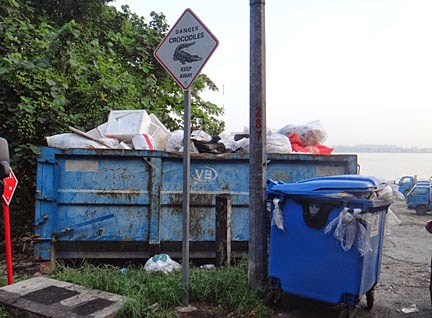 The tank is huge (Ivan is in the photo for scale), and is very full. There was no distinctive smell of dead fishes from the trash. Ivan, who could walk better on the shore, saw only a few dead fishes on the Lim Chu Kang shore, the same kind of dead farmed fish that we saw at Sungei Buloh two days ago. 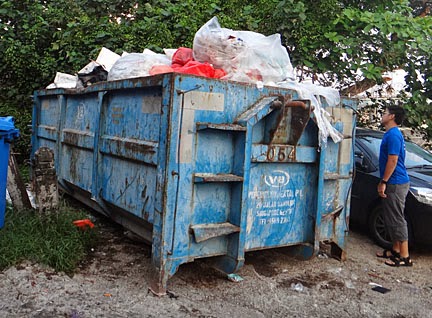 We then headed to Sungei Buloh Wetland Reserve and enjoyed a beautiful morning on the Main Bridge during low spring tide. 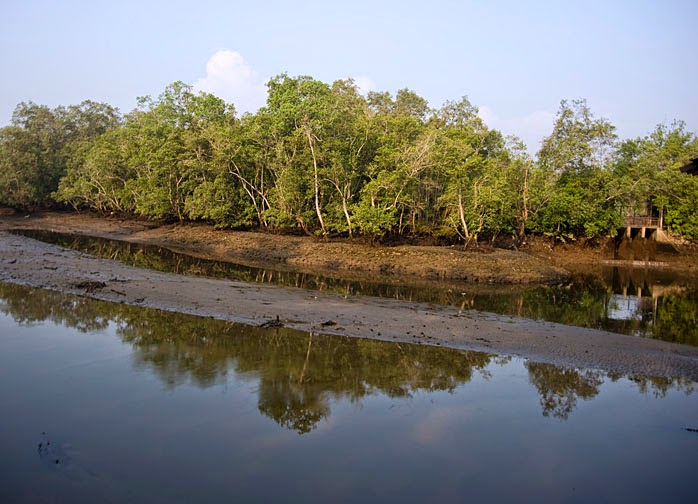 There were only a few dead farm fishes floating in the water. Much fewer than yesterday and the dead fishes were in more advanced stages of decomposition. 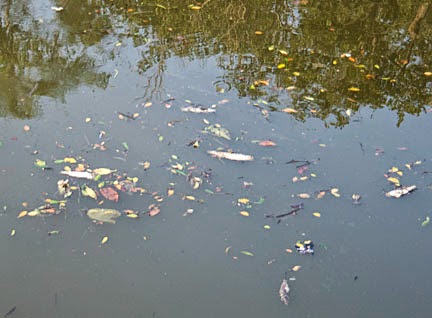 There were only a few dead farm fishes stranded on the stream edges. They were clearly starting to rot. Although there was a whiff of dead fish on the way to the Mangrove Boardwalk, there was no longer the stench of salted fish that permeated the area two days ago. I didn't see any other kind of dead fishes aside from this particular kind. 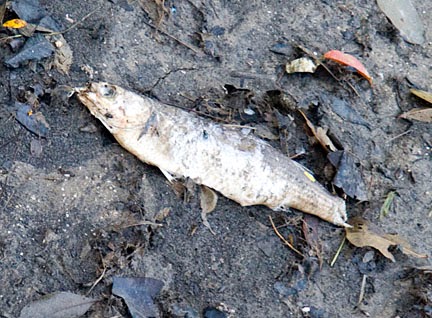 The low water was teeming with wild fishes that seemed to be behaving normally. 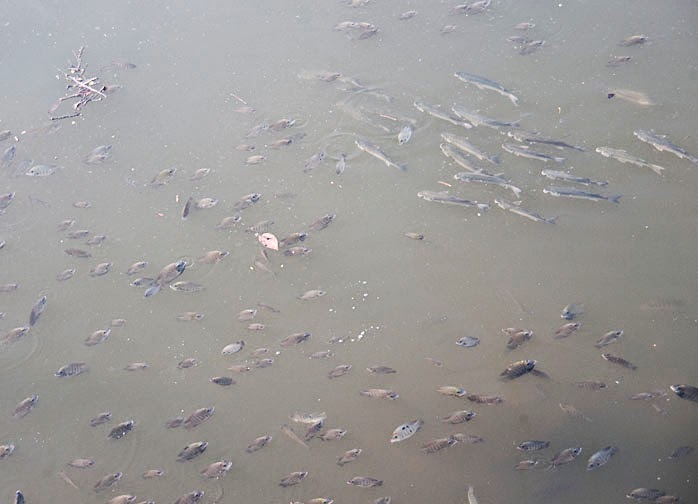 These look like Tilapias, which are sensitive to low oxygen and thus often 'gasp' for air at the water surface during low tide. 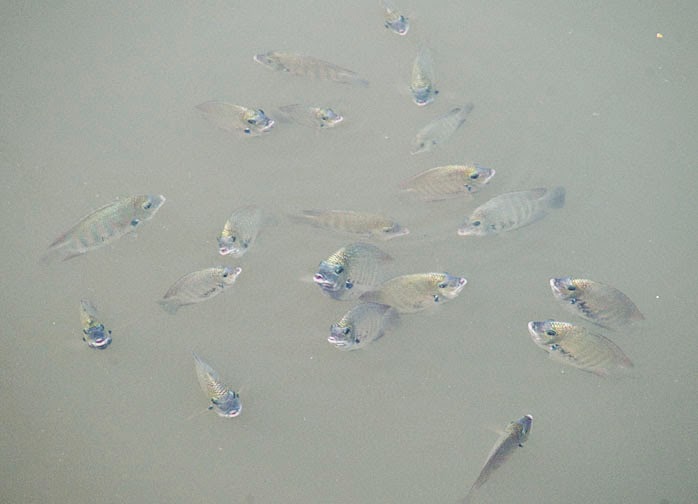 These are our native mullets. [Correction on 20 Apr 14: thanks to Shannon Lim of OnHand Agrarian these are not native mullets but grey mullets (Mugil cephalus), "note the forked tail and grey colour. The locals have square tails." he pointed out. Ivan Kwan added: "If I'm not wrong, there are also other species of grey mullets with forked tails native to Singapore waters, such as the greenback mullet (Chelon subviridis), tade mullet (Chelon planiceps) and longarm mullet (Moolgarda cunnesius); at least, these are the species I see listed as being present in Singapore on FishBase and on some local fishing websites.] 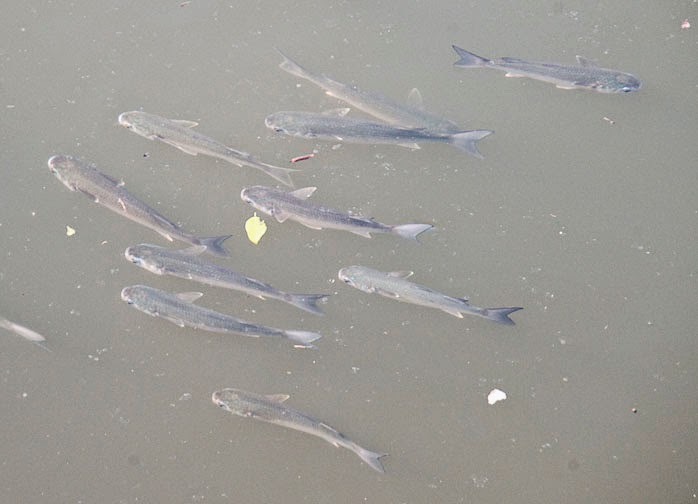 There were many of these gudgeons along the stream edges. Thanks to Ivan for these fish IDs. 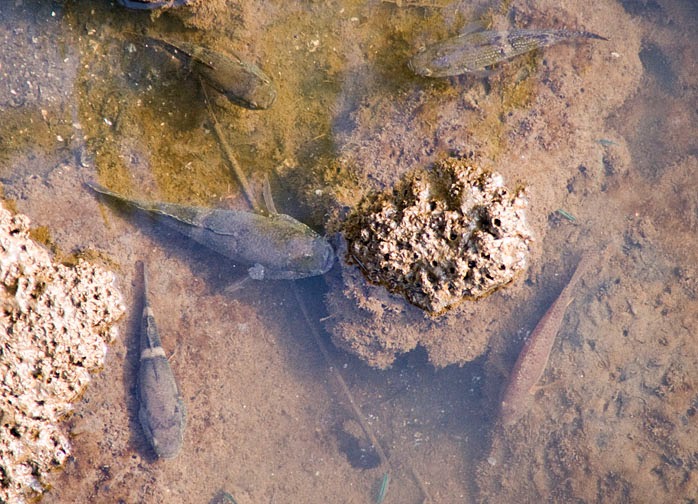 There was a little crocodile and it ignored the dead fish. I heard, however, that the monitor lizards in the Reserve are less choosy. 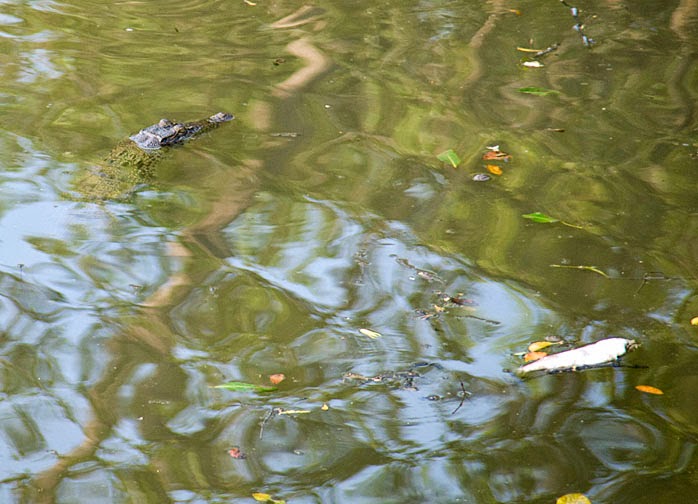 We had a quick look at the Mangrove boardwalk and only saw a few dead farm fishes. This one stranded on the very high shore was swarming with flies. The high spring tides of the last few days have whooshed in and deposited these dead fishes and other trash high up on the shore. 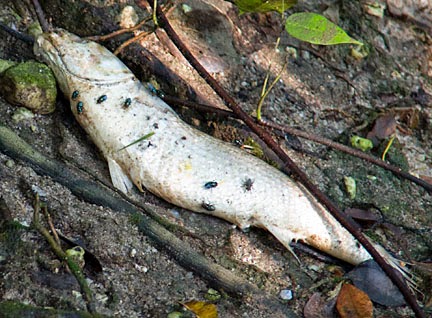 The mudskippers were still healthy and active on the mudflats. 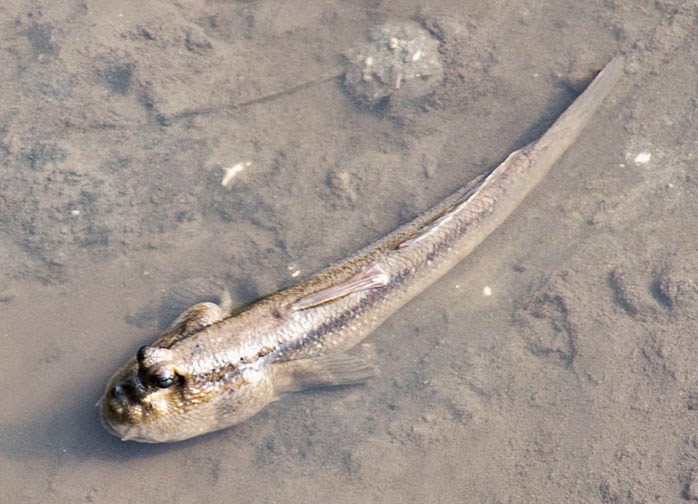 As well as other shore critters like Mr and Mrs Fiddler crab here. 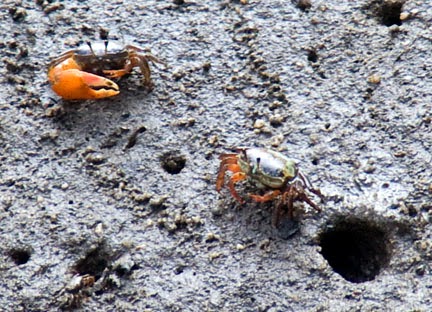 Indeed, it seems there are no longer any more freshly dead farm fishes floating onto the shores here. Some of us were wondering: what kind of fishes are they, the dead farm fishes that floated in to rot at Sungei Buloh since two days ago?

What kind of fish?

According to the Straits Times, the dead farm fishes are grey mullets. Which are imported and different from our wild square-tailed mullets. The dead farm fishes are probably Flathead grey mullet (Mugil cephalus) which according to the Food and Agricultural Organisation of the United Nations (FAO); "has been farmed for centuries in extensive and semi-intensive ponds in many countries. In Taiwan, nearly 40 percent of the total commercial production (fisheries and aquaculture) of Mugil cephalus has been pond reared since the 1960s, being cultured with carp in ponds."

Metropolitan Fishery Group (MFG) "the major shareholder of Singapore's largest marine fish farm" has on its website a page about the grey mullet that it farms. 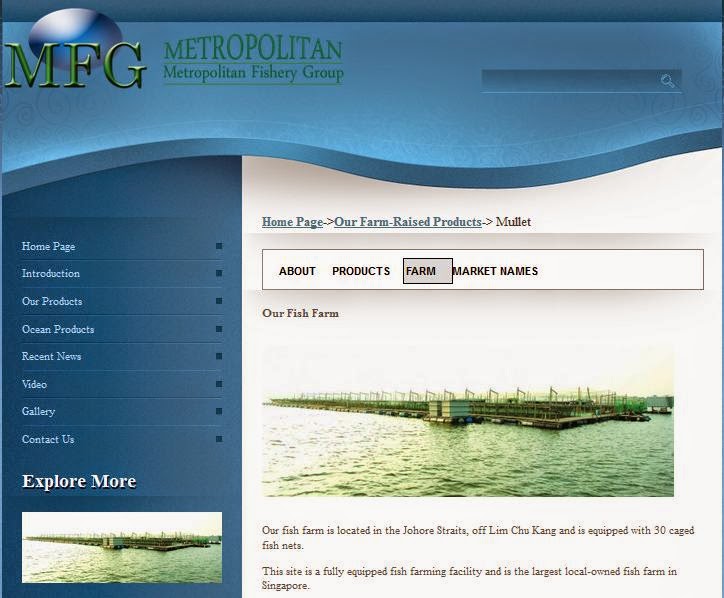 The website explains why 'wild catch mullets' are not raised at the farm. 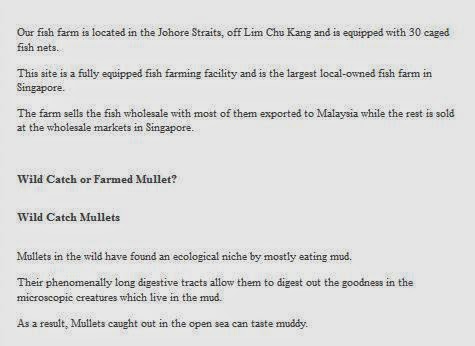 And why farmed mullets are tastier. 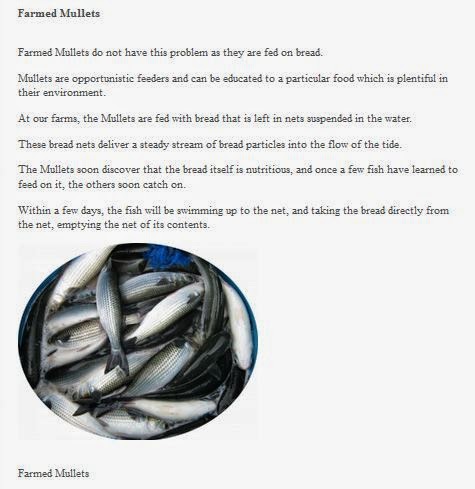 Here's the text on their website, and I'm surprised to read that most of the Metropolitan Fishery Group's farmed mullet is exported to Malaysia! (highlight in red, mine)


Our fish farm is located in the Johore Straits, off Lim Chu Kang and is equipped with 30 caged fish nets.

This site is a fully equipped fish farming facility and is the largest local-owned fish farm in Singapore.

The farm sells the fish wholesale with most of them exported to Malaysia while the rest is sold at the wholesale markets in Singapore.

Mullets in the wild have found an ecological niche by mostly eating mud.

Their phenomenally long digestive tracts allow them to digest out the goodness in the microscopic creatures which live in the mud.

As a result, Mullets caught out in the open sea can taste muddy.

Farmed Mullets do not have this problem as they are fed on bread.

Mullets are opportunistic feeders and can be educated to a particular food which is plentiful in their environment.

At our farms, the Mullets are fed with bread that is left in nets suspended in the water.

These bread nets deliver a steady stream of bread particles into the flow of the tide.

The Mullets soon discover that the bread itself is nutritious, and once a few fish have learned to feed on it, the others soon catch on.

Within a few days, the fish will be swimming up to the net, and taking the bread directly from the net, emptying the net of its contents.

Mr Malcolm Ong, chief executive officer of Metropolitan Fishery Group, has been featured showing the mullets raised at his farm in this Straits Times photo gallery on 14 Jan 2013. 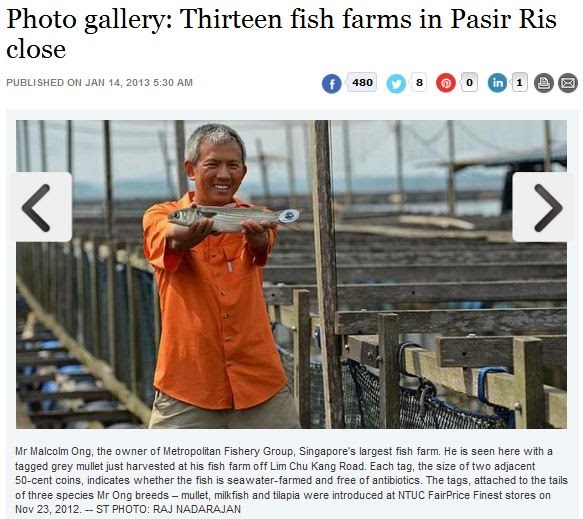 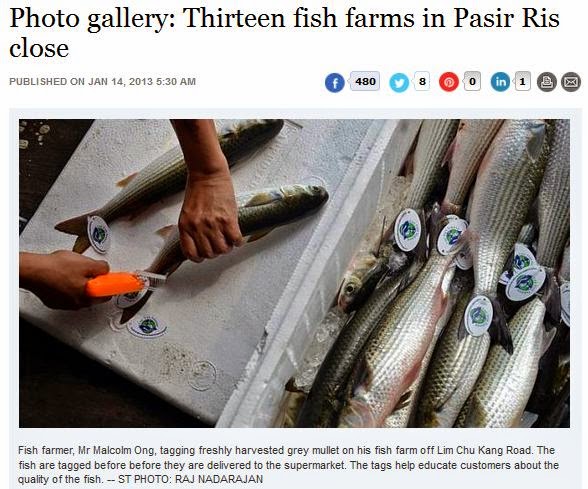 During the July 2013 mass fish deaths which killed 90 tonnes of mullet and milkfish, Mr Malcolm Ong, chief executive officer of Metropolitan Fishery Group was quoted in the New Paper as saying "while trying to rescue its stock, [his] farm released some dying fish to "at least give them a chance to swim away".

Other issues about farmed grey mullet?

According to the FAO factsheet on grey mullet: "Most of the [global] commercial aquaculture production of flathead grey mullet still depends on fry collected from the wild, which is cheaper. Seed produced through artificial propagation is used on a limited scale in Italy and Hawaii."

The FAO fact sheet also lists the many diseases that affect this fish.

Here's more questions that we have yet to be able to find answers to:

Where does the broodstock for flathead grey mullets raised in Singapore come from? If it's of foreign origin, do they provide the most efficient conversion to protein? This would be especially important if the broodstock and fry of the mullets raised in Singapore are from Taiwan - where they would likely be adapted to more subtropical or temperate climates. Have there been experiments with locally-sourced broodstock, or at least from Thailand/Malaysia/Indonesia, where the populations would presumably be better adapted to tropical climates?

If the dead mullets that floated up to Sungei Buloh Wetland Reserve did not come from the Singapore Western fish farms, where did they come from? Do the Johor fish farms raise mullets too? Did they experience any mass deaths? If the deaths are not due to poor water quality, what killed the grey mullets? Disease? Parasites? Does this signal the need for international and inter-agency cooperation in highlighting pollution events or other phenomena that could impact aquaculture and fisheries on both sides of the Johor Strait?

If you have any answers, or other questions, please do share in the comments. Thank you!