Crocodiles galore at Sungei Buloh on a drizzly day

Awesome crocodiles! Lots of feeding egrets and herons. And great company made for a perfect way to celebrate the end of the drought in Singapore! 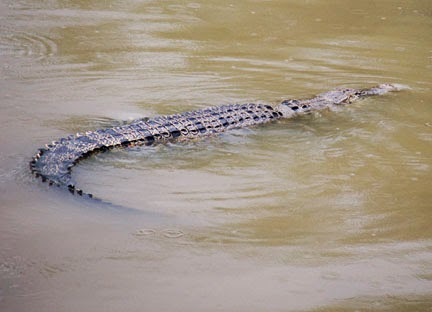 My intended brief visit turned out to be a lovely lazy drizzly day watching wildlife at the Main Bridge of Sungei Buloh Wetland Reserve.

It poured, after nearly 30 days of zero rain! Of course it happened on the morning that I planned to visit Sungei Buloh to 'test drive' my recovering broken foot. When the thunderstorms eased in the afternoon, I decided to make a short trip anyway. And was delighted to meet up with many friends who also made the same spontaneous decision! My plan was to see if The Foot with Stick could walk the uneven gravelly path past the Main Bridge. 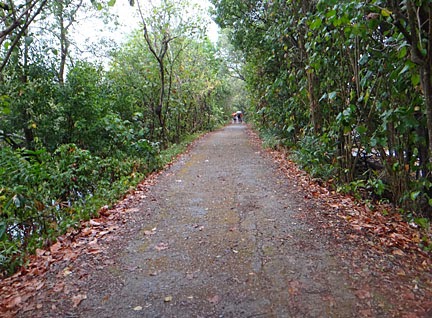 We got distracted by a gianormous Batik golden orb web spider (Nephila antipodiana). I tried to distinguish her tiny boyfriend from other parasitic spiders that just live in her web and steal her food (which her boyfriend also does). I think this little reddish spider might be her boyfriend, it's definitely a boy spider because he has a pair of huge palps. Spider sex is complicated.

We also spotted the intriguing Mangrove St. Andrew's Cross spider (Argiope mangal) which holds its 8 legs to form a X and often also creates two or four white lines on its web. 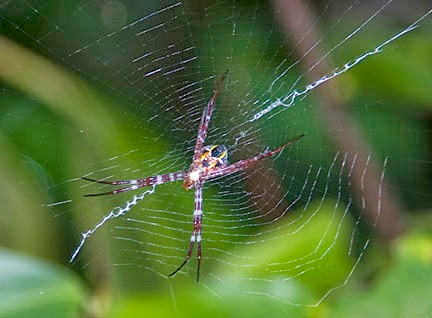 We spotted a Plantain squirrel (Callosciurus notatus) chewing bark off this tree resulting in flying chips of bark. Is it looking for animals living under the bark? This mammal lives like a bird! It lives in trees and effortlessly 'flies' from branch to branch in death-defying leaps. Its chirpping calls are often mistaken for bird calls. It even creates a spherical nest of twigs and leaves to raise its young. 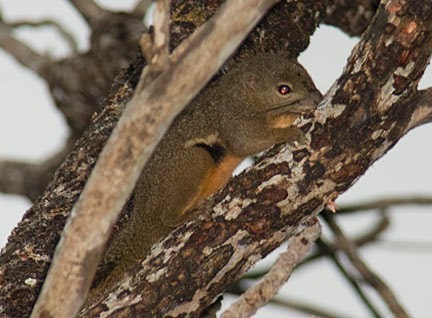 As I wobbled slowly down the path, with a walking stick, we kept running for shelter as it rained sporadically. I only managed to get as far as the rare Tumu berau (Bruguiera sexangula) before the rain made us head back. I'm glad to see this tree is still there and flowering nicely with some propagules forming.

Fortunately, there was a great deal of action at the Main Bridge. The egrets were all lining up along the shore as the tide fell. And the two large crocodiles were making like logs in the water. 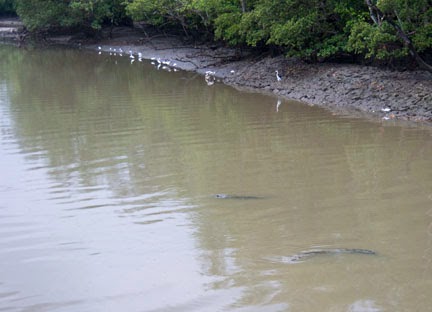 There was a smaller crocodile much further away. Although it looks small, we estimate it could be about 1m long.

The small crocodile slunk away when an egret walked by. 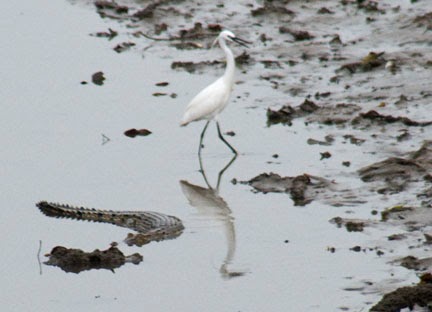 As the tide fell, all kinds of shore birds tall and taller, waded out to fish. 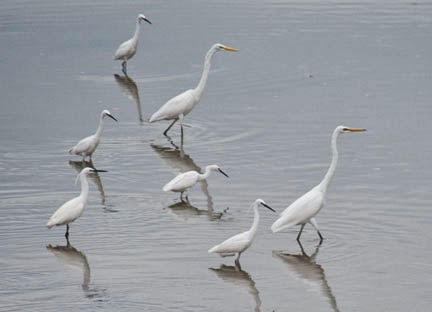 The Intermediate egret caught a prawn. 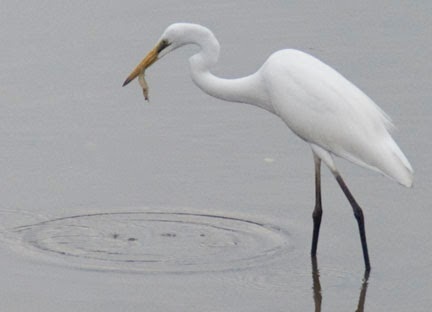 The Grey heron seems to have caught a prawn too. 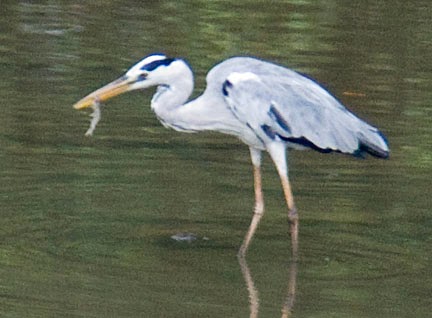 This Little egret seems to have caught a mantis shrimp! 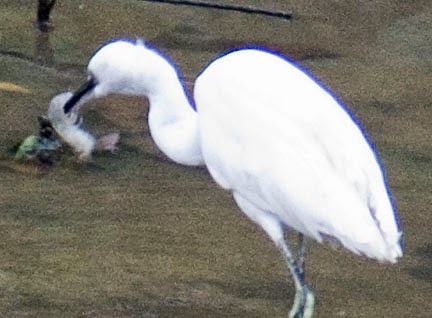 Near the sluice gate, a line up of Little egrets furiously peck at the water surface. Eating insects? 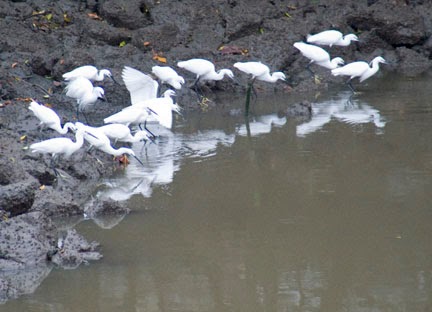 A beautiful Purple heron stalked nearby, and caught some large thing that I missed. 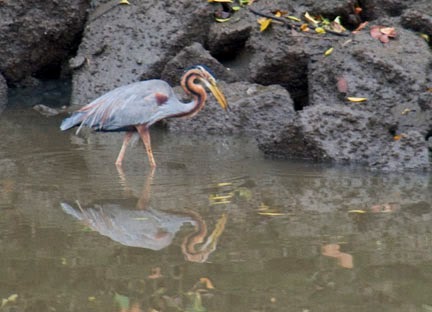 Eventually the crocodile dubbed "Half tail", because it lost half of its tail, settled right under the bridge. Unfortunately, the Uncle in the pink t-shirt decided to drop a coin on its head and the crocodile of course went away. 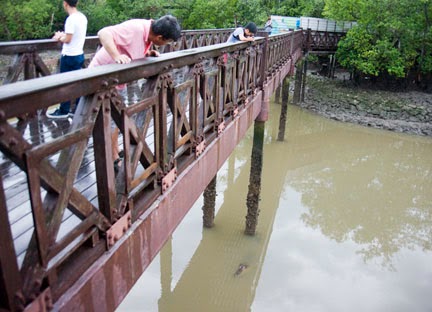 Here's a closer look at "Half tail" and its big teeth before it slunk away. 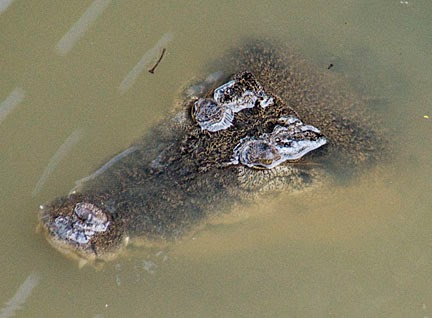 It was also a trip to try out the fabulous new waterproof bag that Zee gave me (and which unfortunately arrived after I broke my foot). The Bag is awesome! I also wanted to see if the Big Cam still worked. The camera was ok, but the battery died. Well it has been nearly 6 months that I stopped shooting. Fortunately, I had a spare. 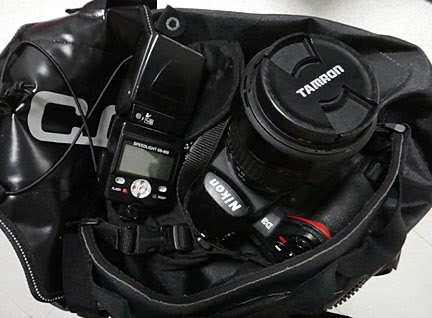 I'm glad The Foot, The Bag and The Camera, all worked out, more or less. As I inch back towards resuming field trips. Scary...!
Posted by Ria Tan at 6:56 PM