This afternoon, Pei Yan and I decided to check out the stretch of Pasir Ris after Carpark E. Not surprisingly, we found a refrigerator, probably dumped here. The nearest thing on the seaward side are fish farms. There are also farms on land nearby. 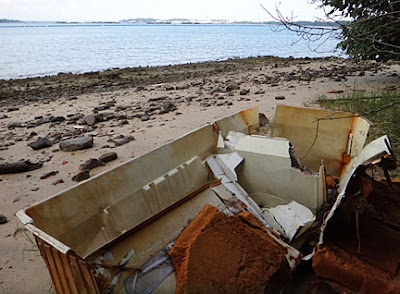 Today, International Coastal Cleanup Singapore is busy all across the island as thousands of volunteers gather data about the litter on our shores.


Pasir Ris Park beach proper is cleaned regularly. But where the park boundary ends, the trash begins because the area is not as regularly cleaned. Pei Yan's school was supposed to do this stretch for ICCS but at the last minute, her students couldn't make it. But we went anyway, to check out the situation. ICCS will do this beach in the coming weeks. 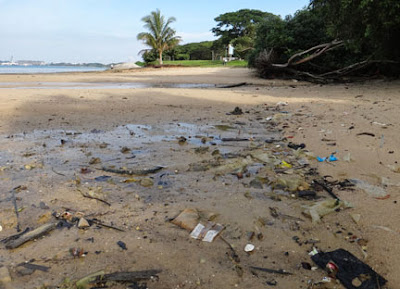 Among the litter, many look like they came from the fish farms located just off the shore. There were several bags with labels showing that they used to contain fish feed.

Also large bags that used to contain rice and sugar, as well as detergent. 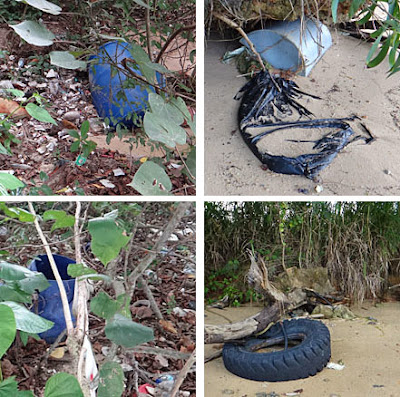 Several of the tyres half or almost fully buried in the sand.

There were black shading cloths, used in farms.

There were also these bunches of small narrow plastic. I suspect they are used in the fish farms.

There were also several heavy nets that look like the kind used by fish farms to create their cages. 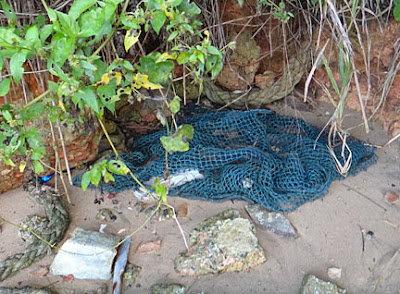 The area just off the high water mark is, as usual, full of small pieces of styrofoam and plastic that float in the water. 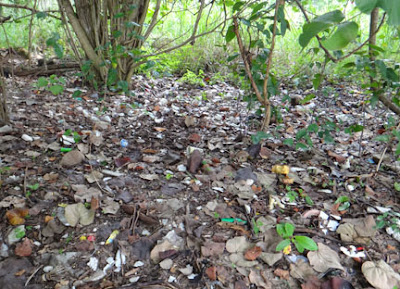 I have no idea what this used to be. 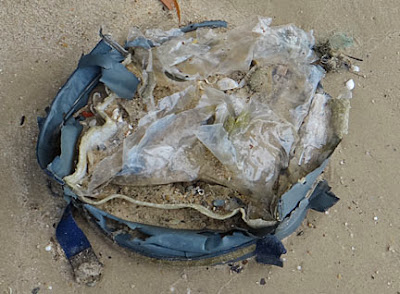 There is trash up this little stream. 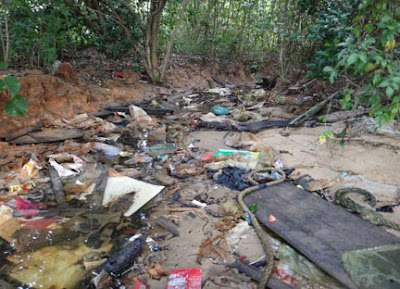 Here, I saw this bunch of plastic bags bunched with a cable tie. Probably dumped here. 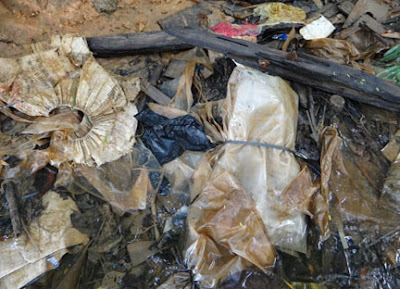 There were large ropes, too heavy to drift up to the shore. Also probably dumped here. 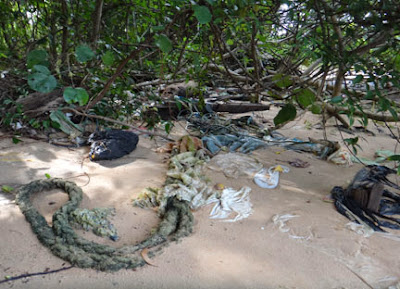 There were coils of abandoned fishing net here and there. 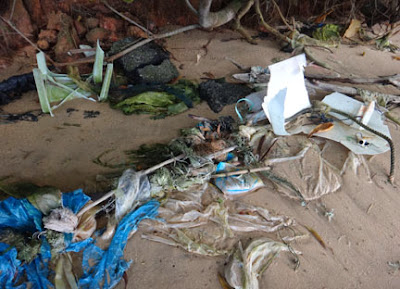 I have no idea what this was. 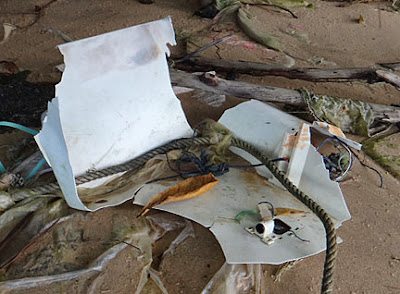 We walked right to the end of the beach, marked by large tyres even on the low shore. 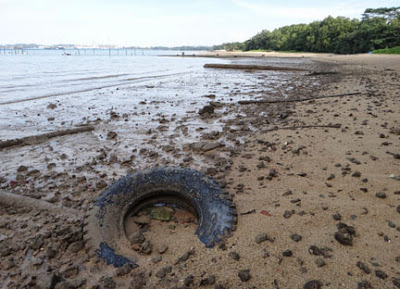 Every now and then, we were distracted from the trash by the wildlife in the area. The Sea hibiscus were blooming. The yellow flowers turn orange in the afternoon! 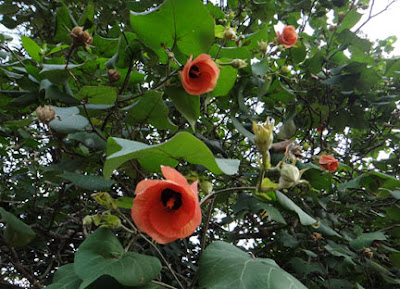 I came across these Nerite snails, I'm not too sure what exact kind they are. 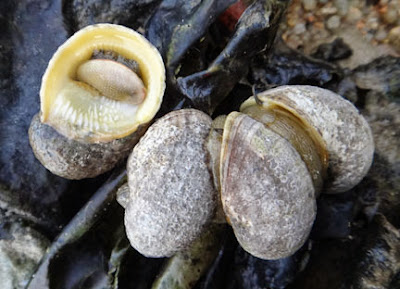 There were shorebirds too, out near the waters' edge. 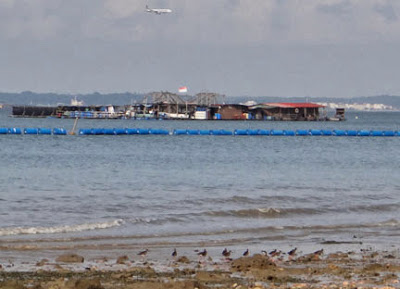 Pasir Ris Beach is a great place to spend a lazy weekend. In a hammock, in a tent, fishing, walking, cycling and having a BBQ. For a few years, Pasir Ris was the only beach in Singapore where the water quality failed. At that time, I did wonder whether the fish farms had anything to do with the poorer water quality. 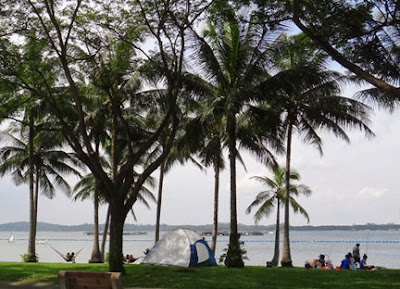 Pei Yan pointed out that there were huge brown bins placed next to every BBQ pit at the beach (blue arrows). This is in addition to the usual smaller bins (pink arrow). 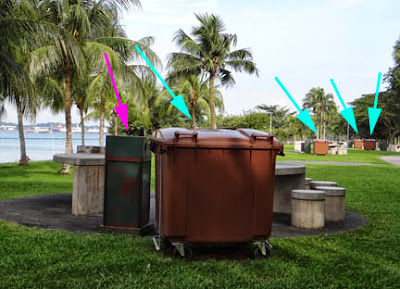 Many signs in the Park remind users to throw litter in the bins provided. I wonder whether fish farms are provided with a reasonable and practical way to dispose of their trash responsibly? 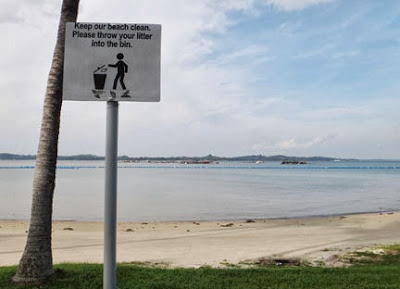 The tide was not low enough today to see the trash that settles on the low water mark, out of reach of the cleaners who regularly clean Pasir Ris Park. Here's the trash I saw there last month. Trash on our recreational beaches costs taxpayers $1.4m a year to clean up! Wouldn't it make more sense to prevent as much trash from being tossed into the sea in the first place? By providing fish farms with a reasonable and practical way to dispose of their trash responsibly.

Pei Yan and I also observed some mysterious goings on, which I've described in this separate post.
Posted by Ria Tan at 10:33 PM