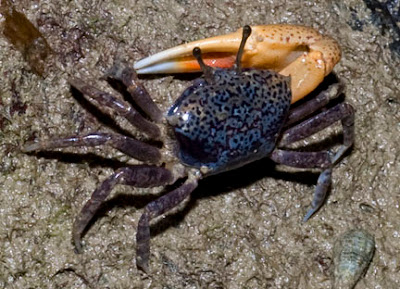 Other highlights include Saron shrimps, colourful hermit crabs and more. Amazing for an artificial shore that was hit by a massive oil spill in 2010.


Here's what the fiddler crab looks like from the front. It is quite large and it doesn't look like the fiddler crabs we often see on our shores. I'm not sure what kind of fiddler crab it is and what it's doing on the seawall! These crabs are usually found on flat bottoms. Pei Yan looked and couldn't find another one. [Update: Thanks to Ivan Kwan who pointed out that this might be Uca tetragonon which Kok Sheng first found at Sultan Shoal lighthouse. Later, Dr Tan Swee Hee conveyed that Prof Peter Ng believes this is a large Uca dussumeri. We will know for sure when Prof Peter has a chance to take a closer look at it.] 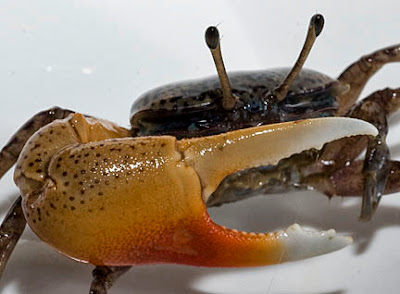 I saw several Saron shrimps (Family Hippolytidae) lurking in crevices among the rocks. They are quite well camouflaged! 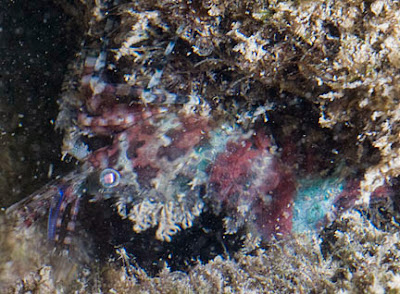 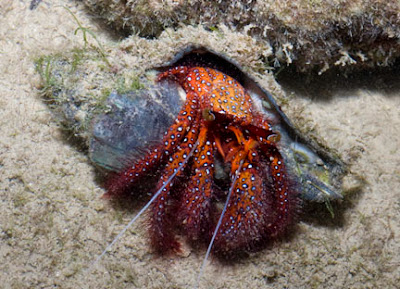 I sense that not all the Banded hermit crabs we see on our shores are alike. This one has dark bands on its body with a pair of bright pink spots. And its short tentacles and eyestalks are not colourful. 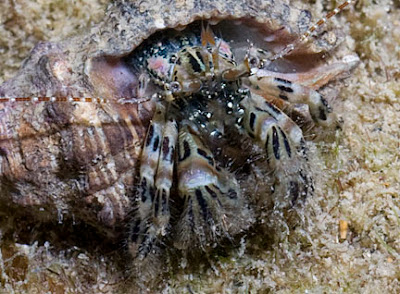 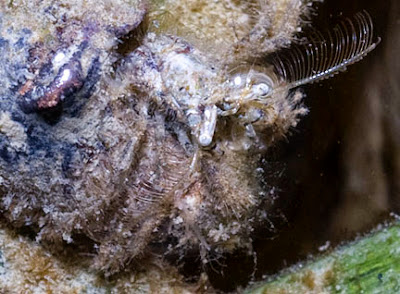 There were also many colourful Swimming crabs (Family Portunidae) of various kinds. Most were small (body under 10cm wide).

There are a few corals growing on the seawall and most of them looked alright. I didn't see any that were bleaching. There were many small Pore corals (Porites sp.) and Favid corals (Family Faviidae), and I saw one small colony of Anemone coral (Goniopora sp.). 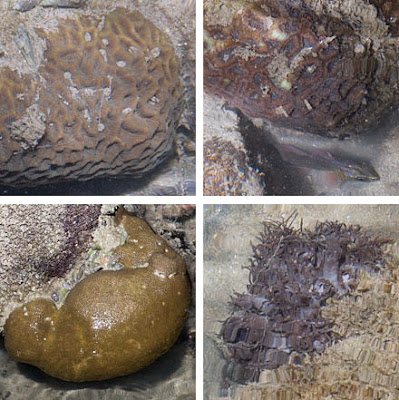 As night falls, all kinds of colourful reef fishes start to peep out from among the rocks. Like this pretty blue one. I don't really know what it is. 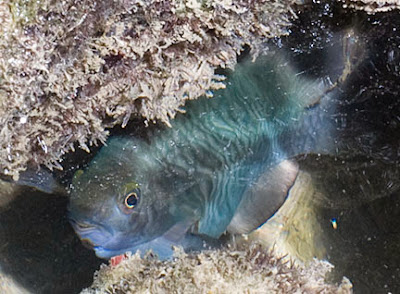 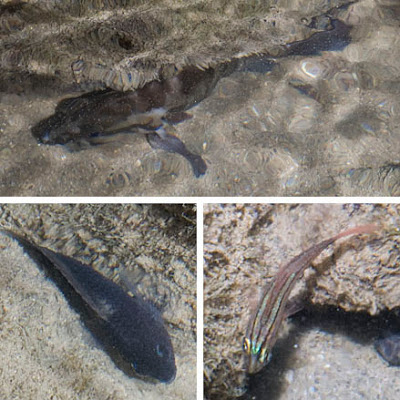 There are, of course, lots of gobies (Family Gobiidae) of all kinds all over the place. They are often very well camouflaged. 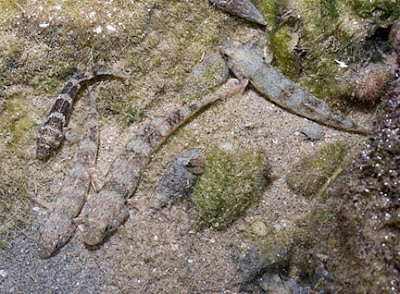 I came across a baby Giant top shell snail (Trochus niloticus). It is distinguished by the wavy outline of the base of the shell.

While the smaller Spotted top shell snail (Trochus maculatus) has a smooth circular base. The animal is rather colourful and 'fluffy' with tentacles of various sizes and arrangements.

The patches of  Smooth ribbon seagrasses (Cymodocea rotundata) continue to expand! We think this one must be about 20m wide. In Singapore, this species of seagrass is only abundant at Chek Jawa and Cyrene Reef. 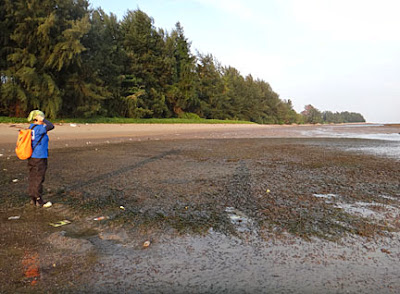 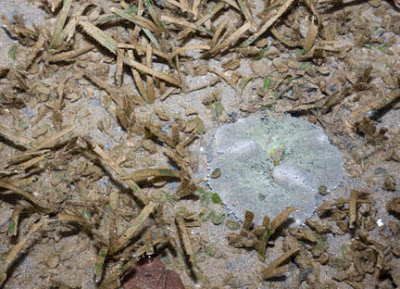 Most of the Ribbon seagrasses were heavily covered in scum, more properly called ephiphytes. Where the blades are clean were large clusters of  Bazillion snails (Batillaria zonalis). Did they graze off the epiphytes? 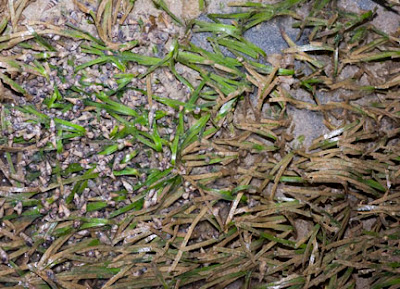 I saw one and Pei Yan pointed out several more of these large Garlic bread sea cucumbers (Holothuria scabra) near the seagrasses. 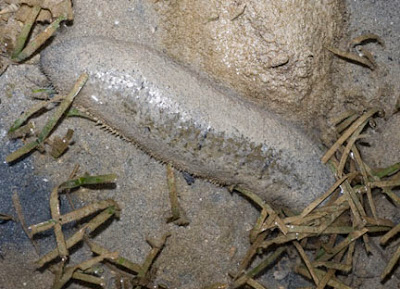 I also noticed these regular grazing marks on the Ribbon seagrass blade where something had 'cleaned' off the scum growing on the leaf. I saw similar marks at Pulau Hantu yesterday on Tape seagrass. 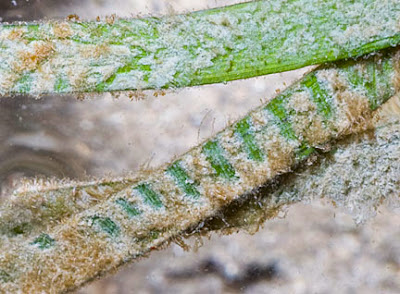 The patch of Tape seagrass (Enhalus acoroides) further along in the lagoon is still doing fine and has lots of female flowers. I've seen this clump bloom many time since the oil spill. 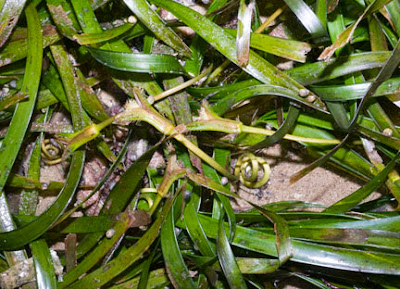 The small patch of Sickle seagrass (Thalassia hemprichii) is still there although the leaf blades look a little short and cover is rather sparse. It was dark and windy (which ruffles the water surface) so I couldn't get a good photo of the patch. 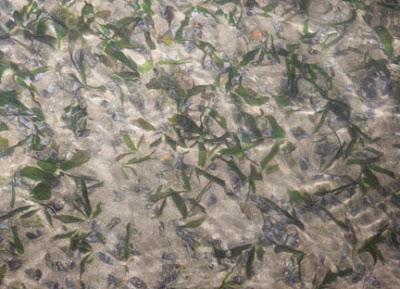 International Coastal Cleanup Singapore did a clean up of this shore recently. The big pile of black bags are probably the result of their hard work. Alas, new trash just keeps washing up on our shores. 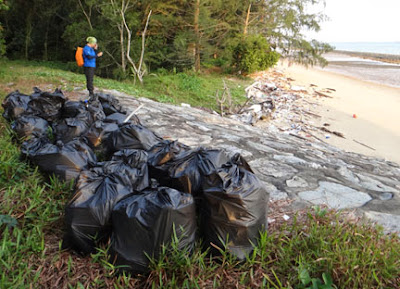 There are still signs of the massive oil spill that landed on this shore in 2010 and was not cleaned up. Streams show and poop of burrowing Acorn worms (Class Enteropneusta) show the crude that is still buried beneath the sand.

We enjoyed a glorious sunset at the start of our trip, as the low spring tides at this time of the year start at sunset. My last proper survey of this shore was in May 2013. 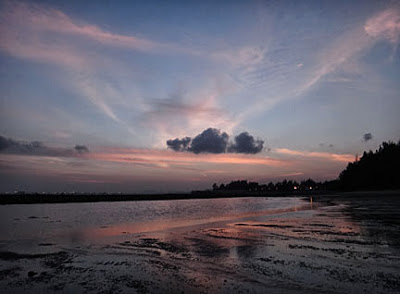 Corals have settled naturally on Tanah Merah's artificial shores! We need a super low tide to see them, so I didn't see them today. Here's a look at the reef in June 2013 when we also saw otters here. We also visited in June 2012. It was Kok Sheng the Human Climbing Crab who first told us about it. And he surveys it regularly, sharing awesome photos of this reef on his blog: 2011 and 2010 and 2009. 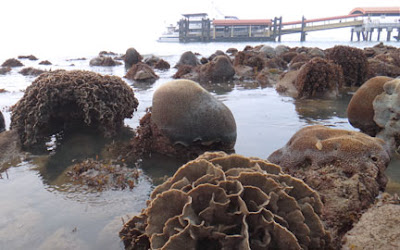 The artificial shores of Tanah Merah are an unintended experiment which shows that beautiful and interesting marine life can settle naturally on seawalls and artificial structures!

More about the oil spill on this blog and on the Oil spill facebook page.

More beautiful photos of amazing critters in Marine animals crowd at Tanah Merah on a beautiful sunset by Pei Yan.
Posted by Ria Tan at 3:11 PM