The rocky shores at Punggol Jetty were dotted with small Crown sea star (Asterina coronata). Most of them are drab and blend with the rocks, but a few might be bright orange! 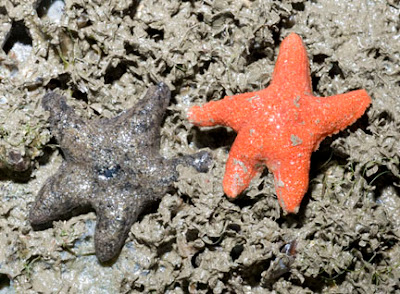 I also had a closer look at some disturbing large trash on this shore.

The rocky shore west of the Jetty seemed a little bare compared to my last trip here in Jan 2013. There were only sparse growths of two main kinds of sponges: Blue elegant branching sponges (Haliclona sp.) and Purple branching sponges (Callyspongia sp.). There were only one or two patches of other kinds of sponges and few of the blob ascidians that were so common on my last trip. There were also few Green mussels (Perna viridis). This shore is very methodically and frequently harversted. 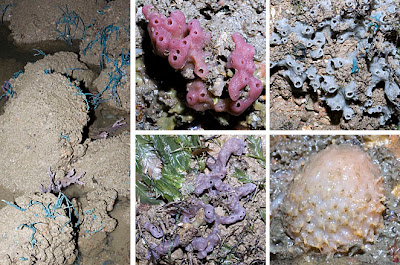 There were still lots of the iconic Burgundy anemones (Bunodosoma goanese) all over the rocky shore. So far, we haven't seen these sea anemones on other shores in such numbers. As well as lots of tiny sea anemones coating the rocks in countless numbers including Lined bead anemones (Diadumene lineata) and Anthopleura dixoniana. I saw one and one Mini carpet anemone (Stichodactyla tapetum) and a Petal-mouthed mangrove anemone. There was also a Slender sea pen (Virgularia sp.). But I didn't come across the large Haddon's carpet anemones (Stichodactyla haddoni) I saw on past trips. Rene saw more as she checked out the deeper water and saw sea fans and cerianthids too. 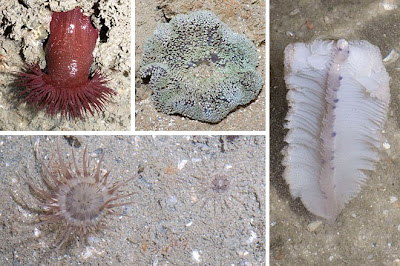 There were lots of crabs on the shore, including this pair of Flower crabs (Portunus pelagicus). The male flower crab holds onto a female that is about to moult so he is the first one to mate with her when the time come. Crabs can only mate when the female moults. 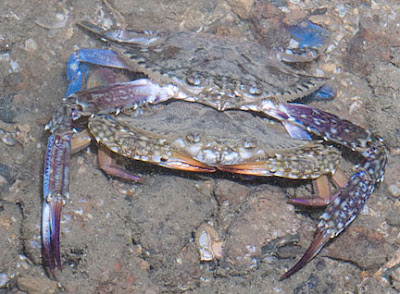 There were also lots of these colourful Powder blue-clawed swimming crab (Thalamita crenata). There were also many Stone crabs (Myomenippe hardwicki) and lots of Purple climber crabs (Metopograpsus sp.). 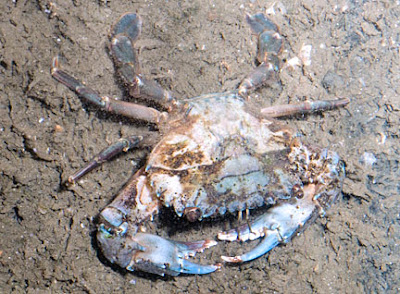 Also abundant on the shore were many Black sea urchins (Temnopleurus sp.), often in clusters and 'carrying' bits of debris. 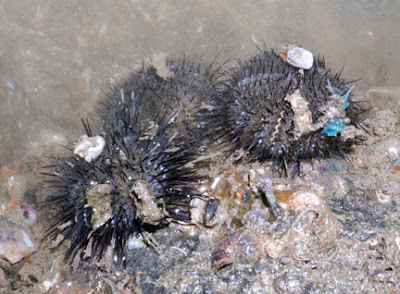 I came across a pair of Ovum cowries (Cypraea ovum) and many small brittle stars. 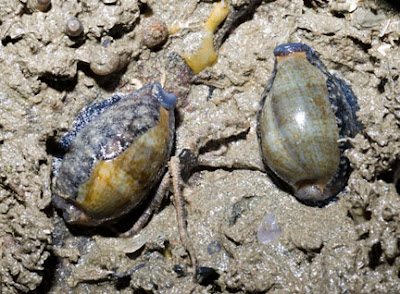 Among the most abundant animals encrusting the rocks were Worm snails (Family Vermitidae). These snail produce long coiling shells stuck onto the rock. But like most other snails, they have an operculum (yellow arrow) and a pair of tentacles (blue arrows). 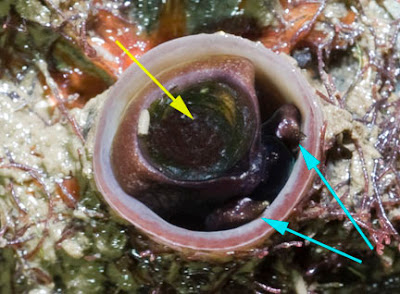 Under rocks there are lots of animals including this pair of tiny snapping shrimps. 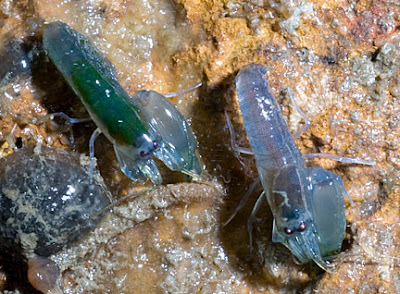 The small patch of rocky shore near the jetty is full of life. The only two nudibranchs I saw were found there: Hoplodoris nodulosa and Dendrodoris fumata.

There are seagrasses here and all the patches I checked out were Hairy spoon seagrasses (Halophila decipiens)! There were also large patches of Caulerpa seaweeds but we couldn't find any slugs in them. 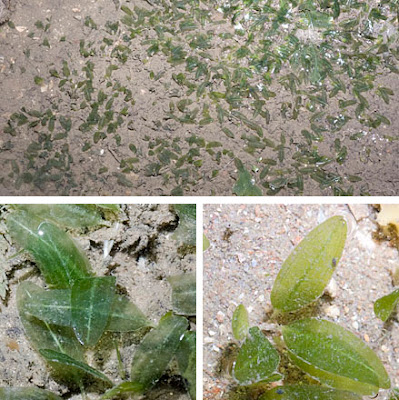 Unfortunately, there was a large blue drum stranded in the middle of the sponge-encrusted rocky area near Punggol Jetty. 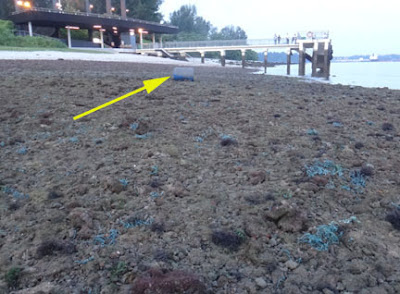 The blue drum was encrusted so it was probably sitting there for some time. It seemed quite empty and I had a closer look at the label on the drum. According to Shannon Lim on facebook: The drum "probably [came] from one of the coastal farms. These barrels cost about $60 used & unwashed and are tied to beams as floatation. Every now and again they break off and drift away. By the way, unwashed barrels usually contain a few hundred ml of residual chemicals that farms either leave inside or just dump overboard." 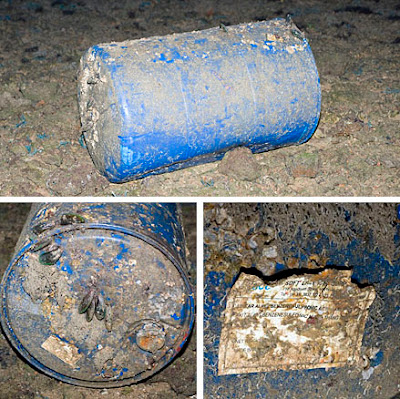 I took the label home to clean it up carefully without tearing it. The label is for "linear alkyl benzene sulphonic acid" which according to one producer of the chemical is used to prepare detergents, pesticides for spraying, paint sprays (distempers and anionic specialty formulations), preparing fabric for dyeing. Here's a Material Safety Data Sheet for this chemical (pdf) which suggests it can be harmful to people and wildlife. 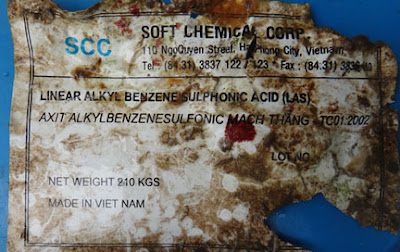 There were all kinds of plastic bags all over the shore. Most were plain or transparent bags about the size of rice bags. One was clearly a fish meal bag.

A very long, broad (my foot for scale) blue plastic tubing thingy. What is it? According to Shannon Lim on facebook: "Looks like a disposable waste chute that we use in construction." 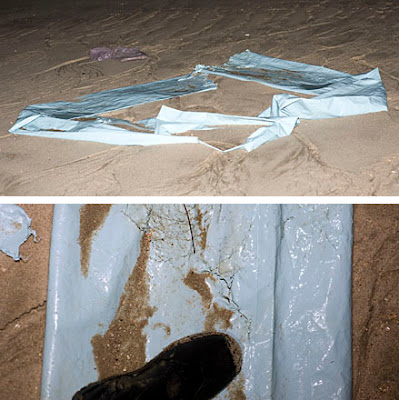 A bundle of small long plastic bags. What happened here? 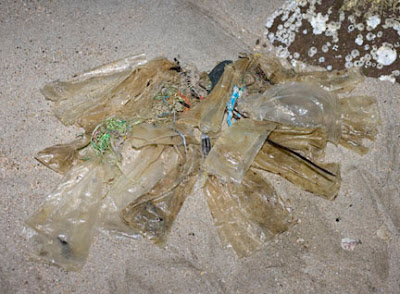 There was an encrusted gas tank. How did it get here? But I was glad to see no active fish traps (I saw one broken one) and no drift nets where we were (although these could have been placed in deeper water).

This stretch of rounded rocks lies opposite Pasir Gudang Port in Johor and near Pulau Ubin where lots of fish farms are located. I believe Punggol Jetty is one of the jetties regularly used by fish farmers.

Here's a Google Earth view of what's around Punggol Jetty. 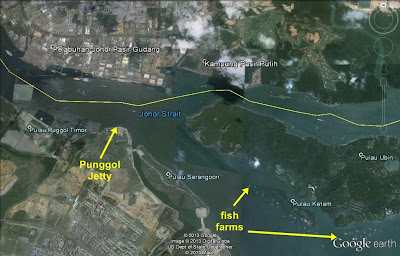 Our shores struggle against so many threats, it's important to visit them regularly to keep up with how they are doing. Tomorrow, I'll be checking out Pasir Ris.

More photos of this trip by Rene Ong on facebook.
Posted by Ria Tan at 5:56 PM