Alive at the Chek Jawa beacon

Has the coral rubble area at Chek Jawa recovered from the 2007 mass deaths of sea anemones, sponges and many other animals? We specially visited on a predawn low spring tide to find out. 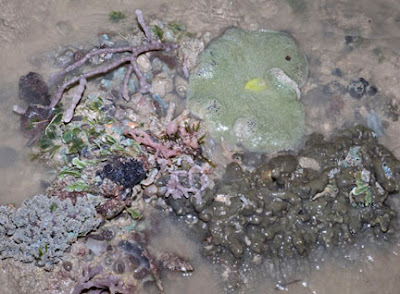 
Today, I saw scattered small clusters of one or a few kinds of sponges with other encrusting animals on the rubbly areas all along the sand bar west of the beacon. It's been six years since the mass deaths and yet the area has not fully recovered. 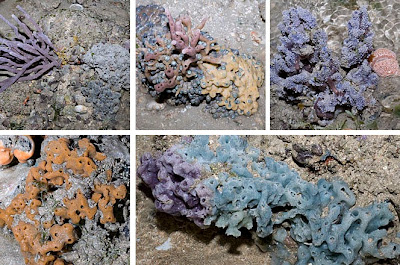 But the shore is still not as 'spongey' as it used to be a long long time ago. The photo below is of the Chek Jawa coral rubble area before the sponges were wiped out by the mass deaths in 2007. This incident is believed to have been caused by heavy rain and Kok Sheng did a study of Chek Jawa's recovery.

I saw one Pink flowery soft coral (Family Nephtheidae) and one Ball flowery soft coral. A surprise was to see several small and one large colony of Spiky flowery soft corals (Stereonephthya sp.) that are usually more commonly seen at Tuas. I managed to spot only one False cowrie (Family Ovulidae) in one of the colonies. 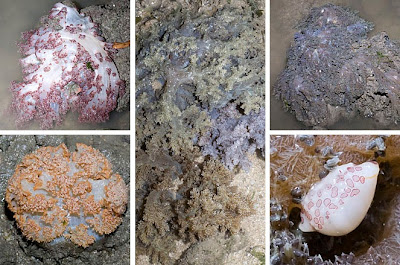 There were some sea fans, not as many as on Changi. The most common kind were Candelabra sea fans. I saw one Skinny sea fans, one Gnarled sea fan and one Sea whip. I couldn't find any commensal snails in the sea fans. There were also a few Stinging hydroids. 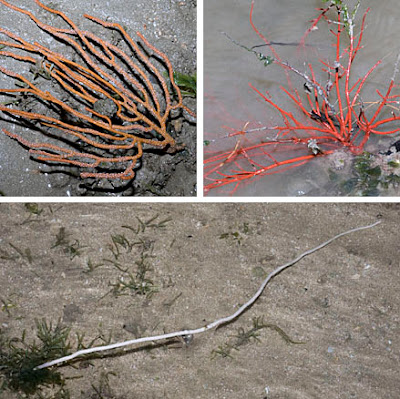 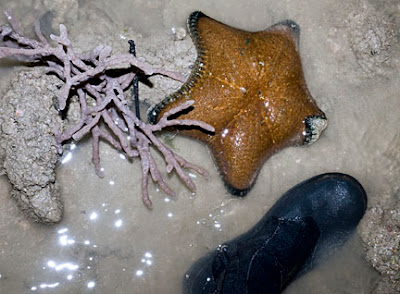 I was delighted to see many small to medium sized (about 30cm wide) coral colonies on the sandy areas near the beacon and even among the seagrasses. Most of them were Pore hard corals (Porites sp.). I saw one Neat hexa corals. Of course there were small clusters of Zebra corals (Oulastrea crispata) which is common on our Northern shores. 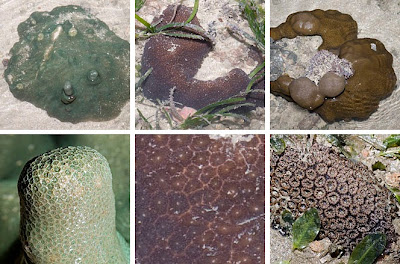 Some parts of the rubbly area were carpeted in Posy sea anemones. Just like at Pulau Sekudu. There was also an abundance of White ascidians today on the rubble. 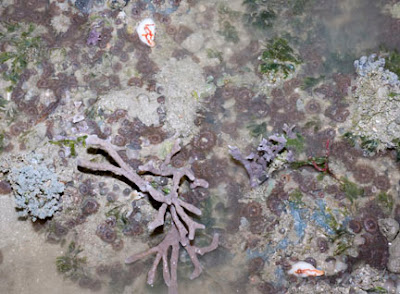 I saw several of these Fine-line flatworms. At first glance, they do look like Mermaid's fan seaweed (Padina sp.)! There were a few fan worms (Family Sabellidae). 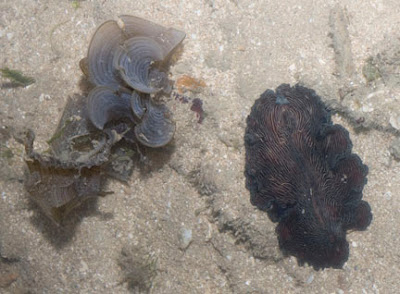 Oops, a pretty little Many-banded snapping shrimp (Family Alpheidae) that we rarely encountered. It rapidly vanished into its burrow. 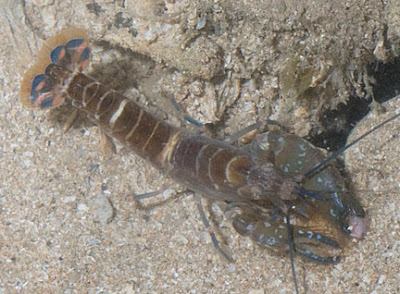 On the way out to the water's edge, we had a quick look at the legs of the jetty at House No. 1. They were full of life! Lost of sponges, ascidians and the animals that eat time, like common cowries and Blue spotted flatworm (cf Pseudoceros indicus). 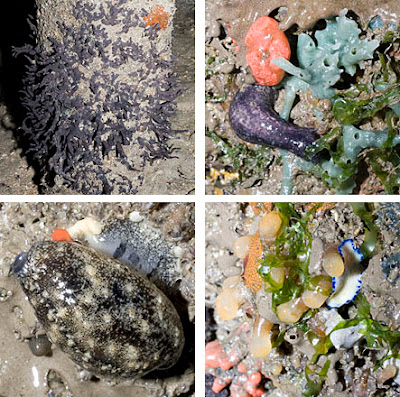 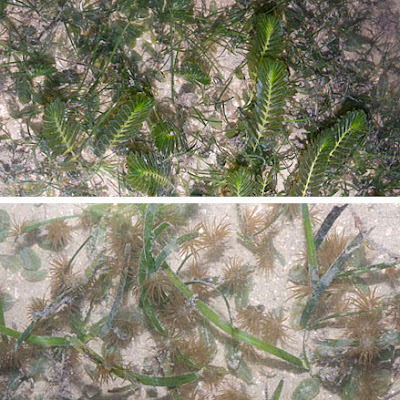 There were a few sand stars (Astropecten sp.) and many Biscuit stars (Goniodiscaster scaber) in the seagrass meadows. I also saw a few White sea urchins (Salmacis sp.), but not as many as at Pulau Sekudu or Changi.

There were also some sea pens, cerianthids and small sea anemones among the seagrasses.

Among the fishes I saw today included: many small Kite butterflyfish (Parachaetodon ocellatus) hovering together and near a carpet anemone, Halfbeaks (Family Hemiramphidae), Filefishes (Family Monacanthidae) a large fish that looked like a wrasse (Family Labridae). There were also many Rabbitfishes (Family Siganidae), toadfish (Family Batrachoididae). 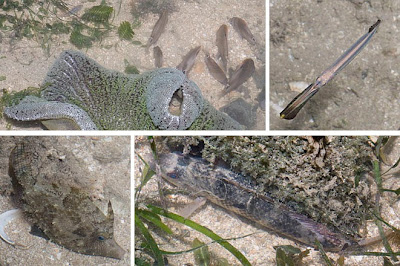 Kok Sheng highlighted some dugong feeding trails in the seagrass meadows! It was hard to take a good photo of them in the dark. 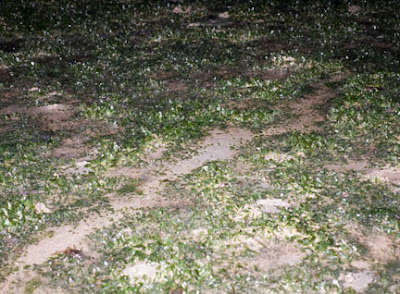 I noticed a few (less than 10) of the many many Haddon's carpet anemones (Stichodactyla haddoni) were rather pale. Hope they are not bleaching. As we approach the wet season, I always worry about the repeat of the 2007 mass deaths which lead to mass deaths of these sea anemones and other common marine life at Chek Jawa. 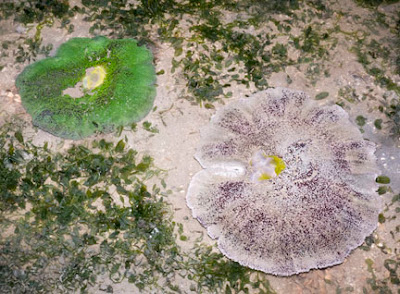 Today's trip started at 3am, under the light of the full moon and ended well before dawn. On the way back to the jetty, we noticed the wayang stage at Ubin Town is all decked out with glittering props and someone sleeping on the floor, possibly to guard everything overnight. It looks like the annual Seventh Month wayang sessions at Pulau Ubin is already on! 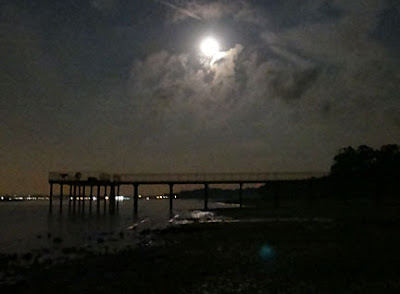 Fortunately, today we didn't come across any driftnets freshly laid on the shore.

More about why I think it's important to regularly survey Pulau Sekudu and Chek Jawa.