The Perepat (Sonneratia alba) trees on Pulau Sekudu are now totally denuded of leaves, except for the very low branches. 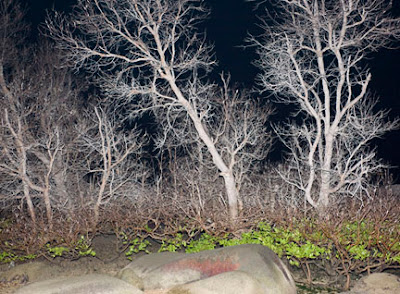 A closer look and I'm wondering if the caterpillars on the trees can tolerate being submerged?


These were lots of scary hairy caterpillars munching on the green leaves. 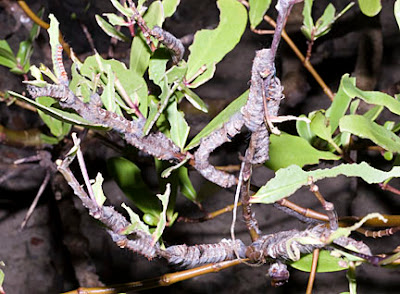 I notice that the leafy branches are all below the mid-water mark (as indicated by the dark colour on the nearby rock). This means that these branches would probably be submerged at high tide, especially at high spring tide. Indeed, a few of the caterpillars have their hairs clumped together as if they got wet. Can these caterpillars tolerate submergence at high tide? 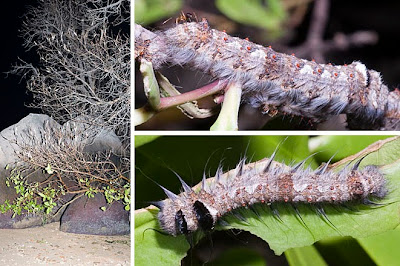 The Mangrove cannon-ball tree (Xylocarpus grantum) that grows in the middle of the island was bare of leaves on our trip last month. Today, I saw new leaves growing on the upper branches and lower branches. I still saw lots of cocoons on the tree.

On this trip, I checked out the western side of Pulau Sekudu. As seen from the GIS map done and shared by Dr Raju, most of this part of the island is 'higher' and thus more often exposed at low tide. Thus, as expected, there isn't too many 'exciting' finds here. But it is still very much alive. 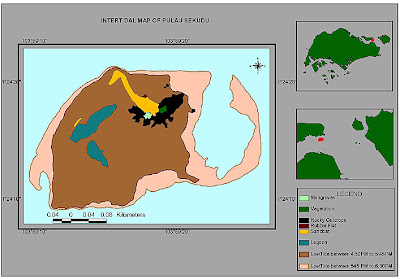 There are some rubbly parts here with many Haddon's carpet anemones (Stichodactyla haddoni) and some sponges as well as many crabs and shrimp. But it wasn't as 'exciting' as the eastern edge that I explored last month. There were also many Swimming anemones (Boloceroides mcmurrichi), the rubbly area was carpeted with Posy anemones. 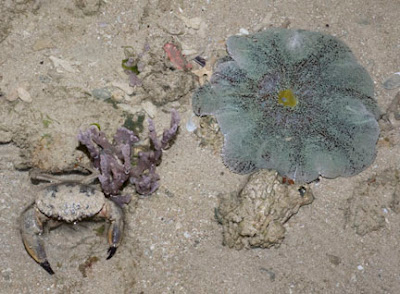 There are some clumps of colourful sponges here, some look like a child's crayon drawings! 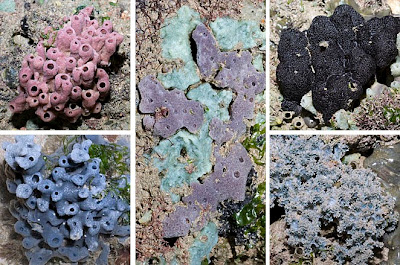 I saw this very spiky sponge. I'm not sure what is going on. 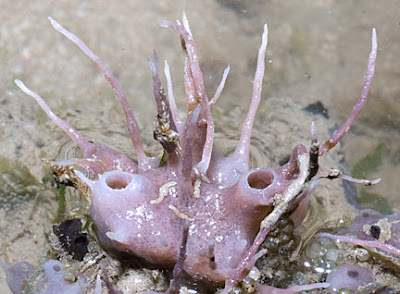 Some interesting sightings I saw today include this small Noble volute (Cymbiola nobilis) riding on the back side of a large one. Is it a smaller male waiting to mate with a female? These snails eat other snails, so it makes sense for the male to stay as far away as possible from the business end of a female. I've seen this too with Bailer volutes (Melo melo), also carnivorous snails that eat other snails. 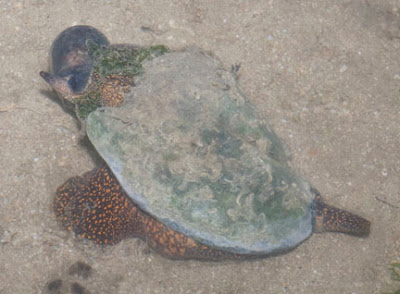 I saw many flowery sea pens (Family Veretillidae) here. I didn't notice the tiny shrimps among the flowery tentacles of the Flowery sea pen until I processed the photo. They blend in perfectly with the sea pen and only their little beady eyes give them away. 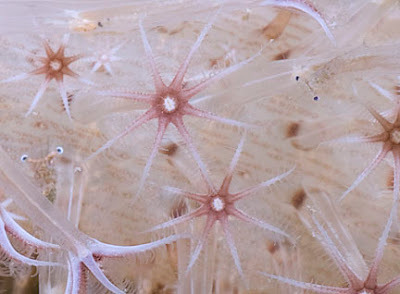 I also saw many Spiky sea pens (Pteroides sp.). Like other sea pens, it is a colonial animal made up of tiny polyps each with eight branched tentacles. The polyps are held on 'leaves' on another kind of polyp that forms the central 'stalk'. 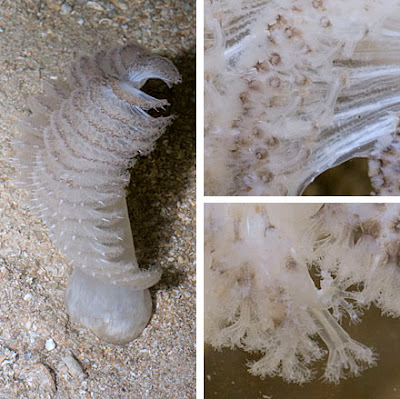 I saw lots and lots of Stone crabs (Myomenippe hardwickii). Many of them were mums carrying orange eggs in a flap under their bellies, like this mum with only one pincer. There were also many Swimming crabs (Family Portunidae) of different kinds. 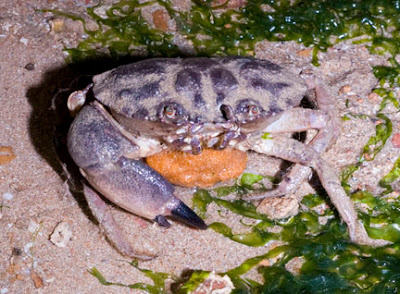 The most common hermit crab I saw today were these cute little ones with banded legs. 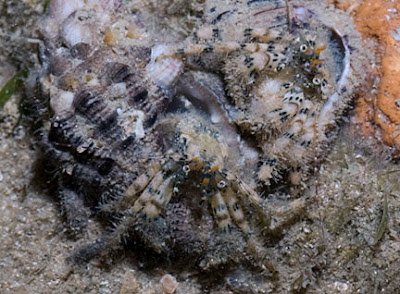 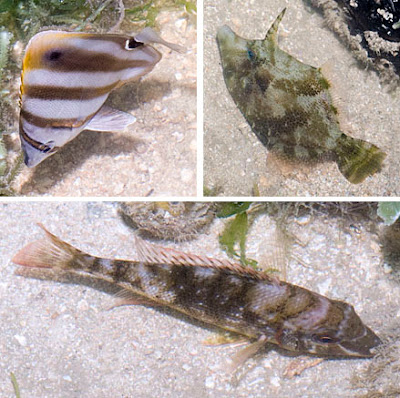 I saw one small colony of Spiky flowery soft coral and totally missed the False cowrie that lives on (and eats) the soft coral, until I processed the photo. I only saw one Crown sea star (Asterina coronata) and a few Biscuit stars (Goniodiscaster scaber), but there are still lots of White sea urchins (Salmacis sp.). As Marcus observed, there are now a lot more Plain sand stars (Astropecten sp.) because much of Sekudu has become bare sandy areas. In fact, Kok Sheng found a cluster of many Common sea stars (Archaster typicus).

Hurray! Kok Sheng spotted the patch of Serrated ribbon seagrass (Cymodocea serrulata) that I saw on in 2011. The patch looks to be about 5m x 5m, it's hard to tell in the dark. I also noticed some furrows that looks like dugong feeding trails. 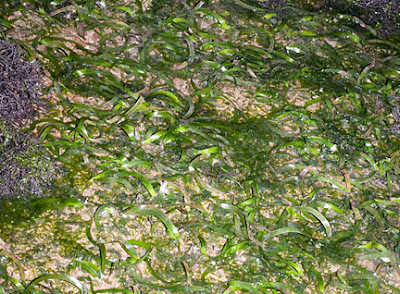 Kok Sheng found this strange nudibranch that I've not seen before. I'm sure Chay Hoon will know instantly what it is. 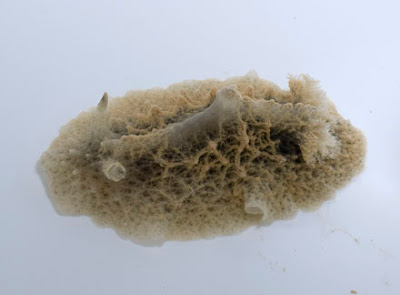 Pulau Sekudu is off limits since 2007 and requires special permission from NParks. Thanks to NParks for permission and support to do these predawn low spring tide surveys of Pulau Sekudu. Our last survey was in Jul 2013. Thanks to Alan at NParks for permission to visit and to Chay Hoon for organising the trip! And for the rest of the volunteers for helping to thoroughly survey this small but very rich island. More about why I think it's important to regularly survey Pulau Sekudu and Chek Jawa.