Lots of dead fishes at Lim Chu Kang mangroves. I could smell them long before I saw them. And lots of questions came to my mind as I checked out the situation. 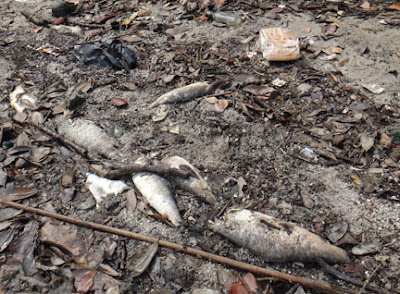 Thanks to the alert by Andy Dinesh who shared about the dead fishes he has been seeing since 29 Jun (Sat) at Lim Chu Kang and Sungei Buloh Wetland Reserve.


There are lots of fish farms opposite Lim Chu Kang mangroves and near Sungei Buloh Wetland Reserves. The farms are the little dots in the water in this Google Earth snapshot. 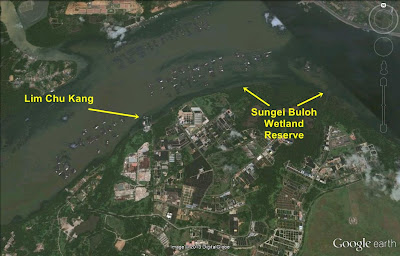 Here's a view of the fish farms on the horizon from the mangroves at Lim Chu Kang. 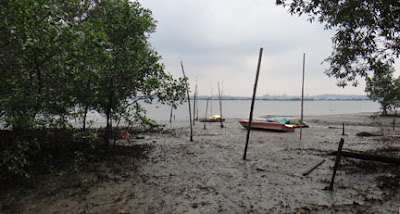 The dead fishes were scattered all along the tide line starting from the jetty. 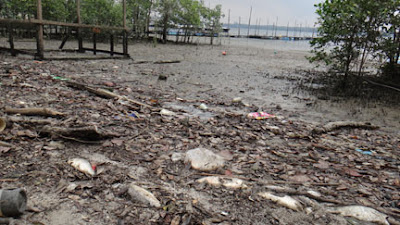 The dead fishes look like those raised by fish farms. What killed these fishes? Were these dead fishes deliberately dumped by the fish farms instead of being properly disposed? 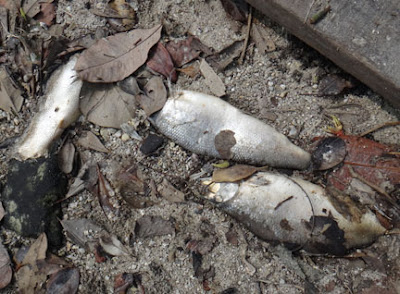 Most of the fishes were decomposing. Aren't the fish farms worried that such large quantities of dead fish might compromise the water quality and thus the quality of the fish that they raise for Singaporeans to buy and eat? 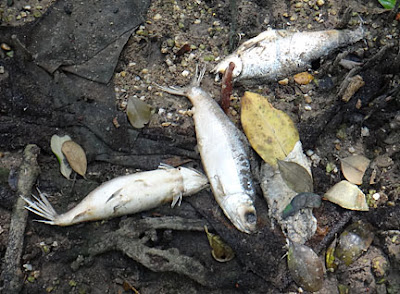 But some of the fishes looked somewhat freshly dead. 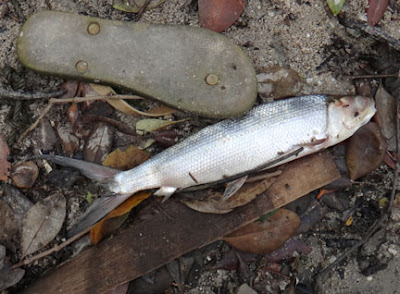 Another somewhat freshly dead fish. Are the farms still dumping dead fishes since Saturday, four days ago? When will the dumping stop? 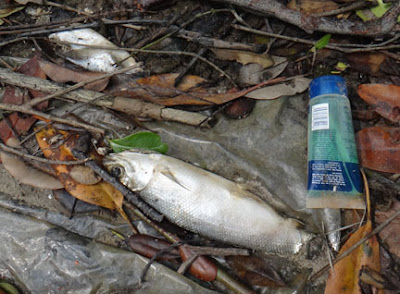 There is a path through the mangrove, probably made by fishermen. Dead fishes litter even the area inside the mangroves. 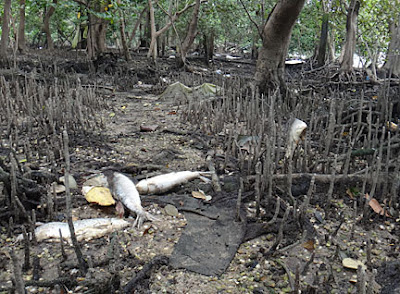 Besides fishes, it looks like some mussels were also dumped on the shore. The only positive aspect of this is that I didn't see large numbers of natural fishes (i.e., NOT fish farm fishes) also dying or dead on the shore. As I did during the Pasir Ris mass fish death incident in Dec 2009. So hopefully, whatever killed the fish farm fishes have yet to affect the natural fishes? 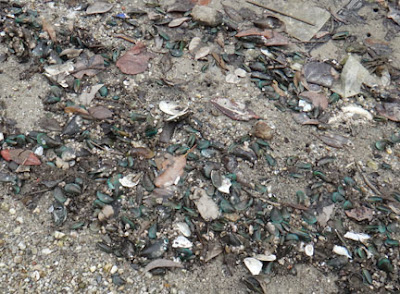 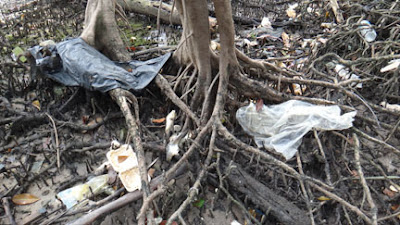 Labels on many bags suggest they contained rice or ice. Were these bags dumped by the fish farms too? 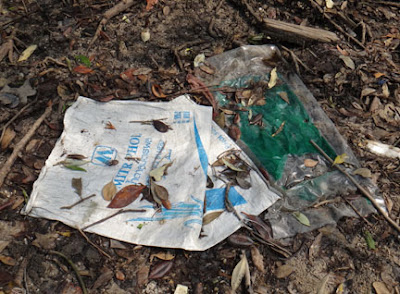 There's lots of styrofoam boxes strewn in the mangroves including up the trees! Also from the fish farms? 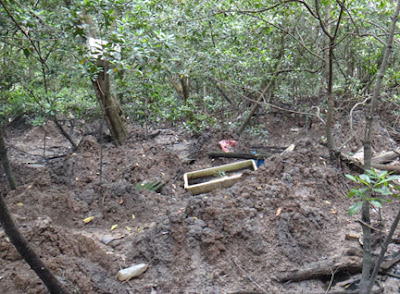 There is a ricketty jetty at the end of Lim Chu Kang Road that I think is mainly used by the fish farmers. At low tide, pick up trucks drive right onto the shore for transfer of stuff to the fish farms. 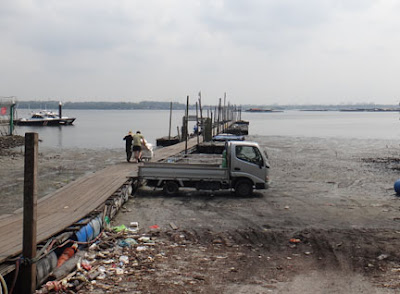 Here's a closer look at the gunny sacks used to contain stuff brought over to the fish farms. Such gunny sacks are commonly seen washed up on the shore near fish farms. 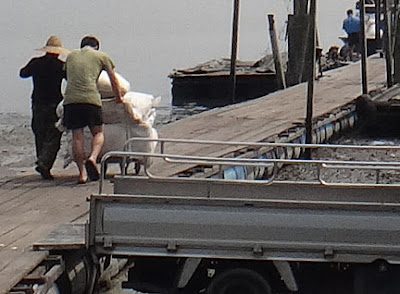 There is a large container for rubbish at the end of Lim Chu Kang Road infront of the jetty. The container is full to the brim. Why don't fish farms use their trash disposal system to get rid of dead fishes instead of dumping these into the sea. Or do fish farms dump because they don't have an adequate trash disposal system?! There are quite a lot of questions raised by this incident. 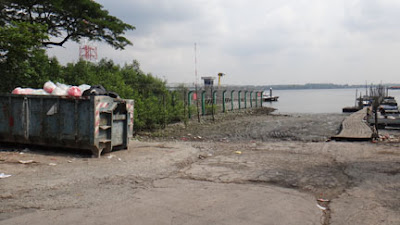 I stopped by at Kranji to see if there were any dead fishes washed up there. I didn't see or smell any. The fish farms (blue arrow) are quite far from this shore. The dark forested area on the horizon is Sungei Buloh Wetland Reserve. 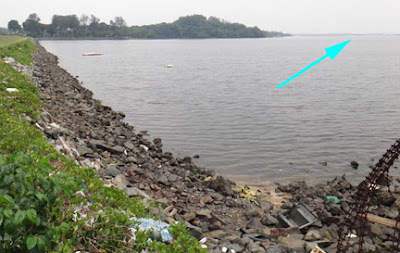 This is not the first time that mass fish deaths happened at Singapore's fish farms. One would think there would be a better response in place by now to ensure dead fishes are not dumped into the sea.

In Dec 2009, there were reports that more than a thousand fishes had washed up at Pasir Ris. Later it was reported that the 50 fish farms around Pulau Ubin had lost fish stocks, with some losing as much as 60% of their stocks. The Agri-Food and Veterinary Authority (AVA)'s explanation for this: "A plankton bloom, which occurs when one species of these drifting marine organisms predominates over others and multiplies quickly. The rapid increase in the number of these organisms drains the sea water of oxygen and deprives fish and other animals of it. The current bloom was triggered by fickle weather, higher concentrations of nutrients in the sea water and poor water exchange between the high and low tides."

I'm trying to find out more about what is going on with the dead fishes at Lim Chu Kang. If you have any questions that you think we should raise, please do share them with me so I can consolidate all the issues and try to find some answers.