The prettiest Giant clam I've seen so far! A good find as Mei Lin aka Giant Clam girl and Kareen were on the trip to keep a look out for these Fluted giant clams (Tridacna squamosa). 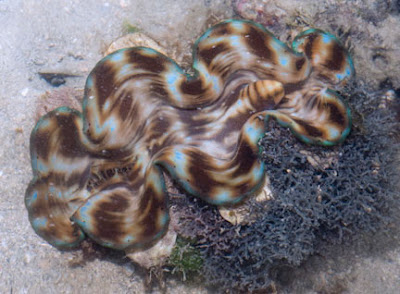 Sadly, we also saw signs of bleaching on this tiny submerged reef.

Today we return to Terumbu Hantu which we first visited in Apr 2012. We also hopped over to the tiny submerged reef marked with an orange * which is one of the two unnamed reefs marked as Terumbu Pempang Kecil on the navigation maps. 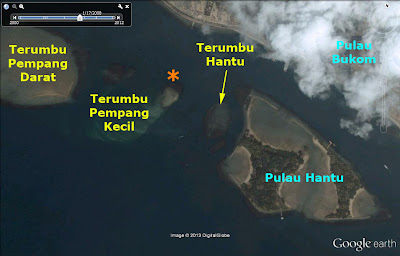 It was a lovely sunny haze free day on Terumbu Hantu, an interesting small submerged reef. 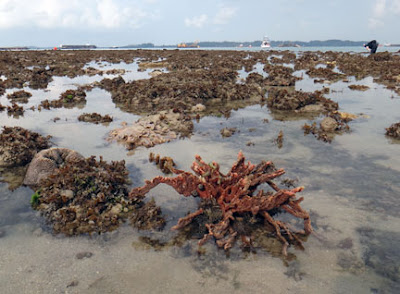 In some parts of Terumbu Hantu, the animals were growing close to one another. But surprisingly, this submerged reef is not as densely covered with marine life as the portion of Pulau Hantu near it. 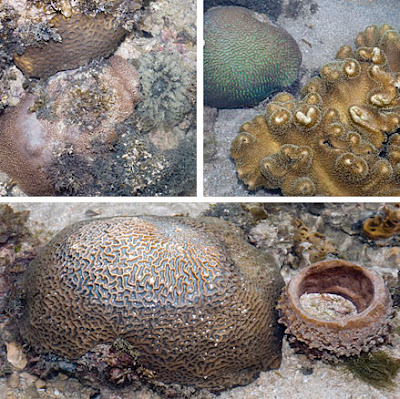 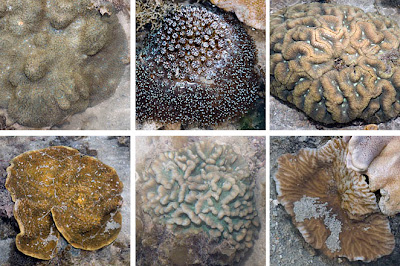 A special anemone on this reef is Merten's carpet anemone (Stichodactyla mertensii) which I don't see often. Kok Sheng found two of them! There were also many many more Giant sea anemones (Stichodactyla gigantea). I saw signs of clown anemonefishes in most of them but failed to get a photo of any of them. 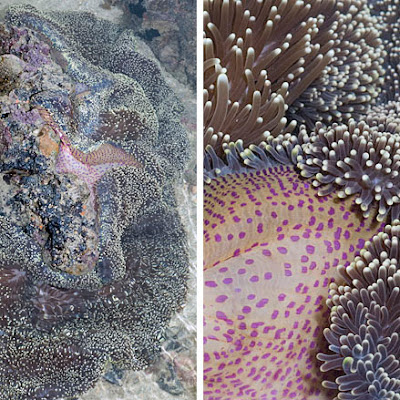 It was distressing to see many bleaching hard and soft corals on this trip. Sadly, my experience during the 2010 global mass bleaching event taught me how to identify bleaching. 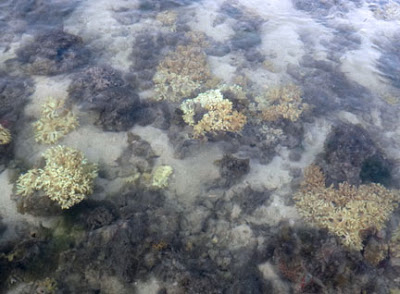 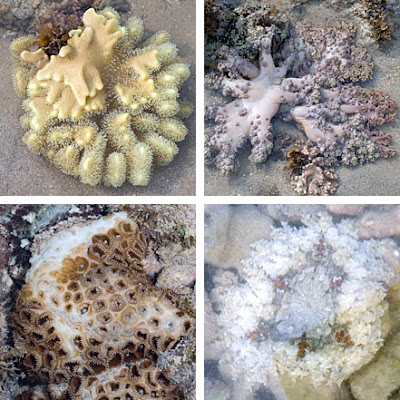 These Circular mushroom corals (Fungia sp.) were all bleaching. 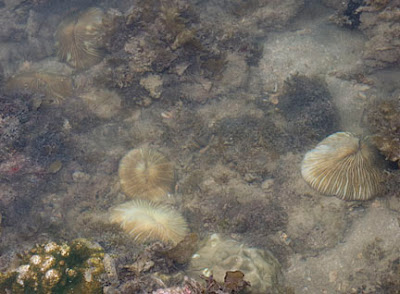 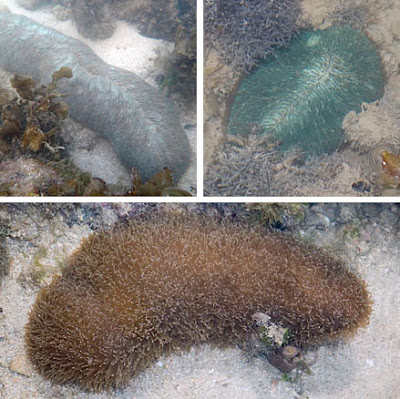 I saw some colonies of Favid corals (Family Faviidae) with bleached parts. Most were small colonies (under 15cm). The only bleached colony I saw was a small Ring plate coral (Pachyseris speciosa). 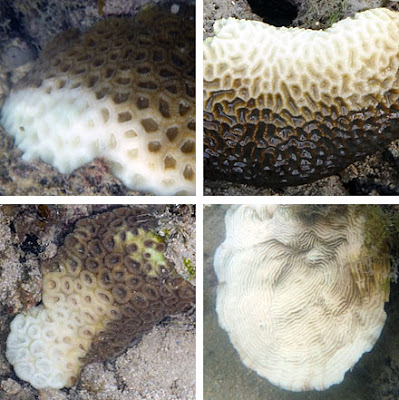 I saw only one Anchor corals (Family Euphyllidae) and it was bleaching. The Crinkled sandpaper coral (Psammocora sp.) I saw either had bleaching patches or were rather pale or yellowish. These two kinds of corals were among the first to bleach during the 2010 global mass bleaching event.

Some of the Anemone corals (Goniopora sp.) were yellowish, but most were the normal purplish or brown colour.

All the Flowery disk corals (Turbinaria peltata) I saw were small and were yellowish or pale.

Cauliflower coral (Pocillopora sp.) were among the first to bleach during the 2010 global mass bleaching event and many didn't recover. In this colony, only a small portion is still alive, and fortunately remains unbleached. In the dead part, there were little white egg capsules of squids inserted among the branches! I didn't see any bleaching Cauliflower corals on this trip. 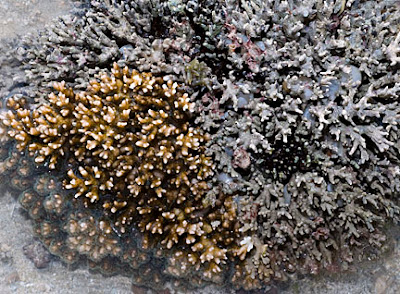 There were scattered clumps of Tape seagrass (Enhalus acoroides) on this rocky reef. Most of them had long leaf blades. 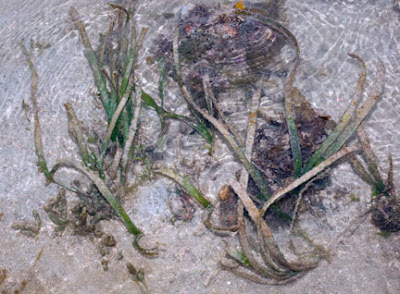 As the tide turned to submerge Terumbu Hantu, the sandy little reef at Terumbu Pempang Kecil was still above water. So we decided to stop by for a quick look around. 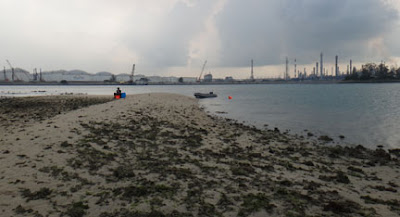 There was a scattering of hard corals on this mainly rocky reef with a sandy centre. 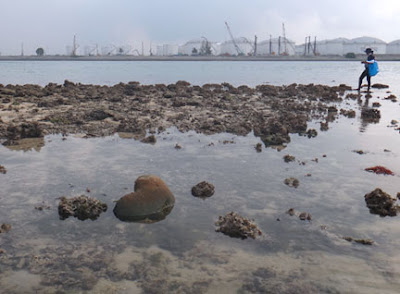 Mei Lin pointed out the Spoon seagrasses (Halophila ovalis) that sprinkled much of the sandy parts of the rocky shore. 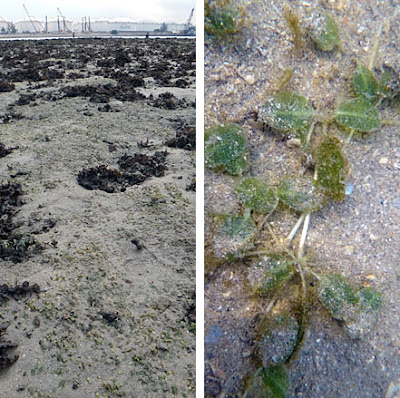 Since we probably won't go back to Terumbu Pempang Kecil too soon, we take some samples of seagrasses to press and keep at the herbarium for record. 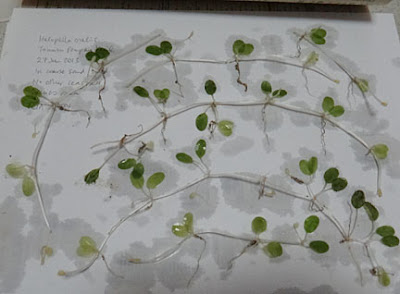 Mei Lin found two heart cockles (Corculum cardissa). A closer look suggests they might be two different kinds? One is prettier with rounded bumps on the outer edges. 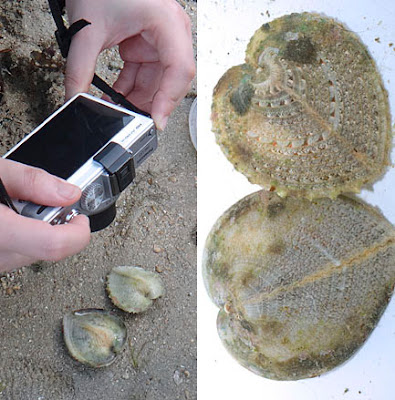 Chay Hoon found an abalone! This small snail has large eyes and a pair of tentacles, as well as a fringe of shorter tentacles at the base of its large foot. 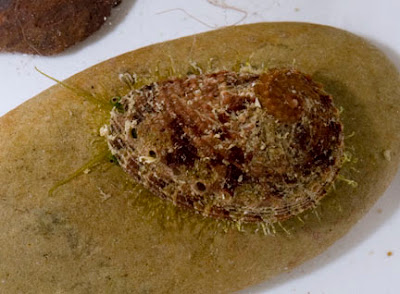 Among the other interesting animals seen during the short trip were a baby Spider conch (Lambis lambis) which Kok Sheng found. The Red eyed reef crab (Eriphia ferox), an Ovum cowrie (Cypraea ovum) and the Marine spider (Desis martensi) which is a true spider that shelters in an air bubble when the reef is submerged! 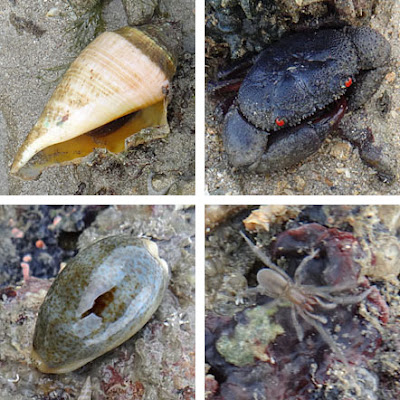 On the way to the reef, as usual, we observed a huge cloud of emissions hanging over Pulau Bukom. 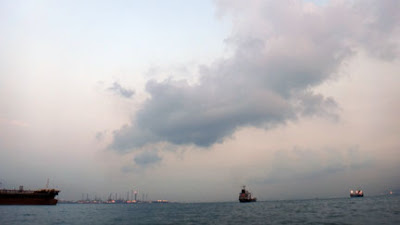 There's another cloud over Jurong Island. 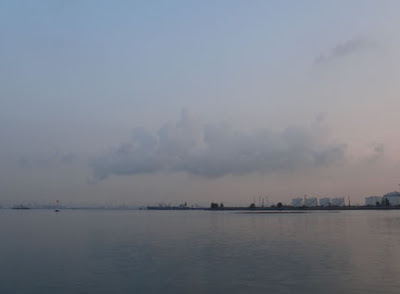 We arrive too early at Terumbu Hantu and the tide is still high, but this didn't stop us from landing. These reefs and Pulau Hantu (the area with the trees) lies just next to the petrochemical plants on Pulau Bukom. 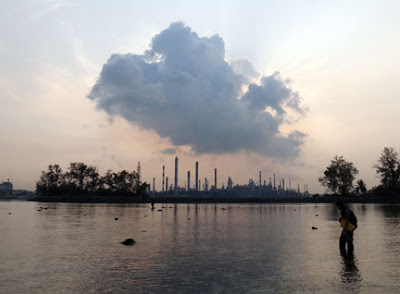 Opposite Terumbu Hantu, there are lots of storage tanks and piling was furiously going on there. 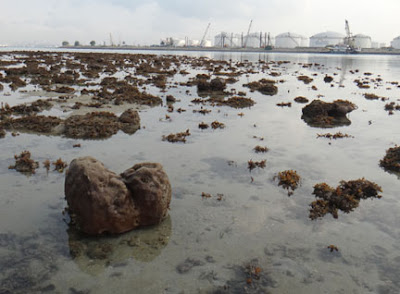 I usually check with the NOAA’s Coral Reef Watch which gives predictions of global coral bleaching. Today's mapping shows the area in Singapore's vicinity is under watch for bleaching (green). 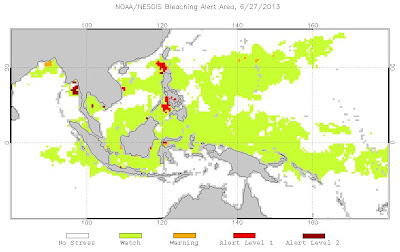 We did notice some corals bleaching at Pulau Hantu in May 2013. But I didn't notice much bleaching elsewhere during the Southern Expedition last month. Is this happening just at Terumbu Hantu, or everywhere else? Not enough low tides, too many shores to check up on!

UPDATE On 29 Jun 2013, Karenne Tun shared on facebook that: "Sea surface temperatures in the region are edging up to uncomfortable levels. Although not at the point of trigging mass bleaching, initial signs of thermal stress have been observed on Singapore reefs.

Last Wed (19/6), some initial signs of coral bleaching was observed at Kusu Island N. Nothing major at that point in time, just paler coloured corals affecting around 10-20% of the reef community.

One week later on Thu 27/6, signs of intensified bleaching was observed at Pulau Hantu, where an estimated 30% of the reef community showing signs of partial bleaching.

Again, at this point, no wide spread bleaching was observed. The NOAA Coral Bleaching alert have put most the region at Bleaching Watch, and this has been confirmed by local SST monitoring. A check with colleagues in the region indicate that some initial bleaching have been observed in Malaysia and Philippines.

This is a call out to all divers and concerned individuals to keep an eye out for our corals. Please post sightings and photos if you have them."