Lush meadows of seagrasses suprised us at East Coast Park! 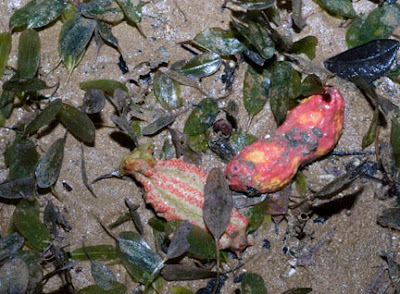 
The shore had lots of lush fresh healthy looking Spoon seagrass (Halophila ovalis). As well as Needle seagrass. Among the seagrasses were little animals like this small Flower crab. 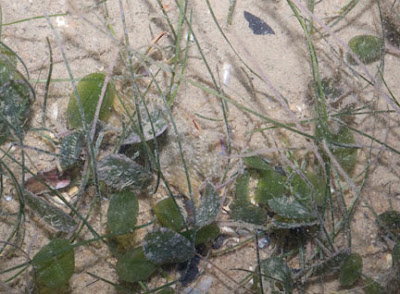 There were some patches of only skinny Needle seagrass (Halodule sp.). 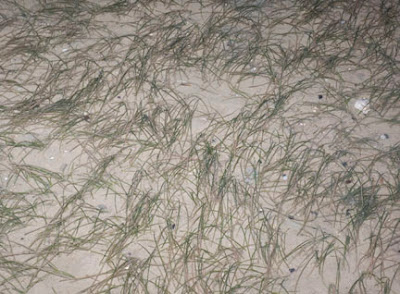 I got a bit too excited seeing the broader seagrass. But a closer look revealed they were just broader Needle seagrass! 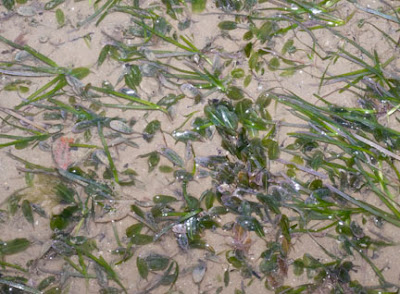 We saw many MANY large  Eight-armed sea star (Luidia maculata) which had only six arms. There are two in this photo, it's hard to spot them when they are covered in sand. Kok Sheng found only one with 8 arms. 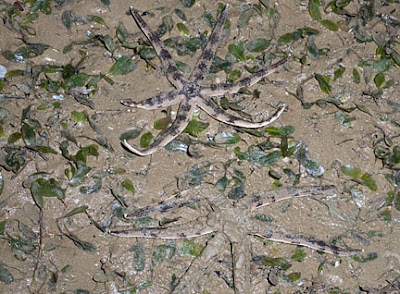 There were lots of Striped hermit crabs (Clibinarius infraspinatus) among the seagrasses. 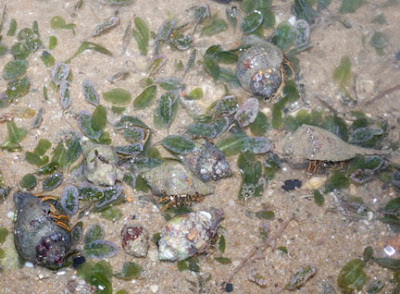 There were many Haddon's carpet anemones (Stichodactyla haddoni) on the shore. I saw two with Anemone shrimps (Periclimenes brevicarpalis), and one had a brittle star on it.

I saw two small clumps of sea fans in the lagoon. They had the usual kinds of animals that live in sea fans: Tiny colourful brittle stars (Ophiothela danae) and various ovulid snails (Family Ovulidae). 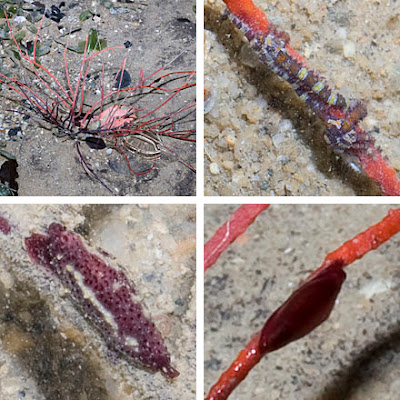 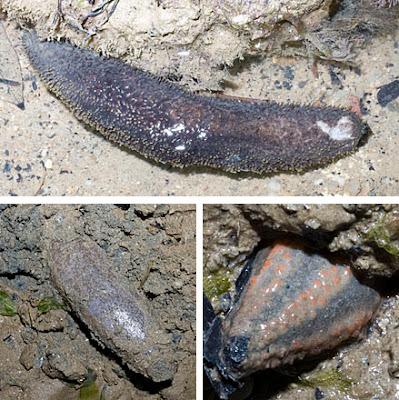 Kok Sheng found two Fig snails (Ficus variegata)! This shore reminds me of another shore on the East Coast that also had Fig snails and other awesome marine life. That shore has since been lost in 2008 to coastal works. 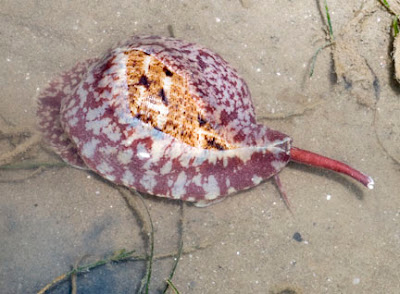 I don't often see these Egg-white moon snails (Polinices albumen). They are common on shores like Cyrene Reef. So it was nice to see them at East Coast Park! 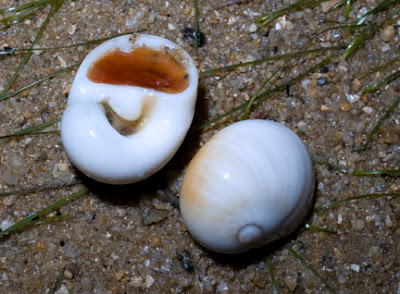 There were also signs of other kinds of special snails: Javan turid snail (Turricula javana) and Grey bonnet snail (Phalium glaucum). Not alive though.

I came across three sand divers (Family Trichonotidae) on the sandbar. They were still alive and I helped them back into the water. I have observed this so far only on Cyrene Reef. 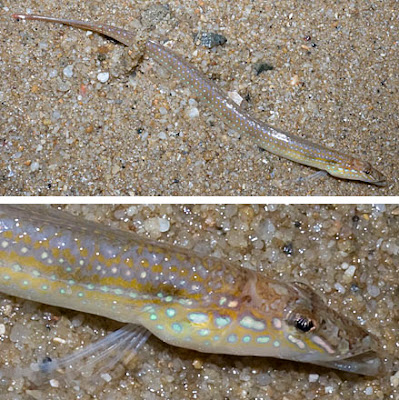 We saw a pair of Coastal horsehoe crabs (Tachypleus gigas) on the high shore. Were they laying eggs? They were upside down and struggling when we saw them. So we turned them over and later brought them down to the water as the female seemed to be struggling to go there. Strangely, we saw a pair of horseshoe crabs in a similar situation at East Coast Park in 2009 too. 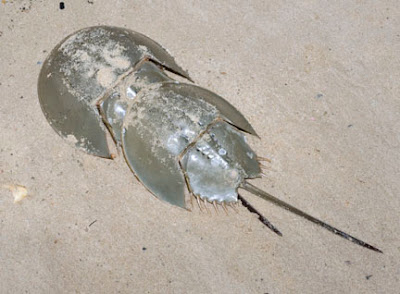 In an abandoned tyre, there was a writhing mass of brittle stars! 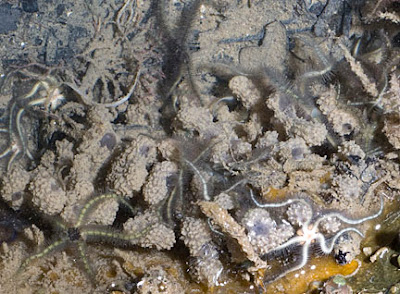 Another way to gauge the richness of a shore is to see what lives under a stone. And wow, there were a lot of interesting animals under some of the rocks. Sadly, the tide turned and we couldn't really explore the shore thoroughly. 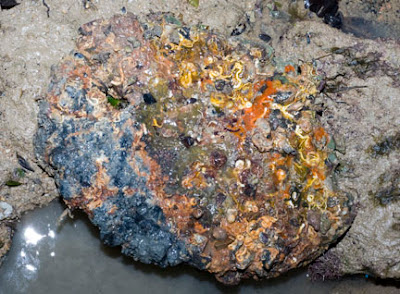 It's amazing how these seagrass meadows can settle so quickly. With masses of ships parked on the horizon. 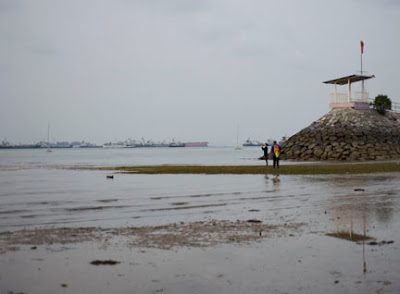 The seagrass meadows were thick in front of a pontoon leading off a seawall. There were some furrows in the meadows but I think they are not dugong feeding trails. They are too straight and probably made by something being dragged along the meadows. 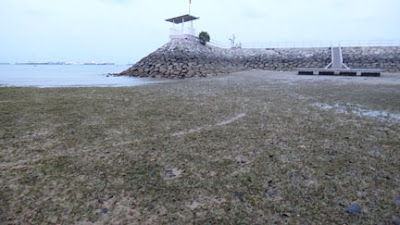 There were patches of seagrasses all over the shallow lagoon. 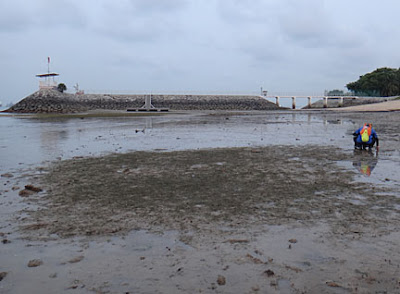 Unfortunately, there's signs of oil slick on the shore. 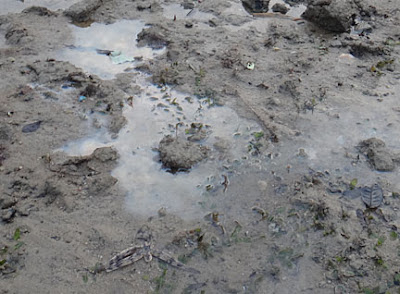 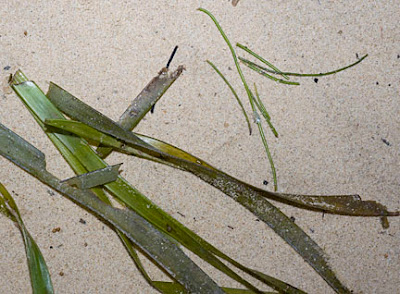 Pei Yan is quite impressed by the length of the Tape seagrass that has washed up. 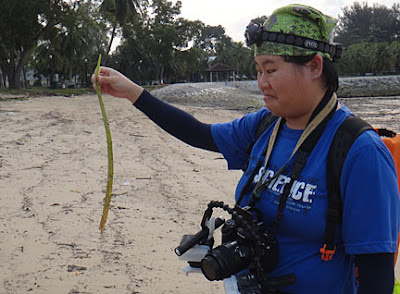 The last time I saw large areas of seagrasses in East Coast Park was in the Cable Ski Park lagoon in 2009. Our last trip here was in 2008 when the sandy lagoon had become very silty. It was a very nice surprise to see it doing so well now. Earlier today, we enjoyed exploring a reefy part of East Coast Park. Wouldn't it be marvellous if the artificial East Coast Park beaches could be constructed to encourage such natural marine regeneration?
Posted by Ria Tan at 10:52 PM