Learning about life in the deep sea

Dr. Bertrand Richer de Forges shared a glimpse of what lives in the deep sea. Using deep sea vessels of all kinds, Dr Bertrand has explored places thousands of meters from the surface! 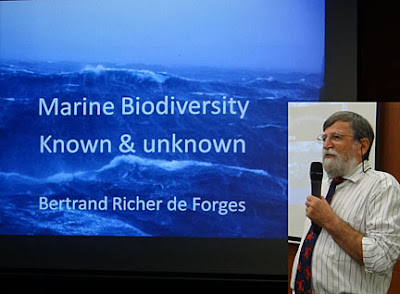 This is the second talk in the resurrected Wallace Lecture Series, originally a series of important lectures delivered in the 1960s by well-known biologists in the then University of Malaya. As Prof Peter Ng highlighted, Dr Bertrand is the probably the only speaker who looks like Wallace! Here's some highlights of Dr Bertrand's talk.


The deep see is deep indeed, hundreds of metres deep. And life is not uniformly distributed. More life is found where there is more nutrients. As life adapts to the pressure and cold, they sure look strange to us! 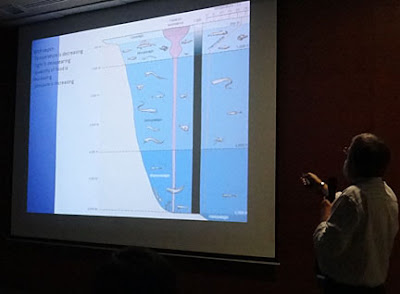 Dr Bertrand explains some of the various kinds of terrain and food sources that can be found in the deep sea. Sea mounts are tall bits that stick out above the deep sea floor and are a kind of oasis for marine life. Dead whales are a bonanza of nutrients attracting all kinds of marine life. 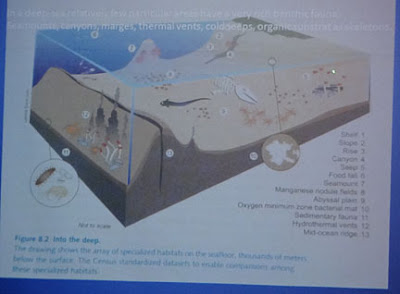 Dr Bertrand also shared some of the expeditions he organises to find out what live in the deep sea. These include dredge surveys, which look familiar to those of us who joined Dr Bertrand's surveys of Singapore's very own 'deep' sea near Pulau Ubin earlier this year. 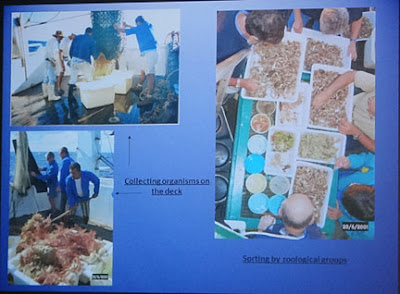 There is a surreal beauty in the marine life that can be found in the deep sea. They are colourful too! 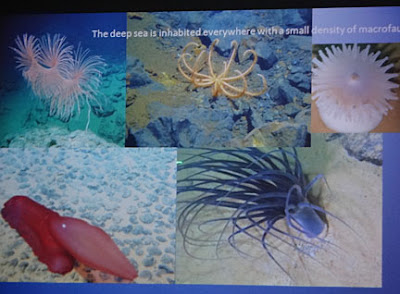 Some deep sea life have become famous even in popular culture. Dr Bertrand highlighted how he noticed that 'Mr. Blobby' was featured in the movie Men in Black III! 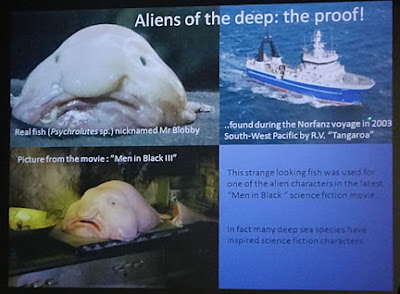 Dr Bertrand also explored the deep sea with submersible vessels like the famous Alvin. In this way, it is possible to see the marine life as they live their lives. But it was difficult to collect them. 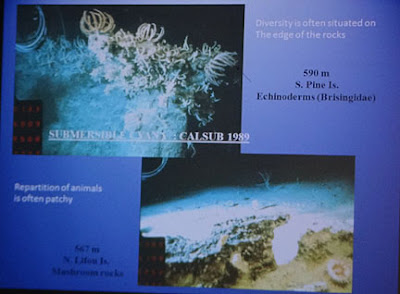 Another interesting habitat in the deep sea are places where chemicals seep out onto the sea bed. These can be hot or cold. Here, microbes have adapted to make food without sunlight, breaking down these chemicals instead. 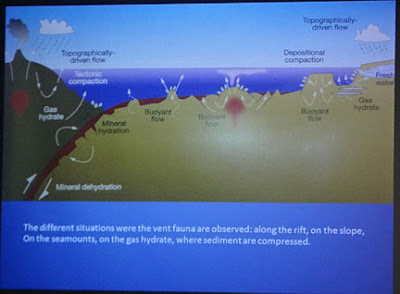 All kinds of animals can be found in symbiosis with the microbes which form the base of a fascinating food chain. Giant worms, strange barnacles, sponges, shrimps, crabs and lots more! 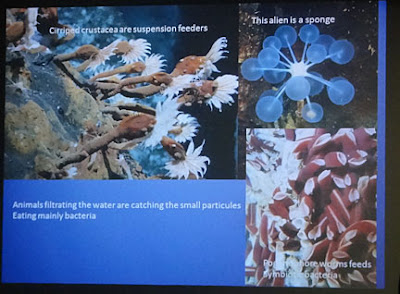 Dr Bertrand has also studied the deep sea in Antarctica! Wow. Here, it is very cold, but the seas are full of life. 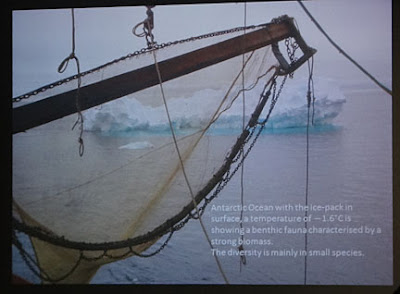 There are all kinds of colourful animals living here. 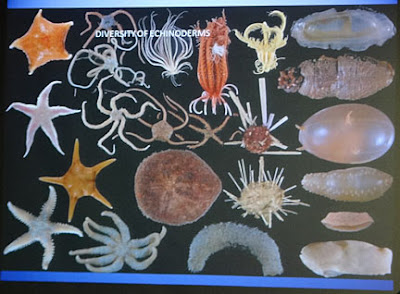 Dr Bertrand also surveys the tropical seas. We are close to the Coral Triangle, which has the richest diversity of corals in the world. 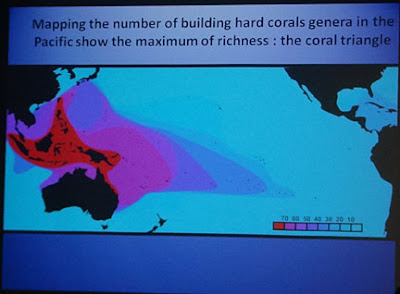 In his surveys of the deep sea, Dr Bertrand found that deep sea corals are also richest in the Coral Triangle. 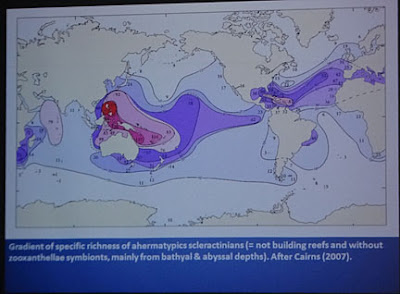 Many animals in the deep sea live in symbiosis. This pair of shrimps is often found living inside this particular sponge. Dr Bertrand also highlights that most of the diversity in marine life is in small animals. Most of the variety is in animals that are much much smaller. 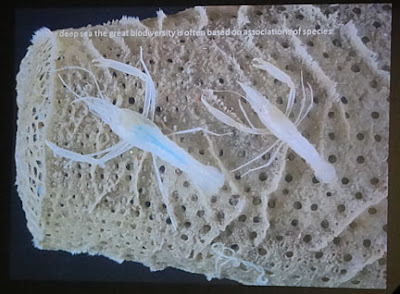 Among the facts Dr Bertrand highlighted that I found fascinating, was that deep sea marine life can be very very old. Because conditions are so harsh down there, many animals grow very slowly, some only millimetres per decade. So some humble looking animals can be hundreds of years old. 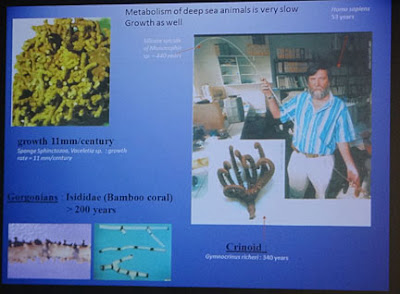 In fact, Dr Bertrand had found some so-called living fossils. Animals that had previously only been seen as fossils, without any living specimens. The discovery of such animals helps scientists sort out the 'tree of life' so we can understand more about biodiversity elsewhere. Scientists also find all kinds of interesting substances in deep sea animals, including one that might be effective against dengue! 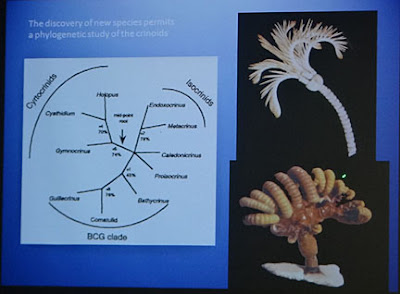 Sadly, one of the main threats to deep sea life are deep sea dredgers that drag enormous nets to catch fishes, which can be abundant near particularly rich parts of the deep sea. These nets cause massive damage to marine life that that hundreds of years to recover. 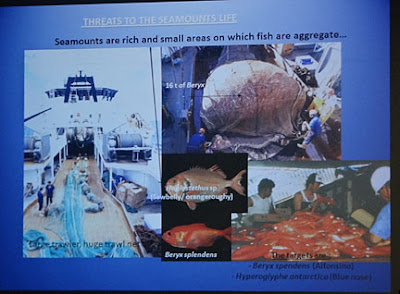 Dr Bertrand shows that most animals are rare. 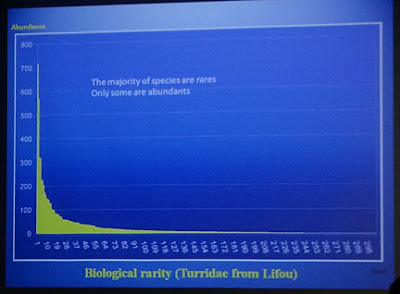 There are many huge gaps in what we know about deep sea marine life. So much more to learn and discover. 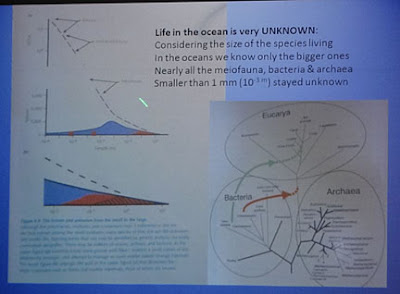 This is why I'm very excited about the upcoming Mega Marine Survey October Expedition. This intensive effort that brings together global and local scientists, as well as volunteers, hopes to discover more about what lives on Singapore shores. We are lucky to have Dr Bertrand leading the dredging work during the October Expedition!

So join the Mega Marine Survey to make a difference for our marine life!
Posted by Ria Tan at 1:06 PM