How nice to see a seahorse at Pulau Jong this morning. My first sighting of the Tiger-tailed seahorse (Hippocamus comes) here! 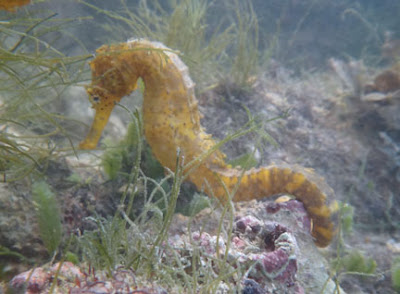 The rest of the team saw lots of slugs and many other interesting creatures too!

We arrived on this last untouched island in Singapore at sunrise. With the city skyline on the horizon. Pulau Jong is what our other recreational Southern Islands looked like before they were reclaimed and developed, e.g., Sisters Islands, Kusu Island, St John's Island, Lazaru Island and Pulau Hantu. 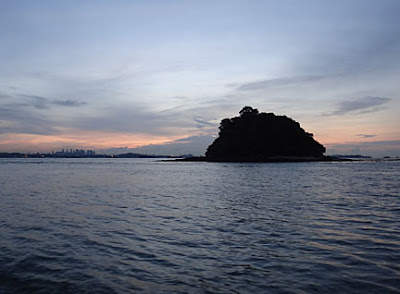 This tiny island has forest cloaked natural cliffs, surrounded by a large reef flat that only emerges at super low spring tides. It is quite close to the refineries on Pulau Bukom, as well as the Semakau Landfill. 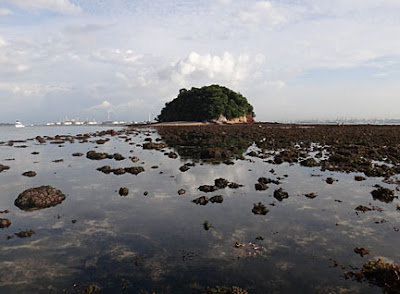 Pulau Jong also lies next to major shipping lanes and we see huge ships passing by as we explore this submerged reef. 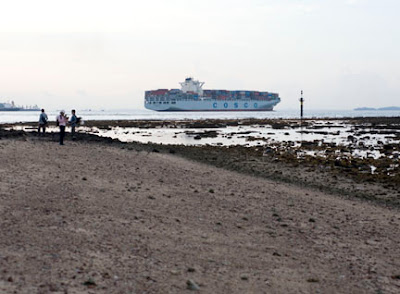 Our last trip here was in April which was rather quiet, with fewer hard and soft corals than before the mass bleaching in 2010. Today, I'm trying out the intertidal survey method along the 'spine' of Pulau Jong towards Pulau Sebarok, where major petrochemical stores are located. There are also plans to locate massive floating oil storage tanks here. These tanks will be the size of VLCCs (Very Large Crude Carriers). 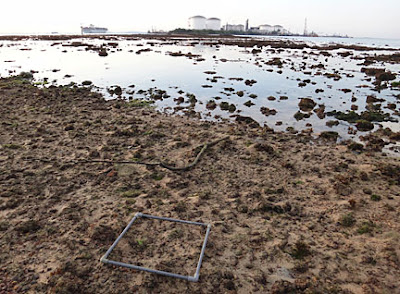 Doing the surveys really helps me to pay closer attention to what is on the shore. I only noticed the seahores because it was in my quadrat!

Here's what I saw during the survey.
There were a lot of Blue-spotted fantail rays (Taeniura lymma) in parts of the reef which remain submerged. Some of them like this one was quite large! It's important to step carefully on a reef survey, to avoid damaging marine life and avoid injury too. 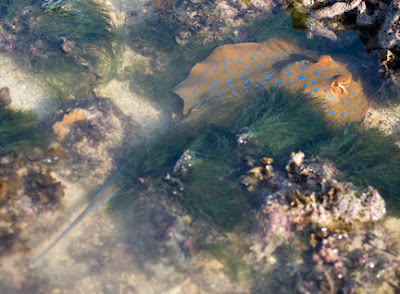 Even blind me could spot nudibranchs as they were quite abundant today. I saw several tiny pajama-striped Dermatobranchus sp., a small black spotted white Jorunna funebris and one Glossodoris atromarginata. Under a rock I found a Bornella sp. and another strange slug, but didn't get around to taking a photo of them. Fortunately, Kok Sheng took photos of them. Needless to say, everyone else found a lot more slugs. 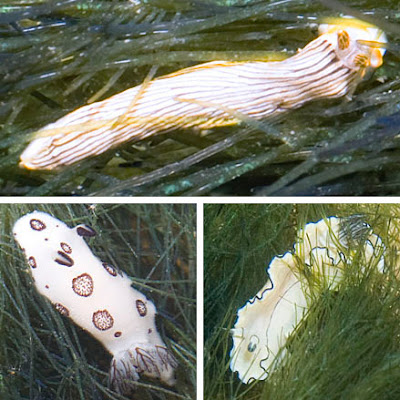 I notice the leathery soft corals (Family Alcyoniidae) here are much smaller than before the mass bleaching in 2010. Today, they seemed mostly alright, although some had fuzzy growths at the edges. 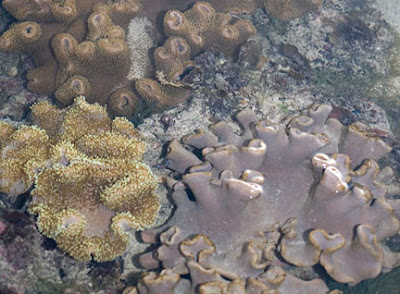 There were also several other kinds of leathery soft corals. Today I saw many colonies of Starry leathery corals. I also saw some Flowery soft corals (Family Nephtheidae) which looked alright.

Most of the corals I saw on this trip were Pore corals (Porites sp.). They all seemed fine, nice and brown, and I didn't see any bleaching. 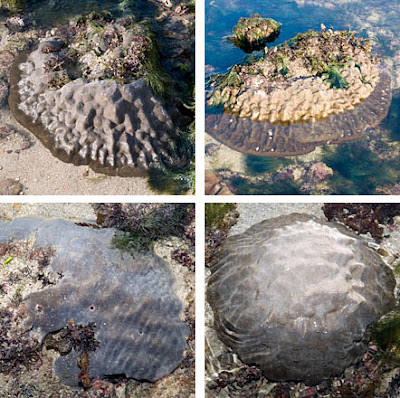 Some of the Pore corals had white marks which were probably made by fishes nibbling on them. 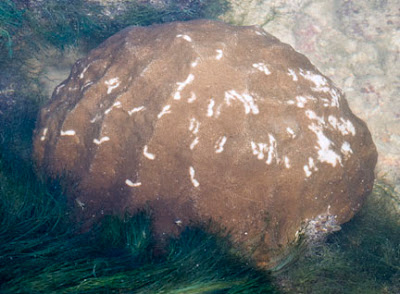 I also saw some, but not many, Favid corals (Family Faviidae). 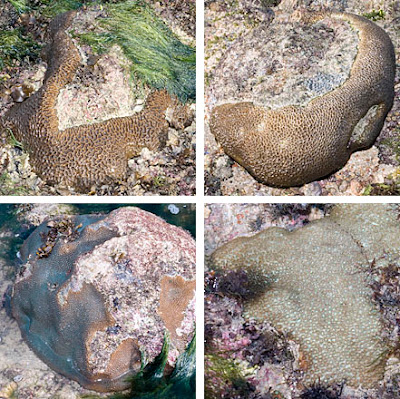 Among the other kinds of corals I saw was one Sandpaper coral (Psammocora sp.), a Pebble coral (Astreopora sp.), some Disk corals (Turbinaria sp.) and several Anemone corals (Goniopora sp.). All seemed alright. Kok Sheng and the rest saw a wider variety of hard corals. 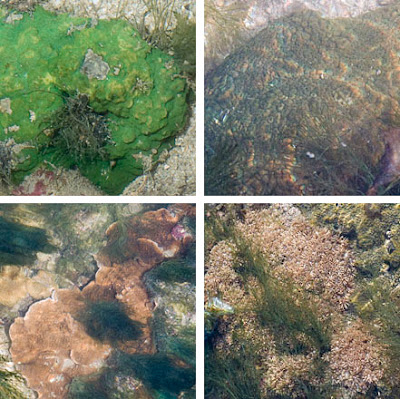 The only bleached thing I came across was this. I'm not sure what it is, possibly a sponge? 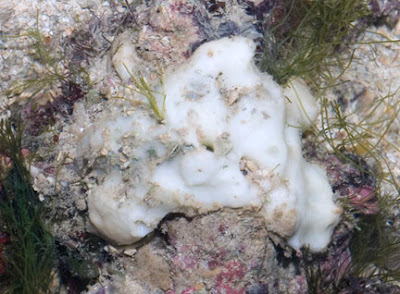 I also came across one recently dead coral. The dead skeleton has yet to be colonised by encrusting organisms. 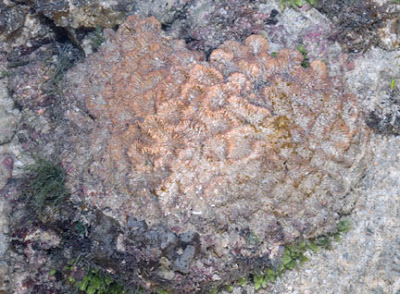 I also checked under rocks today and saw lots of snails, clams and little crabs. I saw what looks like the flatworm Maritigrella fuscopuntata, my first sighting of this in the South. Elsewhere, I saw many Blue-lined flatworms (Pseudoceros sp.). There were many Long black sea cucumbers (Holothuria leucospilota) too, and I saw two small sea cucumbers that might be the Little african sea cucumber (Afrocucumis africana).

Among the special plants found on the natural coastal forest here is the Delek air (Memecylon edule) which was blooming and fruiting! Joseph Lai came with us a while back and has shared a list of plants found on Pulau Jong. 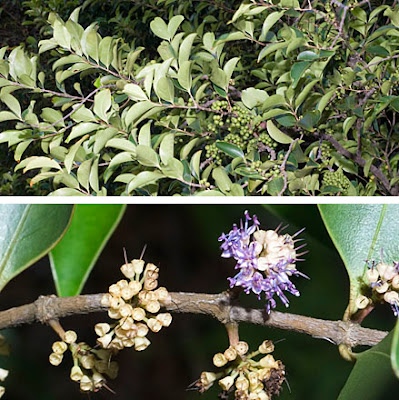 I checked up on the small patches of seagrasses found here. There are nice growths of Sickle seagrass (Thalassia hemprichii) and Spoon seagrass (Halophila ovalis). 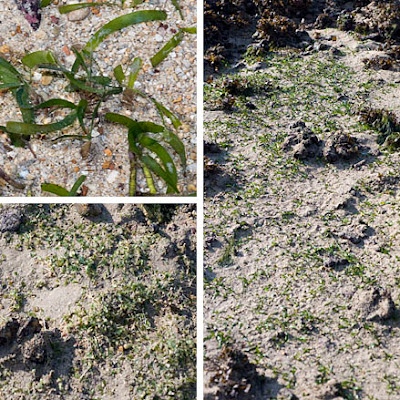 We came across two broken fish traps, but no new ones. On our last trip in April, we saw many of these traps. Kok Sheng checked on and found the other Fluted giant clam (Tridacna squamosa) on Pulau Jong is still alive. Hurray! We don't get to visit Pulau Jong very often and I hope it will stay well until our next trip.