Bivalves that trick fishes, carnivorous bivalves, bivalves that form reefs and other bizarre bivalves! I learnt so much during the Bivalve Workshop today. 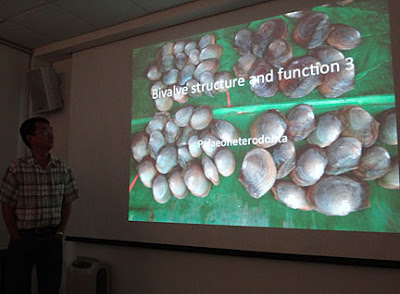 After the lectures, a few of the volunteers also decided to find out what bivalves ordinary people can see at the food court and supermarket.


Today is the last series of fascinating lectures by Dr Tan Koh Siang of the Tropical Marine Science Institute who is conducting the Workshop: Introduction to Tropical Bivalves. We were astonished by the amazing adaptations of some freshwater bivalves who trick fishes into coming close enough so the mama clam can 'bomb' the fish with its living larvae. These larvae need to latch onto fishes to avoid being swept away to the sea. Some of these larvae are also parasites, sucking on the blood of fish gills when the fish eats them. 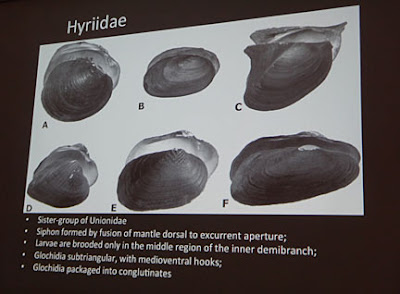 Just how do these immobile bivalves get a fish to 'carry' their babies? Like human fishermen, they present lures that mimic the favourite prey of predatory fishes which get into trouble when they bite the lure. Here's an excellent video clip of how this works.
Dr Tan also shared this video clip of a freshwater mussel producing a superconglutinate, or a cluster of clam babies held on a mucus strip. This wiggles in the stream current and resembles a yummy little fish. When a predatory fish eats the lure, the clam babies get into the fish's gills. Eeks.
And here's another kind of tiny 'Sulphide-mining' bivalve that has a super long foot used to 'suck up' sulphides to feed the sulphur reducing bacteria in their bodies. It reminds me of plant roots. 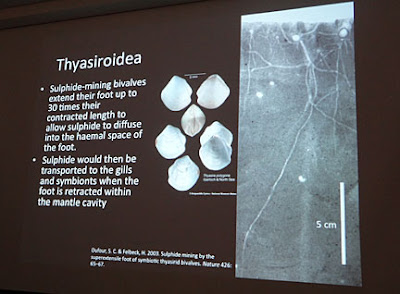 I learn fascinating facts even about familiar bivalves like the Heart cockle (Corculum cardissa). This pretty bivalve harbours symbiotic zooxanthellae that can produce food from sunlight. 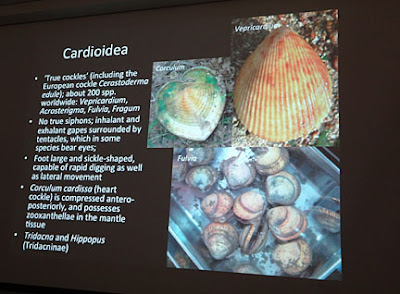 I remember Tan Siong Kiat of the Raffles Museum of Biodiversity Research telling me this too, and explaining that is why these clams have tiny 'windows' in their shells! To allow light to enter the animal and the zooxanthellae in the body.

I also learnt that in many ways, Giant clams are now considered giant cockles! Giant clams also have zooxanthellae and the body is modified to greatly expand the area exposed to the sun. 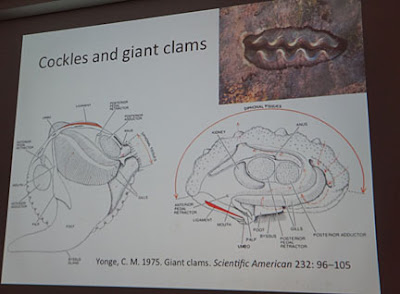 There are even bivalves that act more like snails. We have encountered these lively little Scintilla clams (Family Galeommatidae) on our shores. They have a long foot, lots of tentacles and can hop and creep about quite actively. There are also clams that can 'surf' the waves, riding an incoming wave to get to the high shore, and an outgoing wave to get back to deeper water. We sometimes see these Donax clams (Family Donacidae) on our shores too. 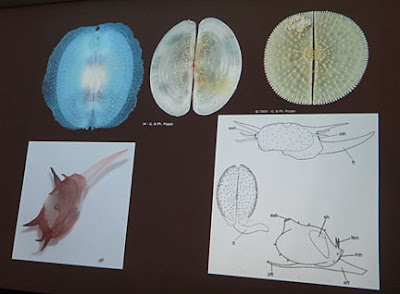 Venus clams (Family Veneridae) come in a bewildering variety of patterns and colours. We need to look carefully to tell them apart! 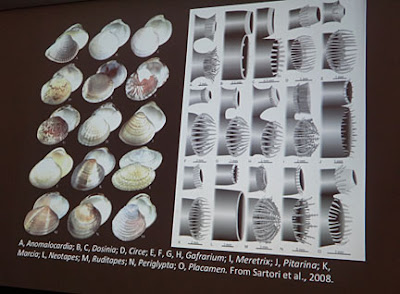 Among the most bizarre clams are those that burrow into dead wood. Some have beautiful shells in the shape of angel wings. Others look like worms and use their valves like teeth to chew their way through the wood, lining the burrow with shelly material. 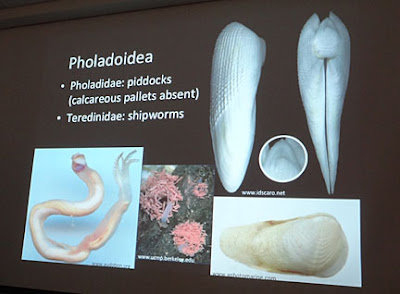 Some of these wood-chomping bivalves squirt out bioluminescent stuff that produces a 'blinding' bluish light. The purpose of this is still not known. 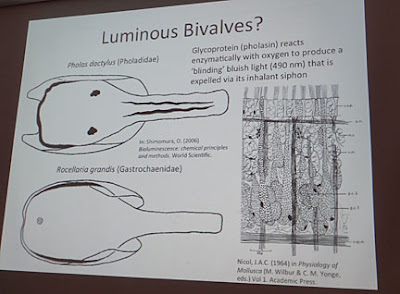 Then there are curious clams that produce an 'igloo' of tough thick shell that enclose a delicate pair of valves. These clams burrow into calcareous rock or shells. I must look out for these animals that hardly even look like a bivalve! 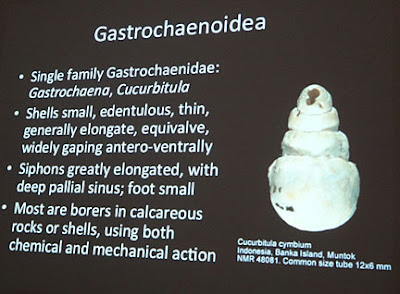 We are quite familiar with these odd looking bivalves also called the Watering pot shell (Verpa penis) because of the perforated cap on the bottom of the shell. The only sign of its 'bivalviness' is a tiny pair of valves embedded on the tubular shell. I learnt today that these are the remains of the larval shell. 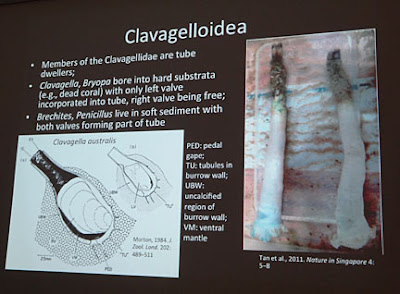 A mind boggling bivalve is this one that carnivorous! It uses sticky tentacles to trap and eat animals. Fortunately, it lives in the deep deep sea, is tiny and doesn't eat people. It feeds on copepods and other tiny animals. 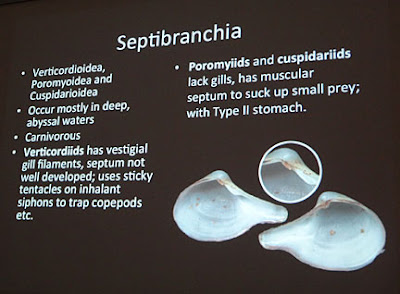 Dr Tan also shared how long long ago in prehistoric times, some bivalves could grow so densely that they produced reefs. Wow! I'm really amazed by bivalves and I am now super motivated to look more carefully at and for them on our shore trips. 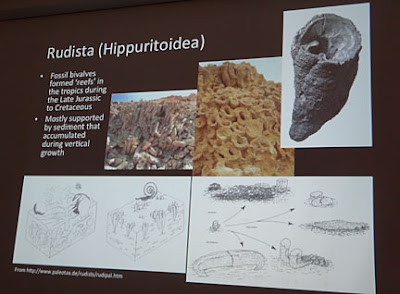 After the lectures, Mei Lin (aka Giant Clam Girl) and Kareen show everyone their work on the Fluted giant clam (Tridacna squamosa). Here's Mei Lin showing everyone the mama and papa Giant clams. 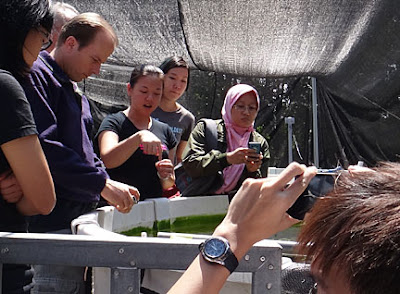 And Kareen showing us the babies that they have raised from scratch! The plan is for these Giant clams to repopulate our reefs. We will learn more about this wonderful effort during their presentation tomorrow. But here's some information about their work. 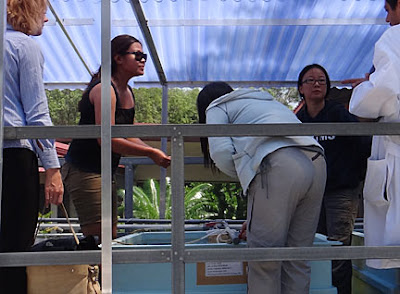 All too soon, it was time to leave St. John's Island. We noticed the amazing visibility in our waters today! Hope Debby and Jeff are having good dives today. Read more about their dives on the Hantu blog. 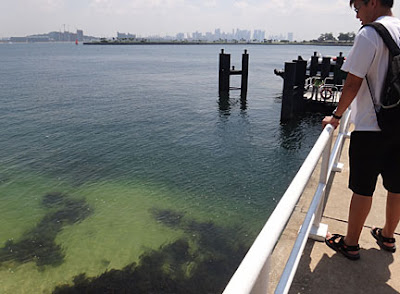 Motivated by the lectures, today some of us decided to devote lunchtime to finding out what bivalves are offered in an ordinary food court. 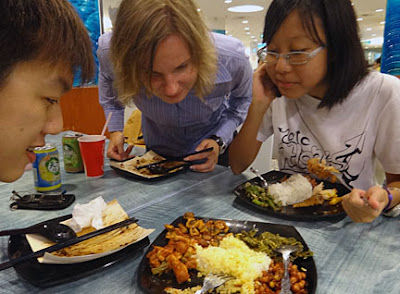 Here's some clams from the Nasi Padang stall. A kind of mussel? 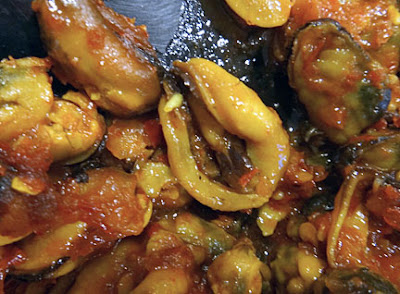 Of course, the familiar 'see ham' in char kway teow. There was also oysters in Oyster omelette, and the Japanese stall offered some kind of scallop, but it was rather pricey. 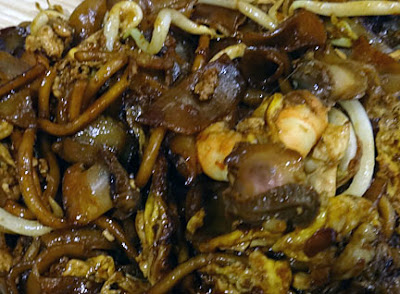 We then decided to see what kind of bivalves are sold at a supermarket. We went to the Giant at Vivo City and found all kinds of frozen bivalves. Various kinds of scallops from Japan, mussels from New Zealand, Chile and other unidentified countries, and even bamboo clams. 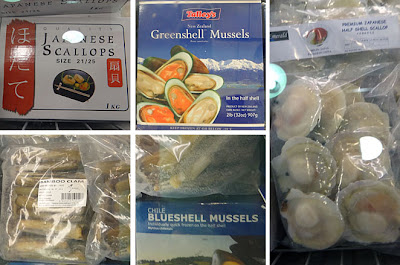 There were more bivalves in cans, including Razor clams, Pacific clams and something called Sea asparagus. Of course, there was also scallop adductor muscles sold dried. And some products made of bivalves including an oyster-and-scallop sauce and Clam chowder. 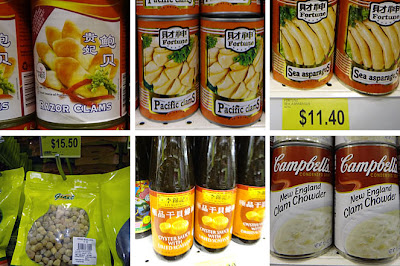 After hunting around a while, we finally found a cosmetic product featuring 'pearls'. 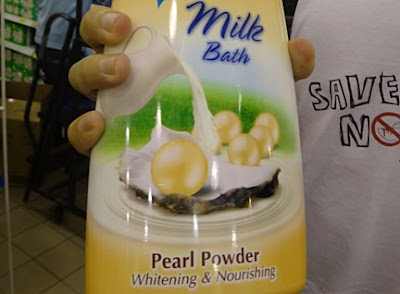 We realise there weren't any snacks featuring bivalves offered at the supermarket. And most of the bivalves sold were rather pricey.

Tomorrow, we will learn more about the ecological role of bivalves, and bivalve aquaculture. There sure is a lot to find out about fascinating bivalves!
Posted by Ria Tan at 7:06 PM