The most difficult reef to explore in Singapore

There is an amazing reef that has settled naturally on the artificial seawalls at Tanah Merah Ferry Terminal. Once a year, Kok Sheng the Human Climbing Crab surveys it to make sure it is well. He shares awesome photos of this reef on his blog: 2011 and 2010 and 2009. 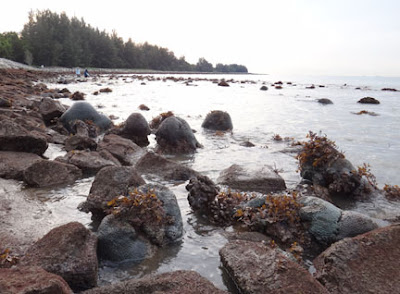 Sadly, Kok Sheng is injured this year and unable to do this annual task. It takes four ordinary people to do the job of one Human Climbing Crab, and not a very good job at that.


We arrive at dawn, on one of the very few daylight super low tides that happens in the year. This is why we can only do this survey once a year. The first problem is to get down the very slippery rocky shore without killing ourselves. Then, to try survey the area without crunching on live corals, or stepping on Mr Stonefish. 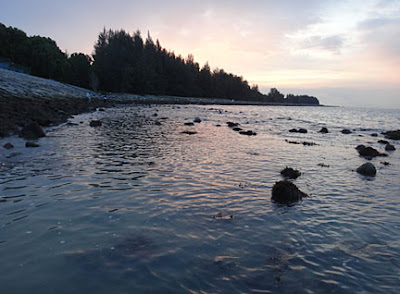 The second problem is to avoid drowning as huge waves wash up when the ferries berth and depart from the Terminal. 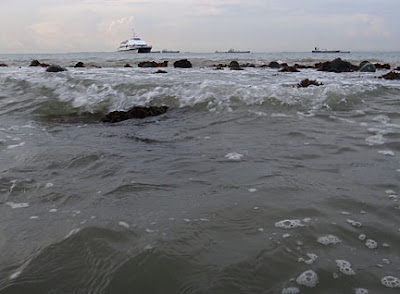 I solved this problem by staying on the water's edge, desperately trying to cling on with arms and legs, shuffling about mostly on my backside. A very poor climbing crab performance. Even here, all kinds of coral colonies are growing nicely on the totally artificial seawall. 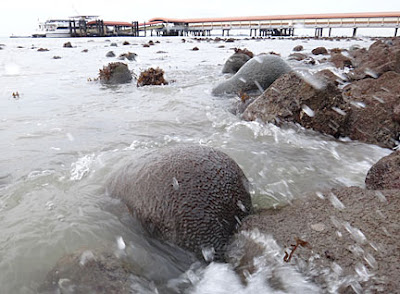 These include some nice colonies of corals that we never see on the mainland except here. As Kok Sheng says, this is probably the best reef on mainland Singapore! 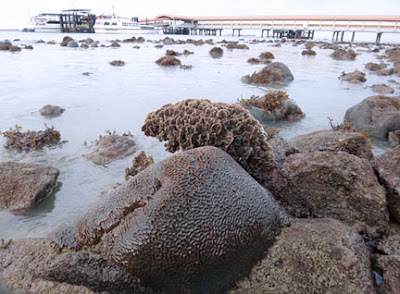 As usual, Favid corals (Family Faviidae) are abundant. I could only use Sneaky Swimming Camera, who doesn't really take good photos. So here's some close ups of nice large colonies. 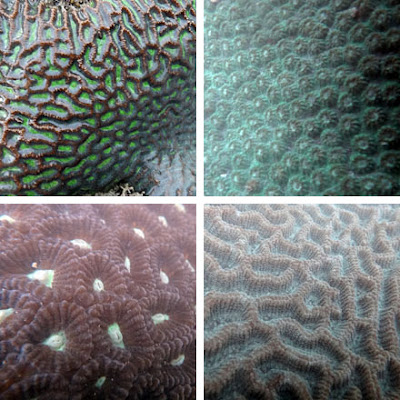 There were also many Disk corals (Turbinaria sp.) of various kinds. 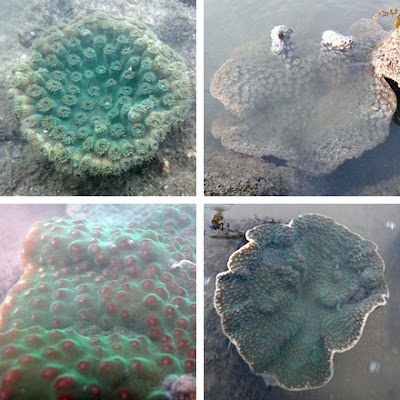 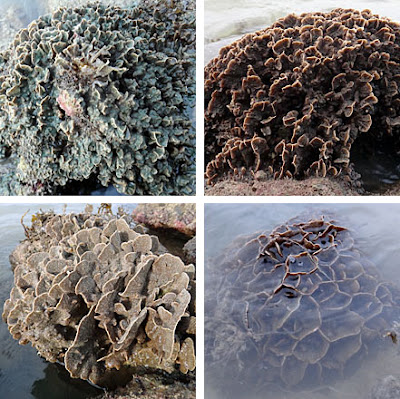 I came across some young Mushroom corals (Fungia sp.), still stuck to rocks, and a small colony of Bracket mushroom coral (Podabacia sp.).

There were some large Acropora coral (Acropora sp.) colonies further away from the wall, and some closer to me. I also came across a few small colonies of Galaxy corals (Galaxea sp.). 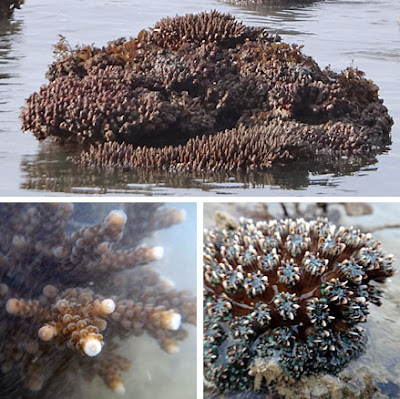 There were even some small Brain corals (Family Mussidae) near the seawall.

I came across a few colonies that died probably recently. The shape of the colony is still obvious, although they have been covered by other encrusting organisms.

I came across a few bleaching colonies, about the same proportion that I've seen on our other recent surveys of our Southern reefs.

The water was too murky for me to see any fishes, but I did come across one Sally-light-foot crab (Grapsus albolineatus) doing a far better job clinging to rocks that I did. And Red eyed reef crab (Eriphia ferox).

Among the rocks, tiny brittle stars and one Frilly sea anemone (Phymanthus sp.).

There's lots of life  under the rocks too! These were coated in colourful sponges and other encrusting marine life, full of scuttling porcelain crabs, and lots of tiny snails of all kinds. 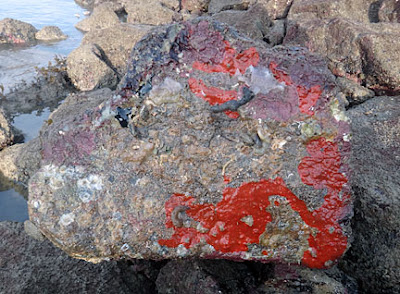 Even the bravest of the team managed to only go a little away from the seawall. It was just too scary to go all the way to the reef edge. Hats off to Kok Sheng for doing a far better job that we did. We have no idea how he does it. We wish Kok Sheng a speedy recovery because we need the Human Climbing Crab! 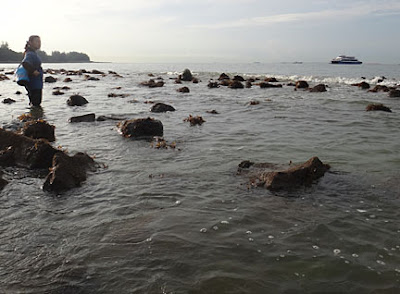 Even at a zero tide level, most of the corals are still submerged. And we only managed to do a small portion of the entire stretch. This stretch of shore was hit by the massive oil spill of May 2010 and global coral bleaching in the same year. It was good to see that most of the corals seemed healthy. With a good variety of species. While I can survey the other intertidal parts of Tanah Merah every month or so, this stretch can only be done once a year. 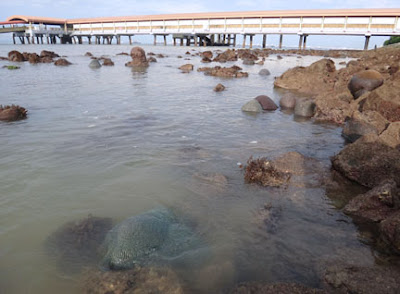 The hardest part of the trip was getting back up the seawall, especially to get past the zone of slippery algae. Here, we have to switch from being climbing crabs to limpets. It was exhausting!

As we left, we noticed a strange set up at the Ferry Terminal. The sign says its a Seimens water project. 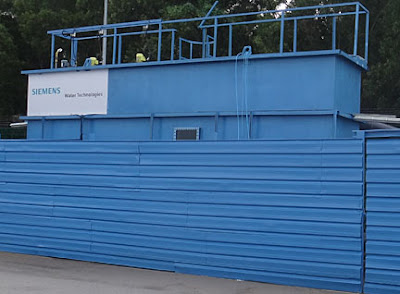 Here's what it looks like behind the hoarding, with large pipes leading out of the installation. 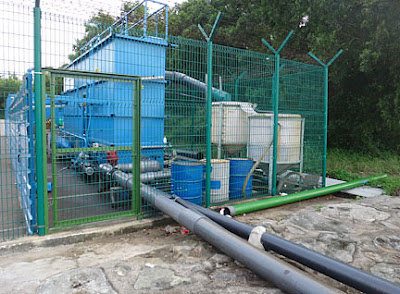 The pipes lead out across the seawall, see the reefs we just explored in front of the jetty at the Ferry Terminal on the horizon. 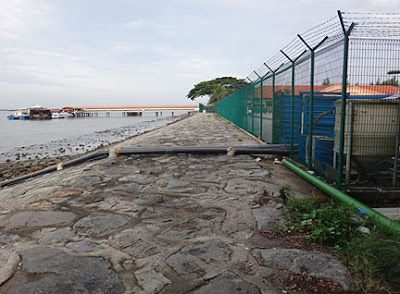 And discharges right next to the reefs that we just explored, at the top right with a bit of the jetty in the background. 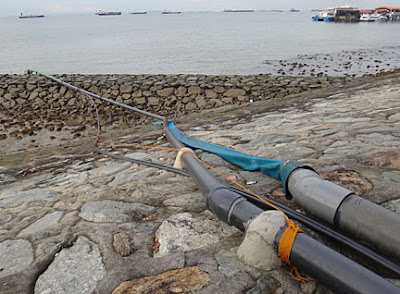 There was this label on a door at the installation. What is "Dissolved Air Floatation"? 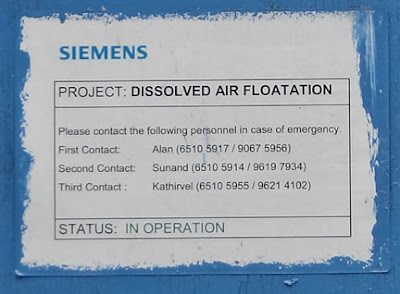 From this diagram and explanation on Water Online dissolved air floatation aims to "recover valuable materials; such as fats, greases, oils, latex, pulp and paper fibers, heat and water for re-use" and that the  "clarified effluent is generally acceptable for safe disposal, return to process or for other plant uses." 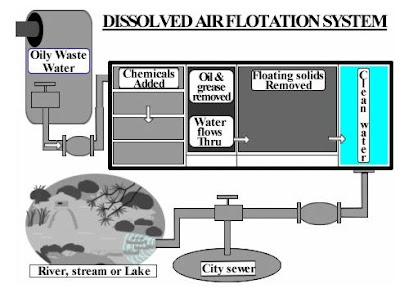 There isn't much information on the Siemens page on dissolved air floatation. But there's an email address (information.water@siemens.com) so I shall be writing to them to ask them what this is all about. Here's their explanation of the project and my additional questions to their reply.

Tomorrow, we head out South to check out a submerged reef next to the Semakau Landfill. And this reef is so much easier to explore than the one we did today. Singapore has amazing reefs and shores, and not enough low tides to cover them all thoroughly!