Kusu Island has amazing reefs and is one of the few locations where it is possible to take this kind of photo. A foreground of rich reefs with the city skyline on the horizon. 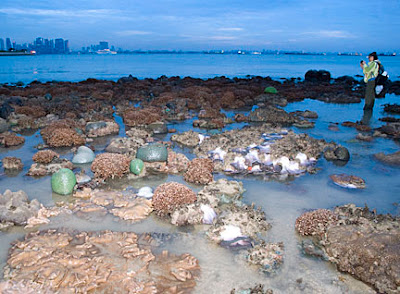 Also, this is only possible during a daylight super low tide, which seldom happens. Today was such a day! I spent most of it surveying the landscape around Kusu Island.


It was well before dawn when the small team first arrived, the lights of the city bright on the horizon. 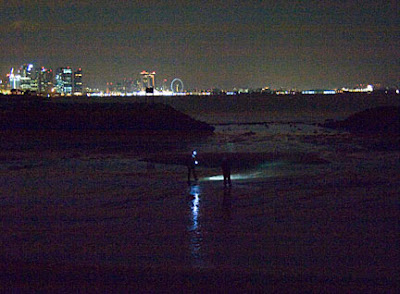 I started squatting on the landscape shot well before sunrise. Because the city lights are switched off at around sunrise, it's tricky to get both the lights and a nice sky. And nice corals too. 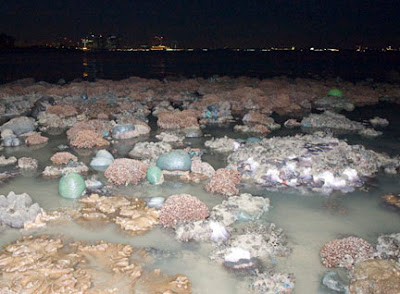 After sunrise, I found the reefs weren't as colourful as they were in the dark. 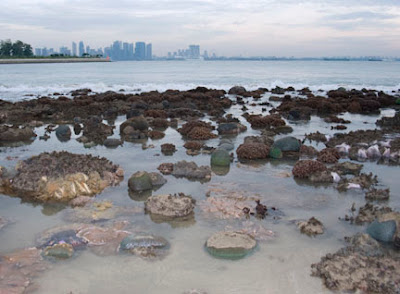 In daylight, the huge ships travelling in the waters around Kusu Island are more obvious. I feel this portion of the reef is doing much better compared to my visit last year. 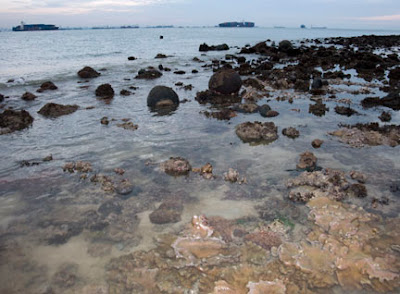 I also checked out the corals growing inside the swimming lagoon. I was delighted to see many colourful healthy corals here. Although the area is still very silty, these living corals manage to keep themselves clear of silt. This effort, however, takes up energy, so too much silty is not good for corals. 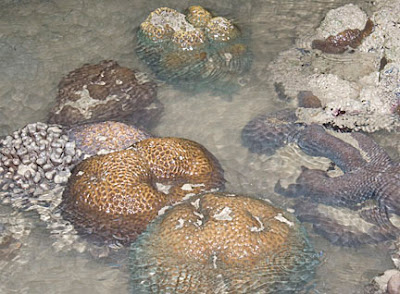 There were portions that were thick with living branching corals! What a lovely sight! 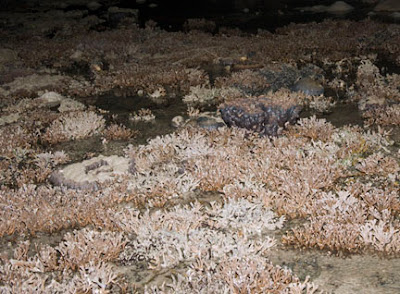 There were many large colonies of hard corals like this colony of Galaxy corals (Galaxea sp.).

And a large colony of Anemone corals (Goniopora sp.). At low tide, all the polyps are retracted. But when submerged, the large polyps emerge and give the colony the appearance of a sea anemone.

Marine life have settled on this old tyre! 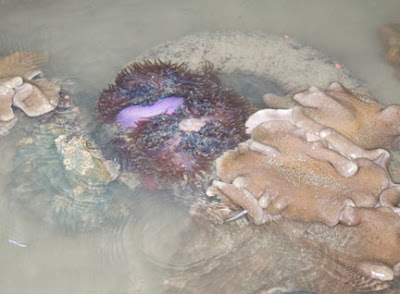 There were many small fishes of all kinds in the water, including several Blue-spotted fantail rays (Taeniura lymma). 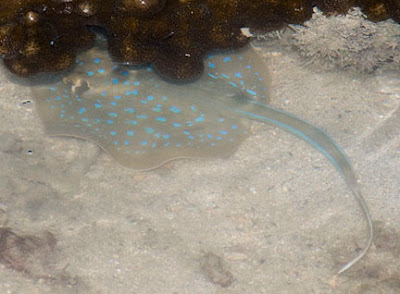 Some of the fishes got too close to this Giant carpet anemones (Stichodactyla gigantea). They were almost immediately immobilised and the anemone gently folded over them. Today, we couldn't find any clown anemonefishes in any of the large anemones. 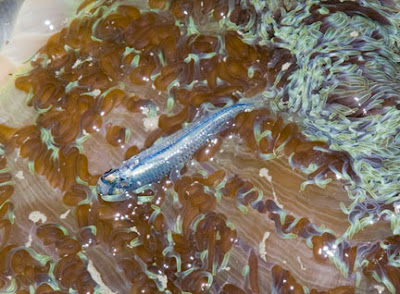 These white marks on hard corals are apparently made by fishes! 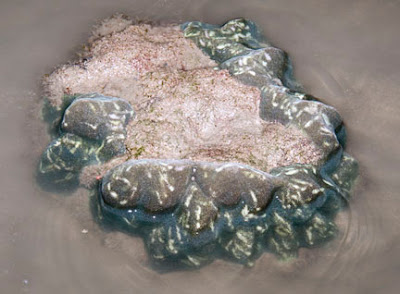 At the mouth of the lagoon, there were the usual large clusters of Magnificent anemones (Heteractis magnifica). They don't look too happy out of water at low tide, but are truly magnificent when submerged. 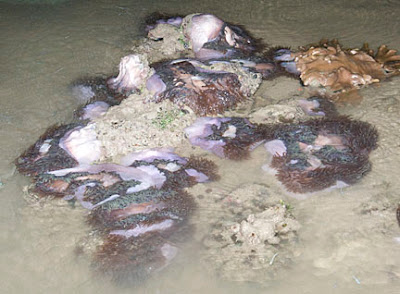 It was good to see the Leathery anemone (Heteractis crispa) is still where I last saw it. This sea anemone is not very commonly seen on our shores. 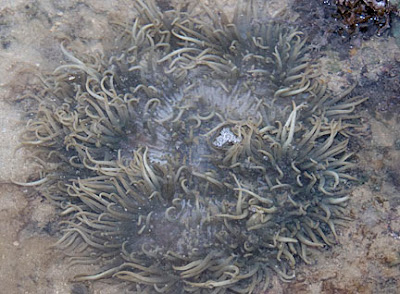 Once again, I spot these Carpet corallimorphs (Order Corallimorpharia) producing strange white stuff. I still have no idea what is going on. 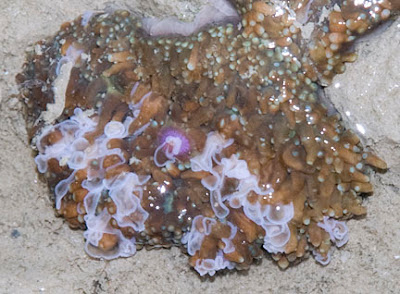 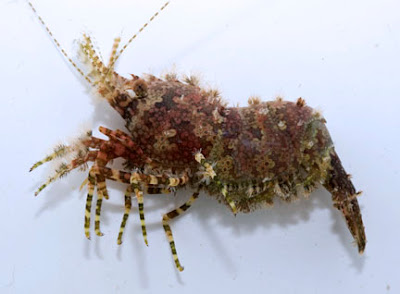 After sunrise, I walked nearly all around the island during the short low tide. Here's a look at the shore on the side where the temple is. The live coral cover here is rather low. But there were a few nice colonies of hard and soft corals. 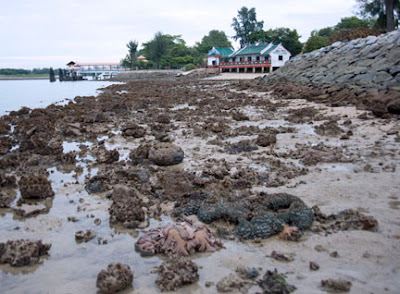 Once again, there is a fish trap near the temple. 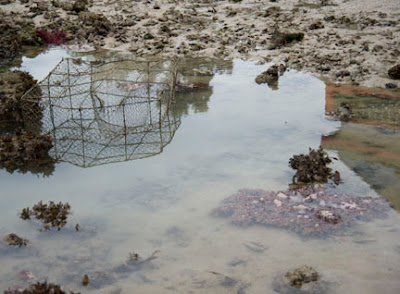 The area where the water runs off from the temple pond is still thick with zoanthids and other marine life. 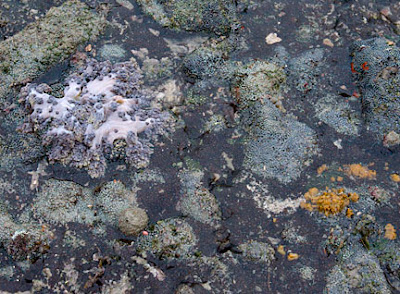 There are lots of hard corals under the jetty! 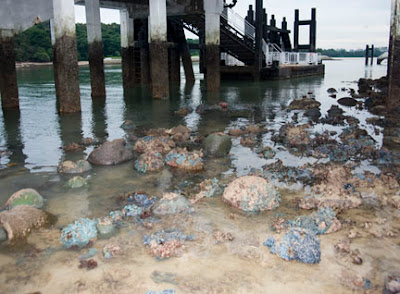 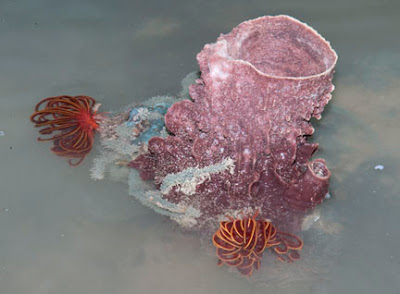 Besides the red feather stars, I also saw one that was brown with white bands.

Here's a small selection of some of the hard corals I saw today. 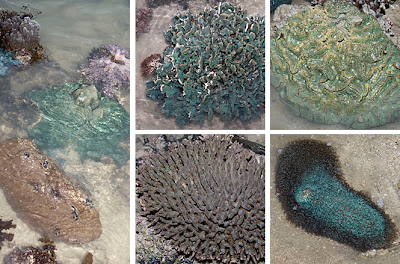 Near the beacon, another patch of corals. But not as lively and beautiful as the reefs facing the city. 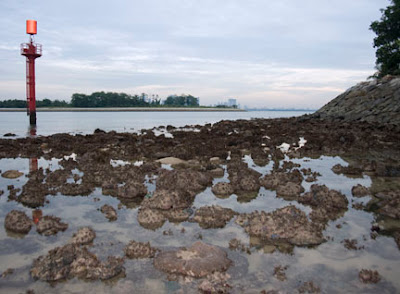 The corals are growing right next to the seawall. The area ringed by the seawall used to be a submerged reef flat. 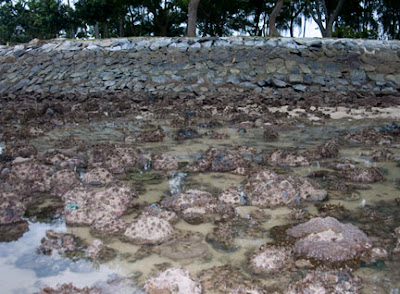 The original submerged reefs are indicated by the dotted portions in the map below of P. Tembakul, one of the old names of Kusu Island. 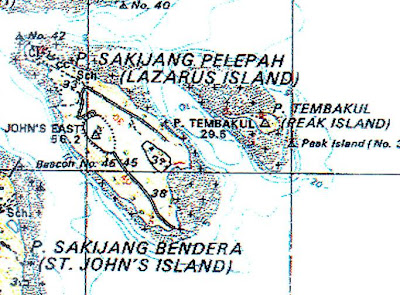 In 1900-1930, the temple on Kusu Island was surrounded by water at high tide. Kusu Island is also known as 'Turtle Island'. Some accounts say that the island originally comprised two portions which resembled a sea turtle with a larger part resembling the shell and a smaller portion the turtle's head emerging from the sea. Kusu Island was originally 1.2 ha. In 1975, there was massive reclamation "to join it with another coral outcrop, making a 8.5ha island resort" More about the history of Kusu Island on the Singapore Celebrates our Reefs blog. 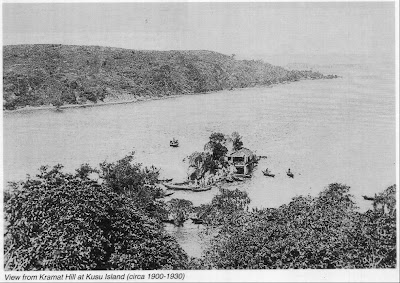 I only came across a few corals that were bleaching. Jocelyne also saw one that was producing slime. Let's hope the reefs don't experience coral bleaching this year!

From the NOAA Coral Reef Watch site, there seems to already be coral bleaching in the northern Philippines. The outlook for Singapore seems ok for now.

Kusu Island  has some of the best reefs that ordinary people can visit. Let's hope they remain well until our next visit. Sadly, we visit it too seldom as there are just too many shores to check up on.

Tomorrow, a heroic effort is planned to document the living reefs at Tanah Merah!