Pulau Sekudu: a jewel of our Northern shores

Pulau Sekudu is a tiny but rich island that lies just across from Chek Jawa, with a narrow but deep channel in between. 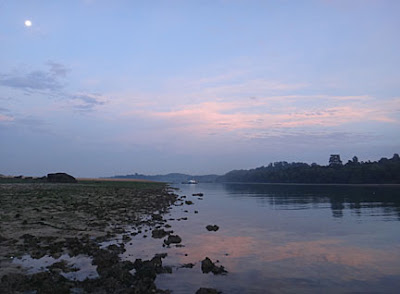 We arrive under a beautiful full moon and saw a stunning array of marine life! All kinds of sea stars and echinoderms, corals, sponges, strange sea anemones and more! Pulau Sekudu is indeed a precious part of our northern shores.

Today, the tide is very low. It is a minus zero tide! So finally, I get a chance to check out the reef edge on this tiny island. I'm glad to see that there are still a wide variety of sponges growing on the rubble. Although the sponges are not as thickly encrusting as I remember them from the past. 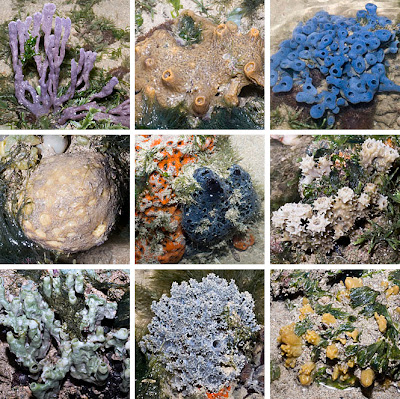 It's the first time I've seen this strange large sponge. I have no idea what it is. 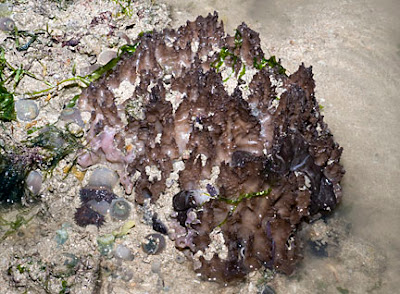 How nice to see these weird blue blobs again. We had seen them at Pulau Ubin in 2010. Today, I managed to get a shot of some that were still submerged. They sure do look like some kind of ascidian. 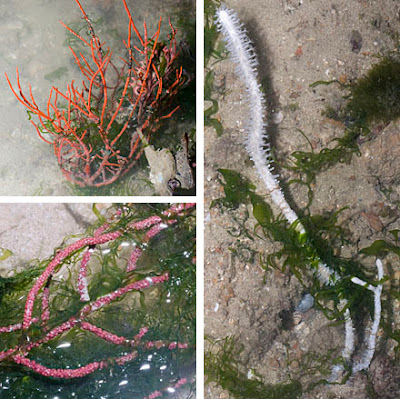 Sea fans are a great home for all kinds of animals. Today I saw several Winged oysters very firmly attached to the seafans. The seafan 'branches' are thickly twined with countless tiny colourful brittle stars (Ophiothela danae)! I only saw the little red ovulid snail on a red sea fan when I processed the photos at home! 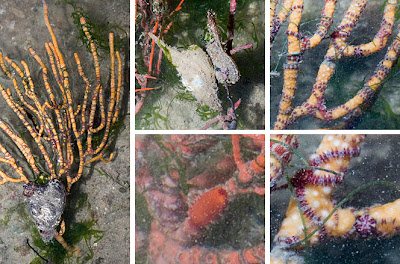 Another strange thing I noticed where these tight bands of green seaweed around some (not all) of the Candelabra sea fans. The bands were so tight that they actually constricted the growth of the sea fan. Hmm, I wonder what is going on? 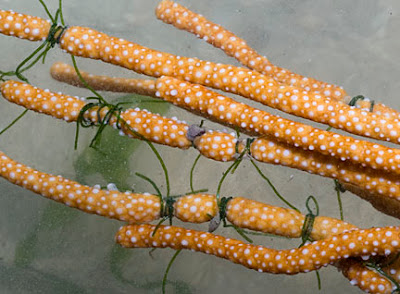 Sam noticed tiny ovulid snails living in a soft coral too! These False coweries live on flowery soft corals (Family Neptheidae). They actually eat the soft coral. Their shells are plain or have some boring markings. 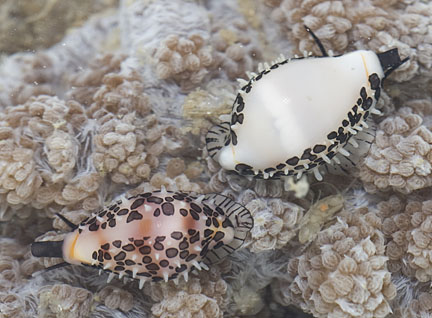 When their body mantle covers their shells, the snails blend perfectly into their soft coral home! 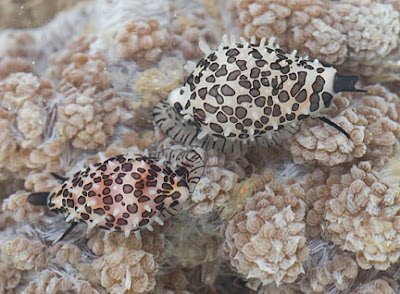 Later on, we learnt that Mei Lin and the rest also found ovulids in another kind of soft coral. We're not sure if these are the same kind of snails. 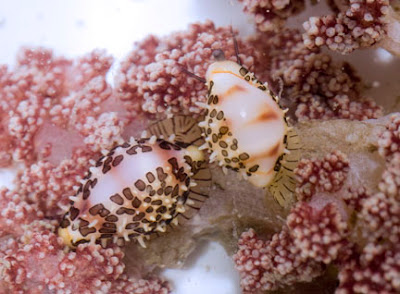 There are even living hard corals here! I saw only two, and they look like the same hard corals that I had seen since I have been visiting Pulau Sekudu for the last ten years or so. This one looks like some kind of Boulder sandpaper coral (Psammocora sp.). 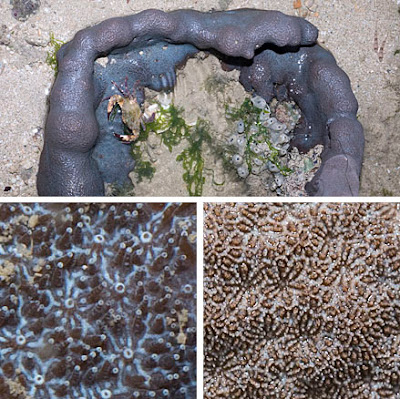 While this one looks like some kind of Favid coral with tiny rings (Cyphastrea sp.).

Another strange encounter was with these super huge zoanthids! See my size 7 (20cm long) bootie next to the clump. I have no idea if these are something different from the usual zoanthids that we see. They are much larger than the Broad zoanthids (Palythoa mutuki).

As usual, the most amazing find is seen just before we have to leave as the tide rushes in. It's some kind of strange anemone. It looks like a green version of the Haeckel's anemone (Actinostephanus haeckeli). I saw something like this at Chek Jawa in 2009. A little earlier, Sam found a black lump that did look like a retracted Haeckel's anemone. We'll have to deal with this scary look anemone another time. 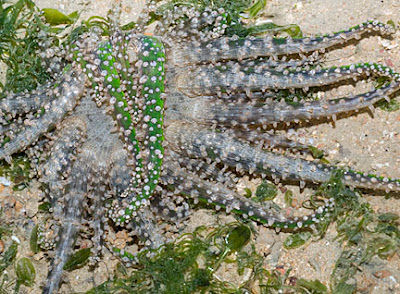 There were lots of Swimming anemones (Boloceroides mcmurrichi) on the shore today. Both big ones as well as lots and lots of teeny tiny ones all over the seagrass meadows. The rubbly area was carpeted with Posy anemones.There were also lots of flowery sea pens (Family Veretillidae), Common sea pens (Pteroides sp.) and some Common peacock anemones (Order Ceriantharia). And I saw some very small ball flowery soft corals (Family Nephtheidae).

There are a lot of food fishes on Pulau Sekudu. I saw a small Chocolate hind (Cephalopolis boenak), a kind of grouper. Also several rabbitfishes (Siganus canaliculatus), Hoplodoris nodulosa and several Spangled emperors (Lethrinus nebulosus). There were of course also lots of other fishes like gobies (Family Gobiidae), but there was just too many other things to pay attention to.

Pulau Sekudu is nudiland! A bewildering variety of nudibranchs and slugs can be found here. I only found the obvious and easy ones like the Blue dragon (Pteraeolidia ianthinia), Hoplodoris nodulosa, Discodoris lilacina, Thordisa villosa. The rest of the team saw an amazing number of species. Chay Hoon will as usual, manage the nudi situation. James has already posted lovely photos of a bunch of slugs! 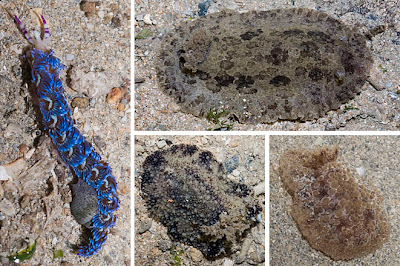 These may look like slugs but they are actually cowrie snails! These are Miliaris cowrie (Cypraea miliaris), I think. The two of them don't look exactly the same in both shell and body pattern. Hmm...

There are also many Onyx cowries (Cypraea onyx). This one was suspiciously next to a rather 'clean' sponge. Was it eating the sponge? Among the other molluscs I saw were plenty of Fan shell clams (Family Pinnidae) everywhere. 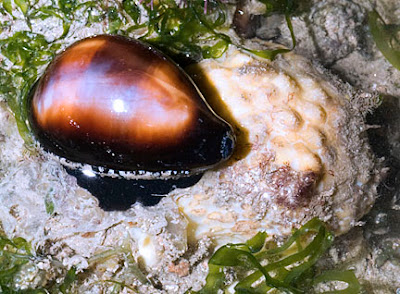 Our northern shores are a haven for echinoderms! This includes sea stars. Today I saw lots and lots of Biscuit star (Goniodiscaster scaber), several young Cake sea stars (Anthenea aspera) including a bright orange one. Sam found a Spiny sea star (Gymnanthenea laevis) but I forgot to take a photo of it. In the dark, there were some Painted sand stars (Astropecten sp.) and Plain sand star (Astropecten sp.). Marcus found a Crown sea star (Asterina coronata) and also a Knobbly sea star (Protoreaster nodusus) though. 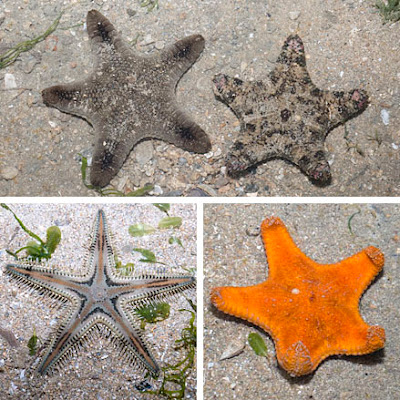 Sea urchins are echinoderms too! There were lots of large White sea urchins (Salmacis sp.), including some that had bright pink spines. Are they also Salmacis species? I saw some Black sea urchins (Temnopleurus sp.), pink Thorny sea urchin (Prionocidaris sp.) and two huge Long spined black sea urchins (Diadema sp.) which are more commonly seen on our Southern reefs. 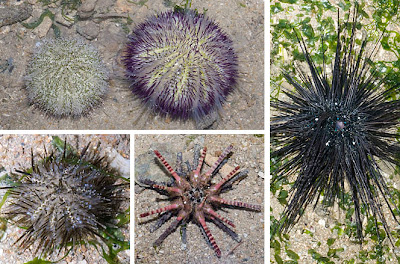 Mei Lin found tiny little heart urchins! These might be Mareta planulata, our first sighting of them in the North. 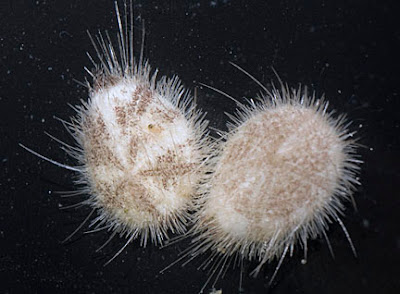 Marcus found a lovely Blue feather star. We often see this also on Pulau Ubin as well as even Changi. 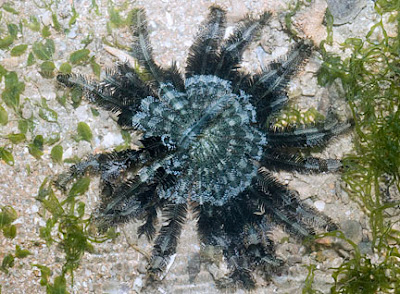 There are lush seagrass meadows on Pulau Sekudu. I saw a few patches of nice long Tape seagrass (Enhalus acoroides). But the most abundant species are Spoon seagrasses (Halophila ovalis) . There are also lots of Fern seagrass (Halophila spinulosa). Today I didn't manage to see the Serrated ribbon seagrass (Cymodocea serrulata) that I saw on my last trip. 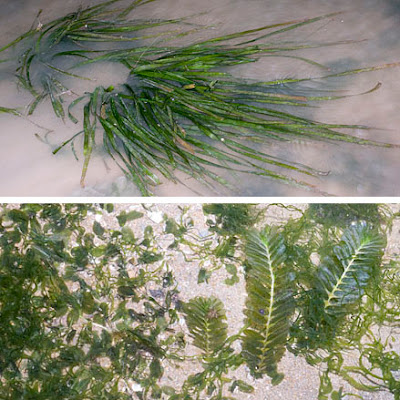 Alas, I saw a fish trap right at the edge of the reef. It was a bit tricky to get to in the dark, so I had to leave it there. We also saw a massive hole in the reef edge (about 5m wide and very deep). It was probably made by a boat striking Pulau Sekudu. 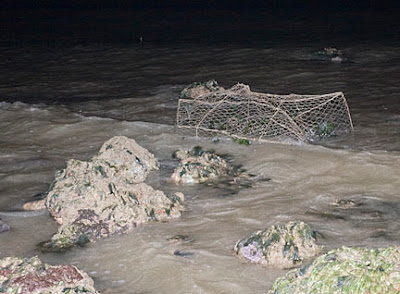 We started well before sunrise, under a wonderful full moon with a more or less clear sky! 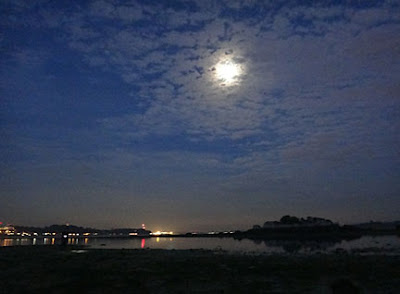 We enjoyed a beautiful sunrise, with the Chek Jawa beacon on the horizon. But as usual, sunrise means the tide is turning and it's almost time to go home. 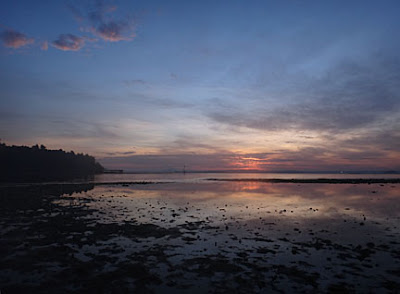 There are lots and lots of Haddon's carpet anemones (Stichodactyla haddoni) on Pulau Sekudu. The density seems higher than currently at Chek Jawa. Many carpet anemones were killed during the mass deaths of 2007, and from what I see on Chek Jawa, the numbers do not seem to have returned there since then. 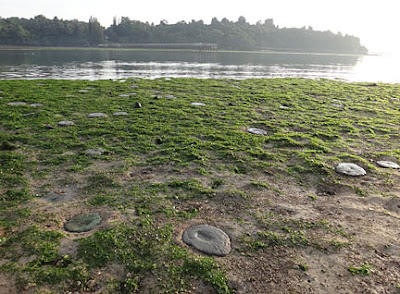 Pulau Sekudu seems to be the last stronghold of the amazing marine life that I used to see on Chek Jawa in the past! Hopefully, should the situation at Chek Jawa return to the way it was before the 2007 mass deaths, the marine life from Pulau Sekudu will help to 're-seed' Chek Jawa. Pulau Sekudu is indeed an important part of the ecosystems not only at Chek Jawa, but also other northern shores like Changi.

We seldom visit this pretty island nowadays as it is off limits since 2007 and requires special permission from NParks. We were visiting with NParks permission to do a quick survey. Our last survey was in October 2011. Thanks to Alan at NParks for permission to visit and to Chay Hoon for organising the trip! And for the rest of the volunteers for helping to thoroughly survey this small but very rich island.