Fabulous Marine Exhibition at the Festival of Biodiversity

The Marine Exhibition was a great success! Thanks to the awesome panels put together by Sabrina of NParks, and the many interesting booths manned by volunteers of various marine groups. 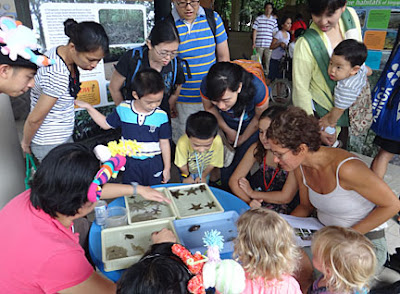 Here's a glimpse of some of the whirlwind of events that took place last weekend.


The live sea star station is a big hit! It allowed the kids to have a closer look and to gently touch some common marine animals that can be found on our shores. 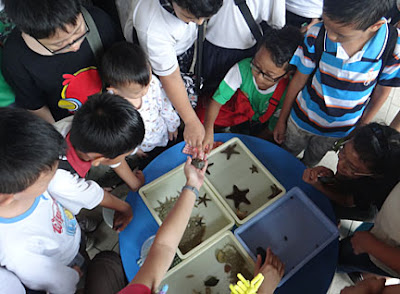 There was also a tricky thought-provoking booth featuring bits of dead animals that ordinary people can find on a shore. It's called Seashore CSI: What died? Who killed it?
The Hantu Bloggers had a great game getting the littlest kids to figure out a food chain! And thus the importance of conserving the entire ecosystem. 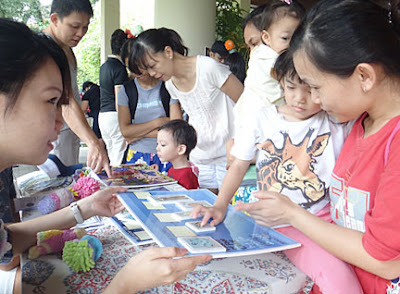 Chay Hoon's awesome marine colouring sheet is a big hit! The kids not only learn more about our marine life, but also some of the threats to it. Shao Wei is pointing out how some of the pictures don't belong in the sea. Like the plastic bag that looks like a jellyfish and is often mistakenly eaten by sea turtles who may then get sick and die. 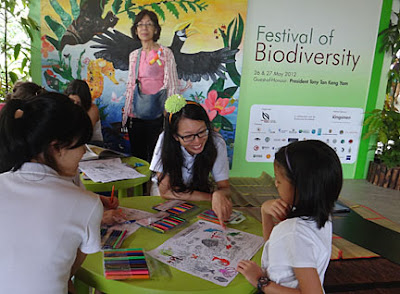 Here's one of the coloured sheets, awesome! Rene has an entire facebook album of coloured sheets.
The President graced the Festival on Saturday afternoon, launching two new books. Here Khew Sin Khoon is presenting the President with "Caterpillars Of Singapore's Butterflies" by himself and Horace Tan. The other book is "Our Fragile Rainforest" by Dr Leong Tzi Ming and James Gan. MOS Tan Chuan Jin also spoke about our biodiversity and some new initiatives, which were covered in the media. 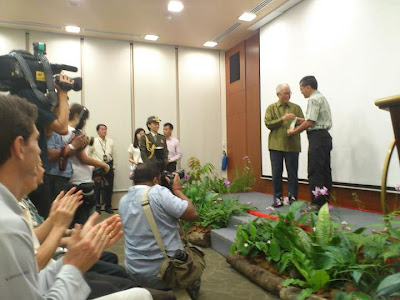 After the formalities, the President had a quick look around the Festival. Pei Yan of the Naked Hermit Crabs shows the President our live sea stars! She later shared that it was rather dark at the location (we pushed up the station for a smoother route through the exhibition) but fortunately, the film crew brought huge lights! Hurray! 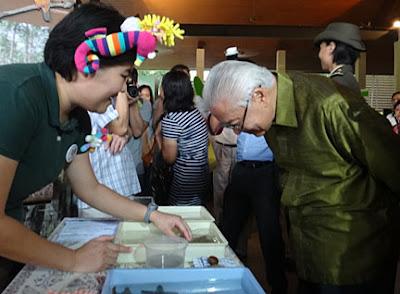 Sankar also shared about our seagrasses with the President, as well as about TeamSeagrass. 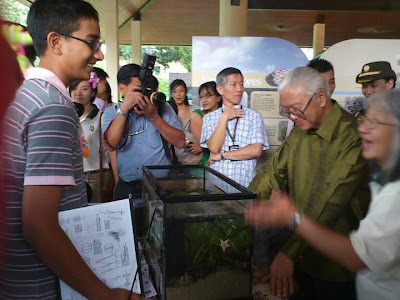 And Chay Hoon representing the Blue Water Volunteers shared more with the President at the Seashore CSI station. Thankfully Debby got a good shot of this.
The Star of the Show was Rick at his live mangrove station by the Mangrove Action Squad. His photo appeared on the Straits Times feature of the President's visit to the Festival! Bravo! 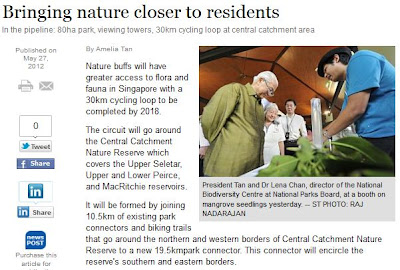 The President himself shared a photo of his trip to the Festival on his own facebook album! 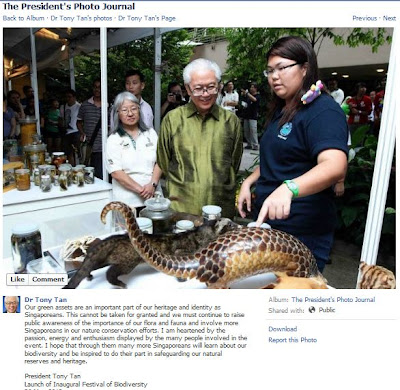 The Marine Exhibition is awesome!! It is not only colourful and attractive with lots of photos and information, it also had lots of interactive features! 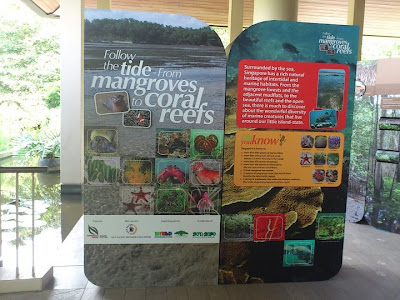 There are rollers to turn and find out more. 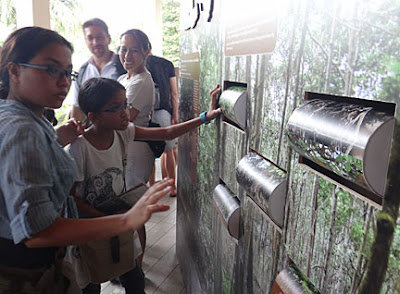 Little windows to slide to learn about our marine life. 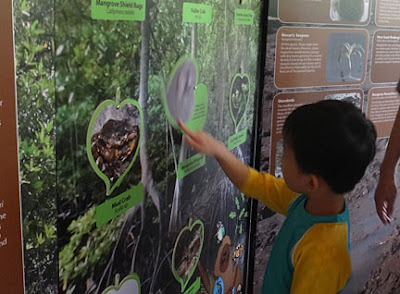 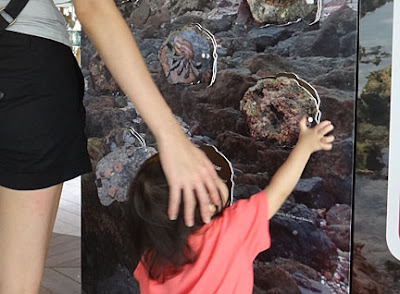 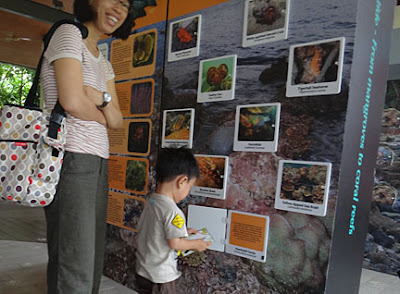 The visitors are obviously enthralled by the exhibition with mums and dads sharing with their kids.
During the Festival, volunteers like Debby of the Hantu Bloggers were at hand to explain some of the aspects of the Exhibition. 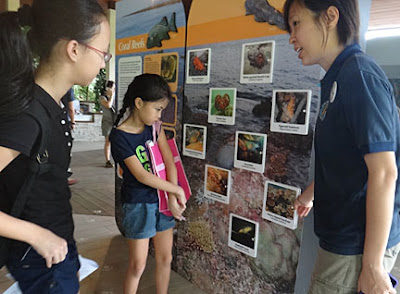 Another fun feature of the exhibition, was a cut out of a pair of anemone shrimps in an anemone for kids to take photos with. 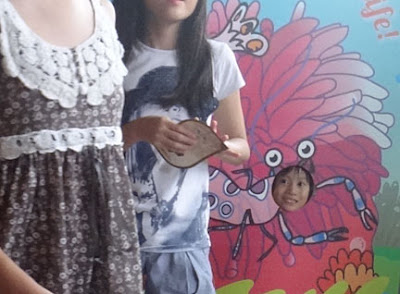 Some of the photos were a little naughty! 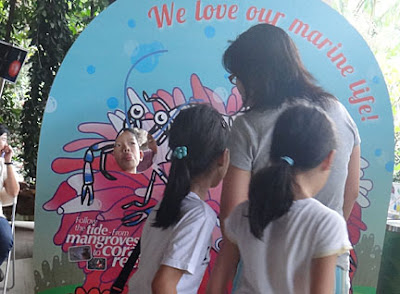 The talented Sabrina is the heart and brains behind this awesome exhibition! After the Festival, this exhibition will continue to rove around various locations in Singapore for a year. So even more people will get to see and learn about our marine life. Hurray! More about the Marine Exhibition. 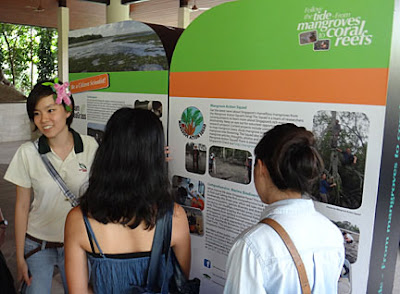 The Marine Exhibition was manned by volunteers from these marine groups!

All this effort is well rewarded by the delight visitors express at learning more about our shores. The littlest visitors are the cutest. This little one is taking photos with her toy phone! 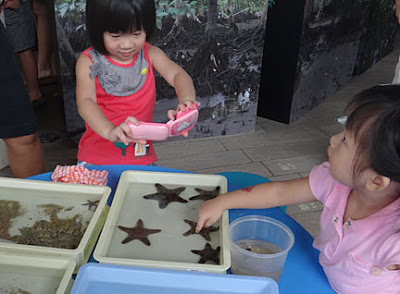 I was greatly relieved that the fuzzy marine mascots were well received by the volunteers! They happily wore them to add to the festive spirit! 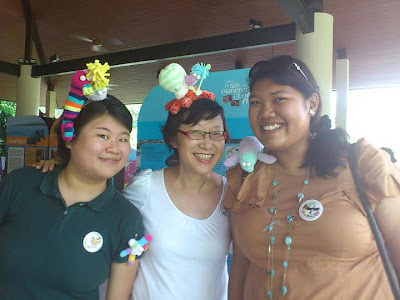 Thanks to Chay Hoon for making a zillion eyeballs for the fuzzy marine mascots. And also these awesome transparent anemone shrimps which are well settled in this anemone sitting on Jeffrey Low's shoulder.
There were also lots of other interactive booths at the Festival! The Mega Marine Survey booth had fascinating specimens of what the volunteers had discovered recently on our shores. Come join the Survey to help find out more about our marine biodiversity!
The Raffles Museum of Biodiversity Research booth is tucked away upstairs so the Toddycats have set up a little teaser station downstairs with cool specimens to get visitors to go up and have a look at the main booth. 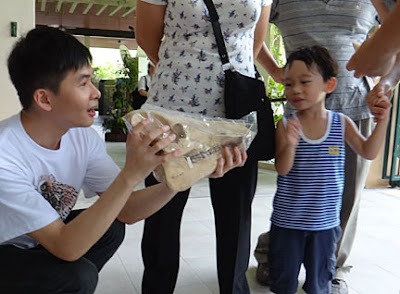 At the Festival, the Raffles Museum booth showcased the largest display so far, outside the museum, of specimens of Singapore's biodiversity. Manned by the tireless and friendly Toddycats! 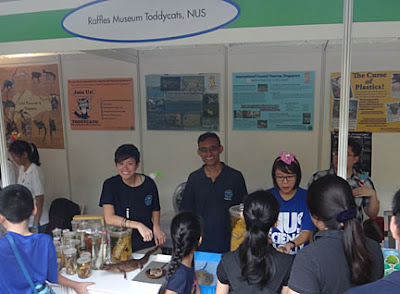 Here's David Tan enthusiastically sharing about his favourite birds! David together with Eunice Soh and Jocelyne Sze also put together a video clip called "Singapore got wildlife, meh?" for the Festival. 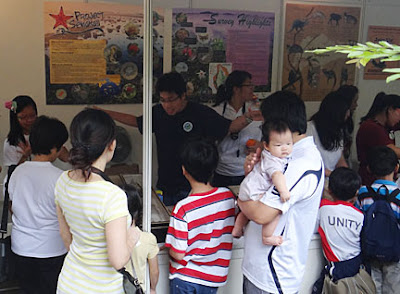 Pui San is conducting more art workshops! Weeks before, he organised sessions so ordinary people could help paint the mosaic mural which was unveiled at the Festival. The result is not only an amazing mural, but also a wider appreciation of nature through art. You can join Pui San every month as he conducts free art appreciation sessions at Sungei Buloh Wetland Reserve. 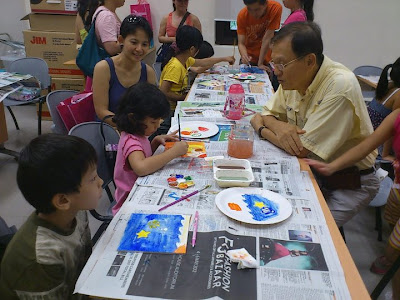 Annabelle and the NParks National Biodiversity Centre team had a Connecting with Nature booth to find out more about how ordinary people want to interact with our wildlife. Don't worry if  you missed it, the survey will be online too! 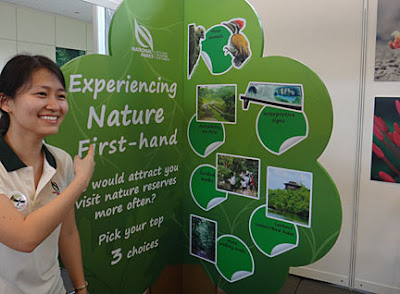 Ter Yang and the Nature Society (Singapore) team have a great booth with lots of materials on our wildlife. 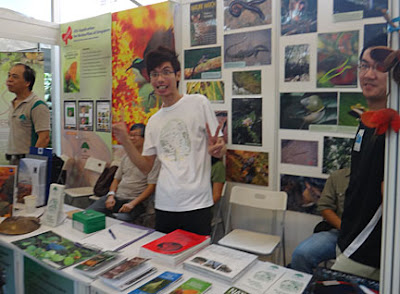 At the Southeast Asian Biodiversity Society booth, I had a glimpse of Siyang's awesome Singapore sea cucumber poster! 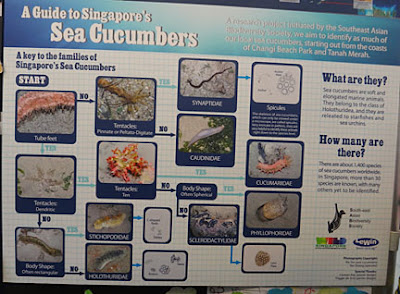 On Saturday, I also attended an event to honour Ambassador Tommy Koh. I was delighted that during the dialogue session, Ambassador Koh mentioned that one of the issues he feels should be pursued is to establish a Marine Protected Area (MPA) in Singapore!

There were also a ton of other concurrent events that I just couldn't attend. A symposium, many many talks, film screenings, workshops and more!

At the end of the exhausting two-day event, we rushed off to return the live animals to the sea. 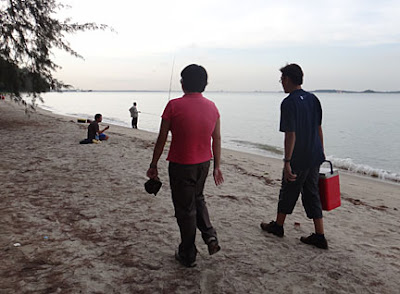 Goodbye sea stars and friends. Thank you for being part of the Festival so that children and ordinary people can learn more about our shores! 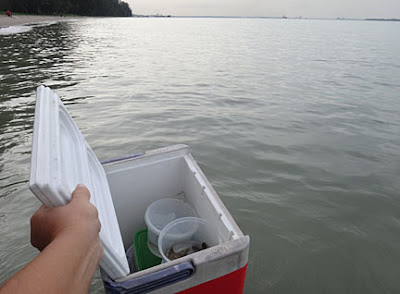 All this would not have been possible without the support of more than 40 volunteers. More about the wonderful people behind the scenes.

More about the event on the Festival of Biodiversity blog

Posts by others on the Festival

More photos of the Festival