Today I saw a pair of NEA officers spraying chemicals to control mosquitoes at Chek Jawa. 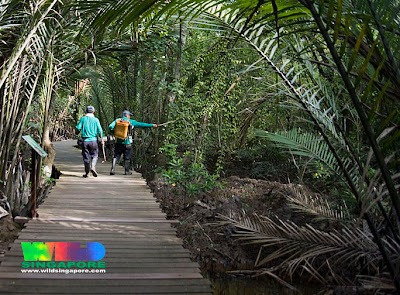 They sprayed along the Mangrove Boardwalk, and got off the boardwalk to spray along the rocky shore as well.

I followed them for a while taking photos of what they were doing. Oddly (to me), they did not check the area until they got to the mangrove boardwalk. They then checked and sprayed the ground near the Jejawi Tower.

They sprayed all around the base of Jejawi Tower and all along the Nipah palm area.

They walked the entire back mangrove portion of the Mangrove Boardwalk and sprayed to the left and right of the boardwalk. There didn't seem to be much checking for mosquitos before spraying.

I fondly call this stretch of the boardwalk "Mosquito Valley". It is indeed full of mosquitoes, but also very rich in marine life which is easily seen by the smallest child!

The NEA officers sprayed all along the boardwalk until they got to the coast. When they got off the boardwalk and started to the spray the back mangroves further.

They did this area quite thoroughly.

I was surprised to see them get off the boardwalk and start to check and spray the natural rocky shores that are usually submerged at high tide.

They even checked the pools below the mid-water mark. Whatever is sprayed here will simply be washed into the rest of the shore at the next high tide.

I saw them heading towards the rest of the rocky shore, and had to leave as I was here to help guide at the Naked Hermit Crab walk.

Later on, I met them coming off the rocky shore before House No. 1. I was heartened to see that one of them removed some large litter from the shore. The officers were friendly and seemed professional in their job. They are probably just carrying out instructions.

The area I saw them spray is marked in blue. I think they did the entire rocky shore until where I met them again at the blue spot marked 'End'.

More photos of what I saw in this slide show.
I overheard them saying they plan to fog the area as well. I met some students doing research who said they saw NEA spraying on another occasion as well.

I'm not sure what chemicals are used in the spray. During the walk today, I could smell the sharp kerosene-like odour of the chemicals all along the Mangrove Boardwalk. I wonder if the chemicals will in fact cause an imbalance in the ecosystem that will eliminate natural predators of the mosquitoes and just make the mosquito problem worse?

I think this action was probably taken because of complaints by visitors of mosquitoes. Park managers often have to balance such complaints with the need to protect biodiversity.

Indeed, the mosquitoes at Chek Jawa can be abundant and fierce especially in the back mangroves. But the Naked Hermit Crabs so far have not had much problems. We alert our visitors to be prepared with repellent, and we ourselves dress in longs to minimise bites. The back mangroves is among our favourite stretches with much marine life. And the rocky shore and area adjacent is full of life too. More of what I saw today.

I have spoken to the NParks officers managing Chek Jawa. They say NEA is only supposed to conduct mosquito control on areas not affected by the tides and they will speak to NEA about this. But even in areas above the tidal influence, wildlife such as wild boar may drink the freshwater. Today, I saw the friendly Mama wild boar with her seven piglets and two older offspring hanging around Chek Jawa as usual. 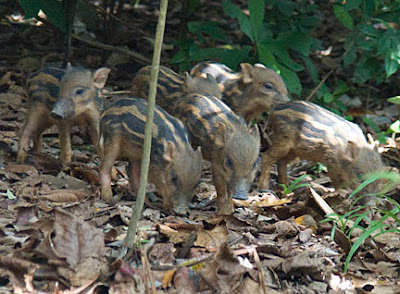 Instead of spraying chemicals on the shore, it would be less damaging to the environment if perhaps visitors could be alerted to expect mosquitoes in certain stretches of the boardwalk? Or if repellent could be sold at the Information Kiosk?

If you can suggest constructive ways to manage this issue, please do leave a comment. Please make polite and constructive comments. I intend to send the link to this post to NEA and NParks as public feedback from those of us who feel spraying chemicals in a special habitat like Chek Jawa is not an ideal solution.

Comments are moderated. Please do not leave anonymous comments.

[Update 8 May 2012: I just received NEA's reply to my correspondence to them and NParks on the issue]