A gorgeous cool evening at Cyrene Reef with an enthusiastic team of volunteers from Shell! 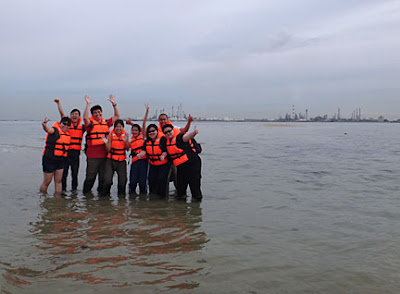 The tide is a little high, but the weather is clear, the company joyful and we saw lots of fabulous marine life!

The water is still a little high when we arrive, but this doesn't deter the brave team! Although Cyrene lies in the middle of the industrial triangle it has amazing marine life! 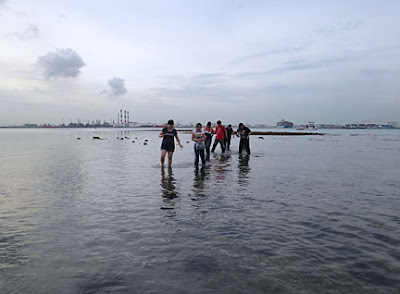 As usual Jumari takes us onto the Reef safely. 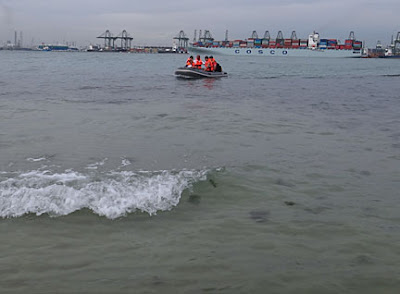 The tide is high so we can get further in where it's sandy and free of Mr Stonefish. 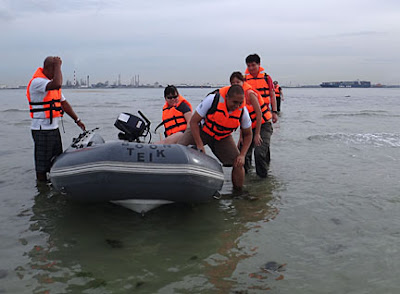 Almost as soon as we landed, we spot lots of Common sea stars (Archaster typicus)! As the tide was still high, they were busy moving around instead of hiding beneath the sand. Many male sea stars (smaller) were checking out the larger females, and we saw some getting into mating position! 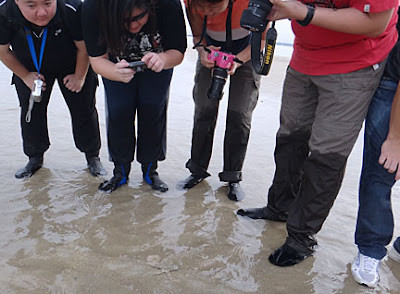 Of course, the highlight of a trip to Cyrene is the many Knobbly sea stars (Protoreaster nodosus) that gather at some parts of this shore. Although the knobs look scary, they are not poisonous. It's safe to gently touch them. 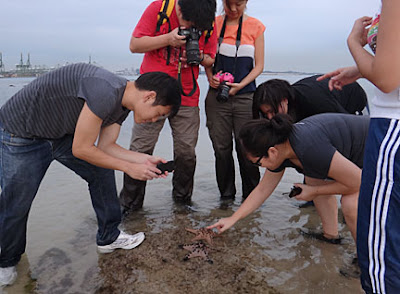 I found it rather interesting to explore Cyrene in rather high water as we saw many creatures that are not often seen during daylight or at low tide! 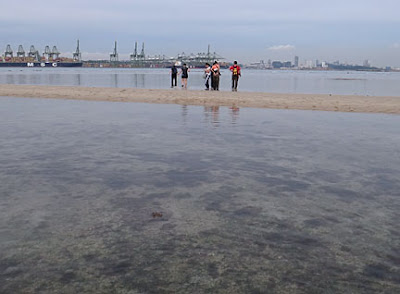 Oh! A Grey bonnet snail (Phalium glaucum) is eating a Cake sand dollar (Arachnoides placenta). There are lots of these sand dollars on Cyrene, but it's uncommon to see these snails during daylight. Perhaps it was because the water was still high! 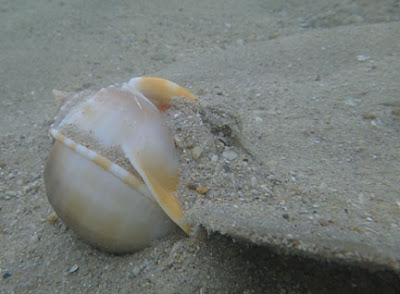 Here's a rather badly framed photo of the snail underwater among our feet. The snail has a cool notch in the shell so that its siphon can stick up above the sand, allowing it to 'snorkel' as it burrows. 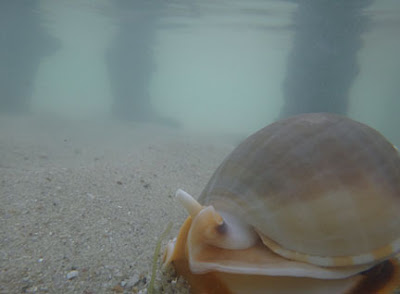 We saw lots of White sea urchins (Salmacis sp). As usual, they were camouflaged by their habit of 'carrying' bits of debris. This sea urchin is more common on our northern shores like Chek Jawa and seldom seen on our southern shores. Indeed, I consider Cyrene the Chek Jawa of the South. We found one White sea urchin with a worm coiled around its mouth. I still haven't figured out what the worm is. 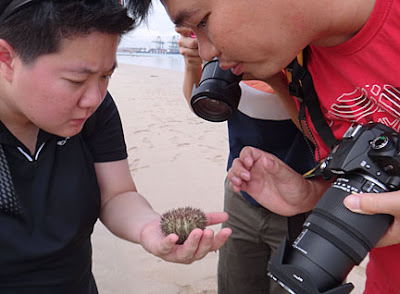 Here's a better photo of the worm I took on Changi, in another kind of sea urchin.

Sea cucumbers have a special tissue that can almost instantly change from rock hard to super soft. This is how sea stars 'amputate' their arms when they are stressed. If we gently hold a sea cucumber, it seems to 'melt'! A feeling that can be rather interesting! We noticed this with a large Garlic bread sea cucumber (Holothuria scabra) that Azlin found. 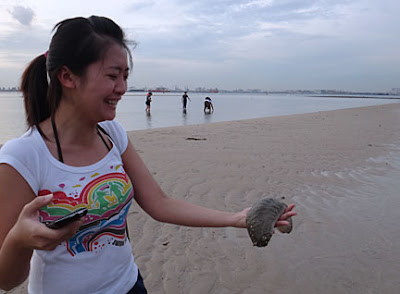 Here we are taking a group photo so we can 'check' into Cyrene! I forgot to ask if it was possible to do so. 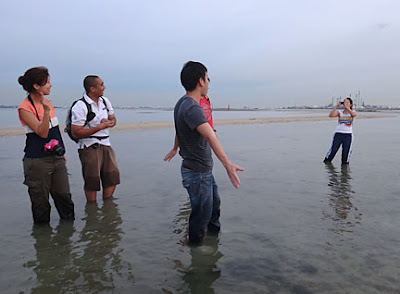 Oh dear, a Marine spider (Desis martensi) had crawled up a trouser leg! Fortunately, we found him early and left him behind on the shore. Marine spiders are real spiders that are truly marine. They come out at low tide to forage, and hide in a bubble of air among coral rubble at high tide. This spider is a male, see the pair of large palps next to his massive jaws. 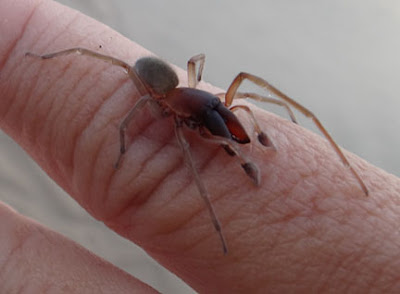 How wonderful that the team found the large Olive snail (possibly Oliva miniacea) that so far I've only seen on Cyrene! This snail is usually buried in the sand and it's not often that we see it moving around above ground. 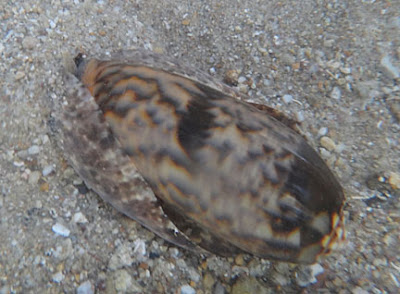 They also spotted a large Black long sea cucumber (Holothuria leucospilota), and pointed out how it was making sand poop. I've not observed this before! 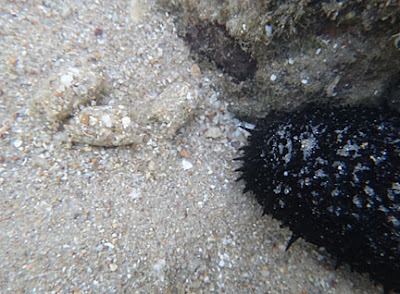 As I tried to show the sea cucumber to the team, it squirted out sticky white strings. It stopped when I put it quickly back into the water. This has never happened to me before! Even when we tried to photograph this phenomenon before in the past. These white strings are very sticky and are called Cuvierian tubules. These strings entangle disturbers so that the sea cucumber is left alone, which is what we did. 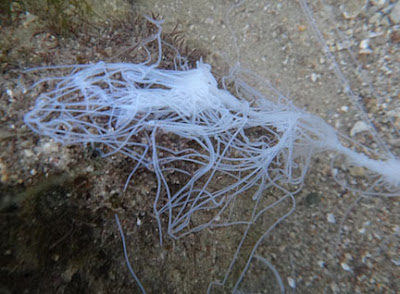 All too soon, the sun started to set and it was time for some last photos before we headed home. 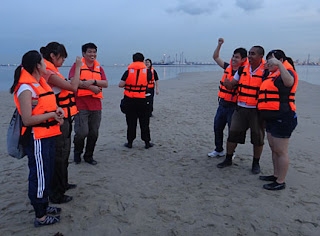 Thanks to Azlin for organising the trip, the wonderful team of Shell volunteers for finding so many interesting animals and putting up with my very lame jokes, and of course Alex and Jumari for taking us there and back safely. I look forward to more trips to Cyrene with the Shell volunteers!

More about Cyrene Reef.
Posted by Ria Tan at 9:44 PM