Can beautiful marine life settle naturally on our artificial structures?

Yes! Here's some amazing examples that I've come across.

This stunning reefscape is growing on an artificial structure and can be easily seen even from above water!

They have settled naturally on the pontoons at Marina at Keppel Bay!

I took these photos at the request of Keppel Marina in their effort to document their marvellous marine life. Debby shares more about the approaches taken by the Marina that allow such marine life to settle here. More of my photos of Keppel Marina here. Debby of Hantu Bloggers, Abigayle of the Blue Water Volunteers and other volunteers also contributed photos to this effort which is showcased on the Keppel Marina website. Marine life we have seen here include hard corals, soft corals, anemones, sea fans, and reef fishes of all kinds.

The pontoon at Seringat-Kiat is also alive! We were amazed by it on our trip in July 2011. Rene shared an entire series of photos of the marine life at this pontoon. Marine life also grows on the pontoons at Raffles Marina. I last saw them in 2009. 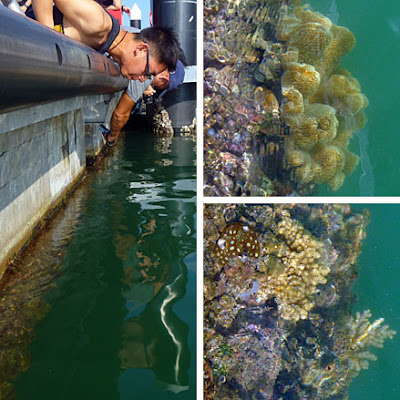 Our artificial seawalls can also provide places for reefs to settle and grow naturally. The most amazing example of this is of course the reef at Tanah Merah Ferry Terminal. Kok Sheng was the one who first shared a closer look a them. Among the hard corals seen here are large colonies of delicate branching and plate-forming corals. As well as less common species such as Lettuce coral (Pavona sp.), Horn coral (Hydnophora sp.) and even rarer species such as Cabbage coral (Trachyphyllia geoffroyi).
The approximately 3km long seawall along Changi East is also alive with reef creatures! Although this area was impacted by the May 2010 oil spill, it remains very much alive. There are hard corals as well as a large variety of reef fishes including moray eels, damselfishes, groupers. The most exciting encounter here for me was with a Spotted eagle ray (Aetobatus narinari) in May 2011.

We have also seen rainbows of sea fans growing on the seawalls along our reclaimed East Coast Park. Kok Sheng shared more of what he saw during a trip in July 2009.
Colourful marine life also settle naturally on jetty legs everywhere. Here's a variety of sea creatures on jetty legs at East Coast Park. We even found a nudibranch here! A similar explosion of sea fans, hydroids, sea cucumbers, sponges encrust jetty and boardwalk legs at Changi, Chek Jawa and Punggol.

Even mangroves can settle naturally on our artificial seawalls! This has happened at Pulau Hantu with a wide variety of mangrove species settling all on their own without anyone planting them there. This includes the less common Bakau pasir (Rhizophora stylosa)! These trees are tall and very healthy, producing lots of propagules that can grow up to become more mangrove trees! More in this post and more photos in this set.

So it's good to know that in 2008, a three-year project was started to develop a "colourful, vibrant seascape" on Singapore's sea walls, jetties and piers. The feasibility study is funded by a $1.4 million research grant from the Ministry of National Development. It involves twenty scientists from the Tropical Marine Science Institute (TMSI) of the National University of Singapore and planners from the Housing Board and Surbana International Consultants.

More about this study in Researchers looking to transplant garden city concept to Singapore waters, Towards a marine paradise by Amresh Gunasingham, Straits Times 4 Jul 09.
Posted by Ria Tan at 5:40 PM