Another side of Kranji: mangroves, trash and horseshoe crab shells

I had a quick look at a small patch of mangroves on the other side of the Kranji Dam. 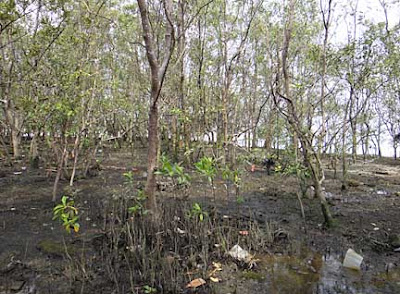 A surprise: many trees growing densely in a small area, behind the industrial sites that line this shore. 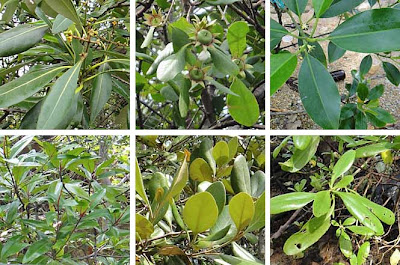 There was a very small patch of the rare Beccari's seagrass (Halophila beccarii) near the drain outfall leading to the mangroves. 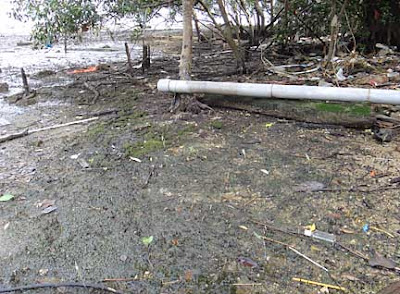 A closer look at the seagrass. Unlike at my trip to the mangroves at Kranji Nature Trail, I couldn't find any other patches of seagrasses in this small stand of mangroves. The scummy stuff under the trees were seaweeds. 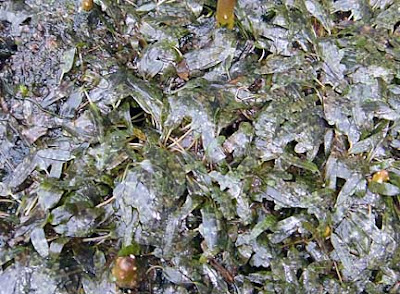 I saw a lot of shells of the Mangrove horseshoe crab (Carcinoscorpius rotundicauda) on the high shore. 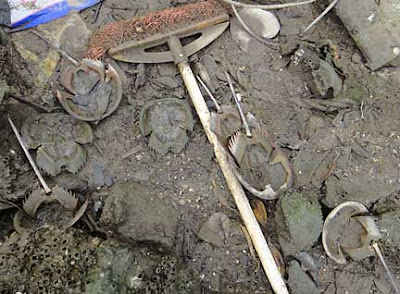 More horseshoe crab shells. I think these are moults and not dead crabs. It wasn't stinky and there were no buzzing swarms of flies over these shells, like there were over the one or two dead fishes I came across. 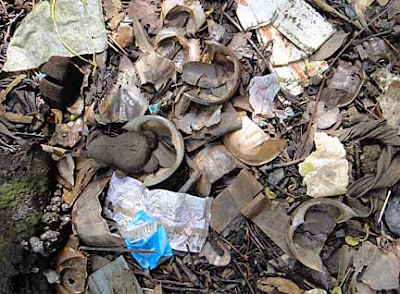 There is a huge accumulation of trash on the high shore. 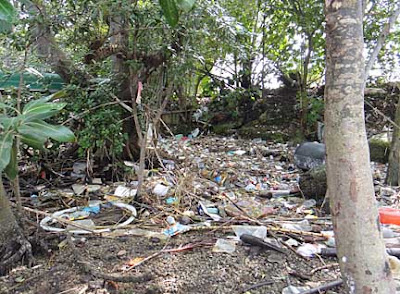 Trash is also stuck among the trees. 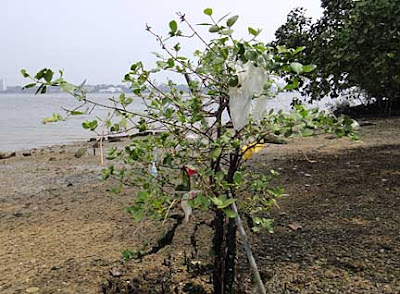 The trash line is very thick in some parts. 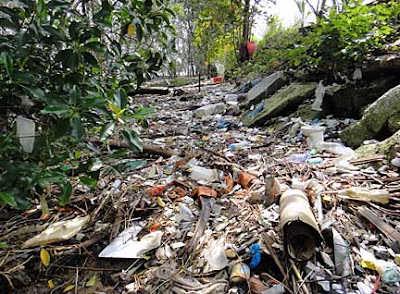 This appears to be a refrigerator that is chained closed and positioned on a frame on the high shore. I have no idea what is going on. 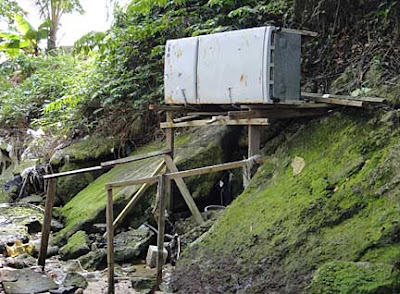 This huge heavy vehicle is literally hanging over the high shore. What if it falls over? Oh dear. 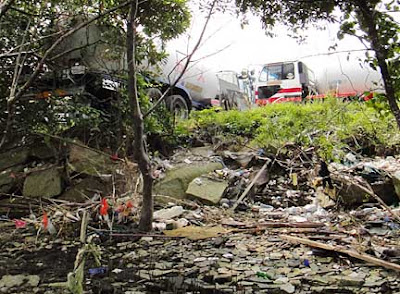 The trash line in some parts extends among the mangrove trees. 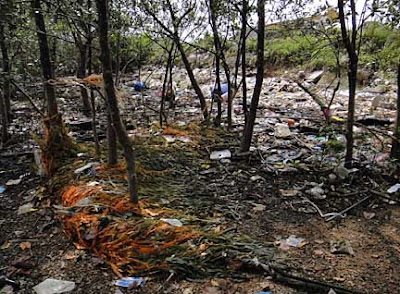 Fortunately, in other parts, the trash seems confined to the high shore. On the low shore, there isn't much. 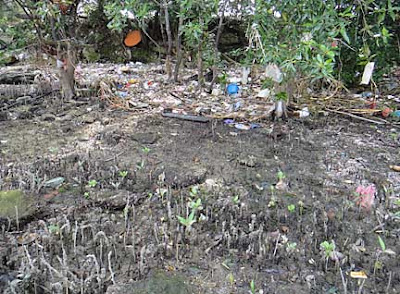 Some parts of the high shore was miraculously free of trash! 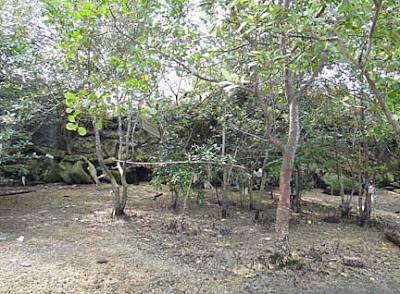 One stretch of the shore is covered thickly with broken tiles. 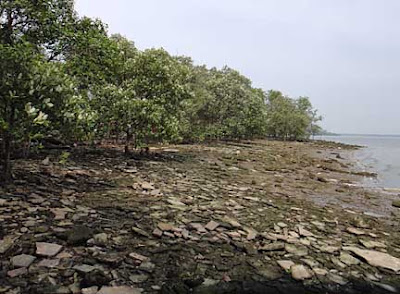 Despite the tiles, some mangrove trees are still growing here, though not as many as in the parts without the tiles. 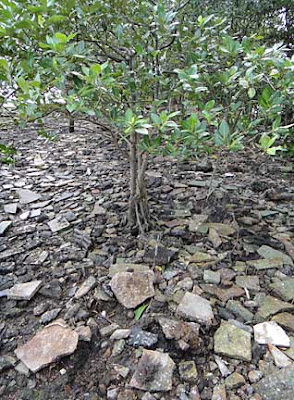 There are shelters built among the mangrove trees. 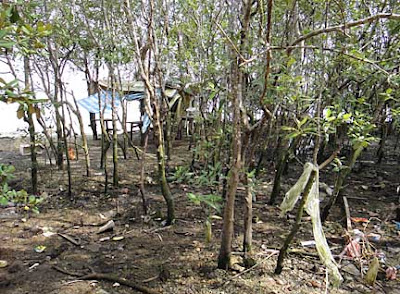 A closer look at this shelter. 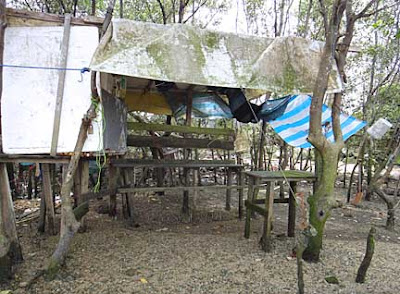 Another structure was much more elaborate, complete with a 'path' made of tiles leading out to the low shore. There were several overturned small boats and kayaks hoisted on stands or stuck into trees. 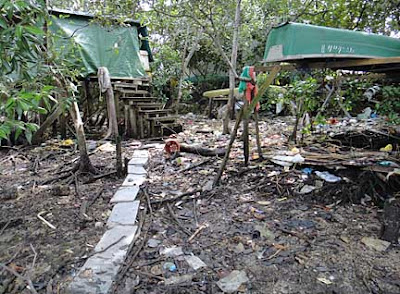 A man was in deep water throwing a cast net throughout my short trip there. 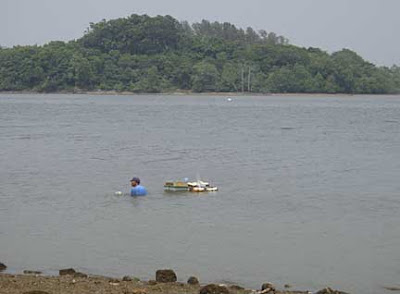 Behind the man are the mangroves and forested area near Kranji Nature Trail.
Posted by Ria Tan at 8:55 PM