There is an intriguing sliver of rocks that stick out above the water every time we make a trip to Sisters or St. John's. We had fantasies about visiting it for a long time. 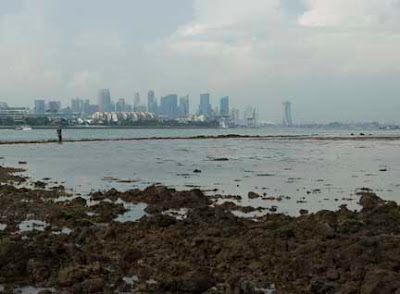 And yesterday, we finally did it! 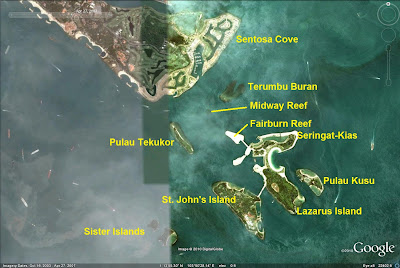 The main worry about landing at Terumbu Buran is the ferocious currents that swirl around it. In some parts of this area, the currents practically form whirlpools! 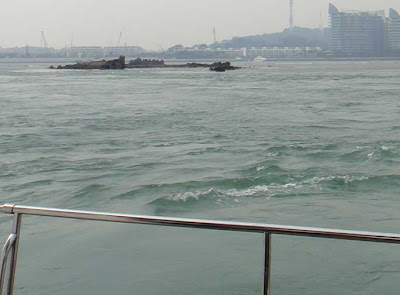 We took a while to find a safe place to anchor. Then it's time for the first team to head out the reef. It was quite unnerving to get into the tiny little dinghy in the middle of the surging currents. 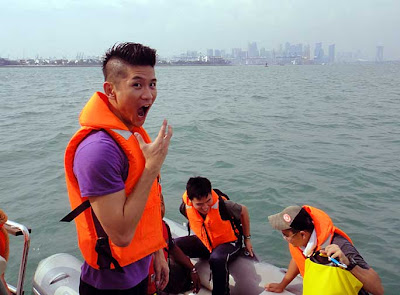 A last wave as they are off! Thank goodness for Jumari, the supreme seaman, who always manages to find a way for us to get to some of the craziest shores! 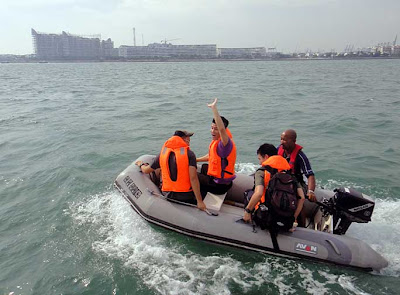 Terumbu Buran is a long way from the safe anchor spot. It took a while, but everyone managed to make safe landing! 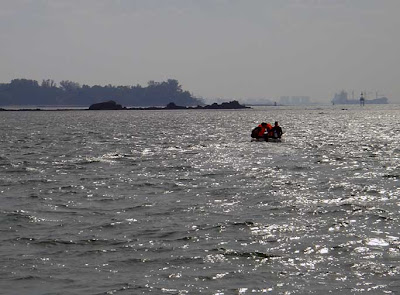 Buran has huge rocks. They are teeming with crabs of all kinds, and were less shy of humans than on other shores. Kok Sheng documented quite a variety. There were lots of Red-eyed reef crab (Eriphia ferox) and this pair seemed about to be mating when I accidentally came across them. 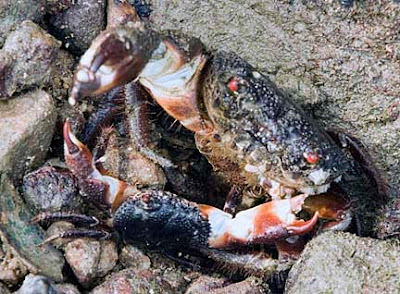 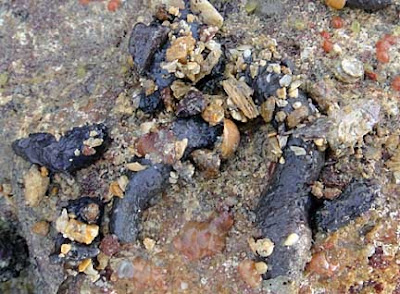 Some parts of the reef are exposed and here's Russel taking pictures of them. There was a stiff breeze so the water surface was rippled and it was hard to shoot through the water. Since everyone was thoroughly exploring the rocks, I gave up the big cam and decided to wander the deeper clear waters of the lagoon on the reef with my new swimming camera. I wandered in many places in water above my knees. 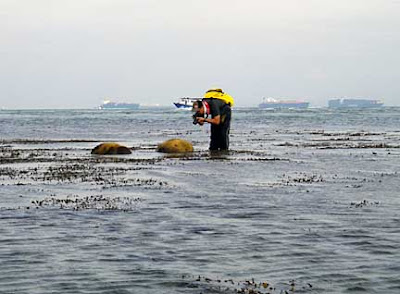 It's a lovely wonderland under the water! 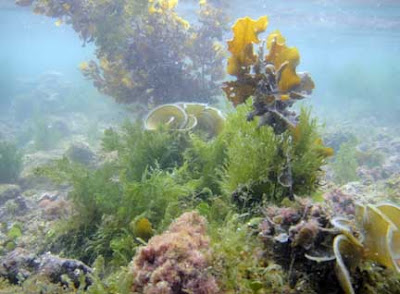 There were many colonies of leathery soft corals (Family Alcyoniidae). When out of water, these remind me of omelettes, but underwater, they are nicely ruffled. 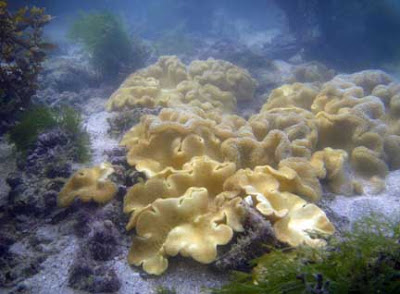 It's nice to see this leathery coral underwater. When out of water they look rather sad. Now all 'upright' and fluffed up, they look like tiny baby hands. OK, a bit creepy. 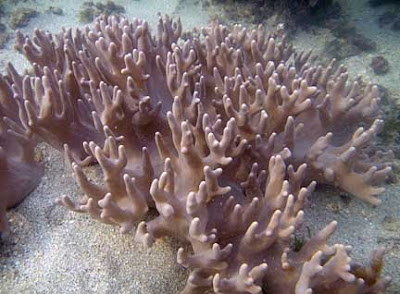 There is a bloom of Sargassum seaweed (Sargassum sp) on the shore, as is normal this time of the year. It's important to watch where we step in this floating carpet as there are things under it. There were many large boulder Pore corals (Porites sp.) on the shore. I was also careful as there may stonefish and stingray under the carpet. Indeed, November saw a stingray! 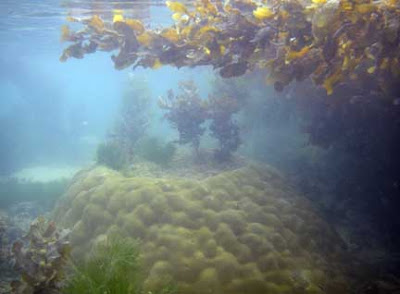 There were many colonies of healthy corals, but I didn't see a wide variety. I suspect they are in deeper water. We probably would have seen more if we visited at a lower tide. I saw one Flowery disk coral (Turbinaria sp.) and one plate forming Montipora coral (Montipora sp.). 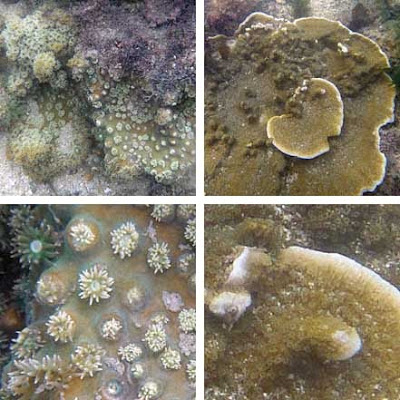 There were many Goniopora corals (Goniopora sp.) with tiny polyps, and a few Favid corals (Family Faviidae). 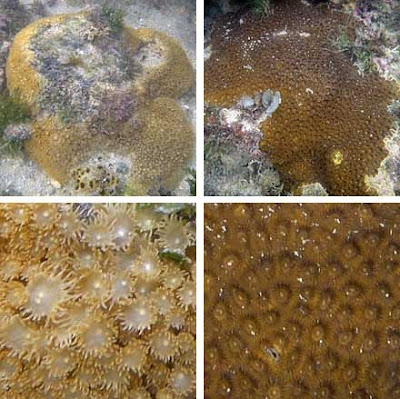 There were lots of zoanthids or colonial anemones (Family Zoanthidae) on the rocky shore.

The usual variety of sponges are found, and most seem to be in good health. 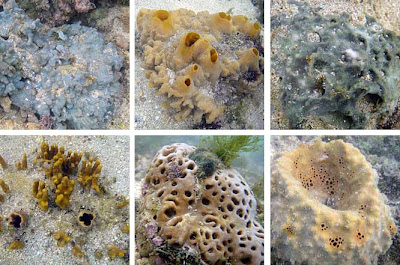 Among this melted chocolate sponge (Chondrilla australiensis), I noticed tiny things that look like sea anemones. Kok Sheng and the others also saw lots of other kinds of anemones.

There were all kinds of colourful encrustations on the rather rocky reef flat. 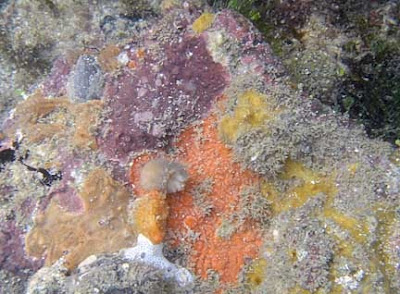 Clumps of Halymenia red seaweed (Halymenia sp.) add a dash of colour to the shores. 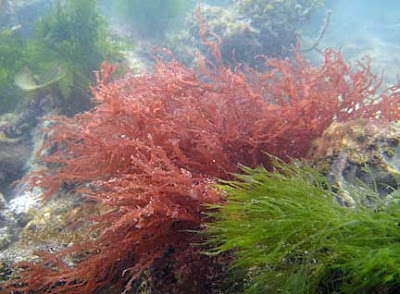 There was a good variety of seaweeds there too. 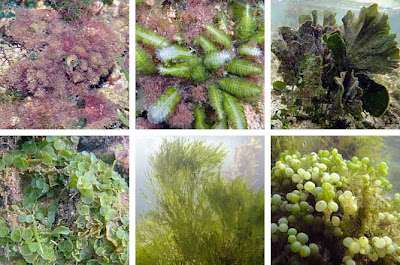 A live scallop (Family Pectinidae)! I'm quite impressed with new swimming camera. It gets great shots even when I am blindly shooting through ripply water.

I came across a Reef murex (Chicoreus torrefactus) and one cowrie (Family Cypraeidae). I didn't really do a good job spotting interesting things. But the rest of the team saw octopus, a tuskfish, an anemonefish and Chay Hoon of course spotted a tiny slug.

Sadly, there are still signs of coral bleaching on this shore. I saw many leathery corals that were still totally white or glowing yellow. 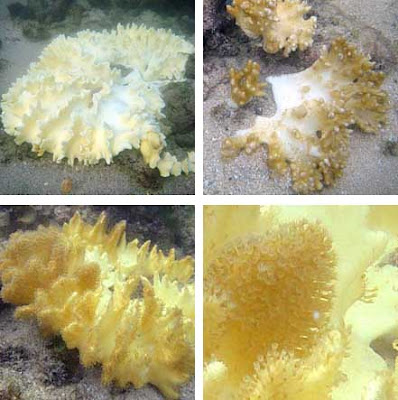 Some of the Pore corals (Porites sp.) still had white spots, and I even saw some recently dead corals, like the Galaxy coral (Galaxea sp.) on the right.

Oh dear, I'm not sure what is happening to this smooth blue sponge (Lendenfeldia cf. chondrodes). The edges of the sponge doesn't look normal. 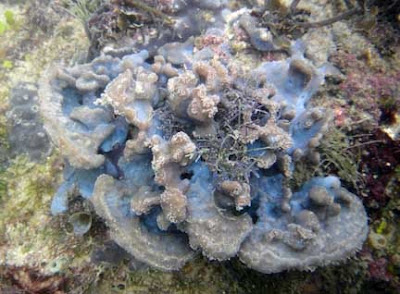 Hopefully, this is just the tail end of coral bleaching and that the shore will soon return to normal.

Soon the tide turned, sun setting and it's time to go home. 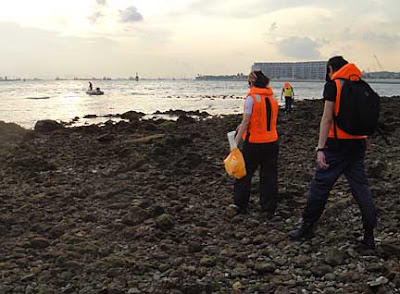 While I take the second trip back to the boat, the last batch are still busy checking out the shore. 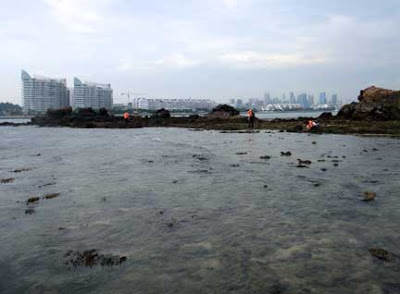 Isn't that awesome! A living reef right at the city's doorstep!!

Others who posted about this trip