Bleaching at the terumbus near Semakau

Today, we visit two reefs on the same low tide! At Terumbu Bemban, there are parts of the shore which are more 'reefy'. 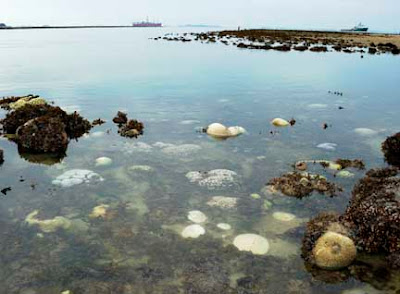 Alas, the bleaching is quite obvious here.

In some areas, almost all the hard corals are bleaching. 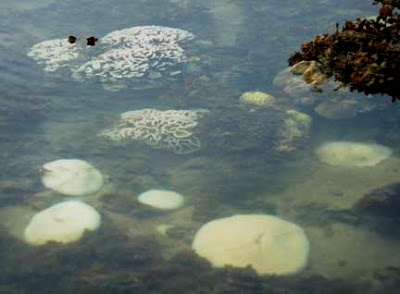 But not all the hard corals are bleaching. We estimate about 60% are badly bleached on Terumbu Bemban and Terumbu Semakau. 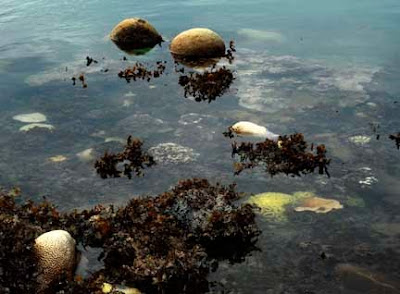 A closer look at bleached and unbleached corals. 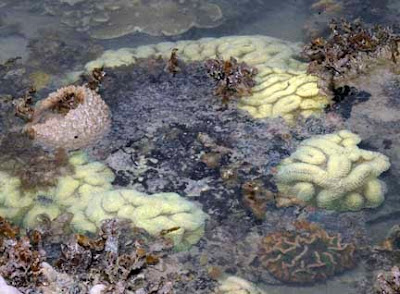 Terumbu Semakau lies just across from Pulau Bukom and the Semakau Landfill. And bleaching is also obvious here. 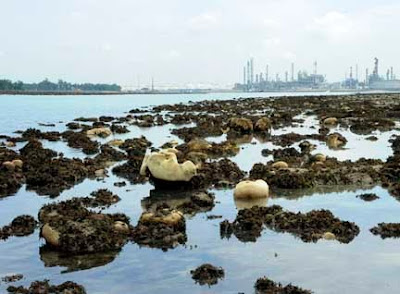 This part of Pulau Semakau is where mangroves were replanted, and corals have regenerated. It seems there is a great deal of bleaching going on at this Pulau Semakau shore too.

I notice that the Sargassum seaweed seems to be starting to grow again. In a bloom of Sargassum, the reefs are covered with a thick carpet of long leafy seaweed. Will these help to shade the corals and help ease the bleaching situation? 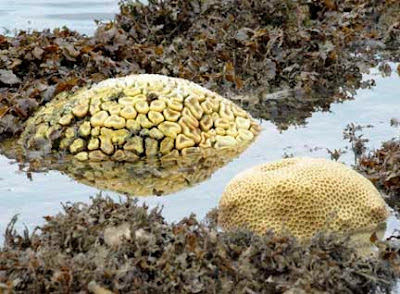 But not all the hard corals on the reef edge of Terumbu Semakau are bleached. 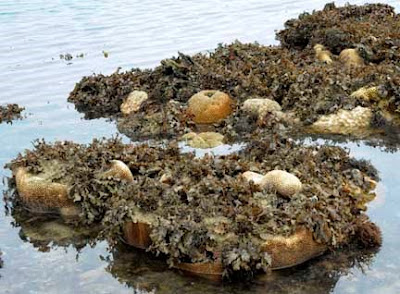 In the middle of the reef where it is probably regularly exposed, there are also hard corals which are not bleaching. Like this very large colony of Favid coral (Family Faviidae). 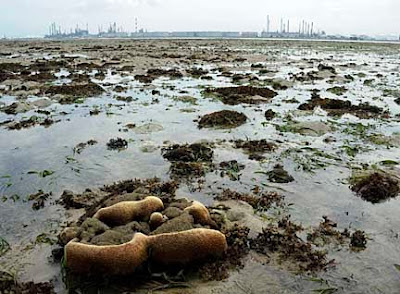 A whole patch of branching Montipora hard corals (Montipora sp.) in the middle of Terumbu Semakau is not bleaching! 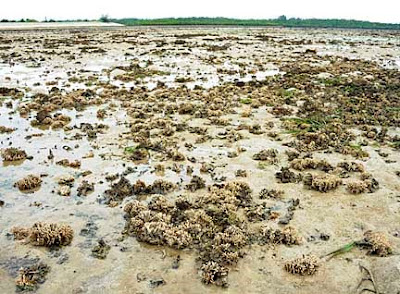 A closer look at these tough hard corals.

Similar hard corals on Terumbu Bemban was also not bleached. 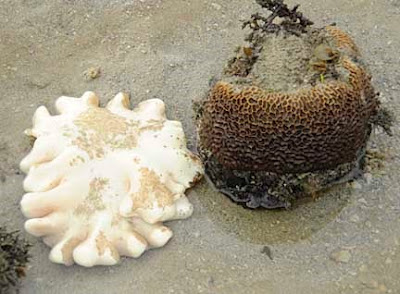 Some leathery soft corals are producing a lot of slime. 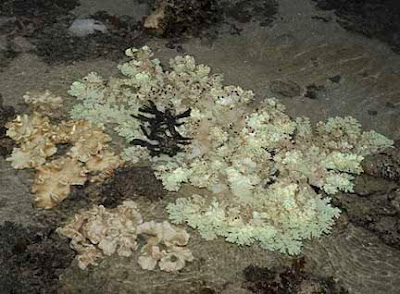 A closer look at the slime. 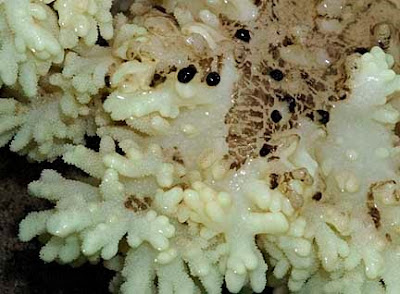 This leathery soft coral looks like it starting to rot! 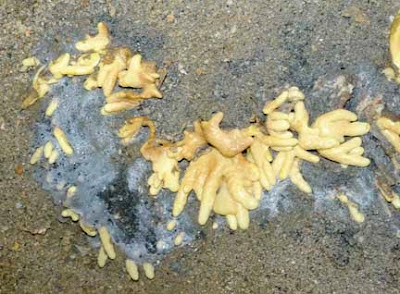 But not all the large leathery corals are bleached. I did see some that were still normal. 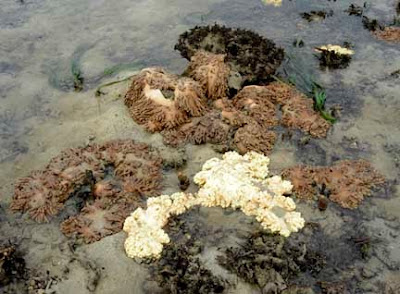 Most of the flowery soft corals (Family Nephtheidae) I saw were bleached. 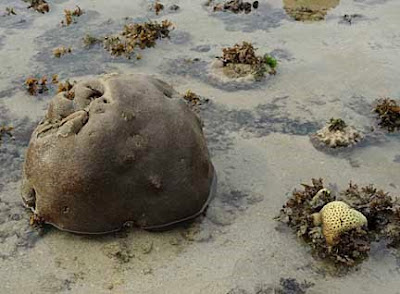 Two equal sized hard corals: one is bleaching, another is not. 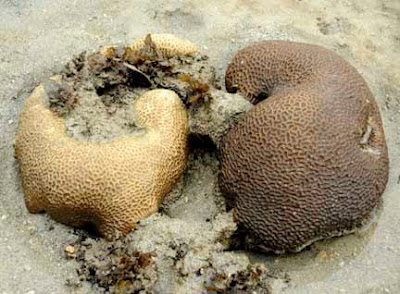 Some mushroom corals (Family Fungiidae) that I saw were completely bleached.

Other mushroom corals I saw were not bleached. 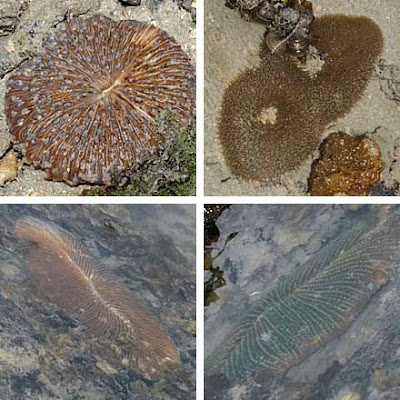 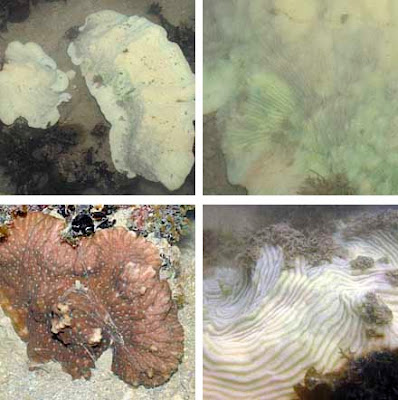 There was a pretty Lettuce coral (Pavona sp.) which looks paler than usual.

One Galaxy coral (Galaxea sp.) I saw was bleached, another was not.

Near one another, one Carnation coral (Pectinia sp.) was bleached, another was not. 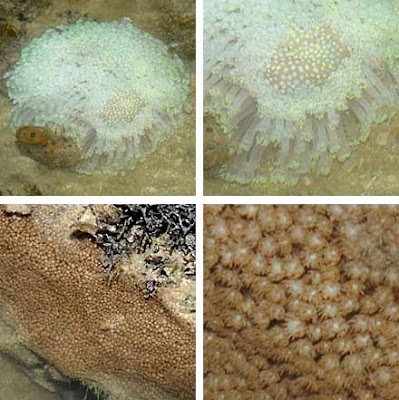 Some disk corals (Turbinaria sp.) I saw were bleached or bleaching while others seemed normal.

Many of the Brain corals (Family Mussidae) were also either completely bleached or bright yellow.

I saw only two Acropora corals (Acropora sp.) and they were both bleached. 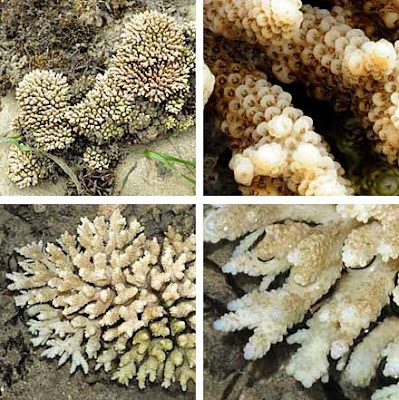 The only Pebble coral (Astreopora sp.) colony I saw was also bleached.

The Sandpaper corals (Psammocora sp.) were also not doing well. I did not see a single unbleached colony of these corals.

Some Favid corals (Family Faviidae) were bleaching while others were not. 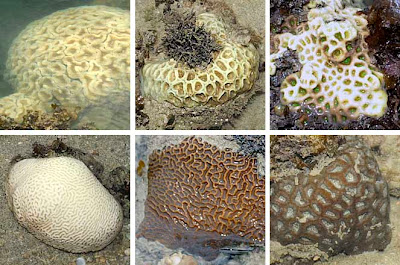 All the Cauliflower corals (Pocillopora sp.) that I saw were bleached. Most were still alive (first row of photos), but I saw one that seemed to have recently died (second row of photos). Oh dear. 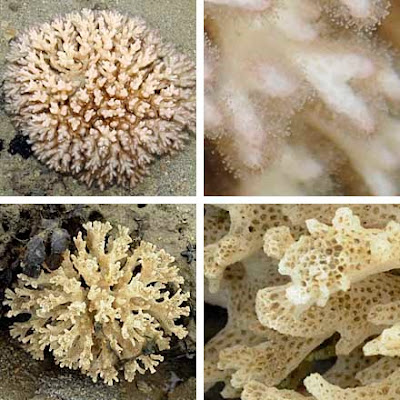 All the Euphyllid corals (Family Euphyllidae) I saw were bleached.

Blue corals (Heliopora coerulea) are not true hard corals and actually soft corals! Anyway, these living fossils are really tough and they seem quite normal today.

Let's hope the recent rainy weather will help cool the sea so that our corals will not be stressed. More about coral bleaching on Bleach Watch Singapore.

And more about what else we saw in this other post.
Posted by Ria Tan at 11:40 PM