There are many special mangrove trees being replanted at Pasir Ris Park! We decided to have a closer at them today. 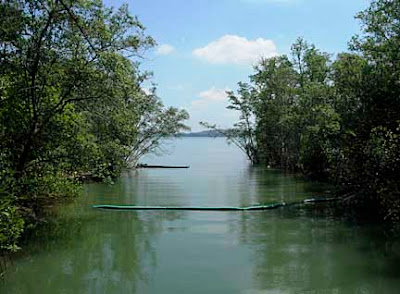 It was a lovely blue sky day! And for once, I didn't see any litter at the floating booms installed on the streams in the Park to trap these.

Before sharing about the plants, here's some of the fascinating mangrove animals we saw.

Just as we started, a very enthusiastic visitor pointed out a monitor lizard (Varanus salvator) that was swimming in the water. It was a young one, with a lovely pattern that reminds me of little flowers in beaded friendship bands. When they swim, monitor lizards place their limbs against their body and use their tails to propel themselves along. 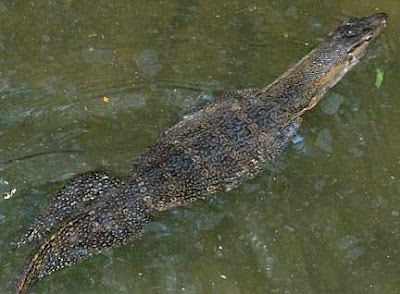 Later on, we saw a young monitor lizard on a mangrove tree! 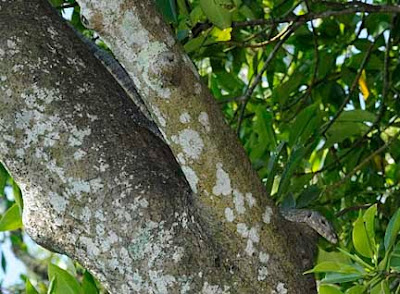 What a lovely surprise to see a Dog-faced water snake (Cerberus rynchops) out and about in broad daylight! These snakes are usually more active at night. I recall how some of us were helping Sijie at Pasir Ris with his study of how these snakes feed. We would wait and wait with zero snake sightings. Then just after sunset, lots of snakes suddenly appear everywhere.

But today we saw one swimming. Also coiled about the tree branches in the water. I'm not sure if these are all the same snake or different ones. These snakes have protruding eyes that are near the top of the head so they can look out above the water surface while the rest of their bod 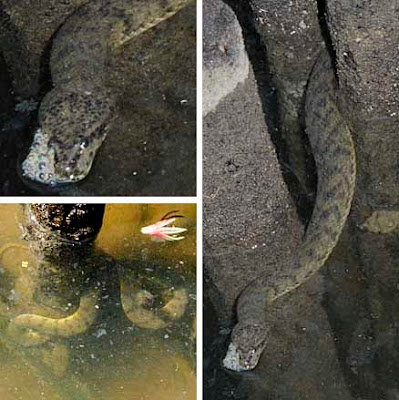 On the mudflats, there were tiny little mudskippers, and some face-banded crabs (Perisesarma sp.).

How nice to see these fiddler crabs in the mangroves. We have seen similar ones at Sungei Buloh and Chek Jawa. This is my first time seeing them at Pasir Ris. 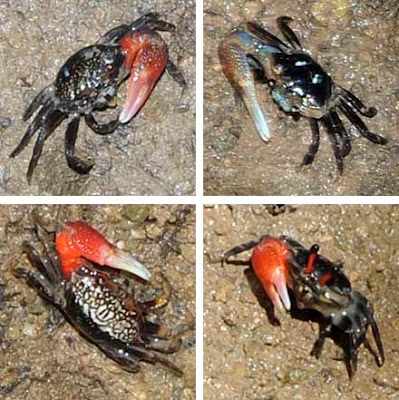 Chay Hoon spotted this Myna with a gecko in its bill. I'm not sure whether it caught the gecko or simply picked up one that was already dead. 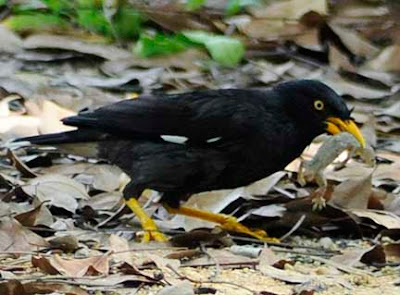 But the main focus of the trip was to check out the many special mangrove plants at Pasir Ris Park. The Berembang trees planted in a pond are very tall now! 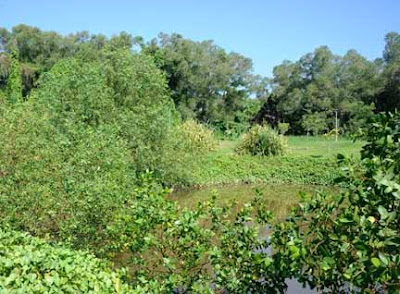 Berembang (Sonneratia caseolaris) have 'weeping' drooping branches. And conical breathing roots like other Sonneratia. This tree is listed as 'Critically Endangered' in the Red List of threatened Singapore plants. There are only a few naturally occurring trees of this species in Singapore. 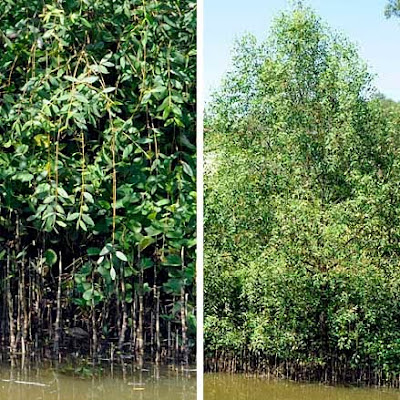 There are few Berembang flowers today, although there are clumps of white stamens floating in the pond. The photo of this flower far away shows the skinny red petals that characterise this species. There were lots of Atlas moth pupae hanging among the trees!

Among the breathing roots, there are little mangrove seedlings. I wonder what kind of trees these will grow up to be? 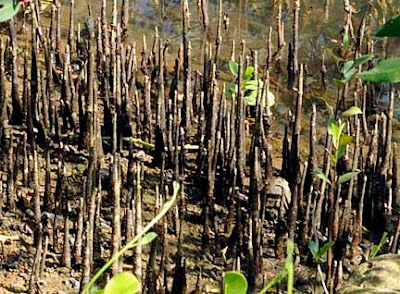 At the boardwalk, the Tumu berau (Bruguiera sexangula) that I saw in flower in January has formed propagules! This species is also listed as 'Critically Endangered' and there are very few naturally occurring trees in Singapore.

Nearby, there are several small Gedabu (Sonneratia ovata) trees. But only one has flower buds. Later on, we saw lots of other Gedabu trees planted elsewhere in the park. Previously common in our back mangroves, Gedabu is now listed as 'Critically Endangered' with few naturally occurring trees in Singapore.

There's a little nursery in the Park with lots of small plants still in their plastic bags. 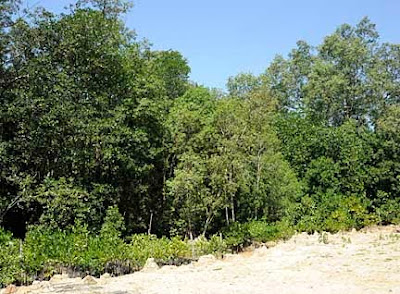 Many larger plants have been planted out. 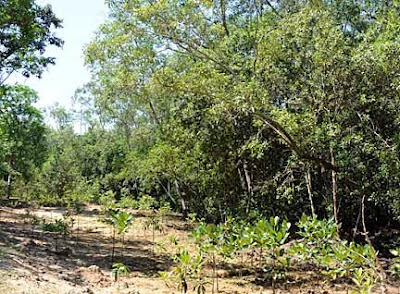 Among them was one that I think looks like the rare Dungun air (Brownlowia tersa)! It is listed as 'Endangered' and I don't see this mangrove understorey plant very often in the wild.

This plant looks like it might be Riang riang (Ploiarium alternifolium)! If it is, it would look lovely when it blooms! I've never seen this plant before. 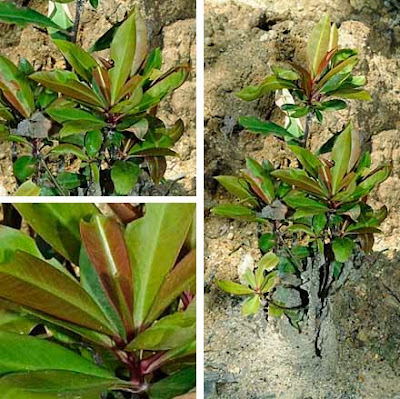 There were also several tall shrubs/short trees of this plant. I still have no idea what it is. I saw it bloom on an earlier trip, with lots of little white fluffy flowers. Now it has lots of little round pink fruits! 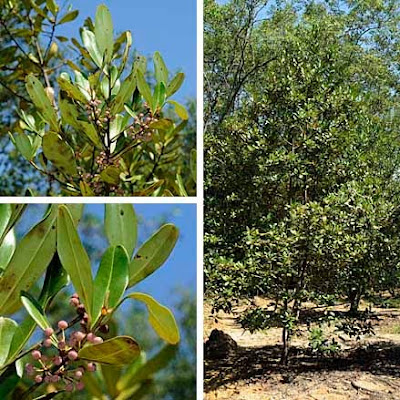 Among the young plants we saw some that might be the Mangrove trumpet tree (Dolichandrone spathacea).

It was a very hot day, and has been for a while. Many mangrove trees get rid of salt by depositing it on their leaves. In hot, dry weather, the salt crystals are more easily seen, such as these on the leaf of Api api putih (Avicennia alba).

In some parts of the mangroves, leaves of all kinds of species are covered in a fine black smutty substance. This patch of Common derris (Derris trifoliata) is in full bloom, despite or perhaps because of the black stuff. I have often heard that plants flower and fruit when they are stressed and about to die. 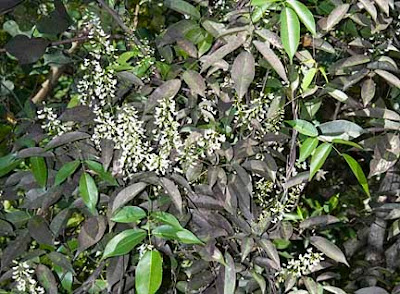 The highlight of the trip is a lovely, naturally occuring Lenggadai (Bruguiera parviflora). Like the one at Chek Jawa that I recently saw, this one was also blooming profusely. And there were even some developing propagules! This tree is listed as 'Endangered'. 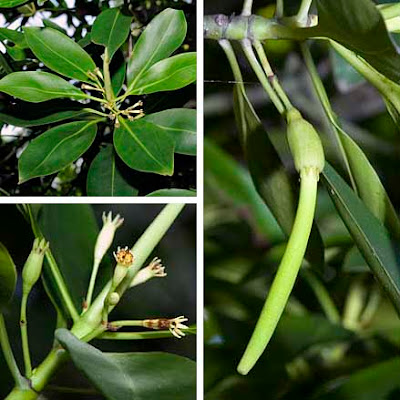 It's possible to get real close to the tree here (unlike at Chek Jawa), so I could take a closer look at the tiny petals on the these tubular flowers. Like most of the other Bruguiera species, there are tassels at the tips of the petals. Although in the Lenggadai, the petals are very short indeed. One flower had attracted a small ant!

Pasir Ris Park mangroves is a haven for some of our most precious and special mangroves!

To celebrate Earth Day, a series of special events are planned at Pasir Ris on 22-24 Apr, including a free public guided tour along the boardwalk on 22 Apr.

At other times, the public guided walk along the Pasir Ris boardwalk is held every third saturday of the month. The tour is suitable for kids!

You can also explore the boardwalk on your own as there are lots of very information and interesting signboards along the way. Here's a post about my first time to the boardwalk when it reopened.

More about Pasir Ris Park on wildsingapore and on the NParks website.
Posted by Ria Tan at 7:57 PM