Mangroves of the world and Singapore

More than one in six mangrove species worldwide are in danger of extinction.

Mangroves of Pulau Semakau with petrochemical plants of Pulau Bukom nearby.
The study warned that current rate of mangrove loss is so high that mangrove forests may functionally disappear in as little as 100 years.

How do Singapore mangroves fare in this latest global survey of mangroves? Does mangrove replanting work?

Thanks to Dr John Yong for sharing about this latest paper: The Loss of Species: Mangrove Extinction Risk and Geographic Areas of Global Concern by Beth A. Polidoro et al. Also thanks to his contributions to the paper, Singapore is represented in this global assessment of mangroves.

What's the status of mangroves species globally?
11 out of 70 mangrove species (16 percent) are now the IUCN Red List. Several species at high risk of extinction may disappear well before the next decade if existing protective measures are not enforced.

What is the situation is our part of the world?
According to the study: "Globally, mangrove biodiversity is highest in the Indo-Malay Philippine Archipelago, with between 36 and 46 of the 70 known mangrove species occurring in this region.

Although less than 15% of species present in this region are in threatened categories, the Indo-Malay Philippine Archipelago has one of the highest rates of mangrove area loss globally, with an estimated 30% reduction in mangrove area since 1980.

Mangroves in this region are primarily threatened by clearing for the creation of shrimp and fish ponds, for example, approximately half of the 279,000 ha of mangroves in the Philippines lost from 1951 to 1988 were developed into fish/shrimp culture ponds."

What are the most threatened mangrove species globally? Are they found in Singapore? According to the study, at least two mangrove species are at high risk of extinction and may disappear within the next decade if protective measures are not enforced.

One of them is Bruguiera hainesii! Singapore has a few trees of this very rare species! 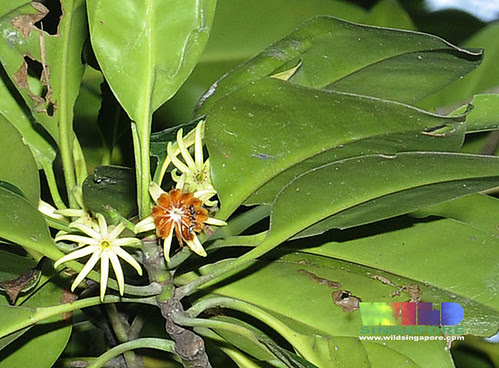 Bruguiera hainesii at Pulau Ubin.
According to the study: "Bruguiera hainesii is only known from a few fragmented locations in Indonesia, Malaysia, Thailand, Myanmar, Singapore and Papua New Guinea. It has very low rates of propagation and low rates of germination. It is estimated that there are less than 250 mature individuals remaining. For these species, urgent protection is needed for remaining individuals as well as research to determine minimum viable population size.

The other rare species is Sonneratia griffithii "which is distributed in parts of India and southeast Asia, where a combined 80% loss of all mangrove area has occurred within its patchy range over the past 60 years, with significant losses in Malaysia, primarily due to the clearing of mangrove areas for rice farming, shrimp aquaculture, and coastal development. This species is already reported to be locally extinct in a number of areas within its range, and less than 500 mature individuals are known from India."

Singapore also has two globally Near Threatened species, Sonneratia ovata and Brownlowia tersa, that "are common throughout their relatively wide range, but have experienced severe loss at their range margins". 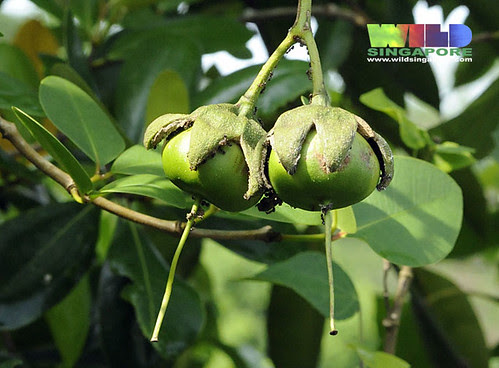 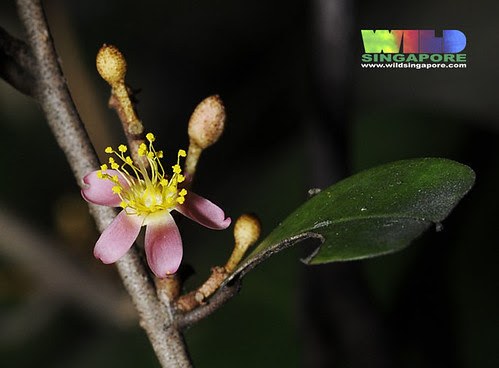 Brownlowia tersa growing at Woodlands.
In addition, some species that not considered threatened may become so as sea levels rise. These are species found on the landward side of mangroves but which cannot 'move' further inland as they are blocked by urban or land development. The species likely to be affected in this way include some found in Singapore such as: Brownlowia tersa, Bruguiera sexangula, Nypa fruticans, Lumnitzera racemosa, Lumnitzera littorea, Sonneratia caseolaris and Xylocarpus granatum. 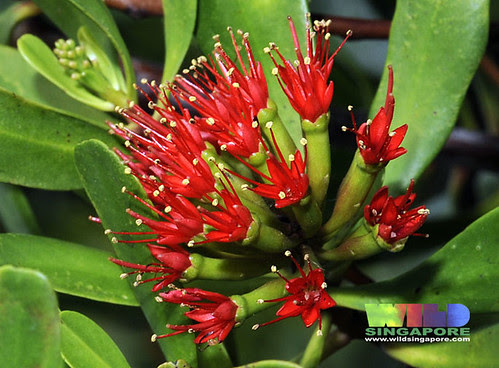 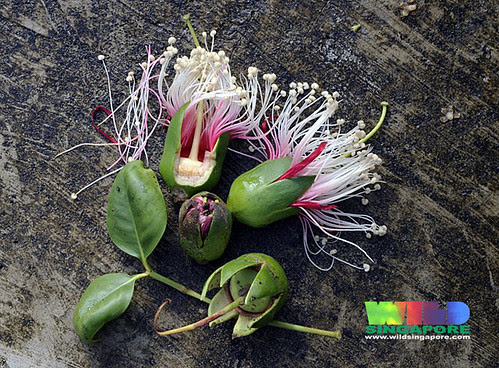 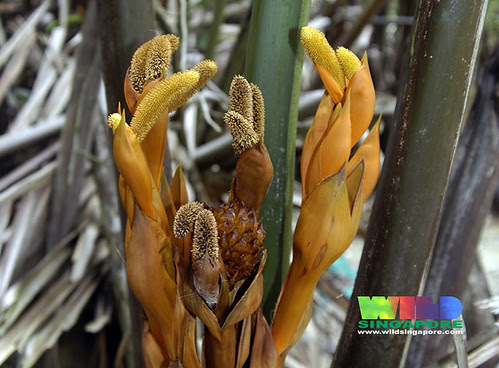 Nypa fruticans at Chek Jawa, Pulau Ubin.
Why are mangrove species important?
According to the study: The loss of individual mangrove species is of great concern because even pristine mangrove areas are species-poor compared with other tropical plant ecosystems.

The relatively small number of mangrove species worldwide occupy only 0.12% of the world’s total land area. Yet mangroves provide at least US$1.6 billion each year in ecosystem services. These include mitigation of damage caused by tsunami waves, erosion and storms, as a nursery for marinelife that support coastal livelihoods. It is estimated that almost 80% of global fish catches are directly or indirectly dependant on mangroves. In addition, they have a staggering ability to sequester carbon from the atmosphere, and serve as both a source and repository for nutrients and sediments for seagrass meadows and coral reefs.

What are the major threats to mangroves?
According to the study: The primary threats to all mangrove species are habitat destruction and removal of mangrove areas for conversion to aquaculture, agriculture, urban and coastal development, and overexploitation. Of these, clear-felling, aquaculture and overexploitation of fisheries in mangroves are expected to be the greatest threats to mangrove species over the next 10–15 years.

With almost half (44%) of the world’s population living within 150 km of a coastline, heavily populated coastal zones have spurred the widespread clearing of mangroves for coastal development, aquaculture, or resource use. At least 40% of the animal species that are restricted to mangrove habitat and have previously been assessed to be at high risk of extinction due to extensive habitat loss. It is estimated that 26% of mangrove forests worldwide are degraded due to over-exploitation for fuelwood and timber production. Similarly, clearing of mangroves for shrimp culture contributes 38% of global mangrove loss, with other aquaculture accounting for another 14%.

Are mangroves well protected?
According to the study: The current trend of global decline of mangrove area indicates that exploitation continues unabated despite the presence of laws and treaties (such as RAMSAR and CITES).

Mangrove areas and species of concern are generally not adequately represented within protected areas. There is a need to acquire and protect privately-owned parcels of coastal land, especially those that contain viable populations of threatened mangrove species. National legislation and management plans are in place in some countries, but enforcement and further planning are required to protect individual species that may be locally uncommon or threatened, as well as to protect the entire mangrove areas and important ecosystem functions.

Does mangrove replanting work?
According to the study: "Although regeneration of degraded mangrove areas is thought to be a viable option in some areas, successful regeneration is generally only achieved by the planting of monocultures of fast-growing species, such as Rhizophora or Avicenna species. Many rare and slow growing species are not replaced, and many species cannot be easily replanted with success. In sum, mangrove areas may be able to be rehabilitated in some regions, but species and ecosystems cannot be effectively restored."

The study appears in the scientific journal PLoS ONE. It was carried out by the Global Marine Species Assessment Unit (GMSA), which is part of the Biodiversity Assessment Unit, a joint initiative of IUCN and Conservation International, together with the world’s leading mangrove experts.

Update: See this Straits Times article by Grace Chua for more about the Bruguiera hainesii and efforts to protect it and our mangroves - Mangroves may vanish in 100 years World's mangrove species are threatened by rising sea levels and coastal developments by Grace Chua Straits Times 14 Apr 10;