Return to Sisters with Dr Dan

We're back on the shores with Dr Dan and the Duke University students! This time at Big Sisters Island, for an unscheduled trip. 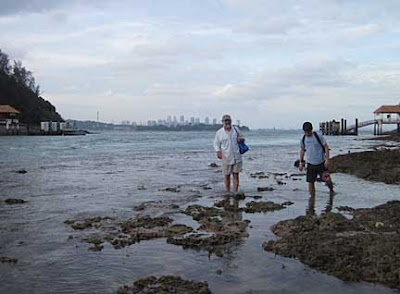 How delightful that they were sporting enough to join the regular team for our little documentation trip. And glad that Dr Dan could return to Sisters since his last trip in 2007.

It's tricky getting off at Sisters Island because the currents are very strong at the jetty. But we are all nimble and alert enough to make it to the shore alive! 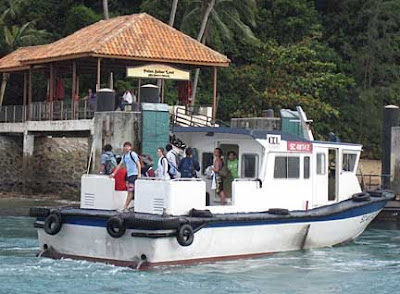 While the rest of the team explore the big lagoon, Dr Dan wants to check out the other side of Sisters. And he finds lots of Common sea stars (Archaster typicus) in the small lagoon! Wow! I don't remember seeing them on Big Sisters in such numbers before. And they were big, and some were busy in mating position. 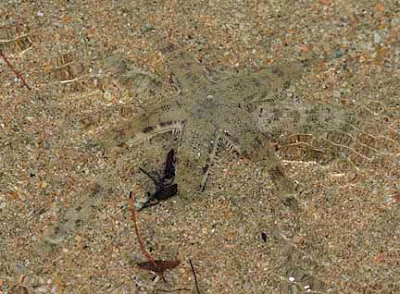 Dr Dan also spots lots of burrowing Moon snails, including this one that I seldom see. It has a spotted body (which alas it refused to show) and I've yet to discover its identity.

We also saw a Giant top shell snail (Trochus niloticus)! The intriguing tree I saw the last time was fruiting and had just bloomed. It looks like some kind of Syzygium but I'm not sure what kind. 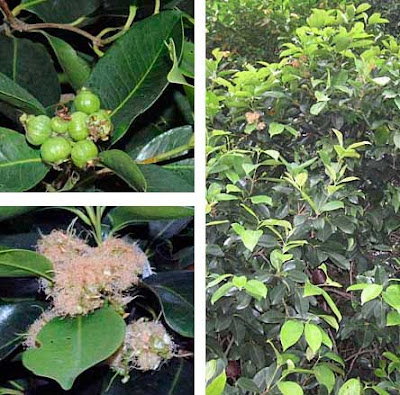 We hurried back to catch up with the others, and they were crowded around a 'constipated' Acorn worm (Class Enteropneusta) that was busy excreting coils of sand. Ooo...and eew! 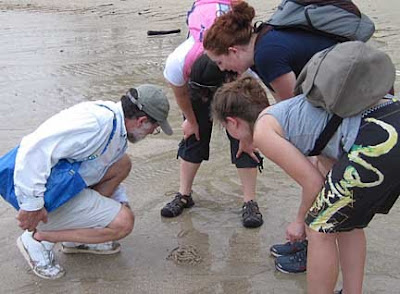 While everyone went about looking on their own, I headed out to the big lagoon. The Great-billed heron that we saw when we first arrived was still hunting there. It seems there were two of them, and James has a great shot of them having an argument! While Andy has a great video clip with one of them catching a fish. 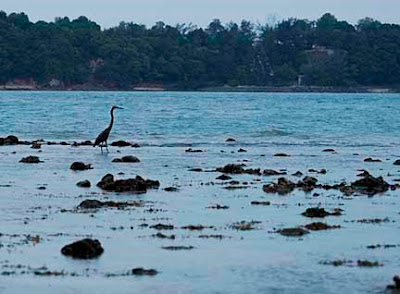 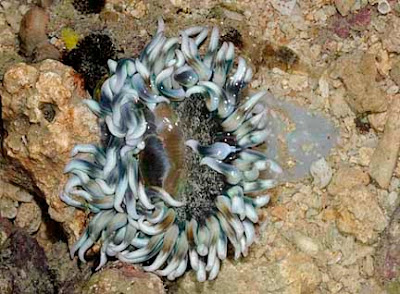 And among the Hairy seaweed (Bryopsis sp.) I saw this strange sea hare that I've never seen before. Chay Hoon suggests it might be Aplysia parvula. 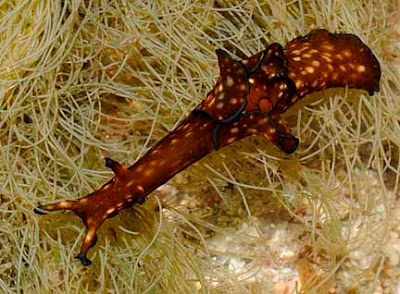 And James pointed out that there are tiny little eyes under the rhinophores (the second pair of pointy things on the head, the first pair are the oral tentacles). 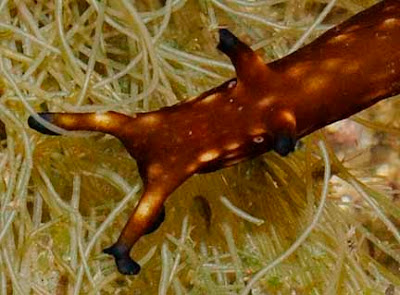 The big lagoon usually has lots of different kinds of special hard corals. And especially mushroom corals (Family Fungiidae). This was the only one I saw, but Brandon came across a patch with many of them. 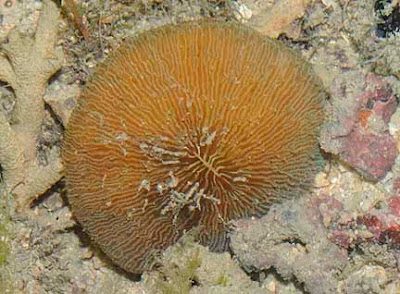 Alas, the big patch of corals near the sea wall seems to have been buried. And Chay Hoon says the large group of Anemone corals (Goniopora sp.) wasn't doing well. We get the feeling that the sandy bottom of the lagoon is much higher. Perhaps the hard corals are getting buried?

But it was nice to see many of these thickly branched Acropora corals (Acropora sp.). 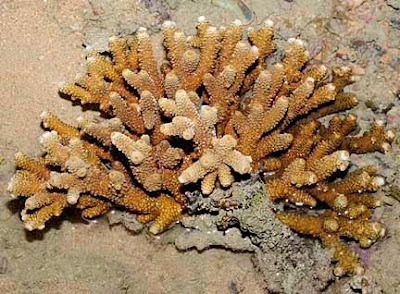 Rob found a little green shrimp with fine white lines hiding among the branches. I've seen one of these at Sentosa before, also in an Acropora coral. It's hard to take a good photo of it. 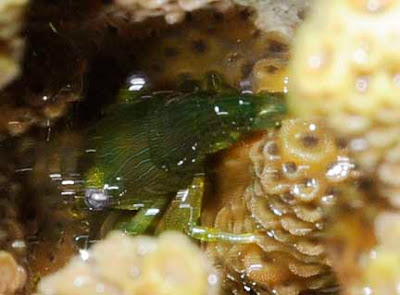 Other animals living among the branches include tiny little clams. And around the coral are little shrimps and fishes including this Head-stripe goby (Amblygobious stethophthalmus) which is very common in this lagoon. 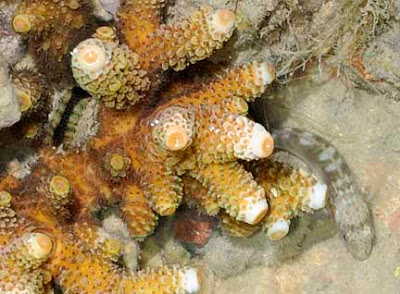 I also came across this little fish. I'm not sure what it is. Perhaps some kind of Wrasse (Family Labridae). 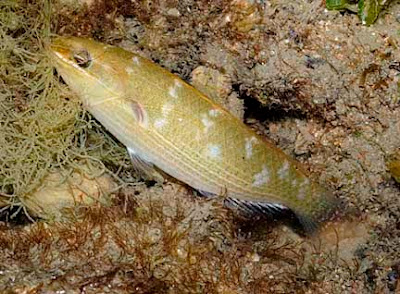 As the tide came in and I headed up the silty upper shore, I saw this pretty little fan worm. 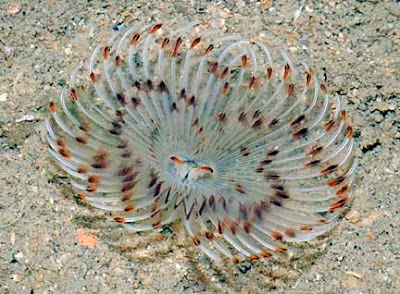 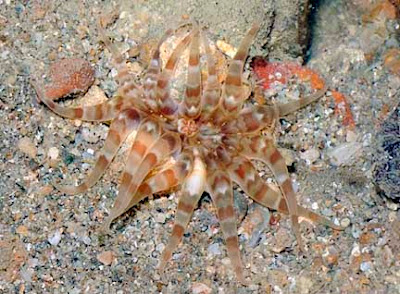 As well as a very VERY fast moving flatworm that looks just like the sandy surface! 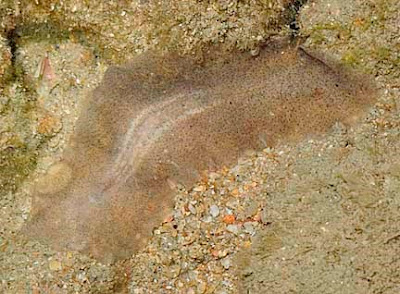 We looked for the Fluted giant clam (Tridacna squamosa) that I've seen before but we failed (again) to find it. We also couldn't find the smaller Fluted giant clam. Although the sargassum bloom is over, the tide wasn't very low so perhaps it was in slightly deeper water. We hope.

There were at least three people out and about fishing on the reef edge. 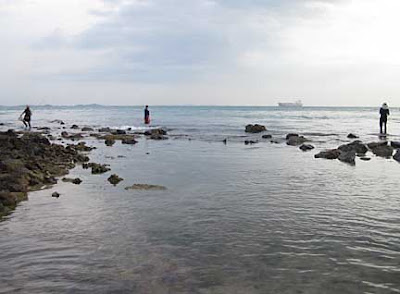 Rob found several little brittle stars! They are very cute when you take a closer look at them. 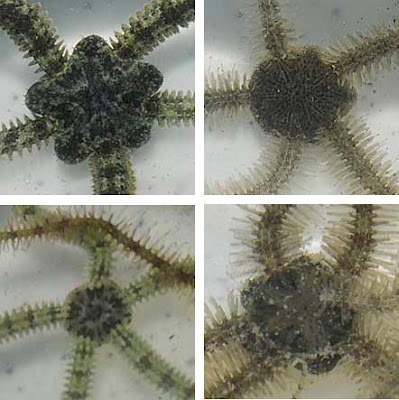 I'm looking forward to the upcoming talk by Dr. Fujita to learn more about these animals!