Will there be dolphins at Resorts World Sentosa?

I was reminded about Resorts World Sentosa's plans for captive dolphins when I read this article today about how a captive dolphin gave birth while performing in a Vietnam aquarium. 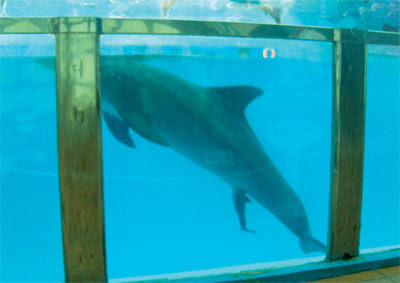 The tail of a baby dolphin can be seen coming out of its 17-year-old mother Hindri in an aquarium at Suoi Tien on January 23 (Photo: SGGP)

The trainer said the pregnant dolphin was "showing signs of fatigue and didn’t want to perform in the morning". But it appears she was forced to perform anyway.

It would be sad if such cruelties took place in Singapore!

A 17-year-old dolphin named Hindri gave birth to her first calf while performing at the Suoi Tien Tourist Area in Ho Chi Minh City on January 23.

Jimmy Sukat, the dolphin’s Indonesian trainer, said Hindri was showing signs of fatigue and didn’t want to perform in the morning.

Around 3 pm, the tail of a baby dolphin was spotted coming out of Hindri and by 6 pm the calf was fully born, he said, adding that dolphins are usually pregnant for 13 months before giving birth.

As there are no veterinarians with dolphin expertise in Vietnam, the deputy director of Suoi Tien Tourist Area, Doan Minh Tuan, said he will invite experts from Indonesia to examine and care for Hindri and her baby.

Hindri is one of four performing dolphins imported from Indonesia to Suoi Tien. The animals began performing in January 2009.

The tourist area is situated 19km to the northeast of Ho Chi Minh City on the Hanoi Highway where visitors can enjoy natural landscapes including streams, woods and aquariums with hundreds of species of fish and rare animals.

So what's the situation with dolphins at Resorts World Sentosa?

In late 2008 and early 2009, there were media reports that wild caught dolphins from the Solomon Islands were transported to the Philippines for training and eventual transfer to Resorts World Sentosa. The last I picked up on this situation is that "The Philippines-owned CITES science team has just sent a letter to the government of Philippines that the import of the dolphins from Solomons earlier this year is NOT legal under Philippine law. There are now grounds to halt the re-export to Singapore as the legality is questioned." Here's the post with more links.

Earlier this month, WChinner of Langkawi posted on her Nature is Awesome blog about cages being set up at Awana Porto Malai, a resort there, ostensibly for an acclimatisation program for imported dolphins that would be eventually transferred to Singapore. Here's the post with more links.

Well at least we won't be having whale sharks at Sentosa. Or will we?

As of today, the Resorts World Sentosa's Marine Life Park webpage (subtitled "Opening after 2010") no longer has images of a whale shark in the tank. But it remains full of dolphins. 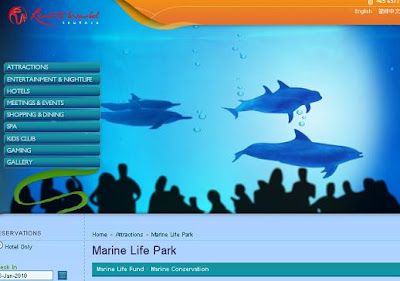 "Dive into the aquatic world and get a chance to interact with dolphins, snorkel with rays and come face to face with some of the ocean’s most fascinating creatures."

"Venture into a wading pool for some intimate interaction with reef fishes."

On Sentosa website however, whale sharks are still mentioned.

"See, touch and mingle with over 700,000 aquatic creatures at the Marine Life Park's magnificent oceanarium, which is also home to dolphins, whale sharks, tiger sharks and rays."

On its Marine Conservation page, Resorts World Sentosa gives the impression that its idea of "Taking Conservation Seriously" is to tickle a dolphin under the chin. 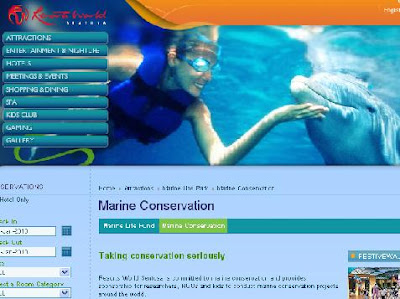 Resorts World Sentosa has under its "Coral Conservation" effort, a link to an old video clip on coral relocation done in Jul 2007 when construction first began. Here's an earlier post I did about this video when it came out in Jul 2008.

As far as I know, there has been no public update about the status of the 200 or so relocated corals. Did any of them survive?

One more article about the poor pregnant dolphin in Vietnam:

HCM CITY — A performing dolphin in the District 9’s Suoi Tien Cultural Park gave birth on Saturday afternoon after refusing to perform in the morning show.

The 17-year-old mother, Hindri, was already pregnant before she was brought to Viet Nam, Indonesian dolphin trainer Jimmy Sukat said.

Hindri was imported with three other dolphins from Indonesia last January to entertain the public at Suoi Tien Park.

According to witnesses, Hindri started to give birth at around 3pm, with the calf’s tail coming out first. Her labour finished three hours later.

The birth amazed and embarrassed trainers and staff at the park, who were not prepared for the birth of a dolphin calf.

It’s the first time Hindri has given birth and also the first time a dolphin has been born in captivity in the country, according to trainers at the park.

Experts will be invited from Indonesia to take care of the calf, which was named Suoi Tien after the park, according to Doan Minh Tuan, the park deputy general director. — VNS