The Long March to Pemphis

Thanks to Travis, I saw my first Pemphis on the mainland! 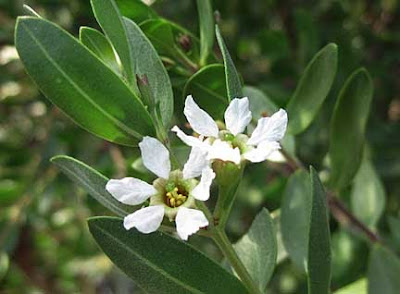 This rather delicate looking shrub is a very rare mangrove plant. I saw it during a very VERY VERY long walk along an isolated shore on the mainland. Yes, on the mainland!

I have often heard whispers about a mythical shore at Changi. When Travis kindly offered to take us to there, we took it up shamelessly and without hesitation. Ok, perhaps some hesitation because we heard the walk would be 10 (yes, TEN) kilometres long!

It starts innocently enough through tall grasslands, into shady groves of spindly trees. 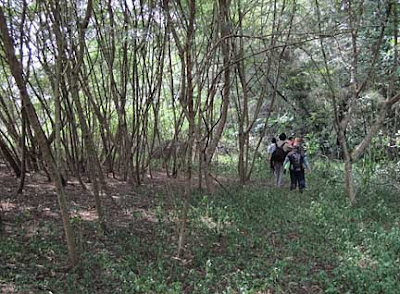 Up and down gentle slopes covered in well-behaved ground plants. Across intriguing streams and alongside mysterious ponds. 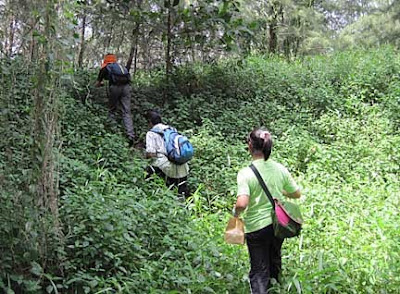 Through vast expanses of grasses of various shapes and colours. 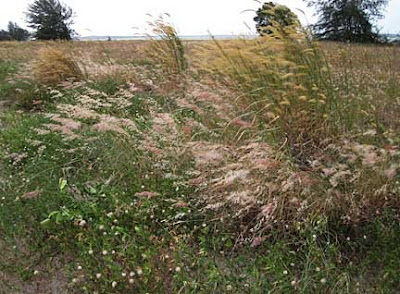 Of course our hearts' desire was the shores. Wow. We finally come onto the wide wide sandy scallops of bays and inlets on this vast shore under a blue blue sky. There was a fierce wind throughout our trip, kicking up lots of white-capped waves in the clear waters. 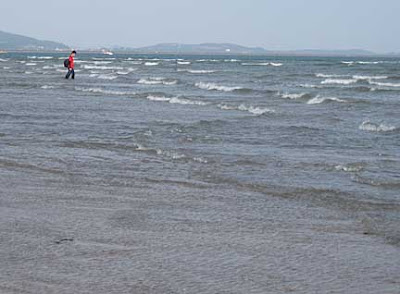 As we reached the first major water crossing, we switched to booties. The current in the shallow stream was quite strong! 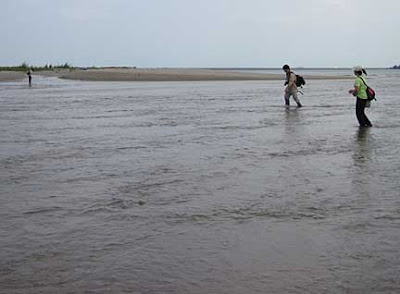 There were vast flats covered with tiny snails. 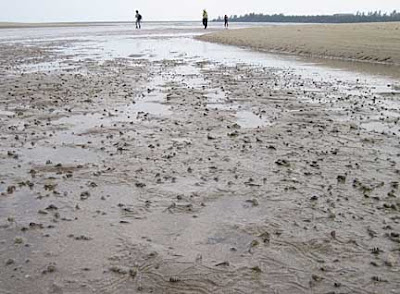 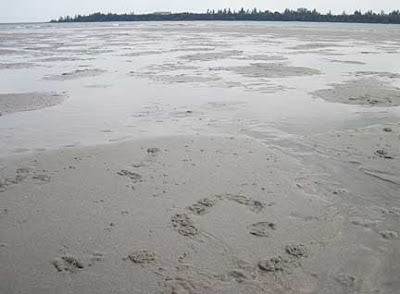 On the high shores, lots of tantalizing hints of a rich snail community somewhere out there in the water. The tide wasn't very low on our trip, so we had to be content with glimpses of some mid-water stretches. 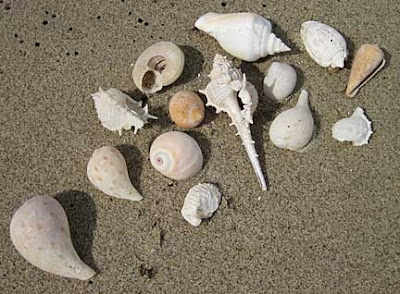 But of course, trust Kok Sheng to find a special snail even in such circumstances. Wow, a living Tun snail (Family Tonnidae)! I've never seen a live one before! 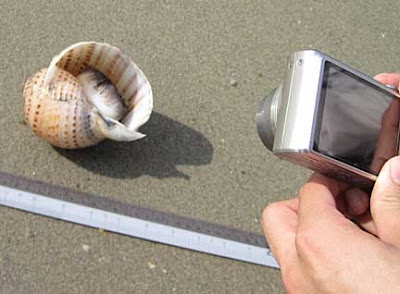 There were also flocks of shorebirds on the sand flats. 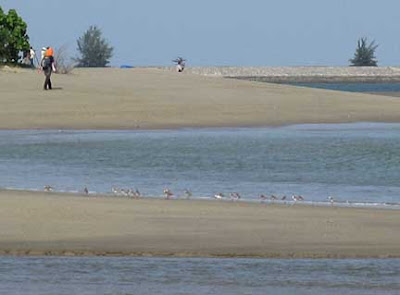 This is the best shot my feeble Sneaky camera could take. I'm not too sure what they are. Some kind of plover I think. 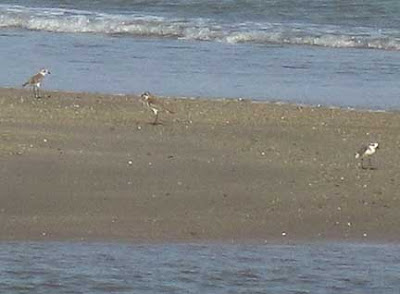 The team saw so many things, from echinoderms to snails, that we split up the blogging themes among us. See Kok Sheng's blog and Mei Lin's blog for lots of exciting finds.

And I get to blog about the plants we saw! There were lots of whispering Rhu trees (Casuarina equisetifolia) fringing the shore. Providing welcome shade. Many were fruiting too! 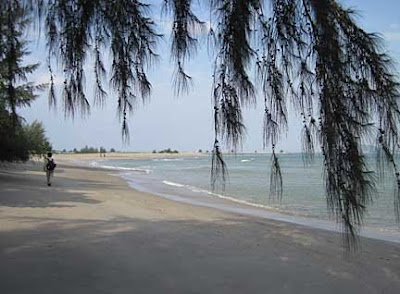 The shores were lined with the usual assortment of wild coastal plants. Young Sea almond trees (Terminalia catappa) adding a burst of red with their seasonal leaf drop. Large and handsome bunches of Seashore pandan (Pandanus tectorius). Huge mounds of Merambong (Scaevola taccada) with their plasticky green leaves and half-a-flowers. 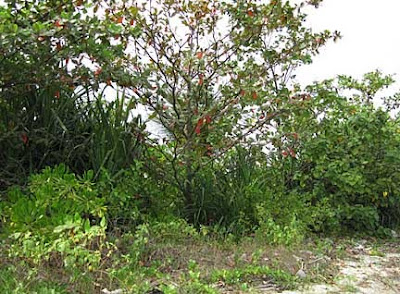 Another special find by Marcus was a wild Seashore spider lily (Crinum asiaticum)! My photo of it didn't come out too well.

While Chay Hoon found a mysterious plant in a mangrovey spot. We're not too sure what it is. [We now suspect it's a Common derris (Derris trifoliata)].

The sandy upper shores were cloaked in swathes of Seashore morning glory (Ipomea pes-caprea) with purple flowers and star-shaped exploded brown fruit capsules. Like yellow noodles on the ground and draped on other coastal plants, the semi-parasitic Rambut putri (Cassythia filiformis) with tiny white flowers. And the crunchy Gelang laut (Sesuvium portulacastrum) with tiny delicate pink flowers, creeps right into areas which are submerged at the highest tides.

Among the coastal trees were Buta-buta (Excoecaria algallocha) growing in mangrovey spots. Dotting the high shore here and there were several young Penaga laut (Calophyllum inophyllum). And one flowering wild Yellow-eyed pong-pong tree (Cerbera odollam), which isn't as rare as the Pink-eyed one, but still nice to encounter.

A whole bunch of mangrove trees had also settled in a sheltered area near the sea wall. They are so neatly spaced and of similar height that they look like they had been planted! 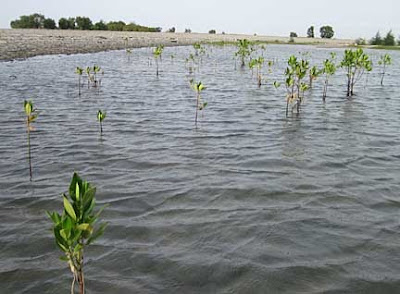 Alas, some of the mangrove trees were surrounded in a sea of litter. Mangrove seedlings float along with the currents, settling down at a sheltered place. Unfortunately, our man-made floating rubbish also do the same, and settle down in the same place. 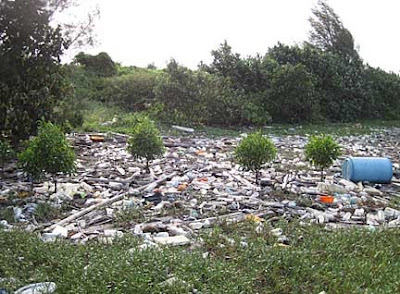 There is a great deal of rubbish piled up on this remote shore. All along the high water mark, more rubbish accumulating with every high tide. See Chay Hoon in the distance for scale. 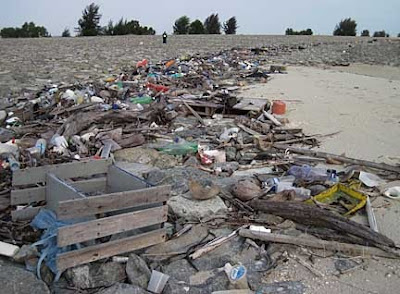 Along our shore walk, we even saw a TV on the sandy shore, and sadly also some abandoned driftnets with remains of the victims that such nets kill as long as the nets remain in the water. Which is almost forever as the nets are made of plastic.

There were also some fish traps. 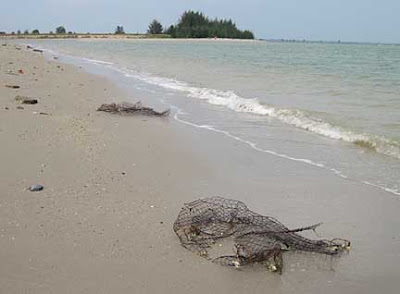 Even a remote shore such as this is not spared the mark of humans. Tire tracks of a vehicle that drove onto the sand dune. 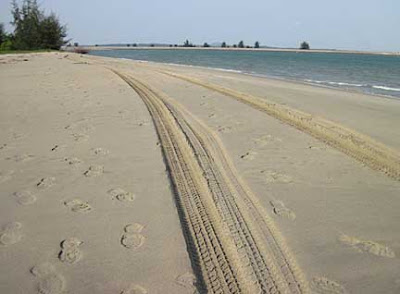 There was also extensive erosion along some parts of this reclaimed shore. 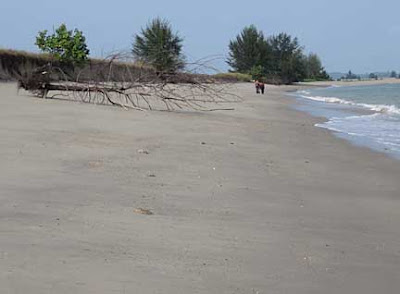 One piece of rubbish, however, seemed to have been put to good use. Travis showed us this huge orange block, an artificial sponge. And pointed out how bivalves had been wedged into the sponge, possible to make them easier to pry open? By birds? 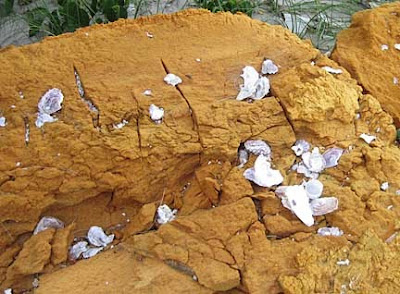 As the sun set, we headed home past very interesting looking areas next to the sea wall. 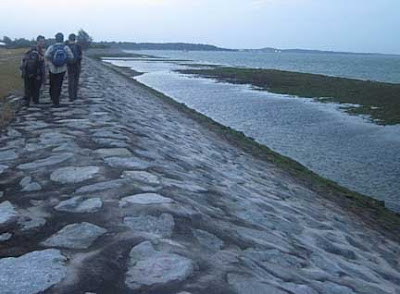 It was a long long walk, with exciting moments and amazing finds. But as soon as we got to the main road, we just collapsed onto the roadside! 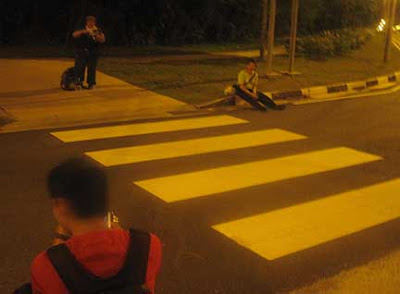 My feet are still hurting, but I can't wait to go back again. Thank you Travis for introducing such a special shore to us.

And what about the Pemphis? Here's an entirely separate post all about this special plant.

Read more about the OTHER interesting encounters in the blog posts below.