Groupers are undersea architects building habitats for others

A grouper has been found to excavate and maintain complex, three-dimensional structures that provide critical habitats for the spiny lobster and many other commercially important species. 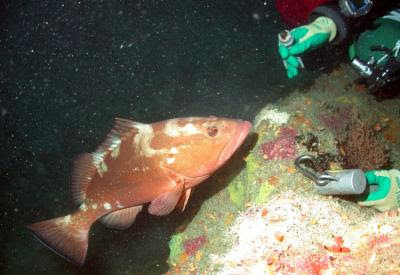 Photo from Florida State University Coastal and Marine Laboratory
The study of a grouper living on the coasts of the Americas observed the fish to not only dig but also maintain holes by carrying mouthfuls of sediment from the center of the pit to the periphery, spitting it out then brushing off the rocks with the tail fin.

Overfishing of such groupers can have a heavy impact on biodiversity. "You can't remove an animal that can dig a hole five meters across and several meters deep to reveal the rocky substrate and expect there to be no effect on reef communities," said one of the authors of the study.

TALLAHASSEE, Fla. To the casual observer in the Gulf of Mexico, the seemingly sluggish red grouper is more of a couch potato than a busy beaver. But a new study led by researchers at The Florida State University reveals the fish to be both architect and ecosystem engineer.

Most abundant along Florida's west coast but also found on watery ledges and in crevices and caverns from North Carolina to Brazil, the red grouper excavates and maintains complex, three-dimensional structures that provide critical habitats for the spiny lobster and many other commercially important species in the Gulf of Mexico. The researchers watched it work hard to remove sand from the sea floor, exposing hard rocks crucial to corals and sponges and the animals they shelter.

In fact, the red grouper's sandy architecture is a monument to the interconnectedness of species and the vital role such connections play in the structural and functional diversity of the ocean, suggests Felicia C. Coleman, director of Florida State University's Coastal and Marine Laboratory.

"Watching these fish dig holes was amazing enough," Coleman said, "but then we realized that the sites they created served to attract mates, beneficial species such as cleaner shrimp that pick parasites and food scraps off the resident fish, and a variety of prey species for the red grouper. So it is no surprise that the fish are remarkably sedentary. Why move if you are clever enough to make everything you need come to you?"

"Red grouper are the 'Frank Lloyd Wrights' of the sea floor," said University of California-Davis Professor Susan Williams, who collaborated with Coleman on an earlier, related study. "Its sea-floor associates include commercially valuable species such as vermilion snapper, black grouper and spiny lobsters. If the groupers are overfished, the suite of species that depends on them is likely to suffer."

Working along the West Florida Shelf, Coleman and colleagues observed the red grouper's excavating activities during both its juvenile stage in inshore waters and its adult stage at depths of 300 feet.

Carl Walters, editor-in-chief of The Open Fish Science Journal and a fisheries scientist at the University of British Columbia, points to the study's important implications for fisheries management and biodiversity protection. He said the research reveals the key role red grouper may play, through their modification of fine-scale habitat structure and quality, in the development of biodiversity on Gulf of Mexico reef systems.

"We suspected that the groupers created the habitat," Coleman said. "We found through a series of experiments that they not only dug the holes but also maintained them by carrying mouthfuls of sediment from the center of the pit to the periphery and expelling them through their gills and mouths, then brushing off the rocks with their tail fins."

As juveniles, red grouper excavate the limestone bottom of Florida Bay and elsewhere, exposing "solution holes" formed thousands of years ago when sea level was lower and freshwater dissolved holes in the rock surface. When sea level rose to its present state, the solution holes filled with sediment. By removing the sediment from them, the fish restructure the flat bottom into a three- dimensional matrix, which is enhanced by the settlement and growth of corals and sponges. Spiny lobsters are among the many species that occupy those excavations, especially during the day when seeking refuge from roving predators.

Loss of this habitat –– through the loss of red grouper due to intensive fishing –– has obvious consequences to the lobster fishery of South Florida, Coleman said. She warns that habitat engineers, like foundation species, must be maintained in a healthy state, or the consequences to fishery production could be severe.

"You can't remove an animal that can dig a hole five meters across and several meters deep to reveal the rocky substrate and expect there to be no effect on reef communities," Koenig said. "The juveniles of a species closely associated with these pits, vermilion snapper, are extremely abundant around the offshore excavations. It is possible that the engineered habitat is significant as a nursery for this species, which other big fish rely on as food. One could anticipate a domino effect in lost diversity resulting from the loss of red grouper-engineered habitat."

Suggested changes in fisheries management intended to reduce bycatch of sea turtles in the long-line fishery by pushing the fleet further offshore would increase the fishing pressure on red grouper and other ecosystem engineers, such as tilefish, found at greater depths, contends Coleman.

"Imagine the impact not only on red grouper and tilefish but also on a suite of deep-water grouper for which we have very little information, other than the fact that some of them are critically endangered," she said.

Go to http://marinefeeder.magnet.fsu.edu/faculty/benthichabitat.aspx for more about the red grouper study led by Coleman and Koenig, including a copy of the paper published in The Open Science Fish Journal (www.bentham.org/open/tofishsj/openaccess3.htm) and a brief video depicting the fish at work on the Gulf floor.