What can nudibranchs tell us about climate change?

Phyllodesmium lizardensis is not a very attractive slug, but it can help us better understand how reefs might be affected by climate change. 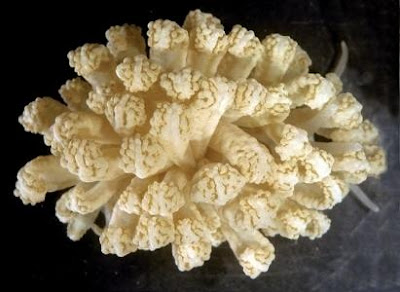 Photo from Dr Bill Rudman's fact sheet on this slug.
Coral bleaching is a dreaded potential consequence of global warming. When corals lose their algae symbionts (zooxanthellae), they turn white and may get sick and die. Today, a report by the Great Barrier Reef Marine Park Authority warns that the Great Barrier Reef is under grave threat from climate warming and coastal development, and its prospects of survival are "poor".

To better understand the relationship between corals and zooxanthellae, a recent study turned to a similar relationship among nudibranchs!

Some nudis are solar powered. These slugs eat corals and incorporate the coral zooxanthellae in their own 'tentacles'. In the slug, the zooxanthellae carry out photosynthesis and share the food produced with the host, as they did with their original coral host.

Phyllodesmium lizardensis is one of the slugs being studied. The tricky part is finding the slugs! 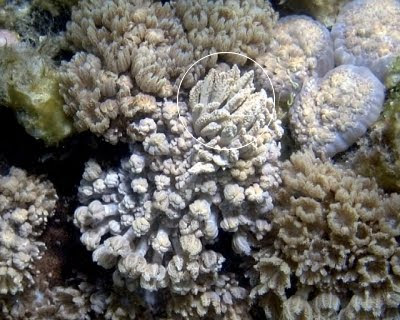 Photo from Dr Bill Rudman's fact sheet on this slug.

If you've never heard of a solar powered nudibranch then Dr Ingo Burghardt can enlighten you. This softly spoken marine zoologist became fascinated by these carnivorous sea slugs as an undergraduate student at the University of Bochum in Germany’s deep west. His doctoral thesis investigated the ecology, diversity and evolutionary history of these bizarre invertebrates and he has been awarded a one year postdoctoral scholarship by the German Science Foundation to gain a better insight into how nudibranchs might respond to climate change.

"Nudibranchs are really snails without a shell. A certain group of nudibranchs feeds mostly on corals and actually incorporate the zooxanthellae, from corals, in special structures in their cells. Zooxanthellae are single celled plants and the nudibranchs have somehow evolved to use the ability of plants to convert the sun’s energy into sugars and other nutrients. Hence the term 'solar powered'," said Dr Burghardt.

It's not the only trick up their oral tentacles. Remarkably, whilst some nudibranch species only keep their "captives" for a few days before digesting them other species have developed an efficient symbiotic relationship where the zooxanthellae can be kept alive for months. And the lack of a shell doesn't necessarily make them an easy meal either – nudibranchs often appear cryptic, matching their food in spectacular examples of camouflage and some species can even retain and recycle the stinging cells, nematocysts, from their "meals" and reuse them as part of their own armoury. It's not hard to see the appeal for ongoing research and it helps that nudibranchs can be found in some of the world’s most beautiful coral reef ecosystems.

"Australia actually has a very strong connection to nudibranch research. Dr Bill Rudman from the Australian Museum has been working with them for many years and it was not until the 1980s that Rosalind Hind from the University of Sydney proved that there was an exchange of metabolites. But we are still struggling to understand so much about them, how they evolved, even their life cycle," said Dr Burghardt.

It is this Australian connection that brings Dr Burghardt to Australia. His fieldwork on the Australian Museum funded Lizard Island Research Station focussed on the especially diverse Phyllodesmium genus, in particular Phyllodesmium lizardensis a relatively new species. Dr Burghardt believes that nudibranchs are good model organisms. Comparative studies with other invertebrates that have zooxanthellae, like corals, could answer some vexing questions about climate change impacts and coral bleaching mechanisms.

In corals, where there is a high diversity of symbionts, scientists hypothesize that under changing climatic conditions corals adapt and switch symbiont types. Do nudibranchs react, or adapt, in the same way to environmental stress? Do they share the same types of symbionts as the coral they feed on? To answer these questions first you have to catch your nudibranch.

"It was very hard to find them initially. They only feed on one particular coral species. Amazingly I eventually found them living on a pipe only a few metres from shore. In the laboratory I used a flow through system and PAM (pulse amplitude modulated) fluorometry techniques to measure effects of elevated water temperatures, high irradiance and low salinity on photosynthetic activity. Although the studies were only short term, lasting six weeks, the results showed that whilst nudibranchs and corals share the same symbiont types, they respond differently to environmental stress," Dr Burghardt said.

Interestingly the results showed that, despite previous hypotheses that it is the zooxanthellae that are the most sensitive part of the symbiosis, the PAM values were quite different in corals and nudibranchs. Also soft corals die when the water temperature goes above 32°C even though the zooxanthellae remain healthy. In nudibranchs, under the same conditions, the opposite occurs – the animal host survives but the symbionts show reduced photosynthetic ability causing PAM values to drop.

"I believe that it’s a much more complicated system than we think. We need to look at it as a 'holobiont' organism, that is coral plus algae, or nudibranch plus algae. It also shows that the biochemistry of the host plays a very important role in coral bleaching. Future research into the biochemistry of the parallel systems of corals and nudibranchs could yield some very interesting data," Dr Burghardt said.

As part of his scholarship Dr Burghardt has also been able to take nudibranch specimens to the Australian Institute of Marine Science Townsville laboratories, for further histology and genetic investigations, and is currently based at the UTS Plant Functional Biology and Climate Change Cluster (C3) to collaborate with PAM expert C3 Director Associate Professor Peter Ralph and his team. He is also still hot on the trail of elusive nudibranchs.

"I’m taking the opportunity to look for another species Ptaraeolidia ianthina that lives in both tropical and temperate water and do some comparative studies because it is known that they house different types of zooxanthellae. So I’ll be doing some snorkelling in Sydney Harbour. Only problem is I'll need a bit of luck to find them. We don’t know what they feed on so we don’t know where they are," Dr Burghardt said.