I got my copy of the much-awaited Semakau Book! From the elegant hands of Alicia herself no less. 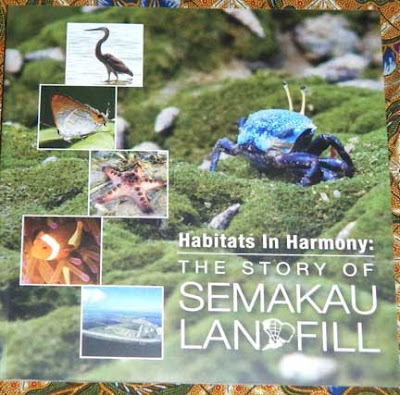 Here's some of my thoughts as I went through the Book.

First off, I love the title! It's meaningful and melodic. But I have a soft spot for alliterations. This slim volume is packed! It begins with stories about life on Pulau Sakeng and Pulau Semakau before they were turned into a landfill. I know Marcus did a lot of research and interviews for this. 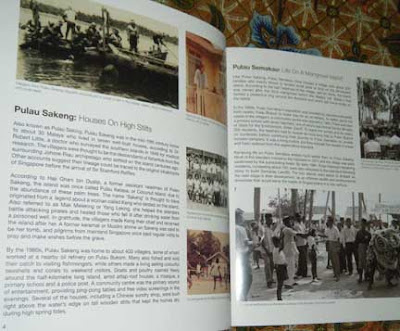 (Sorry about the lame photos of the Book in this post, I don't have a scanner...don't ask). Then there's a chapter of how the landfill was built and how mangroves were replanted and lots more interesting behind-the-scenes stories. Marcus did lots of interviews with the people who made these possible. Quite impressive, the technology, thought and effort! 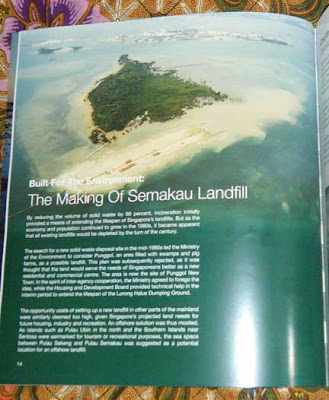 There are also never-before-seen photos of what it looked like as the landfill was being built. It helps us better understand what happened to the original habitats. Many people think the marine life and wildlife occurred BECAUSE of the landfill. But actually, there were beautiful reefs and mangroves BEFORE the landfill was built. The marvel is that some of these habitats have been retained and continue to thrive AFTER that. This is a testament to the care taken in building and operating the landfill. 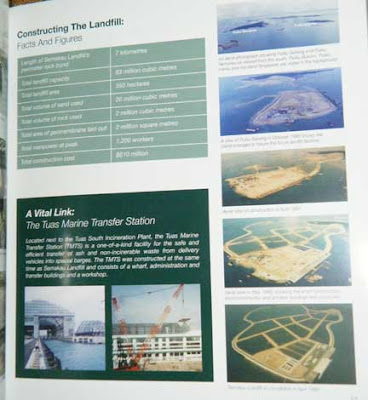 While our first thought of Semakau wildlife is marine life, the Book gave us an opportunity to fully explore and share about ALL wildlife that can be found here, including the landfill itself. There is, for example, an abundance of wildflowers growing on the recovering grasslands that have taken over the cells that are already filled up. 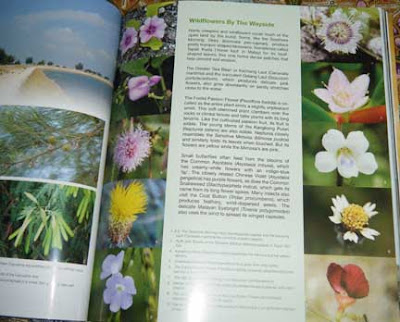 And with all these flowers, of course there are butterflies. Khew Sin Khoon and his relentless team from Butterfly Circle visited many times to document and share awesome photos and findings. They discovered 33 species of butterflies, a quarter of which are uncommon with two species which are new records for Singapore! I was especially glad to be out with them, not just because they were such lively company, but also because every trip with Butterfly Circle was sunny! 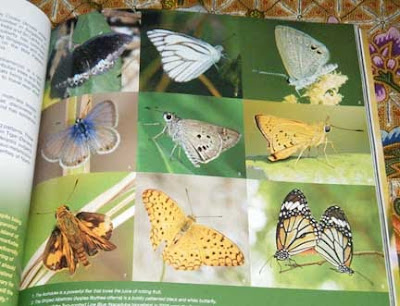 We were also very fortunate to have the fearless John Lee with us on our trips to do the first survey of wasps and bees on Semakau. And wow, he sure found some stunning stingers. A total of 18 species including one of the largest wasps in the world! 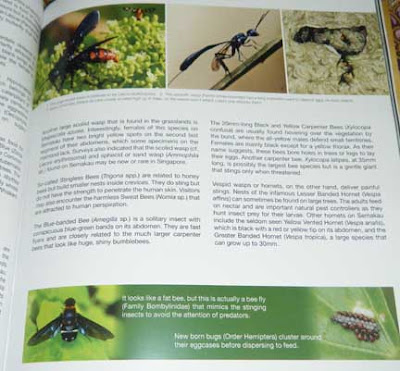 Not to be forgotten were the dainty but just as ferocious damselflies and dragonflies. Tang, Robin and Eric Gilbert helped to survey these beauties and they found 9 species. Of which one is uncommon and another might be a new record for Singapore! Wow! 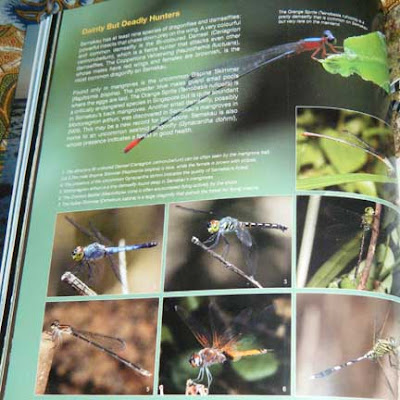 There are of course, lots and lots of spiders! Which Joseph Koh kindly helped identify. And all kinds of bugs and other critters too. 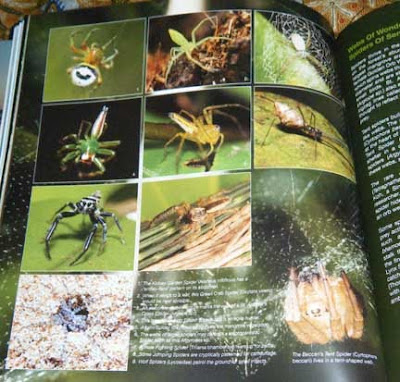 The intrepid Vertebrate Team led by Subaraj made many evening and early morning trips to survey Semakau. And they found a whole bunch of reptiles and amphibians. Subaraj's discovery of a very pretty Common Wolf Snake was a highlight of one of the trips. I particularly enjoyed the company of Serin, who has grown up so much! A professional nature guide of many years, Subaraj also generously shared about the birds and other natural and social history of Semakau. 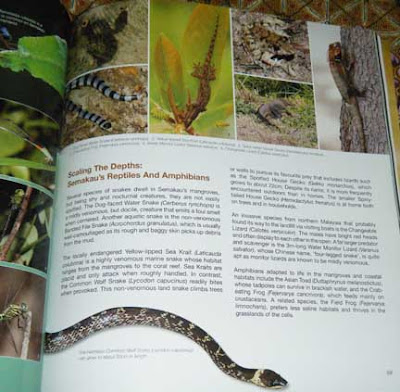 Birds, of course, are plentiful on Semakau. Dr Ho Hua Chew of the Nature Society (Singapore) and his team did a special survey for the Book and raised the number of bird species found here from 66 to 88! These included the Sunda Pygmy Woodpecker, Barred Buttonquail, Grey Wagtail and the Oriental White-eye. The team also contributed amazing photos of the birds. 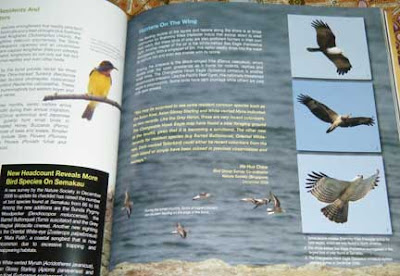 The mangroves are truly magnificent on Semakau. And Dr John Yong and his team led by the tireless JC Chua together with Shufen identified many special trees, including the grove of many tall old Pink-eyed pong pong trees (Cerbera manghas) that no one seemed to have noticed before! Dr John believes it is possibly the largest population of these Critically Endangered trees in Singapore. I will also not forget the most enjoyable back mangrove trip with Dr Tan Swee Hee and the diehard team from the Raffles Museum of Biodiversity Research to check out for crustaceans and other critters. 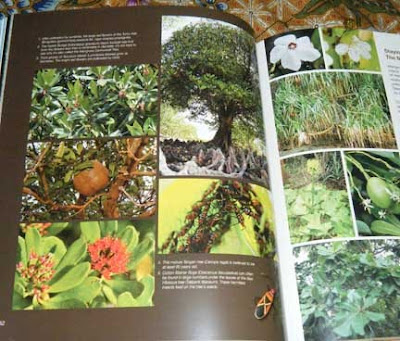 But the biggest surprise for me were the magnificent Api-api jambu (Avicennia marina) trees that had settled in the landfill cell! We would not have discovered them if it was not for our effort to check out as much of the landfill as we could for the Book. When we last visited, Shufen pointed out that there were FOUR of them, when all along I thought there were just two. It is believed that there are fewer than 20 of these trees in Singapore and Semakau has the healthiest grove! There are also some smaller Api-api jambu trees on the shores of Pulau Semakau itself. 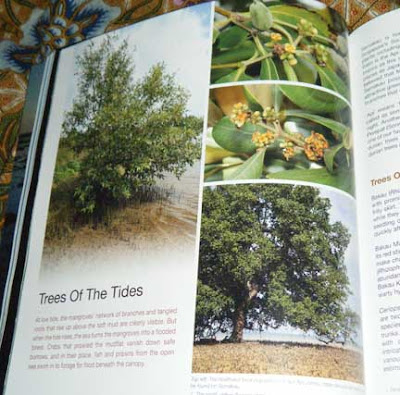 Of course, a vast ecosystem on Semakau that cannot be ignored are the seagrass meadows. The Book has lots about the seagrasses and mind-boggling marine life there. And about TeamSeagrass too! I'm glad as I am very proud of this volunteer effort to monitor the seagrass meadows at Semakau, as well as at several other sites in Singapore. The Team's work is part of international Seagrass-Watch, members are trained and certified to use non-destructive standardised methods and processes are audited. This results in valid data that can be compared internationally as well as across local sites. Thus allowing us to get a good sense of just how special Semakau's seagrass ecosystem is. 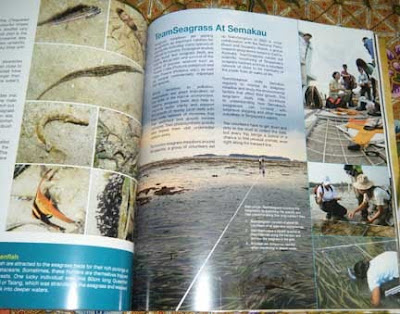 Similarly for the reefs of Semakau, the ReefFriends programme of the Blue Water Volunteers conduct regular non-destructive coral reef surveys here as well as other reefs in Singapore. The surveys are conducted by trained volunteers using a combination of Reef Check and AIMS Line Intercept Transect (AIMS LIT) methods, and the findings shared with international and local agencies. The ReefFriends programme has been conducted since 2003, while TeamSeagrass was started in 2006.

A large proportion of the Book is devoted to the most famous part of Pulau Semakau: the reef flats and reef edge. Countless people have joined the intertidal walks to view these for themselves. I am very glad to have been able to get these walks started. In the Book are photos of Kok Sheng and July leading some visitors on a typical walk. And the sightings on the reef flats are very well blogged about by the volunteers who guide and work at Pulau Semakau. 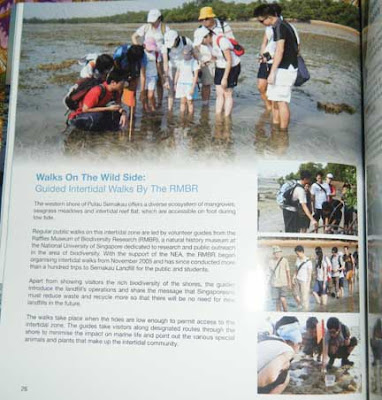 So what is very special to me are the glimpses in the Book of marine life that we seldom see. This is made possible by the hard work by Eric Leong and his team of underwater photographers. A true master of his craft, Eric has provided stunning images of a side of Semakau that few of us have seen. Of all kinds of colourful hard and soft corals and their relatives. 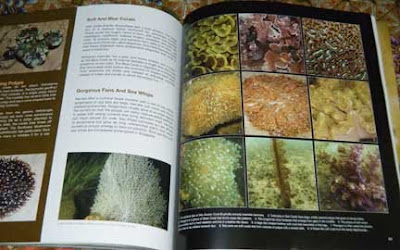 And the fascinating animals that live on other animals. Often they are extremely well camouflaged so only an experienced underwater photographer like Eric could have found and photographed them! 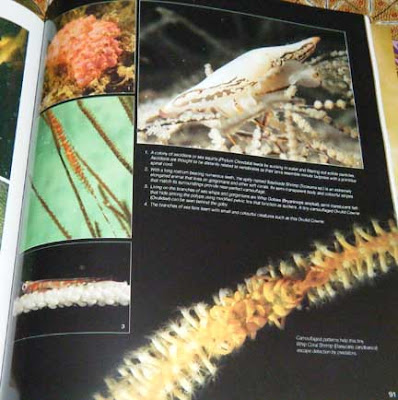 Fishes abound in the waters of Semakau, and Eric has lots of great photos of them. There was also a feature on the Coral Nursery at Pulau Semakau. This is the first coral nursery in the region that uses "coral of opportunity" (i.e. coral fragments that lie free on the reef having been fragmented by some impact) as seed corals for growth and transplantation. This is unlike other commercial methods of harvesting corals, which breaks up healthy coral colonies for planting. 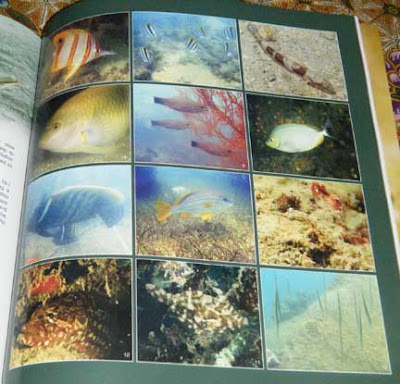 We were very fortunate that dolphins were not only sighted (which happens often) but also photographed near Semakau shortly before the Book was finished. Karenne Tun shared her marvelous photos of these delightful wild creatures that live in the waters off our Southern Islands. Karenne is among the many researchers who are conducting studies of various aspects of Pulau Semakau as well as our other reefs and shores. 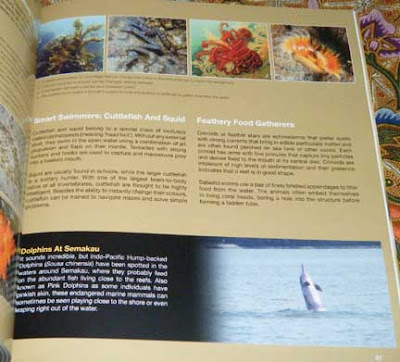 The Book ends with a really snappy shot of TeamSeagrass at work taken by Eric. I really love this photo! 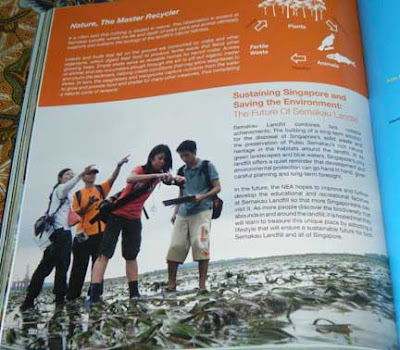 There is a long LONG checklist of flora and fauna found on Semakau too! Six whole pages of really tiny text. This is based on existing information such as from Prof Chou, and also from the Semakau Survey done by Zeehan and Tse Lynn with volunteers in 2005, plus the frenzy of field trips by various experts over about four months. 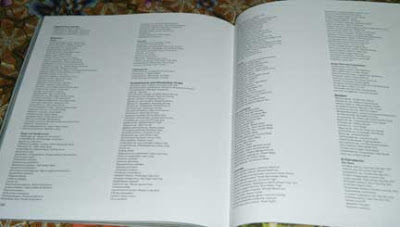 I feel this is just the tip of the iceberg. As more scientists and naturalists survey Semakau, I am sure there will be more discoveries. For example, Dr Daphne Fautin, the world authority in sea anemones, visited Pulau Semakau (in addition to our other shores) and took a closer look at some of the anemones commonly seen there. Some of them, we still have no idea what they might be. It takes a lot of work to sort out ID, even by experts. So it will take a bit of time to uncover all the treasures at Pulau Semakau and on our other shores.

Right at the very end of the Book, next to a list of contact and weblinks for more information, are the two lovely young ladies who patiently put up with the photo shoot, as one of the options for the cover page. I'm glad their photo eventually did get used in the Book as the young ones will inherit Semakau. 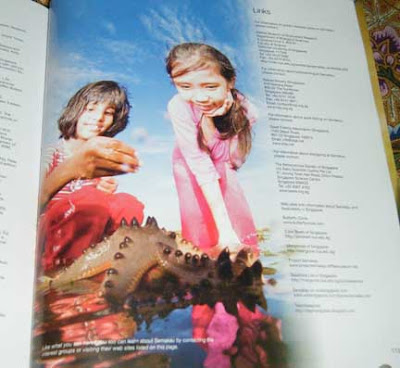 Going through the Book brought back good memories of the field trips, erasing all the aches and pains of those endless kilometers of walking, getting wet and cold and nearly killed by lightning and of course being eaten alive by a bazillion ferocious mosquitos that bite THROUGH your clothes! Ok, I guess I haven't really forgotten those episodes yet.

A lot of people contributed and worked hard towards making the Book possible. Their names fill up an entire page of the Book, in tiny print. I am most grateful that so many busy volunteers made the time and effort and generously contributed towards the Book. It would not have been possible without them.

Through the Book, I have made many new friends. Alicia was not just the producer of the Book but also a intrepid nature lover who came on many of our field trips and continues to join us in our trips to other shores. I also got a chance to spend time with Eric and others I've only briefly met before. And I spent many pleasant hours with old friends, making new discoveries in adventurous explorations. I have learnt so much from all and I remain overwhelmed by their enthusiasm and ready contributions of their vast experience, stories, photos and more.

Of course, there were lots of other aspects of Semakau that are featured in the Book that I couldn't cover in this post.

Go get a copy and savour the wonderful photos and delightful stories for yourself!

More about the Semakau Book on the NEA website with preview pages.

It is on sale for S$24.90 at the Customer Service Centre, Level 2 Environment Building, 40 Scotts Road and the Semakau Landfill.

For more information about the Book, please contact NEA at 1800-225 5632 or email contact_nea@nea.gov.sg

More links
The launch of the Book (and walks led by Marcus) led to several media articles about Semakau recently.