A sliver of living shore at Tuas

It was threatening to storm, but in the end, we had a gorgeous blue-sky day over Tuas this morning. 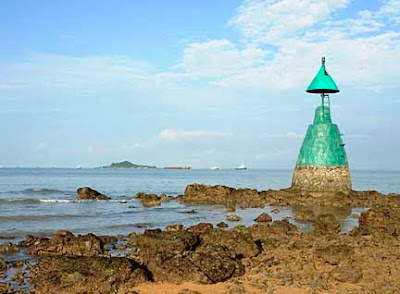 We're out with the volunteers of Schering Plough who monitor the seagrasses on this sliver of land that escaped the Tuas reclamation. The Merawang Beacon marks the very end of this shore, with the Malaysian island of Pulau Merambong on the horizon.

Going out with Schering Plough saves us lots of boat money as we access the shore via their premises. Sheryl kindly leads us in early. We slide down the seawall and then nervously make the crossing through stingray-infested waters. To the rocky outcrop marked by the beacon. 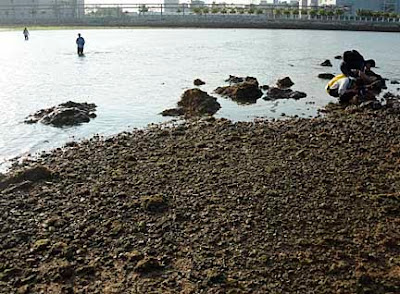 During the crossing, I use submersible sneaky cam to take photos while the Big Cam is safe in her waterproof bag. With several Blue-spotted fantail rays (Taeniura lymma) zooming about in the murky waters, I carefully walk and take some photos of amazing marine life that flourish here. 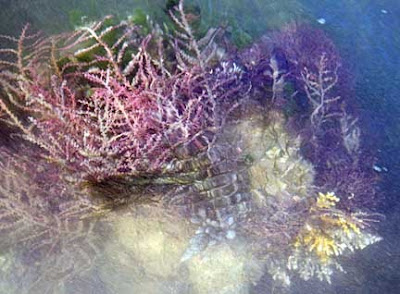 There are lots of colourful candy hydroids that don't sting at all. As well as many more large white stinging hydroids that pack a powerful punch. I worry about poor Marcus who didn't wear full length pants today. But he emerged unscathed. 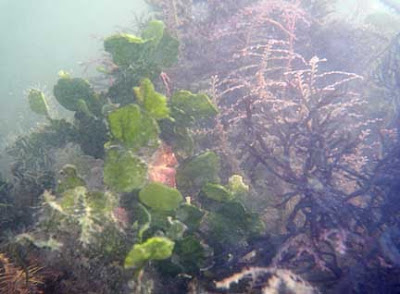 I also saw several small sea fans of various kinds. Including this orange one in the shape of a candelebra. On the way in, Marcus also saw a Snaky anemone (Macrodactyla doreensis). 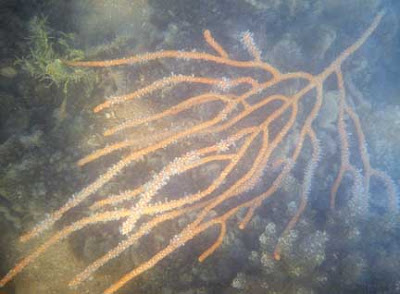 On the beacon side, the rocks are coated with more marine life! Mainly flowery soft corals (Family Nephtheidea) of all kinds. It's very splashy here as boats zoom past the beacon. 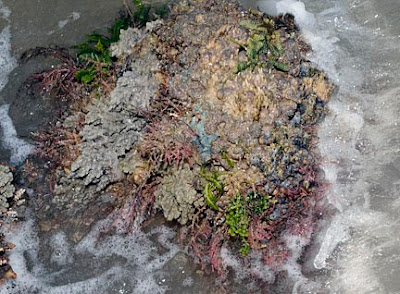 There's a lot to explore on this rocky outcrop which is teeming with marine life. As the Schering Plough volunteers arrive on the shore, I head back to the high shore to say hello. And check out this shore. It was nice to see some hard corals growing here, like this bunch of Flowery disk corals with large polyps (Turbinaria sp.) 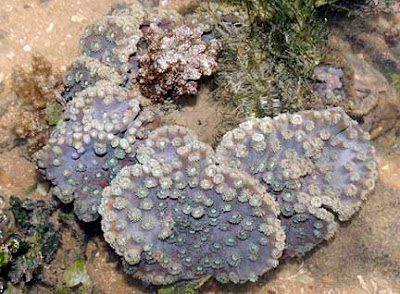 There are lots of soft corals and sponges here too. 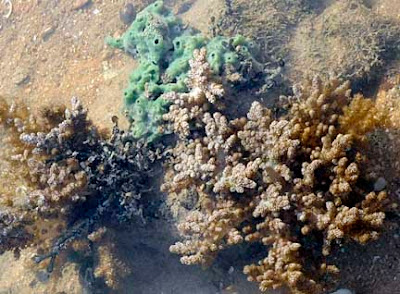 And these odd leathery soft corals (Family Alcyoniidae) that look like muffins, growing among melted chocolate sponges (Chondrilla australiensis). These are all very much alive although they may look boring and dull. 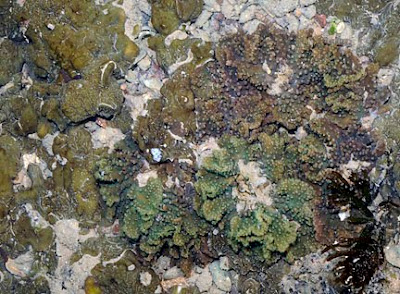 If you look closely, you can see the tiny greenish polyps in the shared common leathery tissue of the colony. Other abundant encrusting animals included colonial anemones or zoanthids (Order Zoanthidea) of all kinds. 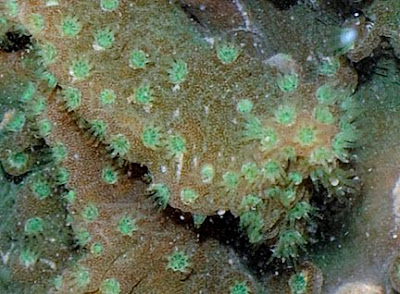 There were a LOT of ball flowery soft corals on the shore today. And these are homes to various well camouflaged animals. Can you spot the false cowrie (Family Ovulidae) that is hidden in plain sight on this soft coral? 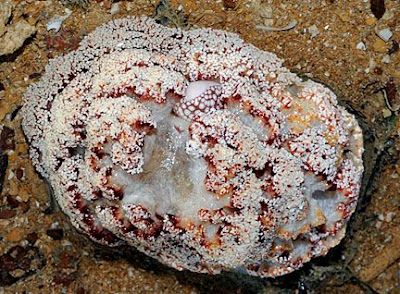 This rather large snail has a plain white shell but covers it with its fleshy mantle which matches the soft coral exactly! This is my first time seeing this snail in a ball soft coral. I usually see them in pink flowery soft corals. 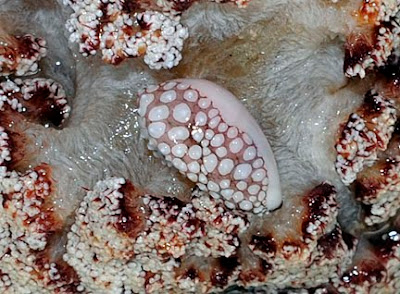 These soft corals also usually harbour a pair of white snapping shrimps. I didn't see any today, but did spot a nearly transparent shrimp. 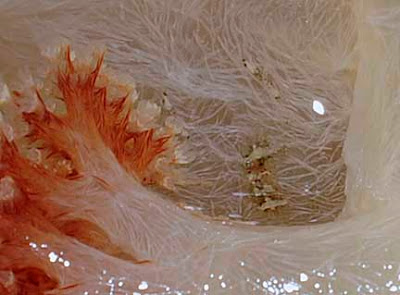 Shrimps are also found on the large Haddon's carpet anemones (Stichodactyla haddoni) which are abundant on this shore. But they were rather shy today and I only managed to get a shot of the butt end of this anemone shrimp (Periclimenes brevicarpalis). 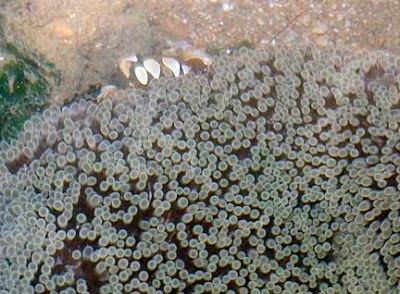 Today, there is a lot of Coin-shaped seaweeds (Halimeda sp.) that have taken up a large area of the shores. The thicket of seaweeds seem to provide happy homes for various animals, including these two different kinds of sea cucumbers. The orange one with the bluish stripes is now common again on this shore. As well as many Thorny sea cucumbers (Colochirus quadrangularis). 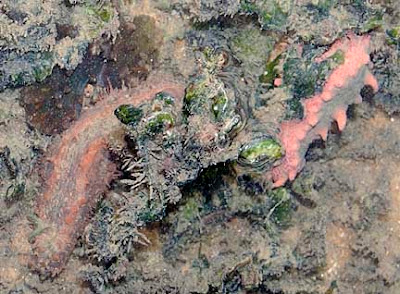 The sandy shores were also full of life. This odd 'furry' thing is probably the tip of a Spiky sea pen (Scytalium sp.) that had retracted into the sand. 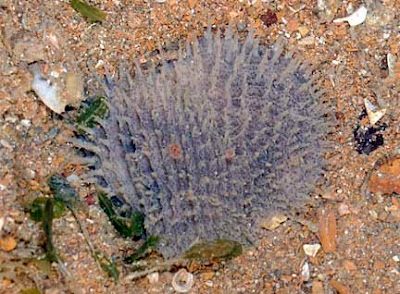 While I managed to find one of these rarey Laganum sand dollars (Laganum depressum), there were lots and lots of Cake sand dollars (Arachonoides placenta). 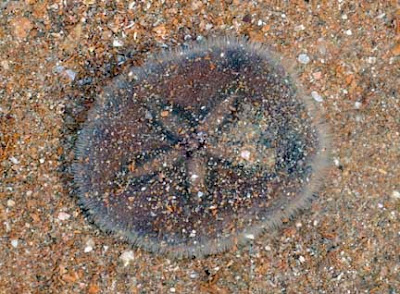 I didn't see any weird living snails, but did come across this shell of an intriguing snail.

Meanwhile, the rest of the team have stayed a little longer on the outrock and I had to yell at them to get back before the tide got too high. 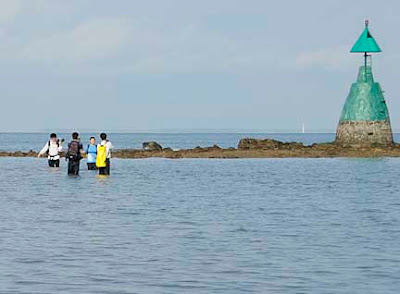 It's important to get back in good time, not only to avoid stepping on a stingray in high water. But also to avoid getting wet underpants. A good routine to follow in tricky situations is to let one brave soul lead the way, while the rest follow behind. This also minimises the impact to the shore. 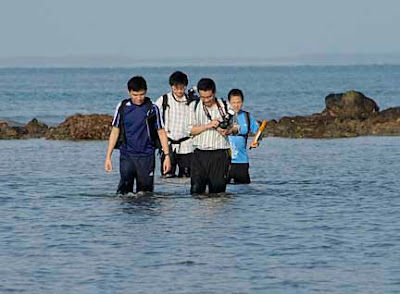 It got really hot after a while, and I headed for the welcome shade of a Morinda tree growing on the seawall before I suffered from spontaneous combustion. The rest of the team carried on scouring the shore. Mei Lin is sensibly using an umbrella. 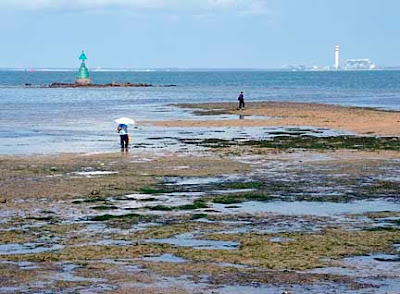 They continue to find lots of interesting stuff! 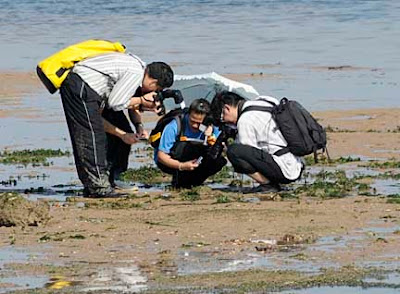 We shall have to wait for their blog posts to find out more.

It's good to see that this shore is still doing well, and is being looked after by Schering Plough. Thanks to Sheryl and Helen for letting us come along for the TeamSeagrass monitoring today.