There was an ill wind blowing on us today at Tanah Merah. Cold with a certain kind of ozoney smell, not strong but purposefully constant, full of portend. 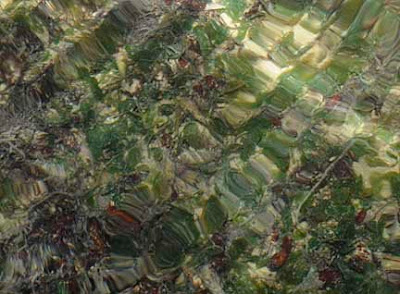 Chay Hoon remarked "I don't like this wind". Yes, neither did I. Because this kind of wind is a harbinger of wet weather, and also because it's hard to take photos in the wind.

There were lots of fishes and other marine life in the clear cold water. But the ripples on the water surface make it impossible to shoot. 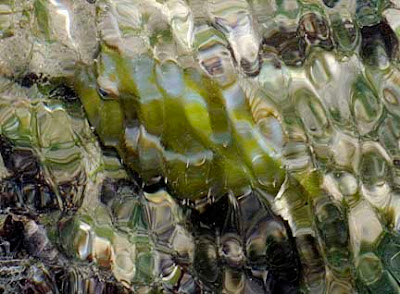 James and I had to abandon the deeper water to Chay Hoon, who with her trusty underwater camera found and photographed a whole bunch of amazing creatures on the seawalls.

I headed out to less ripply waters. And caught this tiny swimming crab (Portunus pelagicus) which seems to be snacking on another crab! 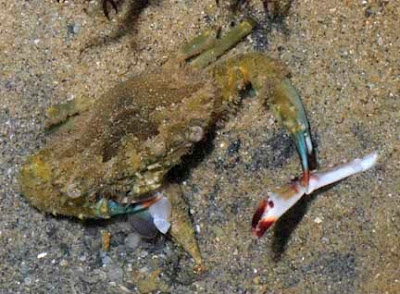 And had a brief glimpse at these two snapping shrimps (probably Alpheus lobidens) that were sharing the same burrow, but were of two different colours! 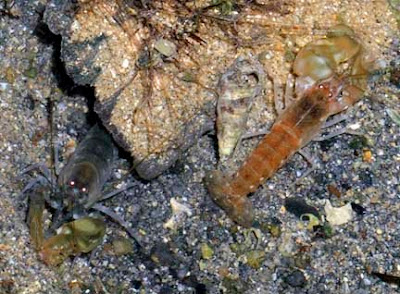 Also in less ripply waters, were seagrasses! I haven't checked these out properly on my previous trips. There were several patches thick with Spoon seagrass (Halophila ovalis), some with larger leaves and some with really tiny leaves. 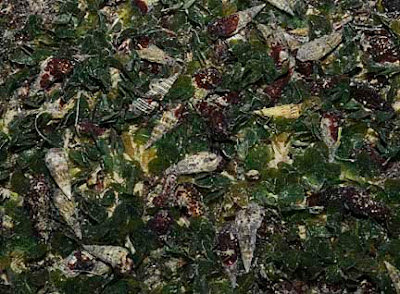 And like everywhere else on the shores, these were dotted with countless Zoned horn snails (Batillaria zonalis). I'm seriously thinking of calling these snails 'Bazillion lagoon snails': they are often encountered in mind-boggling numbers on shallow silty lagoons. You never really see just one of these snails.

Because these snails are so annoyingly abundant, we often don't look closely at them. But there are all kinds of other animals among them. I was so focused on the little red shrimp that I missed the well camouflaged larger crab on the right side of the photo, until I processed the photo. 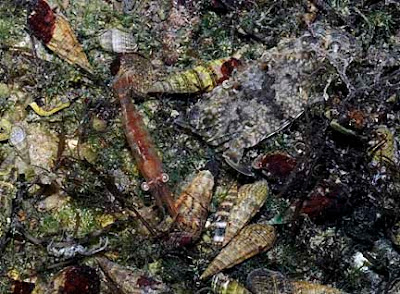 There are also many creatures that look very much like the 'Bazillion' snails! 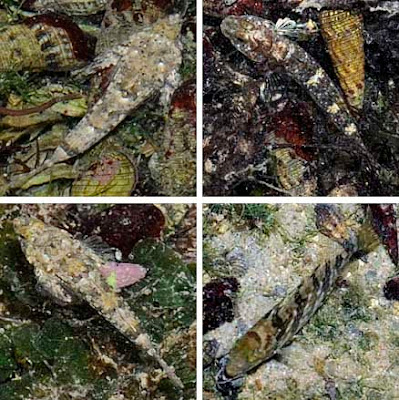 These little banded fishes are really hard to spot among the snails, until they swim quickly away. On the top right, some kind of goby (Family Gobiidae), below it a tiny rabbitfish (Family Siganidae) and the left, two dragonets (Family Callionymidae).

These ornately patterned dragonets were quite abundant today. These bottom-dwelling fishes have a pointed, downward facing mouth which is used to pick off small animals from the surface. Instead of scales, the body is covered in a tough skin and usually coated with mucous that has a bad taste and smell. So they are sometimes also called stinkfishes. The gill opening is just a small hole, usually on the upper side of the head, with a strong spine near it. 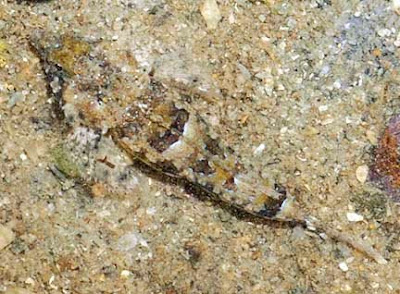 The ones at Tanah Merah look different from the Schaap's dragonet (Callionymus schaapii) that we commonly see at Changi. I've seen similar dragonets at various other reefy shores. Probably time to make a new factsheet on these dragonets.

Among the seagrasses, we found three different kinds of sea hares (Order Anapsidea)! 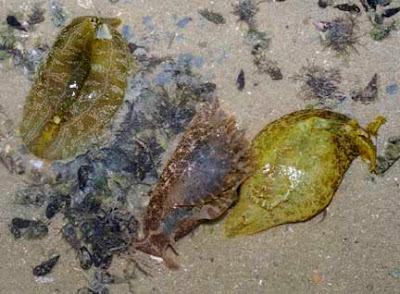 We saw one Geographic sea hare (Syphonota geographica) (photo on the right). And several individuals of the one in the photo on the left. We don't know its ID and I call it the Spotted sea hare.

We also saw one Extraordinary sea hare (Aplysa extraordinaria), a well-named creature with a striking pattern on the insides of the pair of 'wings'.

I also came across a small but lush patch of Needle seagrass (Halodule sp.). The grass had broad blades and was very fresh and green!

And in the middle of this tiny patch of grass was a pair of Spotted sea hares. 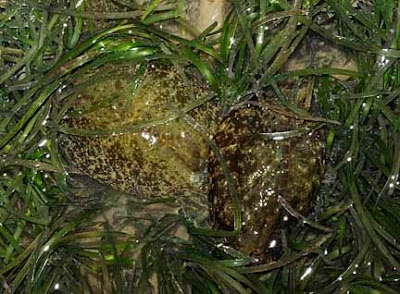 There were also signs of sea hare egg strings on the seagrass patches. They look like pink 'bee hoon' noodles.

Chay Hoon saw some Tape seagrass (Enhalus acoroides) today too, with a tiny blenny sitting on the seagrass blade. Seagrasses do make for a livelier shore!

James found this olive-coloured flatworm that seemed determined to swim upside down. 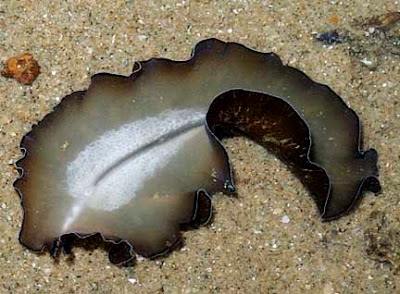 I came across another flatworm that was well 'plastered' against the surface. Is it eating something? I didn't disturb it as flatworms are very fragile and disintegrate when stressed. Also, they have a complicated way of eating. 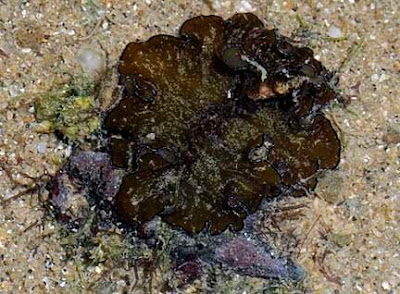 Being flat means most flatworms can't 'swallow' their prey. Instead, the pharynx (a part of the gut) is pushed out through the mouth. The pharynx engulfs the prey outside the worm's body. Or digestive juices are injected into the prey and the resulting liquefied meal is then sucked up.

Near the midwater mark, I came across a small Haddon's carpet anemone (Stichodactyla haddoni). Despite its dimunitive size, there were several tiny anemone shrimps living on the anemone!

It was a little disturbing to see several patches of these bright bluish fuzzy stuff. 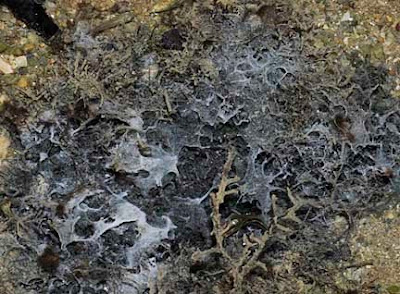 It's made up of fine fibres that disintegrate when you touch it. I have no idea what it is (or was) and whether it's something to be worried about. 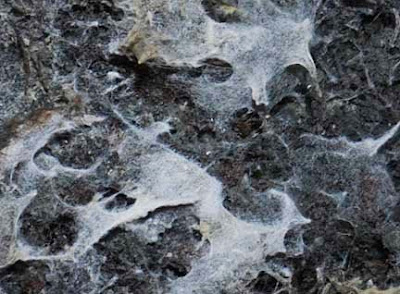 The closest thing I've seen to this is the remains of sponges when they 'melted' at Chek Jawa during the 2007 floods. It did rain alot yesterday.

As the tide came in, I checked out the rockier area of the high shores. There were lots of the very handsomely grooved Planaxis snails (Planaxis sulcatus) (photo on the left). Among these Planaxis snails were some strange snails that I've not seen before. 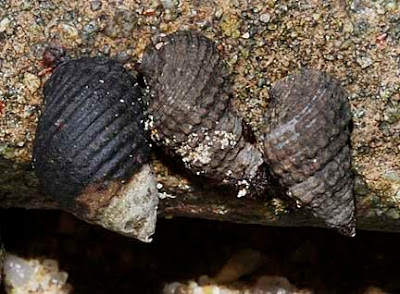 And on the high shores, were various intriguing empty shells! 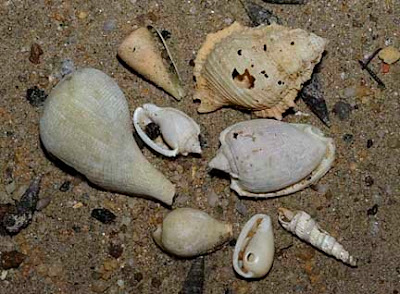 We must come back again and try to find some of these snails alive!