A sea star species has been found to grow 'dramatically' faster in hot and acid seawater. An increase in temperature of just three degrees and doubling of CO2 concentrations enabled the Purple Ochre Sea Star to grow almost twice as fast as it normally would over a period of ten weeks. 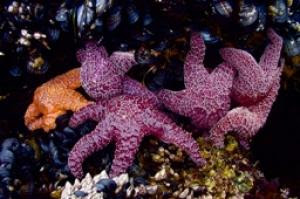 The Purple Ochre Sea Star is considered a keystone species—a species that exerts a disproportionate effect on their ecosystem by preying on other animals.

New research by UBC zoologists indicates that elevated water temperatures and heightened concentrations of carbon dioxide can dramatically increase the growth rate of a keystone species of sea star.

The study is one of the first to look at the impact of ocean acidification on marine invertebrates that don’t have a large calcified skeleton or external shell, and challenges current assumptions about the potential impact of climate change on marine species.

The findings were published online this week in the Proceedings of the National Academy of Sciences.

An increase in temperature of just three degrees and doubling of CO2 concentrations enabled the sea stars to grow almost twice as fast as they normally would over a period of ten weeks.

"This means the sea stars could potentially reach adulthood in about half the time it would typically take–and consume more mussels, their main diet, at much higher rates," says Gooding, a PhD student in the Department of Zoology working under the supervision of UBC Assistant Professor Christopher Harley.

At the end of the period, sea stars reared in warmer, more acidic waters weighed 17 grams, compared to control sea stars that weighed an average of only 11 grams. In contrast, existing studies suggest that an increase in temperature and CO2 levels hinder growth in most species studied so far—usually more calcified species.

"This complicates current assumptions. It looks like increased CO2 may not have negative effects on all marine invertebrates, suggesting that predicting the impact of climate change should consider how different organisms respond to changing climatic variables."

The Purple Ochre Sea Star is a cold-water species of sea star that can be found anywhere from Alaska to Baja California. It is most commonly found in the North Eastern Pacific. They can actually range in color from purple to orange to brown and have five rays that can range in length from 10 to 25cm.

They are considered a keystone species—a species that exerts a disproportionate effect on their ecosystem by preying on other animals.

Links to more
Latest media articles about ocean acidification on the wildsingapore news blog.
Posted by Ria Tan at 9:05 AM