The weather determines incomes of poor fishermen living on Indonesia's remote islands. Many, who only own small boats, cannot take the risk of confronting the big waves on the open sea. While fishermen on bigger islands like Java can simply change jobs during rough weather, those living on small and isolated islands do not have much choice. With a seaweed cultivation programme they were now able to earn a living throughout the year without falling into debt. 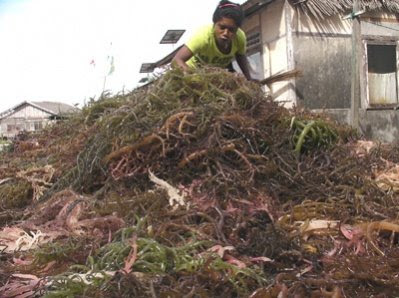 Seaweed put to dry under the sun in Aru Islands, Maluku province. Poor fishermen in isolated islands like Aru and Buton in Southeast Sulawesi were encouraged to cultivate seaweed to help improving their economy. (JP/Asep Saefullah)

Living in a remote island still means limited access to many things.

For poor fishermen in the Aru Islands regency in Maluku, who face this situation year after year, this is a hard fact of life.

Surrounded by sea, their income is very much dependent on weather. Many, who only own small boats, cannot take the risk of confronting the big waves on the open sea.

While fishermen on bigger islands like Java can simply change jobs during rough weather, those living on small and isolated islands do not have much choice. They simply cannot go to other places to search for new jobs.

On Aru, where people have to take a boat for hours to reach the regency’s capital, Dobo, many end up with no significant income to support their families.

This situation encouraged the Sitakena Foundation to introduce a seaweed cultivation program to improve the livelihood of residents on the islands.

Robo Djambumir from Selmona village, which is located south of the Aru Islands and a seven-hour boat trip away from Dobo, was grateful for the program.

He said with the program the residents were now able to earn a living throughout the year without falling into debt.

“There is life now, more life in Selmona, because of seaweed,” he said. “We don’t have difficulty getting food and can finance our children’s education in the city.”

The improvements in the quality of life for Robo and the residents of Selmona village on Aru are also enjoyed by Tahinuddin in Sulaa village on Buton Island in Southeast Sulawesi.

In 2006, Tahinudin, together with seven of his friends who cultivated seaweed, formed a group called Sabar Menanti.

The Coastal Area Development Network (JPKP) is a self-supporting institute on Buton Island that helps the group.

When harvesting seaweed for the first time in 2007, Tahinudin recalled that he got 1.2 tons of dry seaweed.

At that time, the seaweed price in Bau-Bau, the main city on Buton Island, was Rp 4,900 a kilogram (about 50 US cents), meaning he earned more than Rp 5 million from a venture that had a start-up capital of less than Rp 2 million.

“I got Rp 3.5 million profit at that time. From the next harvest, I had 2 tons,” Tahinudin said.

For the second harvest, he got a much better profit with a selling price of Rp 6,200 a kilogram.

One of the network’s members, Asman, contributed to the Sabar Menanti group’s success by helping the members, who diligently took care of their crops, and keeping up their spirits throughout the process.

“Within the group we’re learning together how to best take care of the seaweed. The results have been quite extraordinary. In November 2008, Tahinudin was able to produce 3 tons,” Asman said.

Since January last year, Tahinudin, together with other group members, have started undertaking other business development programs. As well as cultivating seaweed, they now raise seaweed seedlings.

Tahinudin said he saw this program as a promising business opportunity — fully aware that the increasing number of people cultivating seaweed would also raise demand for good seaweed seedlings.

“It takes less time to process seaweed seedlings. The work is done between January and May or throughout the year,” he said. They simply need to adjust the planting time for the seaweed.

The seaweed seedlings cultivated by the Sabar Menanti group in Wantopi village can produce up to 360 clumps. The selling price for one clump is Rp 50,000. So they are able to get an income of around Rp 18 million from a single planting of seedlings.

The task of marketing the seaweed seedlings is carried out in Bau-Bau city and Buton regency.

Through to the cultivation of seaweed for the past three years, the life of Tahinudin and other group members has become more prosperous.

He said, “I can buy motorboats to use at sea and motorcycles to use on land, all because of seaweed.”