"Continuing reclamation on Jurong Island will result in a land mass of about 3,200 hectares." 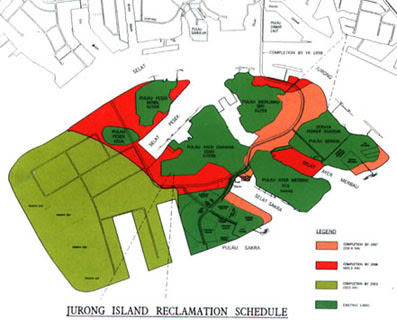 from Jurong Island: Developing and Integrated World Class Petroleum and Petrochemical Hub on the Chemical and Process Engineering Centre, the National University of Singapore.
To cope with an expanding island, work on a second fire station was started on the Island. It will be equipped with Hazmat or Hazardous Material response capabilities. With two operational fire stations, the Singapore Civil Defence Force is confident it can respond to an emergency at any location on the island within eight minutes. 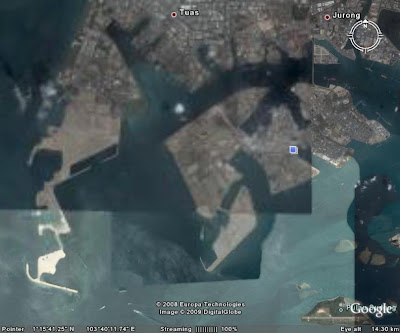 Aerial view of Jurong Island in 1996. 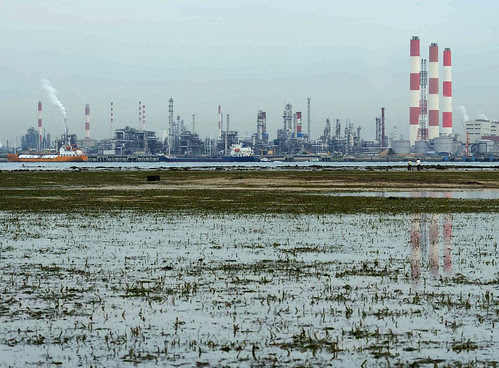 SINGAPORE: Jurong Island will be getting a second fire station by the end of 2009. When completed, the new Banyan Fire Station will effectively double the personnel and vehicle count deployed on the island to deal with industrial emergencies.

When operational, it will be equipped with Hazmat or Hazardous Material response capabilities.

It will complement Jurong Island Fire Station, which was built in 1999.

The island is a key installation that is home to numerous petroleum refinery, chemical and other industrial complexes.

Mr Shanmugam said: "Jurong Island has achieved significant developments over the years and is now recognised as one of the world's largest integrated chemical complexes which brings with it the challenges of managing such a complex operating environment."

He stressed that with the recent terrorist attacks in Mumbai, there is a compelling need to be vigilant and prepared to handle any situation.

With two operational fire stations, the Singapore Civil Defence Force (SCDF) is confident it can respond to an emergency at any location on the island within eight minutes. - CNA/vm

A SECOND fire station will be built on Jurong Island to handle the increase in activity on the island after its expansion.

In a press statement yesterday, the Singapore Civil Defence Force (SCDF) said that with the current expansion of Jurong Island, it is crucial to expand its operational capabilities to ensure optimal response and coverage.

Scheduled for completion in December next year, Banyan Fire Station will house about 100 SCDF personnel and a fleet of up to 15 operational vehicles.

The new station, together with the existing Jurong Island Fire Station, will be able to respond within eight minutes to any emergency on the island.

On top of being a regular fire station, it will also be able to respond to emergencies involving hazardous materials. This will be critical, given that the station's area of operation is one of the largest petrochemical hubs in the world.

Speaking at the Banyan Fire Station's groundbreaking ceremony yesterday, Law and Second Home Affairs Minister K. Shanmugam pointed out the need to stay focused on developing and sustaining the level of community vigilance and preparedness.

'The recent terror attacks in India underscore the compelling need for all to be constantly vigilant as these incidents can happen anytime, anywhere.'