I first noticed the mangrove trees that had settled naturally on Pulau Hantu's artificial seawalls in Apr 2009. They were already well established and were probably growing there for sometime. I returned regularly since then to keep track on them.
The different kinds of mangrove trees seen included common ones like Api-api bulu (Avicennia rumphiana), Perepat (Sonneratia alba), Nyireh bunga (Xylocarpus granatum), Bakau putih (Bruguiera cylindrica), Tumu (Bruguiera gymnorrhiza), Bakau kurap (Rhizophora mucronata). As well as those listed as Vulnerable on our Red List such as Tengah putih (Ceriops tagal) and Bakau pasir (Rhizophora stylosa).
The structure of the wall may have helped to allow the mangroves to settle here naturally. While the top part of the wall is sealed and smooth (the gaps between the rocks filled up with cement), the lower part of the wall is made up of unsealed rocks. Wow, perhaps if we built our seawalls with mangrove colonisation in mind we can have lovely green seawalls in Singapore!
Besides the big trees growing on the seawall, there are also lots of little mangrove trees settling in the lagoon. Hopefully, they will be allowed to grow up.
There are also little mangrove trees settling in the lush 'meadow' of Gelang laut (Sesuvium portulacastrum) that cover the high shore. It would be great to eventually have a little mangrove forest on Pulau Hantu! 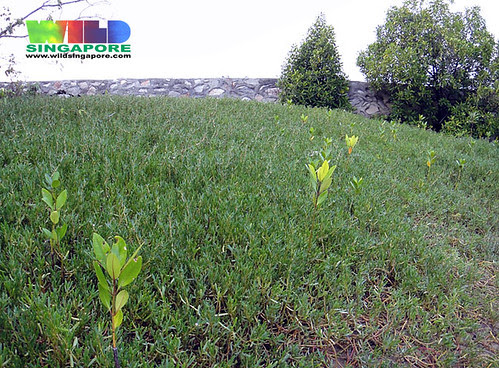 With a mangrove forest, Pulau Hantu will then be one of the few places in Singapore where a nice range of shore ecosystems exist in a continuum as they are meant to be. Mangroves, seagrass meadows and coral reefs!
Smaller mangrove trees are also settling naturally in the lagoons. 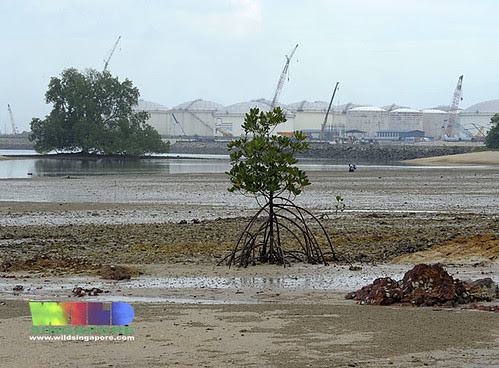 Mangroves had also settled naturally on artificial shores near the Marina Barrage. 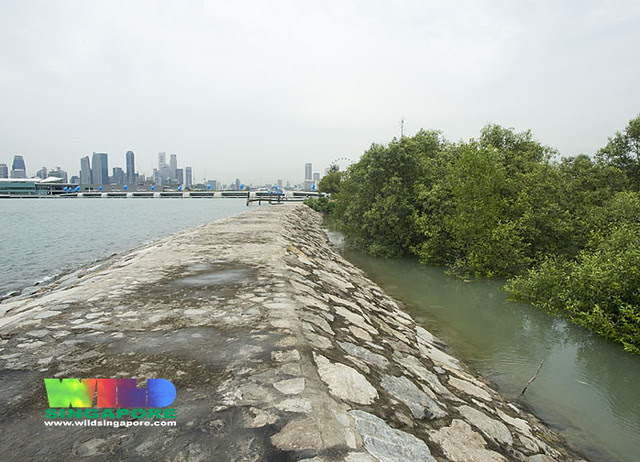 These photos were taken in Nov 2008. Shortly after, the area was off limits due to construction of the Marina Coastal Expressway, which ostensibly destroyed the mangroves. The different kinds of mangrove trees seen included common ones like Api-api putih (Avicennia alba) and Perepat (Sonneratia alba). This artificial shore also had seagrasses growing near the mangroves. 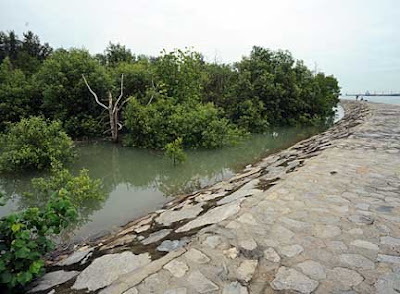 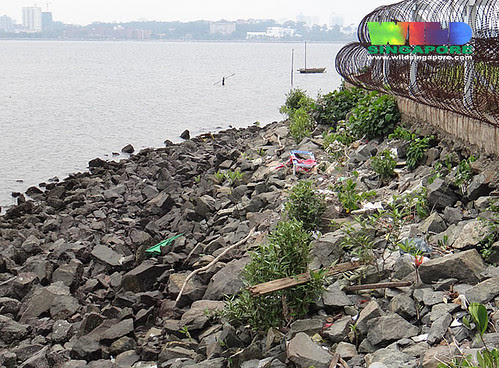 MORE photos of mangroves growing naturally on seawalls in Singapore in this wildsingapore flickr set.


Where do these mangroves come from? Where are the natural mangroves that produce the seedlings which settled on these artificial shores? What can we do to encourage similar natural regeneration on other stretches of artificial seawalls? These are indeed very interesting questions that hopefully can be explored in the future by people far more competent than I.

Why should we care about mangroves growing on our seawalls?

Mangroves and other natural ecosystems such as seagrasses and coral reefs can help maintain good water quality. They  can be living 'barriers' that may help mitigate impacts of rising seas and climate change: such as flooding, saltwater intrusion into freshwater supplies, and impacts of more severe weather. Natural and wild ecosystems that are self-generating and self-sustaining are relatively inexpensive to maintain and provide a wider spectrum of experiences compared to manicured gardens. They can be beautiful and provide recreational enjoyment. Easy access will allow schools bountiful opportunities for nature-related learning. I am sure there are many more advantages that I have not thought of!